Accueil/A loss of confidence hits the USD but is this a sign of things to come?/
USD

Chris Weston
Head of Research
Share
Maybe it was summer volumes, but on Friday the US bond market saw a wave of buying after the University of Michigan consumer confidence print fell 11 points to 70.2 – the largest monthly decline since April 2020.

The ‘Expectations’ survey saw the biggest decline since Dec 2012 and traders quickly looked at the prospect that the CB consumer confidence print (due 1 Sept) will be a shocker.

Many understand the two surveys have different focal points and that the Uni survey has just 439 respondents, but correlation seems to have influenced. Where if we go back to 1990 the R^2 between the two data points is 0.80 – that’s incredibly significant.

The sheer magnitude of the loss in confidence was behind the shock, as this is a survey that rarely gets a look in by the market, with perhaps the exception being of the 1-yr and 5-10yr inflation surveys. Is this consumer read the sign of things to come and economic fragility or one event that will offer traders the opportunity to buy USDs at lower levels?

In terms of market moves – the US 10yr Treasury fell from 1.33% to 1.27%, flattening the yield curve and taking the USD down with it. USDJPY had a strong move from 110.06 to close to 109.59 but is opening the new week on a flat note. The CHF was the strongest performer, and despite the funding currencies working well, higher beta FX worked well too. NZDUSD saw a move from 0.7015 to a high of 0.7048 and this pair needs attention this week because it would be a huge surprise if the RBNZ didn’t hike the cash rate by 25bp on Wednesday. In fact, you could see the NZD falling despite a rate hike if the outlook doesn’t meet what’s priced out the rates curve – On the week I’d take a modestly positive stance on the NZD, but I’d expect rallies to be capped into 0.7140.

AUDUSD hit a high of 0.7381 and the ceiling of 0.7415 remains for now. The vol matrix puts a near 70% level of confidence that the pair will be contained into 0.7440, while on the downside 0.7300 should hold up and any sell-off. All eyes fall on Thursday’s July employment data with consensus eyeing 46k jobs losses and the unemployment rate ticking up to 5%. The August minutes and wage-price data may get a look in too, as will a speech on Friday from RBA member Kent.

We may see some reaction to today's China data dump, with retail sales, industrial production, and fixed asset investment due at 12:00 AEST. A further slowdown is expected here, so watch industrial production with the consensus eyeing 7.9% from 8.3%. Weak numbers should increase calls for easing. 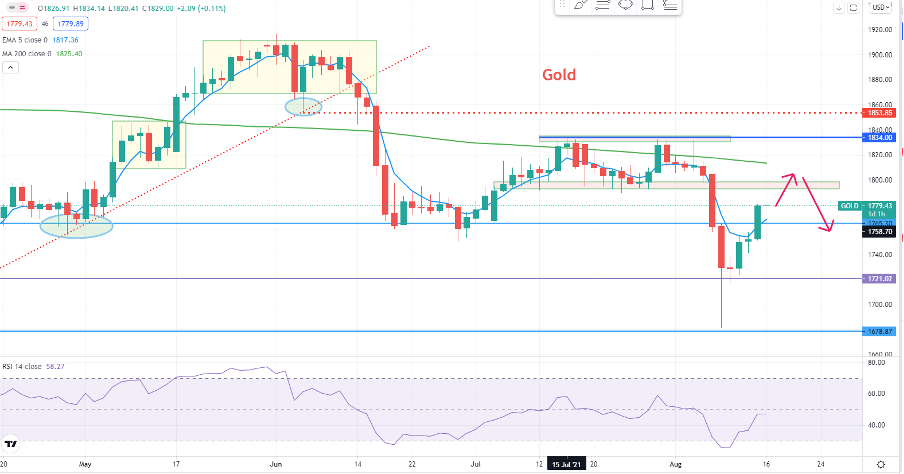 Gold also reacted well to the move lower in bonds and the USD, with the yellow metal rallying from 1764 to a high of 1780. US real 10yr Treasury rates falling 4bp to -110bp was a major additional tailwind. This was a bad move in real rates, as both nominal Treasury yields and inflation expectations fell concurrently, although nominal bonds fell more aggressively. In the Eurodollar futures (not the currency, but interest rates) we saw 7bp being priced out through to end-2024 and again this shows the markets worry about the consumer confidence data.

If real rates are headed lower, which looks a risk given the set-up, then Gold could squeeze into the former range low of 1795, perhaps the pre-non-farms level of 1800. We also see the 50-, 100-, and 200-day MA all dotted between 1804 to 1814, so there’s some wood to chop here. I’d certainly be looking for rallies on the week to be capped above 1800 and for levels to fade strength into here.

That said, I am not sure the data gets yields meaningfully lower given what’s on the docket, with US retail sales (Tuesday 22:30 AEST) and the FOMC minutes the highlights. Consider the bond bulls will still be somewhat hesitant to lump into duration ahead of the next NFP print (3 Sept), which promises to see the consensus close to 800k.

Good retail sales data say +0.2% or above, may arrest some fears of a fall out from the consumer numbers and see bond yields higher, and with it promote a turn higher in the USD, and a move lower in Gold. What the consumer numbers have shown us is that what we look ahead at for event risk may now change. I certainly looked at the calendar, saw the University of Michigan survey and had no real concern about holding exposures over it.

Equities are immune to all, it seems. I laid out a bullish case last week and maintain the risk of higher highs on low volume is true for now, but like everyone else, I am waiting for higher volatility. Can we see a breakout in the NAS100 this week, to join the US500 and US30? Perhaps one to keep an eye on but being short here is a costly trade. Let’s not forget the S&P 500 is higher for its seventh straight month. Despite the grind higher, we’re starting to see the emergence of a clear outperformance from defensive sectors, and maybe that’s a smoking gun, with the staples sector trading at all-time highs.

Here in Australia, full-year earnings season ramps up, with the ASX200 looking strong. Earnings have been at the backbone of the move in the index. This is not just liquidity, but consensus earnings expectations have been aggressively lifted, so that as price moved higher the forward multiples have remained steady. When we consider Aussie 10yr real bonds are -79bp and volatility are low, the ASX 200 on 17.9x earnings is not terribly expensive.

For the equity traders out there, I’ve scanned for stocks that are hot into earnings and I see these names.