Luke Suddards
Research Strategist
Share
A fairly muted week as we move to next week's Fed meeting. The UK continued to show a tight labour market and robust inflationary pressures. Let's take a look below.

The dollar continued its strength as the week began, picking up where it left off last Friday as we saw some longs squeezed out of the market. This week’s economic data line up was barren and given the Fed were in their blackout period before next week’s meeting there were no market moving speeches to be had. The strong start to the week was being driven by 1) shaky equity markets 2) higher yields and 3) some further tightening in Fed Fund futures all the way across the tenure, including the terminal rate. The debate has shifted from the timing of lift-off to now the size of hikes. A 50bps hike may be the shock to the system that dollar needs to push higher. I still remain in the bullish dollar camp, but a selective bull against the low yielders as opposed to the commodity currencies and those with equally hawkish central banks. My risk sentiment indicator of AUDJPY found some support mid-week, equity markets were higher and US yields were lower – a perfect brew for a softer dollar. The dollar is a tad softer going into the weekend with all focus now turning towards next Wednesday’s Fed meeting. With rich Fed pricing already discounted, I’d say the risks are tilted more towards the dovish side.

The dollar is back again at its former range support which is now acting as resistance (95.5) as well as the 21-day EMA. The RSI is back in the range too and hovers just below 50. Targets on the upside would reside around 96 (50-day SMA) and 96.5. On the downside, former support at 94.5 would be the one to watch.

The euro continued its slide lower into this week as the temporary driven position squeeze from last week ran its course. With 10-year yield spread differentials (US-Germany) continuing to move against the euro, the huge beat on the ZEW economic sentiment index couldn’t help stem the weakness. Interestingly inflation expectations from the survey are expected to decline over the next 6 months by a majority of survey participants. Despite this markets have now brought forward their bets on a 10bps hike to September and now see 20bps of hikes priced by end 2022. Wednesday saw a turnaround for the single currency as those rate differentials mentioned above moved in the euro’s favour, the German 10-year yield even finally managed to break above the 0% level. Additionally, equity markets showing green on the screen helped push flows away from safe-haven currencies. We also have the Italian presidential elections beginning on the 24 January. The BTP-Bund spread would be good to watch for market fears. The minutes from the ECB’s December meeting continues to point towards a growing division within the governing council as a result of upside inflation risks and policy settings in relation to asset purchases. The most influential members like Lagarde and Lane continue to look through what they believe to be temporary inflationary pressures. Their focus remains on medium-term inflationary dynamics and this will be heavily dependent on the path of wage growth (currently 1.5% YoY). The market continues to challenge the ECB’s credibility on rates guidance (an issue also raised in the minutes) as pricing indicates a 10bps hike by September and 20bps by December of this year. Too aggressive in my opinion. In my opinion, the earliest we’d see the ECB move would be late Q1/early Q2 2023. Flash PMIs are out next week.

EURUSD has given up its gains and now finds itself back in the range from last year. Price for now is being capped by the overhead resistance and and 21-day EMA. The RSI is just below the 52 resistance. Bulls, could look towards 1.135 and just shy of 1.15 while bears could have 1.125 in their sights.

Employment data was fairly solid with the unemployment rate falling again and below consensus, coming in at 4.1%. Wage growth did slowdown on the previous month’s figure but still met the market’s expectations. UK inflation hit a 30-year high (5.4% YoY), improving on last month’s figure and beating consensus expectations. The increase was fairly broad based too. Governor Bailey also spoke at a committee meeting, where he expressed concerns around inflation and a darkening outlook for their next set of forecasts. Retail sales out this morning were significantly weaker than expected, however, this is stale given the change to the virus outlook – Boris has announced the scrapping of Plan B restrictions. Speaking of Boris Johnson, he continues to come under pressure politically. A Tory MP defected to Labour this week and focus remains on the letters sent to the 1922 committee to trigger a no confidence vote. 54 letters (15% of the current Tory MPs would be needed) and then 180 MPs would need to vote against Boris for him to be ousted. The former is far more likely than the latter. The Sue Gray report will be key and should land next week. Rumours suggest though that Boris won’t be put in the crosshairs personally and rather a “culture” of drinking will be blamed. Pound still remains unperturbed by the political noise. Finishing off on Brexit news, European Commission Vice President Maros Sefcovic stated that negotiations are aiming for an end of February conclusion in order to be completed before Northern Ireland Assembly elections in May.

GBPUSD has fallen back into its descending channel and now finds support at 1.355 and its 21-day EMA. The RSI is all the way back to its 53 former resistance. Targets on the upside, reside around 1.36 which is the trend line of the descending channel and the 200-day SMA above there. On the downside, 1.35 would be key.

The Dollar yen is continuing its move lower as US 10-year yields slide. After a Reuters article published last week, led some to believe a hawkish surprise was in store from the Bank of Japan on Tuesday they would have been left disappointed. The risk assessment around inflation was modified from tilted downwards to balanced and inflation forecasts were upgraded very modestly. It’s no wonder Governor Kuroda communicated his resolve to keep policy easy and that there were no discussions around rate hikes. Inflation data out on Thursday evening certainly supported the easy policy settings expected to remain in place.

USDJPY pushed lower towards its support at 113.5. Price is still below the mini downtrend line I've drawn in. The bulls will need to see that line broken to the upside. The RSI is pointing straight down and still has a bit of room to move lower. Targets wise, on the downside 113.5 is one to watch, while further below would be 112.5. On the upside, 114.5 resistance would be important.

Gold has pierced its $1800 price resistance, but looks to be targeting this level on the downside once again. I have been rather surprised by the yellow metal’s resilience in the face of surging real yields. I still think it trades at too hefty a premium to its fair value based on real yields. Inflationary fears are helping keep gold fairly strong as well as equity volatility and question marks over the geopolitical environment. Another theory which has emerged recently, is that gold is being used as a “policy mistake” hedge. Basically, that the Fed slam the brakes on too hard and have to reverse, potentially cutting rates and once again benefiting gold.

Price is trying to stay above $1800. The RSI is finding the 62 level tough to overcome, where price has stalled previously. Targets would be $1860 on the upside and $1830 on the downside.

Brent started the week off strong as a drone strike by the Houthis led to fears over lower supply at a time when the market is already jittery over OPEC+ producers struggling to meet their expected quotas. Omicron is fading into the background and a slightly more tepid dollar is allowing crude to run harder. Inventory data out from the US showed a minor build which has probably led to some of the weakness we’re seeing into the weekend. One interesting factor which recently came across my radar is the large amount of call options above $90 a barrel which have been placed. This could lead to a delta hedge squeeze higher.

Price briefly moved through the uptrend line but is now desperately trying to remain above it. A trend break could point to some weakness given how hard price has run recently. The RSI remains around overbought. Where could price go on a move lower? $83 would be my first target. On the upside $90 is my level I'm looking towards. 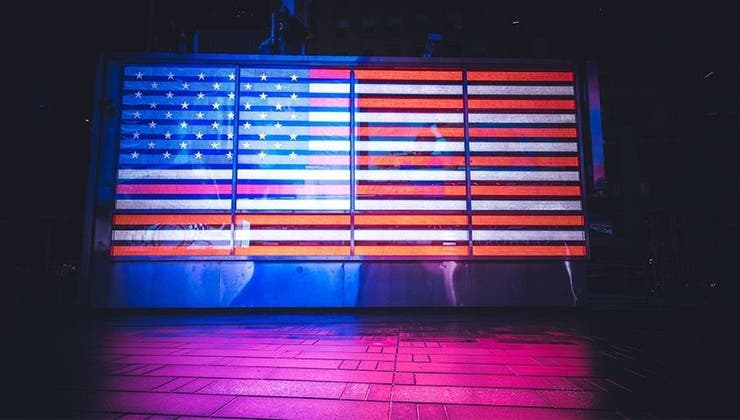 US Q4 earnings - get ready for some fireworks

It's all flow - US equity markets breaking down