Homepage/What next for UK politics and GBP?/
GBP

What next for UK politics and GBP?

Share
It's been a very interesting last few days with a rapidly changing political landscape. Read below to find out what happens next.

Boris Johnson’s reign comes to an end. The final straw seems to be his recently selected Chancellor Zahawi putting the knife in. Also, it was likely becoming very difficult to fill positions in his cabinet as no one wanted the job. The pound has popped higher, which does seem strange. The bad structural economic backdrop for the UK hasn’t changed and unless there is a massive fiscal boost (tax cuts and deregulation) coming then it shouldn’t really move the dial. I actually think it raises the risk of a general election slightly (on current polling Tories would lose), which would be GBP negative. The hope may also be a candidate who takes a softer view on Brexit (favourite Ben Wallace voted remain) and can keep Scotland from wanting to break away. The 1922 Committee will no longer need to push for the rule change to force a no confidence vote. We now look to the next potential leaders of the Conservative party and Prime Minister. The candidates in poll position (ordered by highest chance at bookmakers – very fluid and fluctuating constantly) are Ben Wallace, Rishi Sunak, Penny Mordaunt, Liz Truss and Sajid Javid. Given we now know the favourites let’s take a look at how the process works to elect a new leader.

The question is when will the leadership process begin – Tuesday or after the summer recess (21 July – 5 September) in September? A change in September could work well with the Conservative party conference in October and the budget in November. What are the implications for the pound going forward? Not much really, unless as mentioned above we see a significant loosening in fiscal policy combined with a more hawkish Bank of England (BoE). Sterling still trades like a typical high beta risk currency – equity down; GBP down. General risk sentiment and BoE rate path policy are still the main drivers for the pound. The political risk premiums which could hurt the quid are a hard-line Brexiteer (vice versa if a remainer is made PM) getting into power or a snap election being called. Break-up risk from Scotland is also a factor to keep on the radar.

Cable is trying to recover from breaking below the mid-June lows of 1.195. 1.215 is the next key resistance level to watch. The 21-day EMA is hovering a tad above there. The RSI has plenty room to push a rally in price. It also made negative divergence which likely aided in the oversold bounce we’re seeing play out. On the downside, the next support comes in at 1.15 (covid lows). 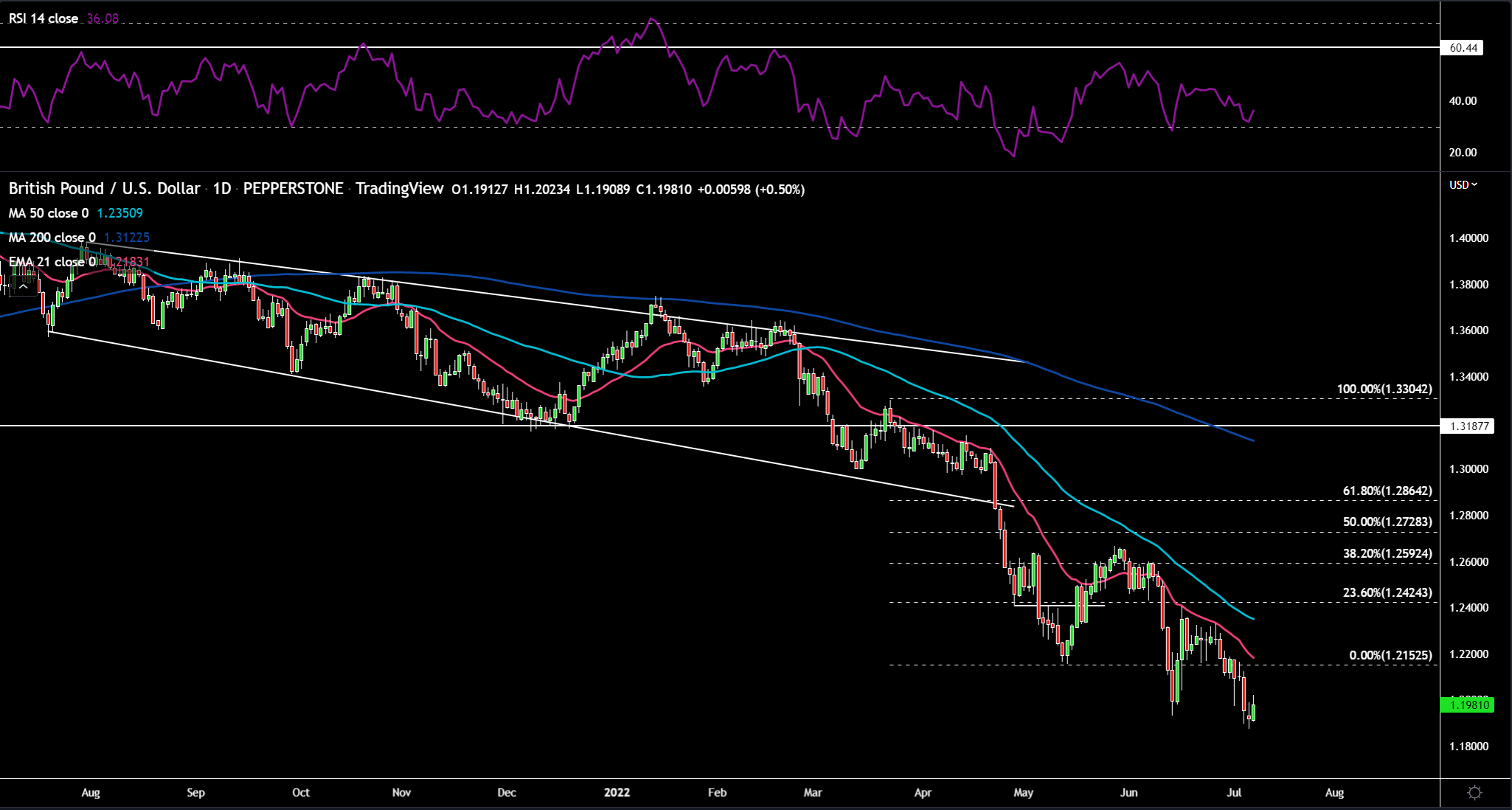 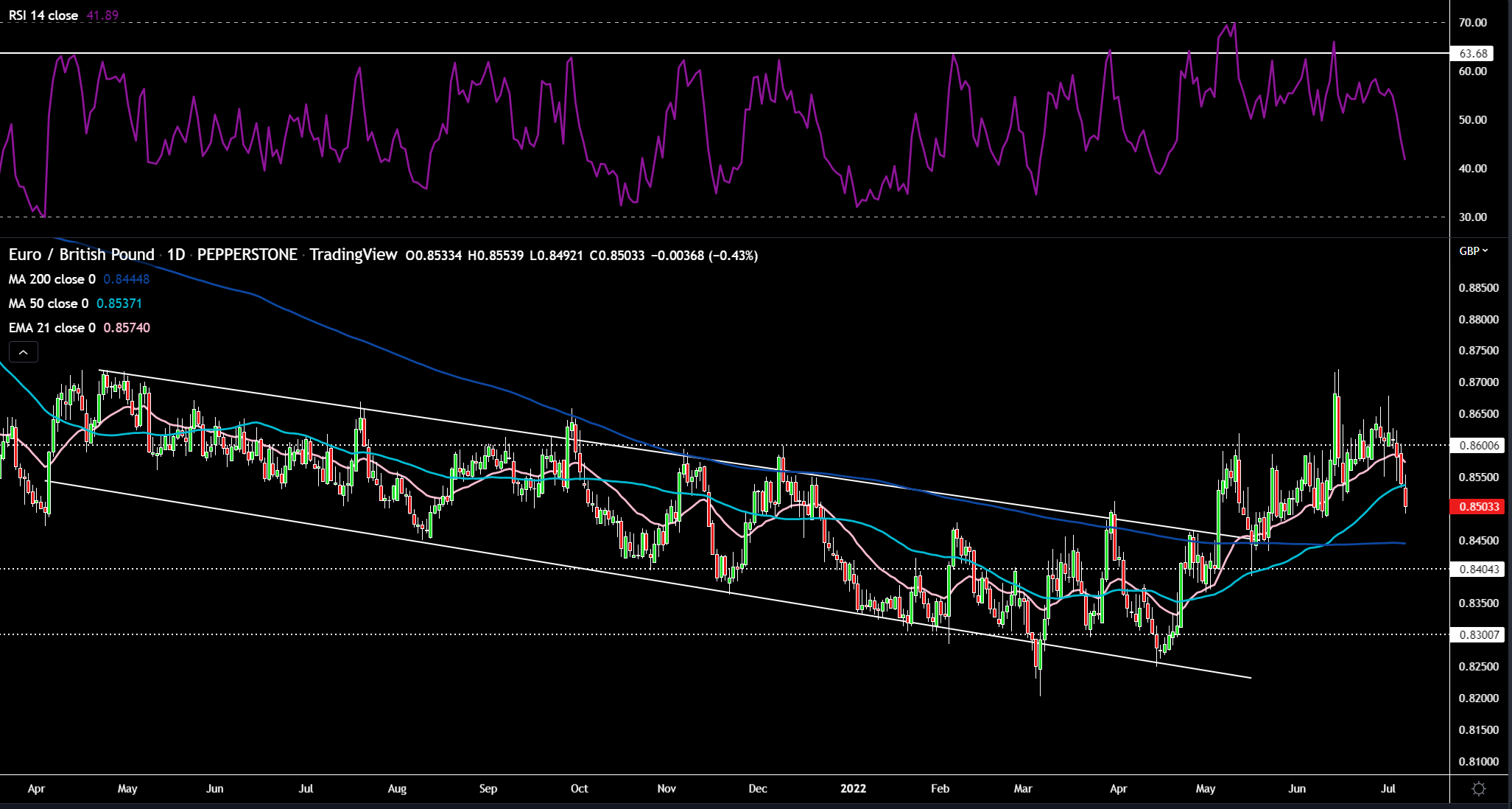 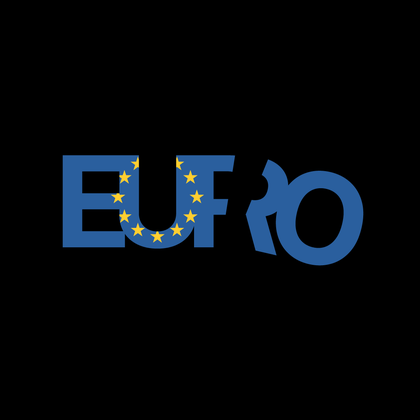