Homepage/A traders week ahead playbook - are the Fed behind the curve?/
ForexAUD

A traders week ahead playbook - are the Fed behind the curve?

Chris Weston
Head of Research
Share
The inflation debate is still the hottest ticket in town – it's promoting higher volatility (vol) in rates markets and bonds, with a small pick-up seen in FX volatility (vol).

Equity markets are still, however calm with the VIX at 16.3% with falling demand to hedge potential drawdown. This divergence in implied vol across asset class remains a key talking point, but there's no doubt that the boat is not yet tipping with correlations among stocks almost at zero and cyclical sectors (of the S&P 500) still holding up well vs defensives.

If the US high yield credit spread accelerated above 273bp above the US 10yr Treasury (currently 267bp), then again, I think equities would be a better sell.

Now this dynamic may change, especially if the debt ceiling comes into play in mid-December, but what are the signs to look for over a medium-term?

A higher vol regime will make conditions far more prosperous for equity short-sellers and change the dynamics in FX markets, with renewed downside demand for high beta FX (AUD, NZD, CAD, and MXN). The USD will turn from one being driven by pro-cyclical forces – i.e. relative economics and rate settings - to one sought for safe-haven demand, with the JPY also benefiting. 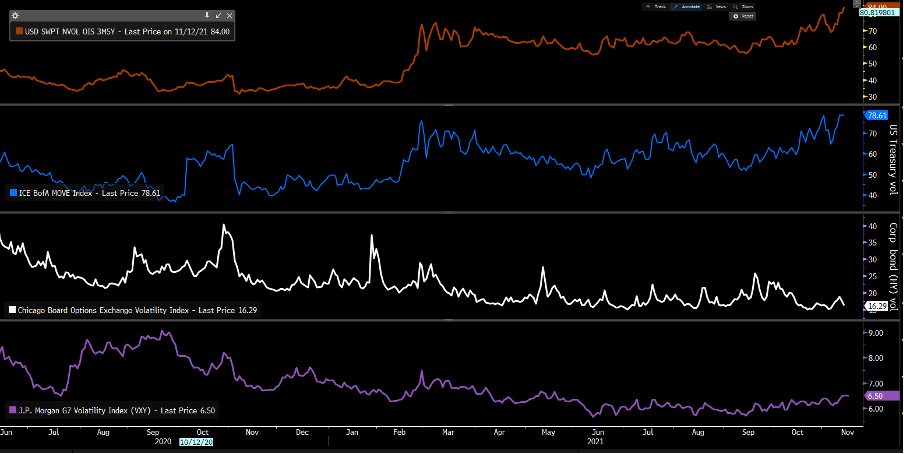 Firstly, I would start with the rates markets – we can see a bit over two hikes priced into US fed funds future by the end-2022, with rates ‘lift off’ starting in July. I think if we priced in over 3 hikes in 2022 it could become more problematic for risk assets. Looking out the Eurodollar rates curve, we see a reasonably aggressive pace of hikes in 2022 and 2023, but then the pace markedly declines with barely anything priced for 2024 and 2025. In essence, the market sees hikes as front-loaded suggesting the Fed are in fact not dramatically behind the curve – a factor that is one of the core debates in macro.

We see an 89bp differential between the Eurodollar Dec 2025 and Dec 2022 futures contracts – if this moves back to say 140bp then this could be the market feeling that inflation is going to be a far greater problem and rate hikes are being more aggressively priced throughout the next four years.

Also, if the US 5y5y forward rate (the markets view on the ‘terminal’ fed funds rate – now 1.94%) pushed above 2.50% (the Fed’s long-term dot plot projection), again, I think this would be a trigger for far higher volatility and risk aversion.

A move to 2.50% won't play out overnight, if at all, and we’ll need to see real evidence that the US labour force participation rate is not going above 62%, while unit labour costs stay elevated and supply chains heal at a glacial pace. However, if the forward rate was eyeing 2.5% I think this could be a factor many strategists will point to for the VIX to sustain a move above 20%.

The Gold market is perhaps one of the more classic signs of inflationary concerns – this is a play on US ‘real’ (adjusted for inflation expectations) rates though, where the combination of a better economy in Q4, record negative US real rates and rising inflation is one the Gold bulls will seek out precious metals. The Fed may need to promote a move higher in real rates, but the knock-on effect is they risk the stock market finding sellers – notably in growth stocks. A downside break of -2% in 5yr US real Treasury’s could be the trigger for Gold to push into and above $1900.

Many debate the linkage between inflation expectations and the real economy. I’m not sure it matters when people are feeling the effects for themselves and much has been made of the recent NFIB small business survey and Friday’s University of Michigan consumer sentiment survey, which hit the lowest levels since August 2011.

Clearly inflation is not popular and is increasingly the key political issue – I’d argue if real rates break to new lows this could accelerate inflation hedges, while a move through 2.7% in US 5y5y inflation swaps (currently 2.55%) would also play into the idea that perhaps the Fed, at the very least, need to radically reduce the pace of QE in the December FOMC meeting.

Clearly, the US Nov CPI (released 11 December) is going to be a big event for markets to digest and the signs are price pressures will continue to build from the current 6.2% YoY pace.

Crude and gasoline also play a key role in shaping sentiment – Senate Majority Leader Schumer has called on President Biden to release an element of the US’s Strategic Petroleum Reserves (SPR). This is a factor that has been talked up since OPEC rejected the US’s calls to increase output by more than 400k barrels. However, the introduction of Schumer into the mix just adds fuel to the fire and this may weigh on Crude.

So, a few indictors I'm watching that could spur the market into a belief the Fed are genuinely behind the curve – I’d argue the market isn’t there yet, but if the factors I mention don’t show evidence of dissipating then we could see forward rates move to levels that could highlight the Fed need to act far more intently – that's where risk dynamics could markedly change. 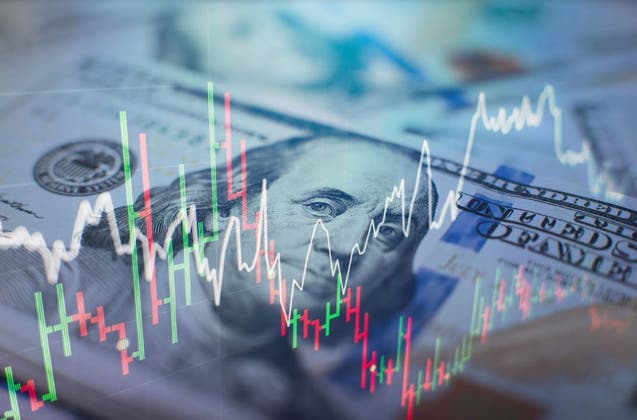