Homepage/A traders playbook for the week ahead/
US

Chris Weston
Head of Research
Share
Unlike last week, crypto has had an uneventful weekend.

Although, we’re seeing a few sellers in Bitcoin and the technical picture is looking far more appealing for the shorts with price firmly trending lower and rallies quick to be faded.

For those wanting to take a more relative approach, short Bitcoin and long Ethereum remains a compelling pairs play. If wanting to play the crypto space and look for relative outperformance, this long and short strategy may re-establish itself.

In the world of fiat, the USD broke to new lows in the run from 93.43 (31 March) on Friday and while technically oversold, can easily remain so. EURUSD has been the natural driver of the USDX, with a somewhat explosive move to the upside on Friday, taking the pair just shy of 1.2100. I focused on a breakout of the cloud in EURAUD on Friday and that is still to play out, although the AUD looks supported - EURJPY could be an alternative and a closing break of 130.50, and the ceiling we’ve seen since Mid-March, takes the pair to the highest levels since October 2018. Happy to wait for confirmation of the closing break and then look to add longs when the flow of capital increases the conviction.

Eyes on the April FOMC meeting

This week’s FOMC meeting (Thursday 4:00am AEST) and Powell press conference is not expected to be a volatility event for traders, but for macro watchers, it's about nuance – recall the Fed have been running with the idea that “it is likely to take some time for substantial progress to be achieved”. “Substantial progress” being the marker in economics by which they will firstly reduce the pace of QE (bond purchases) at a probable pace of $15b a month and secondly, after a period of reflection, look to hike interest rates. The probable situation is they remove the word “some time” at this meeting and acknowledge that the economy is on the right path, but that’s about it.

Looking forward my own view is we get an announcement of tapering from the Fed in August – at the Jackson Hole Symposium – and the probability is this will mark the start of some far tougher and volatile times in financial markets. Consider we’ll also be thinking about the RBA tapering its own QE program, as well as the RBNZ and Norges Bank – and the June ECB meeting could be lively too. With regards to Fed policy and there's water to pass under the bridge and progress requires not just the next two payrolls (the next on 7 May) being in excess of 1m net jobs created - but the demand for the vaccine in the US to increase suggesting herd immunity is coming and we see the horrific COVID spread in various EM countries coming under some sort of control. 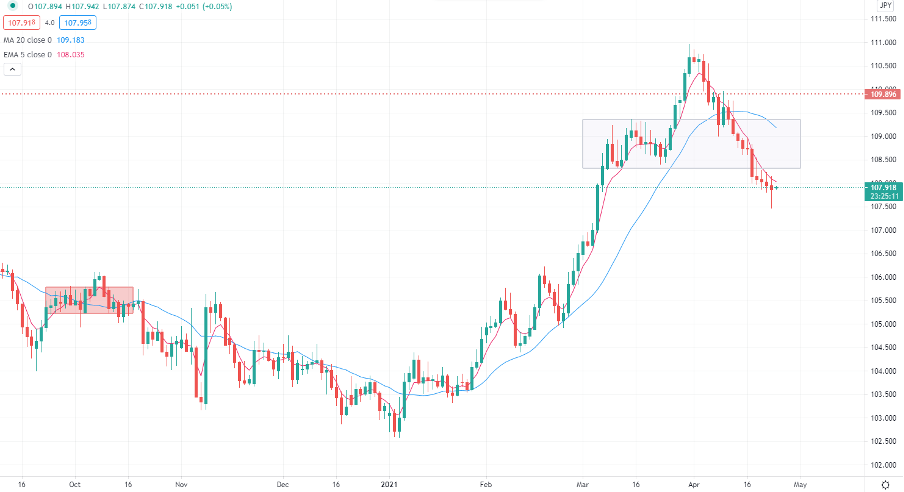 USDJPY gets a focus and while the trend is lower, on the daily there seems a lack of conviction to push price further with any kind of pace - as seen in the past four days where price closed near where it opened. A reversal to the upside, however, will require US Treasuries to sell-off again and yields moving higher – a fate I see as a growing probability. USDCHF below and through 0.9128 looks interesting for a continuation of the bear move. 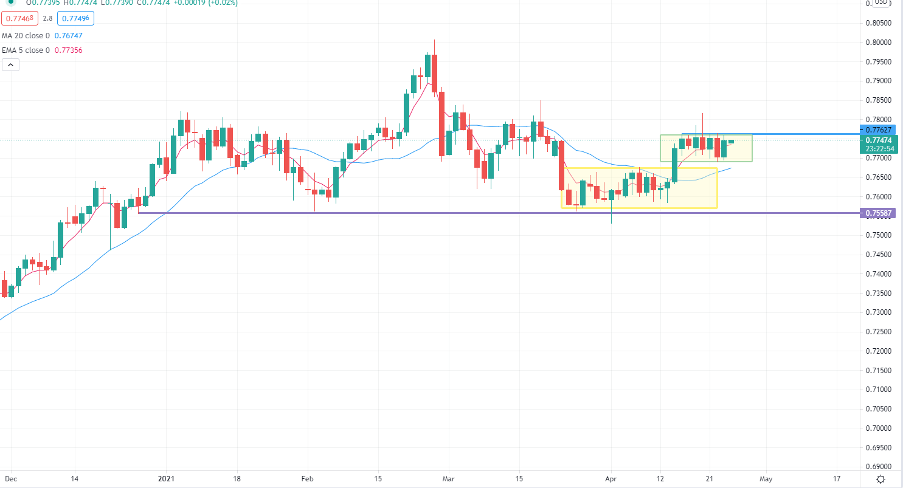 AUDUSD gets a strong look too, with Q1 CPI due on Wednesday, with the consensus calling for headline CPI of 0.9% QoQ (1.4% YoY) and trimmed-mean CPI of 0.4% (1.2%). Again, not enough to trouble the RBA in any form, but with the moves in housing, food prices and input costs more broadly, that inflation rate is only going one way. AUDUSD has been consolidating and has a barrier at 0.7761 – so a close above here would be indicative that the AUD bulls have seen what they want to see and ready to make a push back above 78c – a rally in the CNH (Yuan), taking USDCNH lower would also be helpful for the AUD upside. But the RSI is mid-range and needs work and 20-day realised volatility is sleepy at 7.2% and this is keeping implied volatility suppressed.

New highs to be seen in indices ahead of big tech earnings?

On an index front equity, US markets pushed higher on Friday led by small caps, with the Russell +1.8%. The NAS100 pushed up 1.1% and is threatening a push for new all-time highs. Tesla report after today’s cash close and then we get a suite of mega tech due this week including Alphabet, Microsoft, Twitter, Apple, and Facebook – but we also see Visa, Boeing, Merck, Caterpillar, Exxon, and Chevron report. A wild week for earnings, so one questions if they will become more impactful to the broad index given expectations of a solid beat is elevated and the companies need to blow the lights out, which I am sure they will.