Trader thoughts - the rise of risk FX into US payrolls

Chris Weston
Head of Research
Share
Another risk-friendly day without any real fireworks – EU equities closed modestly higher, with the FTSE100 gaining 0.2%, but a 0.2% gain was enough to outperform.

On the ETF side, URA ETF (Global X Uranium) has come up on a couple of my scans, having rallied 33% in the past 9 sessions and looks the goods at the moment – it is up for five straight days, so I am sure a few will be looking at shorts for a slight mean reverting move, but it's like standing in front of a train at the moment. Anyhow, one for the radar, especially with 1.93m shares traded on the day, the highest volume since 14 June and 3.6x the 30-day average.

The market is seemingly running a progressive short USD position into today’s non-farm payrolls (NFP), partly as a result of poor Homebase employment data, but also the ADP payrolls were well below expectations in the prior session. While the consensus for today’s NFP sits at 725k and I hear the so-called ‘whisper’ number sits at 715K, I’d argue the market is positioned for around 600k. I’d also argue a number sub-550k should see calls for the start date for Fed tapering from a few analysts is likely pushed out to 2022.

We’ve seen the DXY move from 93.72 and through the 13 August swing low of 92.47 – this now puts the 30 July low of 91.78 in play, but I’d be looking to fade weakness here on the day. EURUSD has naturally been at the heart of the move with its push into 1.1900 and the 30 July highs – this is not just a USD move, but a play on next week’s ECB meeting, with some talk the central bank could signal a slower pace of asset purchases – this effectively cements a view that when the QE juice stops flowing in March 2022, they will not pull out another round. 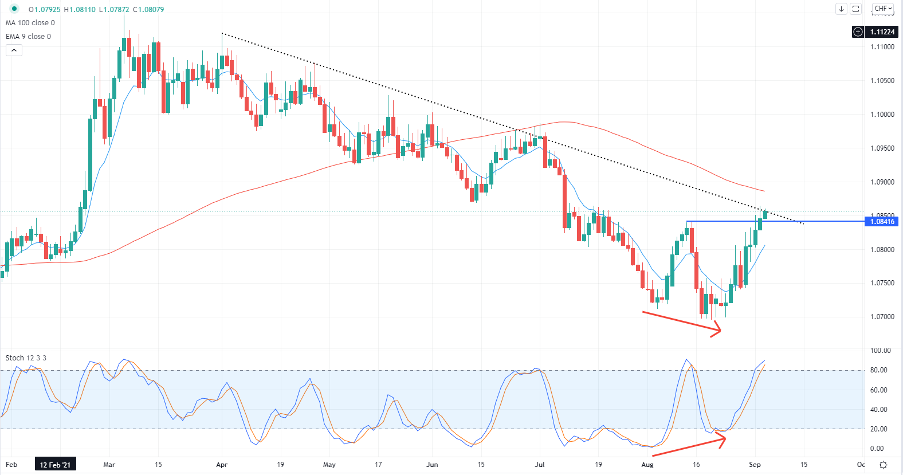 EURCHF is a good one for the radar here, as price has broken out and is now testing downtrend resistance. On a break, I’d be fading this into the 200-day MA, for a re-test of the former trend – 74% of open positions held by clients are short, so clearly there would be some believing this EUR move has gone too far. Especially given the lack of movement in German bunds, which tend to drive the funding currencies.

Arguably the trade to watch though has been the higher beta FX play. The ZAR has been strong of late, moving from 15.33 to 14.49, but seems to find the 100-day MA hard to break – are we seeing a dead cat bounce or ‘value’ to buy USDs here? US NF Payrolls will obviously dictate. The NZD has been the star of the session closing up +0.6% and breaking above 0.7100 and the highest levels since 16 June - a solid rally from 0.6805 on 20 August. AUDUSD is threatening a break of the July/August range highs and a weekly close above 0.7400 would get a few excited – with the RBA meeting next week, the debate around whether the bank suspends tapering QE to $4b/week or continue to plod on. 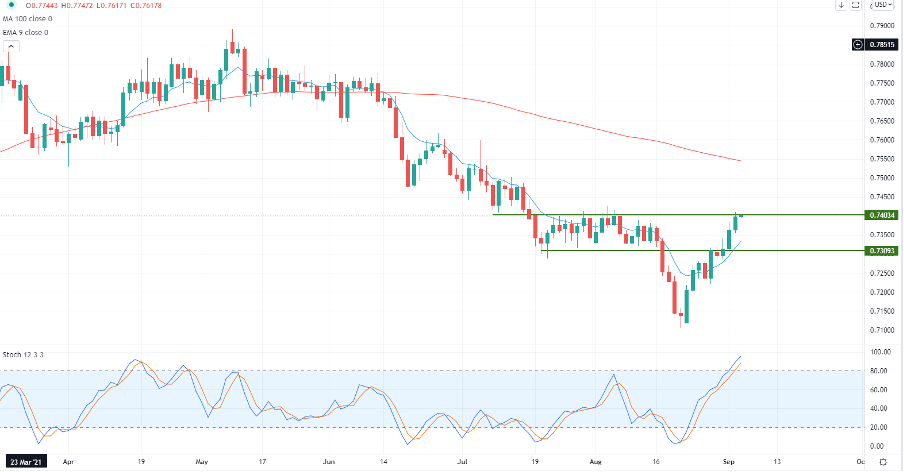 The move in the AUD has clearly caught a few by surprise, but we’re seeing stability in Chinese equities, relative nominal and real rate differentials are working in favour of AUD appreciation and the change of tact from VIC and NSW state governments, to learn to live with COVID if vaccine rates are high enough could be a game-changer. Let’s not forget both leveraged accounts and asset managers are short AUD in some size, and with a weaker USD it's not hard to see why the AUDUSD has rallied 4.2% off its lows.

Good luck to all trading payrolls and you can trade the potential opportunity with Pepperstone.