Luke Suddards
Research Strategist
Share
This week was a bit more muted for markets with less economic data on the calendar and filled with lots of Fed speakers. Let's take a look below at what you need to know.

The dollar is recovering from its bruises last week probing near 99. The Russia Ukraine situation remains deadlocked with two new developments creating some anxiety - an invasion from Belarus and a chemical attack.

The Fed is becoming positively hawkish, earlier in the week Barkin, Bostic, Bullard and Powell all expressed their support for a 50bps move. The Fed’s Daly even sees May being a 50bps hike meeting potentially. The takeaway from all the Fed speakers this week seems to be - economy strong enough to handle more aggressive tightening in policy i.e. a soft landing and that the committee is becoming increasingly hawkish. 50bps hike is now not just the view of one or two members. Daly "was" a big dove.

8.5 hikes are now priced in for the December Fed Fund Futures contract. 75bps are priced for May and June, implying one of the next two meetings needs to see a 50bps hike. Morgan Stanley now look for the Fed to raise rates by 50bp at both its May and June meetings. US 2-year yields have also spiked above 2%. The problem though is, the faster the hiking cycle is priced the more rate cuts down the line are being priced. The spread for December Eurodollar contracts for 2024 and 2023 are now substantially below the zero line. The 3s10s, 5s10s and 7s10s curves are all inverted with the famed 2s10s also heading in that direction which typically is a harbinger of recession. However, Powell has told the market they are putting more focus on shorter term yields such as 2s5s 3m10y. The implications of this is that they won’t see an inversion of the 2s10s as a reason to ease off on the tightening accelerator pedal. The market seems to be only waking up to the hawkishness of the Fed now, a sort of delayed reaction to last week’s new found hawkishness.

The Fed are in a very difficult position. Their tools have an impact on the demand side and energy price shocks fall under the supply side. He’s laser focused on inflation (Powell - price stability is necessary for strong employment and growth) and believes the economy can withstand the Fed slamming on the brakes. Inflation breakevens continue to soar and show little signs of slowing down. Essentially, there’s two ways this can play out – 1) the energy price surge dissipates and inflationary pressures start to moderate allowing a less aggressive tightening cycle 2) there is no respite and he has to slam the brakes on very hard artificially causing a recession leading to demand destruction (whether they have the bottle to do that is another thing).

Flash PMI data out from the states was solid with big beats across the board and improvements on last month’s figures. The service sector performed particularly well given the loosening of hospitality restrictions. Price pressures remain tight as raw material and energy costs light a flame under inflation. 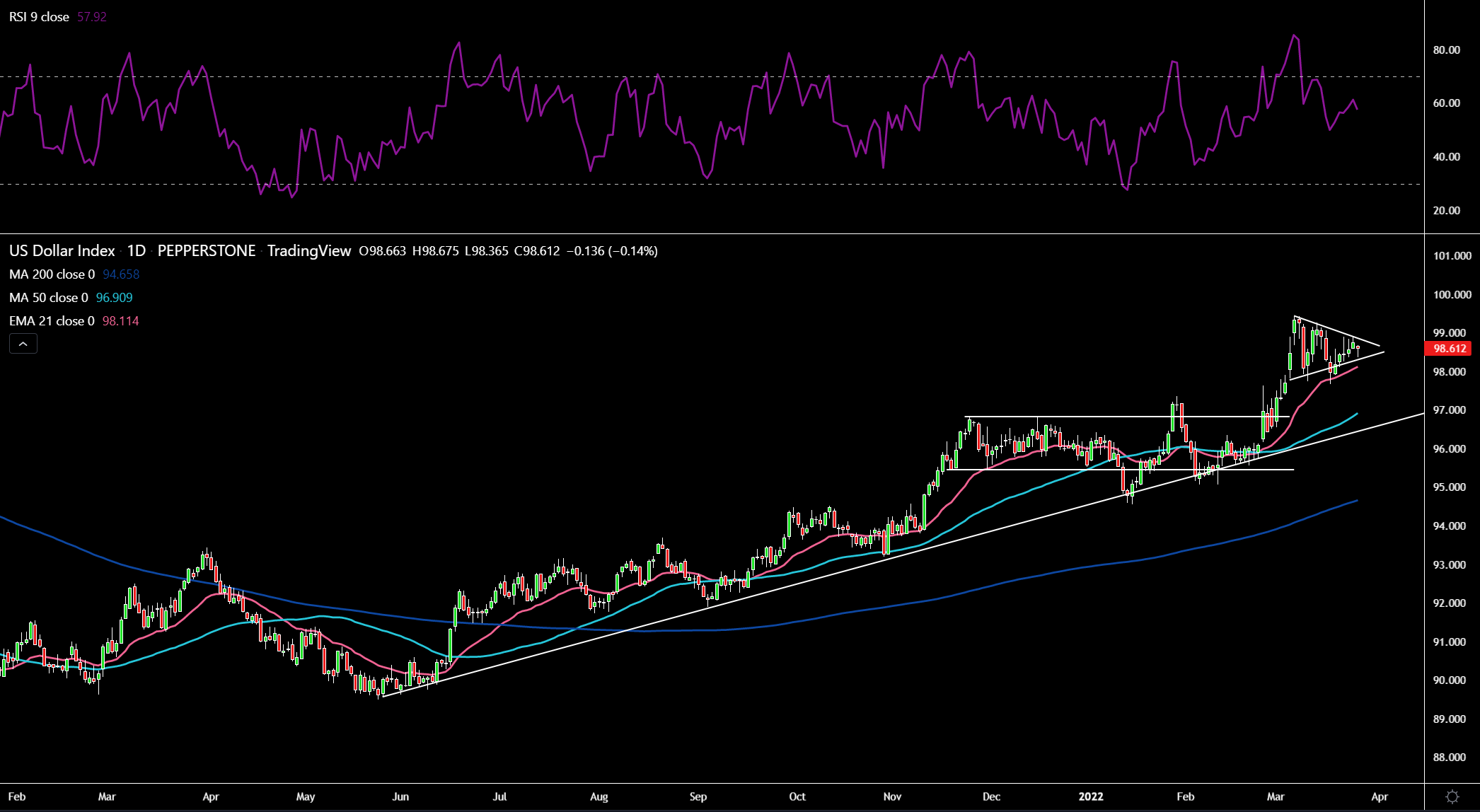 DXY continues to exhibit an uptrend after last week’s retracement to the 21-day EMA. 99 is the target to hit on the upside and 98 on the downside. That seems to be the bounds which DXY is fluctuating within currently. A mini triangle pattern seems to have formed. The RSI is around the 60 level and not providing informational value at present.

EUR/USD remains contained below its 21-day EMA. ECB heavy hitters such as Lagarde and Lane haven’t moved the dial for euro crosses. Speaking of the ECB, the latest German wage negotiation (Postbank) indicates an average pay rise of 1.7% over 3 years. Those 2nd round effects which would prompt policy action are currently lacking (this was confirmed by ECB member Elderson). The ECB’s Visco also alluded to the fact that the ECB considers the exchange rate when making decisions. We also heard from the ECB's Schnabel yesterday who threw the conclusion of the APP into doubt as she referenced a deep recession catalysed by the Ukraine invasion as being a potential reason to extend APP.

European energy prices continues to pose headwinds for the euro with natural gas surging on Wednesday as Russia is requesting hostile nations pay for energy exports in roubles. Another factor for the euro is the rapid repricing in US yields, opening up spreads and preventing rallies in EURUSD. Although German and eurozone PMI data was better than expected and indicated output continues to expand. The numbers were down on last month’s number. This trend is likely to continue given the invasion fallout effects. Consumer confidence has already been smashed as a result, falling to -18.7. The German Ifo expectations out this morning fell off a cliff to 85.1, well below the forecast of 92 and the previous month of 98.6 – an ominous signal for the next couple of months. 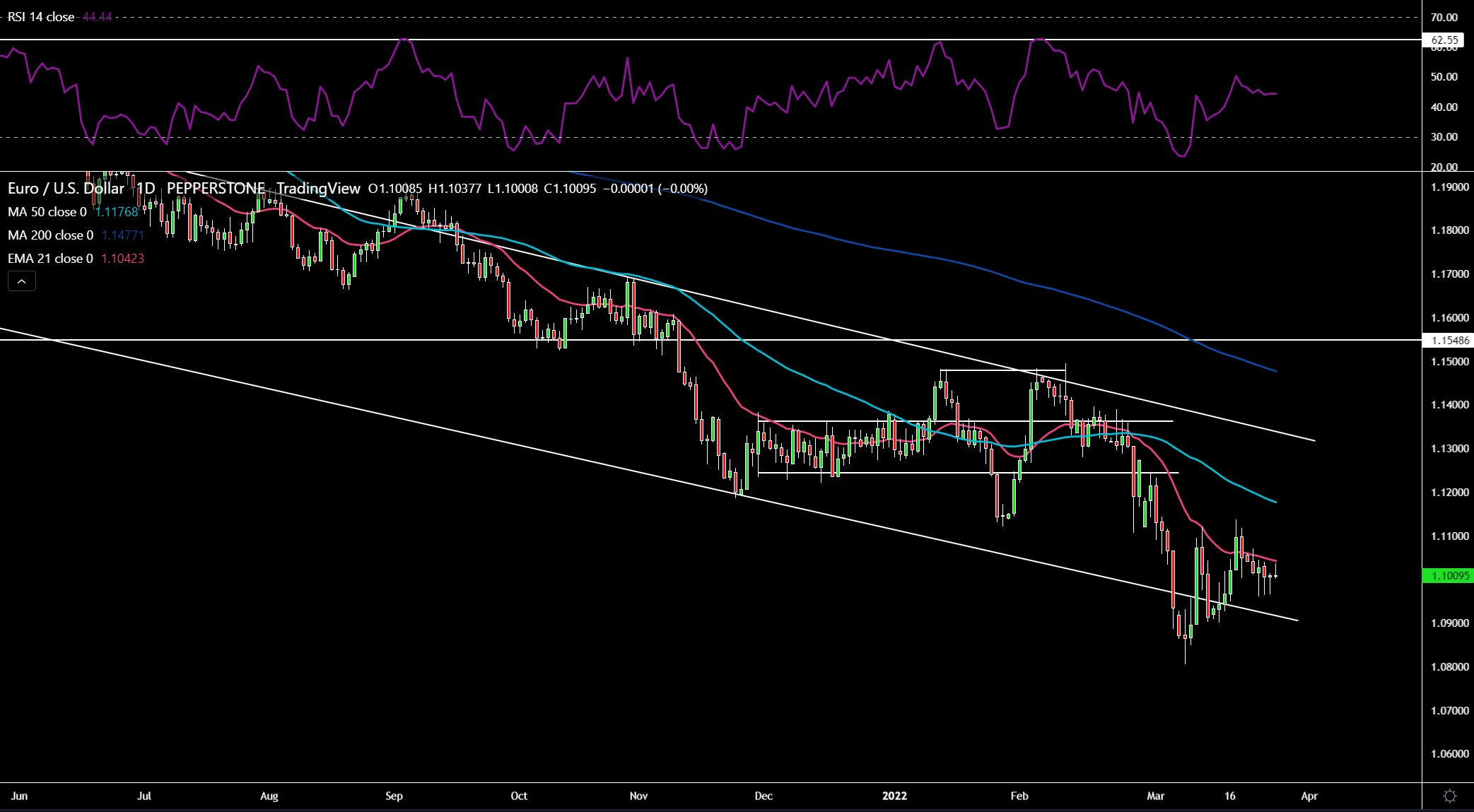 GBP saw a big surge through the 1.32 level on Tuesday as sentiment to high beta currencies swiftly turned in their favour. UK inflation data continues to outperform expectations and previous month’s figures at a headline and core level, 6.2% and 5.2% respectively. This is the highest level since 1992 and continues to be pervasive among a number of different components. Besides causing policy issues for the BoE and squeezing the UK consumer, circa £500bln in debt payments are inflation linked which would make servicing that debt more expensive. Following the inflation print we had Chancellor Sunak deliver the spring budget statement, so what were the main takeaways? 1) The threshold at which national insurance has to be paid has been raised by £3000 2) fuel duty was cut by 5p a litre for one year 3) a 1% reduction in the basic rate for income tax in 2024 4) Will cut tax on business investment in Autumn budget as well as potentially provide further energy bills relief. The 2022 GDP forecast was lowered from 6% to 3.8% and inflation revised higher and is set to average 7.4% over 2022. UK public borrowing in 2021-22 is expected to be £128bln, £55bln less than predicted in October. This obviously means less supply of gilts hitting the market and in turn lower yields. I think the sell-off in GBP was probable a response to two things 1) lower yields and 2) the budget wasn’t enough to support the economy and UK consumer.

Flash PMI data was on the whole was relatively solid with the composite and services components outperforming, while manufacturing disappointed. The loosening of restrictions saw services rebound rapaciously and offset war drags. However, expectations point to slower growths in the months to come as soaring energy prices, lower confidence and supply disruptions weigh on the UK’s growth profile. Still think £STIR markets have got way ahead of themselves with 2.2% now priced for the BoE’s policy rate by December 2022. This poses a risk for GBP as the market realizes this and reprices rates lower. 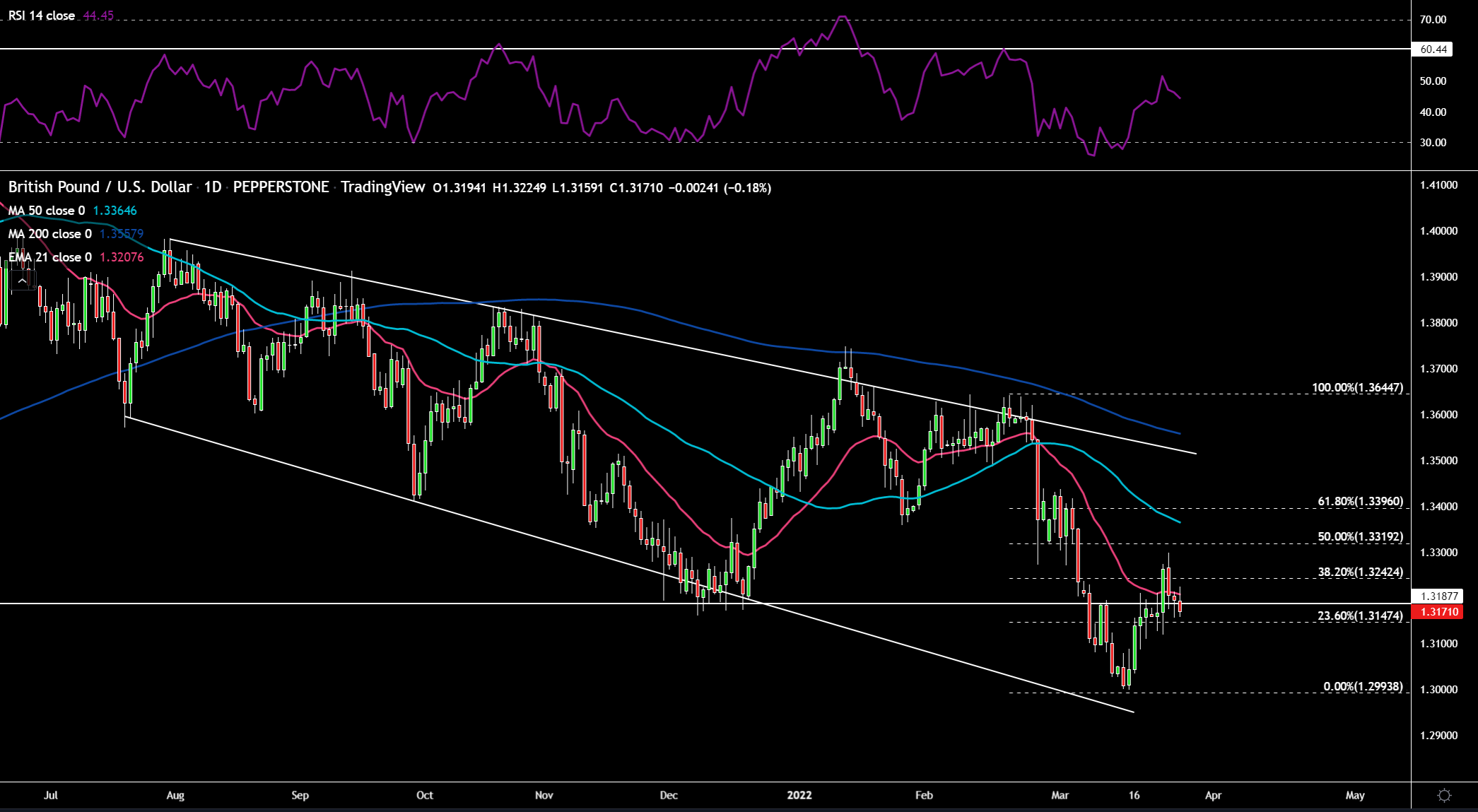 GBPUSD had a flush through the 1.32 level, but has now been sold lower to the mid-1.31s. The 21-day EMA on the upside is capping gains and the 38.2% Fibonacci level. The 23.6% Fibonacci level will likely provide some support and it coincides with the 1.315 round number. Again the RSI is not really providing us with any clear direction.

USDJPY remains the purest expression of monetary policy divergence. It has broken the key psychological level of 120 and still continues to push higher. What’s driving these moves? The Fed moving to a much more hawkish policy setting is driving US yields at the short end and long end higher. BOJ on the other hand have their foot still stuck firmly to the accelerator. The BOJ's Kataoka stated that he sees no prospect of BOJ tightening policy and that a weaker yen is positive for Japanese economy as a whole. Their current account through the trade channel is eroding given their large oil import requirements. This begs the question could we see 125 tagged. For perspective 2015 saw the BOJ defend the 125 area to stem further currency deprecation. We’ll have to keep our ears open for any rhetoric in this regard. 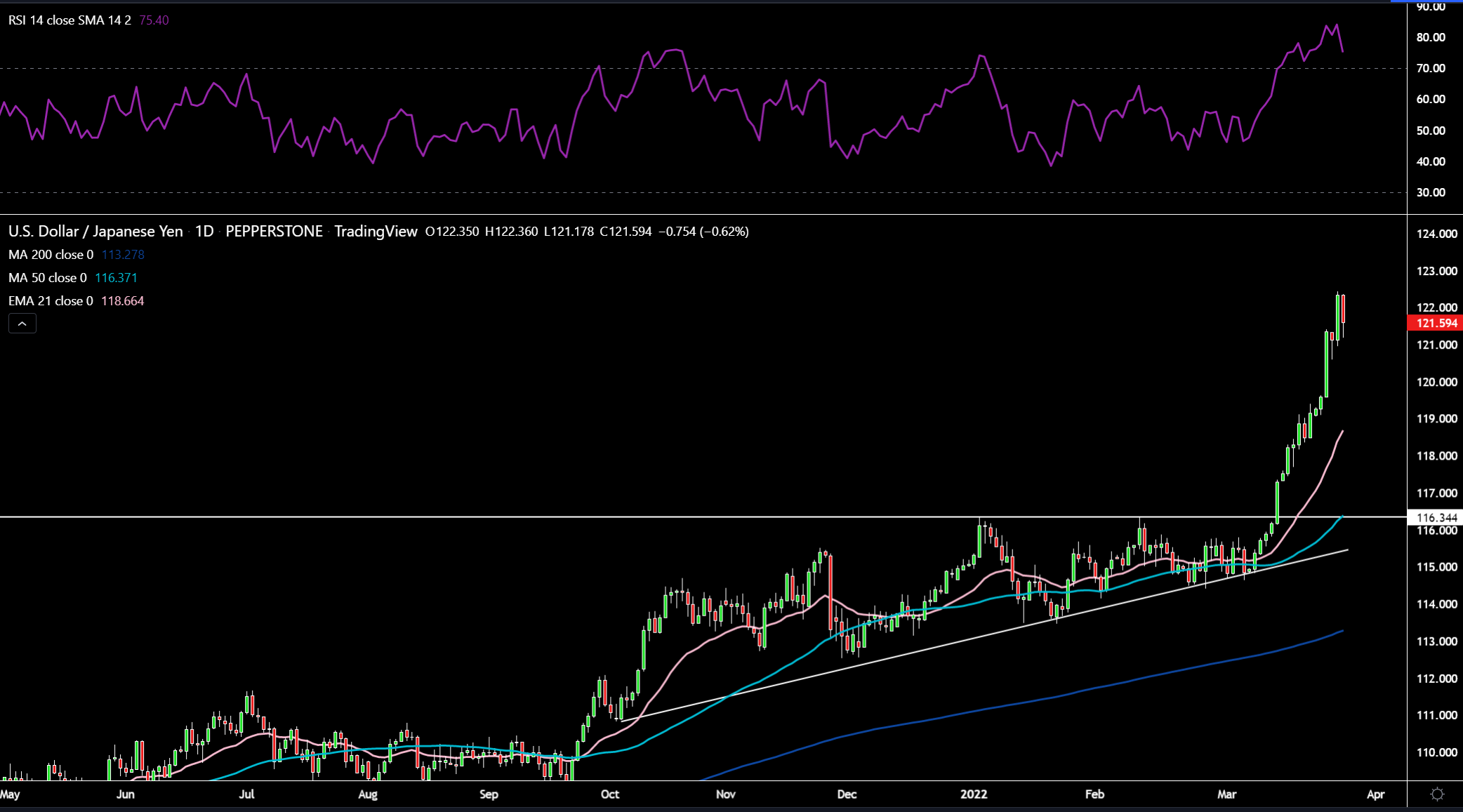 Looks like we could see a breather here on USDJPY and a modest pullback in the near term. Although not definitive, the RSI became very overbought and diverged significantly from its moving averages which encourages mean reversion. So what are the levels to watch? On the downside, 120 would be an interesting level to monitor from a psychological perspective. On the upside, the previous high of 122.4 would be good to watch with a breach of this potentially lining up the 125 level.

Gold began the week in the red as US bond yield climbed after Jerome Powell and the rest of the Fed’s hawkish commentary. However, gold continues to be pulled in either direction by rising yields and geopolitical ructions. It also continues to be seen as an asset to have in the portfolio within an increasing stagflationary word. Gold could also be deriving some strength from rumours about gold being used as currency to pay for certain Russian exports. 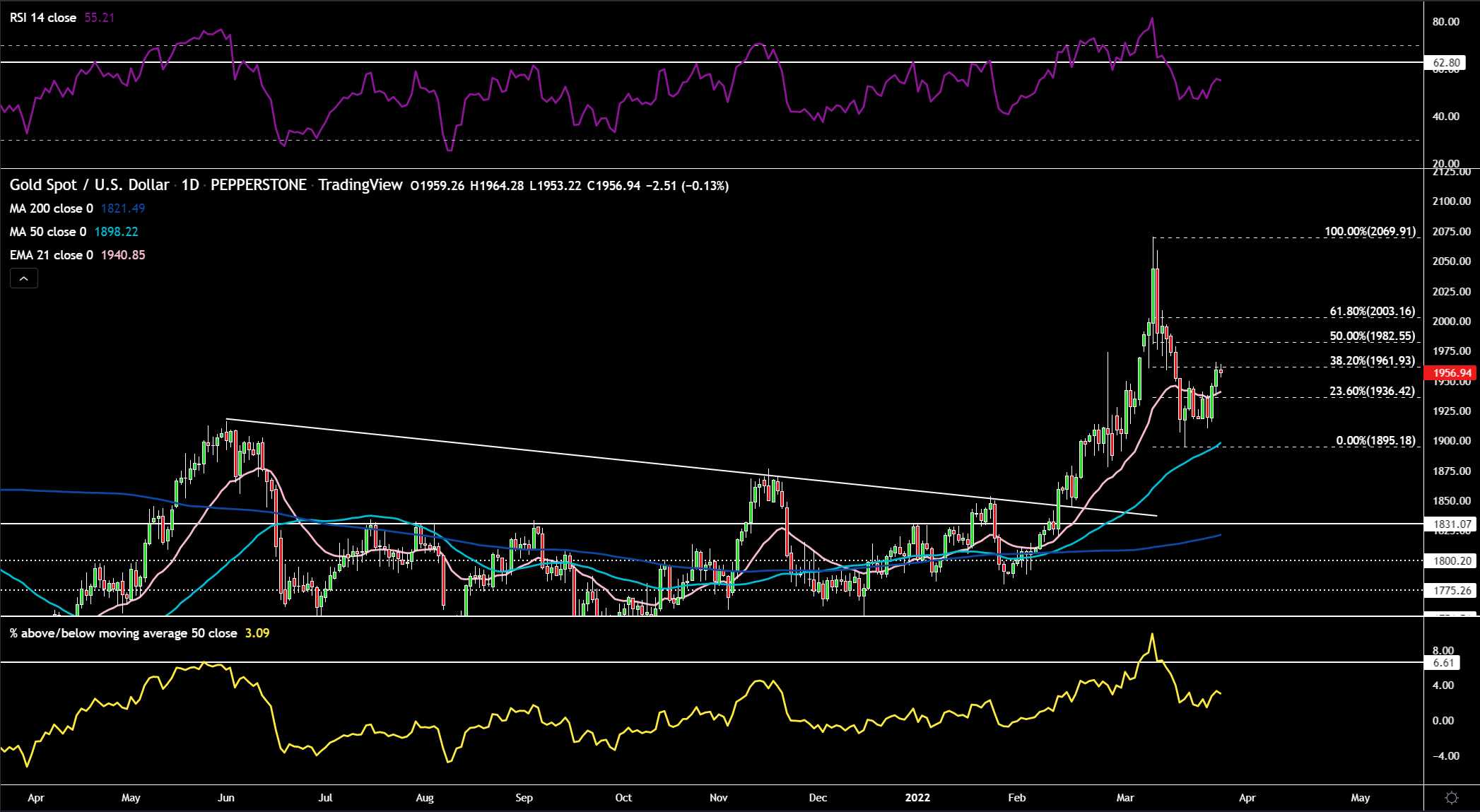 Gold surpassed the $1950 level and got to the mid $1960s. There is resistance at this level in the form of the 38.2% Fibonacci level which would have helped with the modest profit taking seen on the charts. On the downside, the 23.6% Fibonacci level could provide some support and the 21-day EMA. Further below there is the $1900 round number and the 50-day SMA. On the upside, we could see another push towards $2000.

Oil surged Wednesday and took out the key $120 threshold as fears of sanctions built further, more attacks by Houthi rebels and fears over oil exports via the Caspian Pipeline Consortium (CPC) falling by 1 m/bpd due to storm damage. Thursday saw some profit taking as energy sanction fears receded post the Nato summit in Brussels. Also, reports revealed that the CPC could be repaired quickly bringing the supply back online. Prominent oil reporter Amena Bakr tweeted that things are not looking good on the Iran/US nuclear deal. We also saw a significant drawdown in US inventory levels this week. Lastly, the China covid situation is being monitored to further assess the amount of demand being removed due to restrictions. 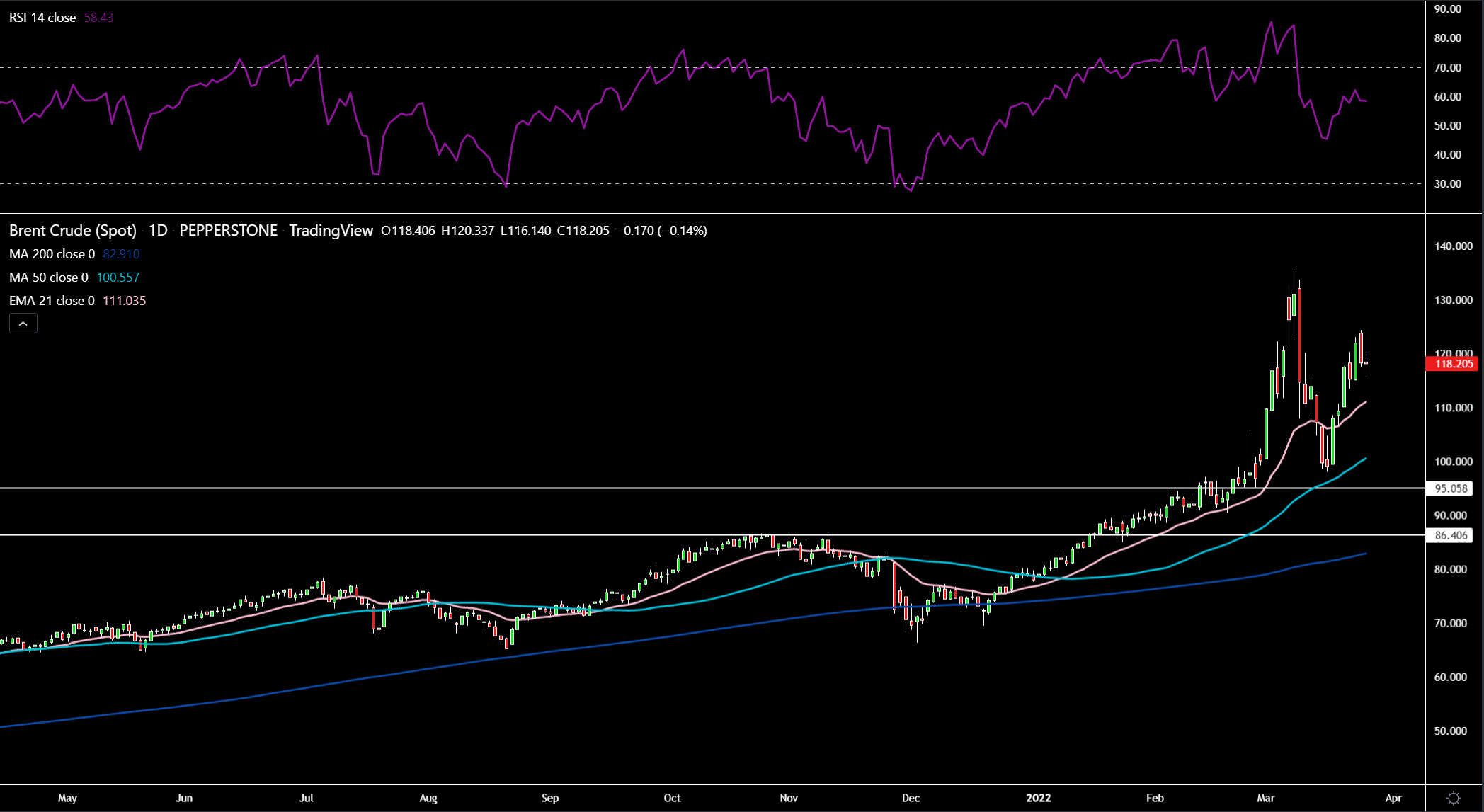