Luke Suddards
Research Strategist
Share
Another interesting week in markets as the week comes to an end. We could see more volatility as $2.1 trillion option notional expires. Read below to find out more.

Weak Chinese data during the early hours of Monday morning led to a surprise rate cut by Chinese policy makers. China is a major player in the global economy so this is not good for risk currencies. Safe havens like the dollar are benefitting from these renewed growth fears. Turnaround Tuesday came for equities as mem stocks and key retailer Walmart shot higher. This led to reduced flows to defensive currencies such as the dollar. US headline retail sales were flat MoM, but core excl autos and gas was strong as well as the control group (important feed through to GDP). This saw US yields higher on the day and the dollar in the driving position.

The widely awaited FOMC minutes failed to provide the hawkish pushback some were expecting. The minutes were littered with dovish comments throughout. The committee believes asset valuations have eased from elevated levels and that financial conditions have experienced a significant tightening (laughable given the equity rally of late). The comments the market really latched onto were regarding the lagged effect of monetary policy and how the FOMC could actually overtighten policy as a result. There was also general agreement that at some point the pace of rate hikes could be slowed. This overshadowed the fears over inflation and taking policy to restrictive territory as well as leaving it there for some time. There was zero mention of 100bps as a hike option and given the dovish undertones mentioned above the market now prices in a 65.5% probability of 50bps hike at the September meeting. The upcoming Jackson Hole meeting next week, Non-Farm Payrolls and US inflation will be key for the September meeting.

Initial jobless claims came in 15k lower than expected at 250k (also previous month revised down by 10k to 252k) and the Philly Fed manufacturing index reported a strong positive number for the first time in 3-months (both employment and new orders up). This contrasts with the terrible NY Fed Empire manufacturing index out at the beginning of the week. This lifted yields and saw a boost for the greenback. The latest Bank of America Fund Manager Survey, shows that long dollar is seen as the most crowded trade currently. Existing home sales presented another weak number declining a full percentage point more than expected MoM (-5.9%).

A WSJ interview with Fed hawk Bullard provided some interesting insights. He wants to see the Fed funds rate at 3.75-4% by year end and is leaning towards a 75bps hike in September. Bullard also pushed back against the dovish Fed pivot, by stating it’s too early to speculate about rate cuts. Optimistically, he believes that the Fed can get inflation back down to the 2% target in 18-months. We’ve had confirmation that Fed Chair, Jerome Powell, will be speaking next Friday at Jackson Hole. 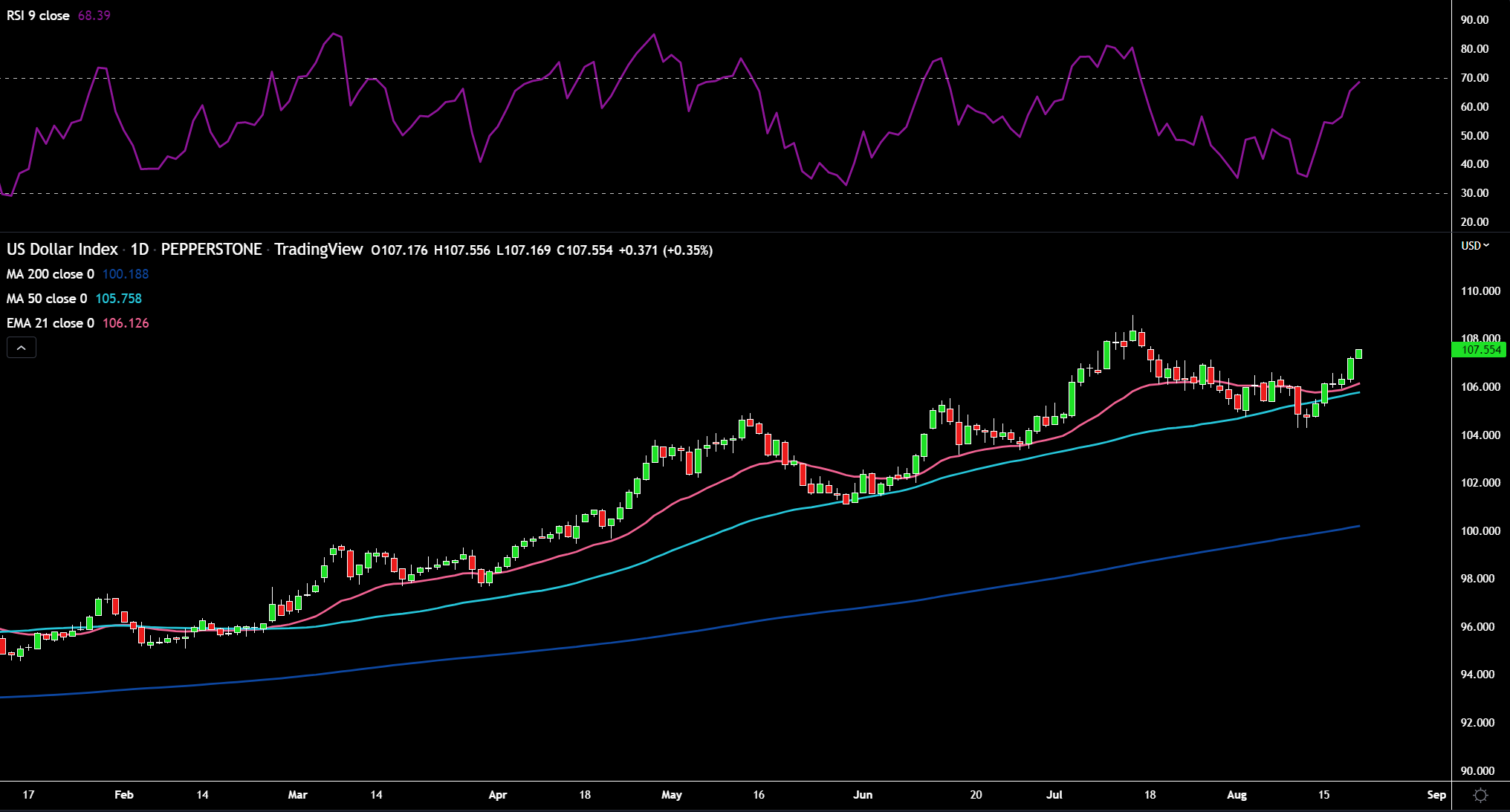 The probability of a recession for the eurozone has risen from 45% to 60% given the multiple headwinds now facing the continent. Surging gas prices, a severely under pressure consumer and now supply bottlenecks as a result of the drought (Rhine water levels are horrendously low). The ZEW economic sentiment index was mixed with future expectations falling lower than expected, while current conditions were a touch better than expected. The index is showing levels consistent with the economy contracting. High gas prices, which will be exacerbated by the levy and low water levels preventing the transportation of coal are weighing on businesses and consumers. It seems a recession is a matter of when not if, with Q4 a likely start date. Speaking of growth, the 2nd estimate of Q2 eurozone GDP came in below expectations at 0.6%.

We heard from ECB Governing Council member Schnabel, who believes inflation is broadening out, however, failed to give any clues on the potential size of the rate hike at the next meeting. Final estimates of inflation for July were smack bang in line with the market’s forecast of 8.9% YoY. Germany announced on Thursday that it plans to lower the sales tax on gas to 7% to help consumers, however, the levies will offset this to some degree. Something needs to be done urgently as French and German 1-year ahead electricity prices look like a meme stock as it goes vertical. German PPI massively surprised to the upside (5.3% MoM vs 0.6% est) and indicates that Europe’s inflation woes continue. 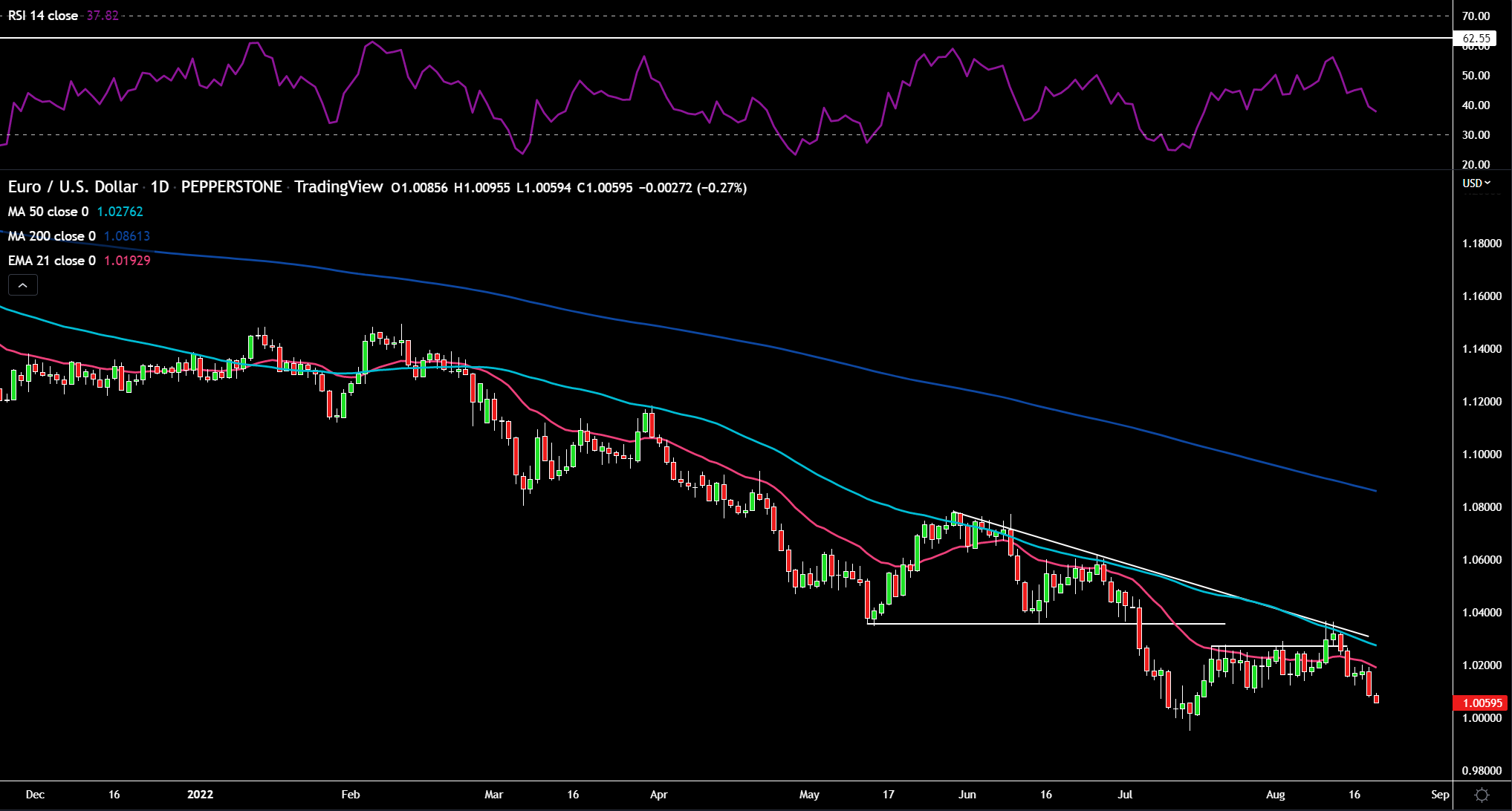 EURUSD has broken through 1.015 support and looks to be eyeing a retest of parity potentially. The RSI remains below 50, indicating a downtrend bias. The 21-day EMA is working nicely as a dynamic resistance. Targets on the upside are 1.015 and 1.027.

Over the weekend news hit the wires that the BoE’s Governor Bailey was open to the BoE’s mandate being reviewed. Would this be a pound positive due to potentially tighter policy perhaps via an asymmetric inflation target or a negative due to independence effectively being “removed”? Continuing briefly on the political front, the UK is set to launch dispute proceedings against the European Union over alleged breaches of the post-Brexit trade deal for the first time. Labour market data out early Tuesday morning still exudes tightness, but at least seems to be past peak tightness. 73 000 employees were added to the payroll for July vs 25k expected. However, the 3-months figure missed by over 100k, printing at 160k. This brings total employment to 649k above its pre-pandemic level. Vacancies declined by 20k on the previous quarter with 1.274 mln jobs still needing to be filled. This was the first quarterly fall since August 2020. The unemployment rate held steady at 3.8%. Despite the better than expected increase in average hourly earnings (both incl and excl bonuses), wages after inflation has been deducted showed a 3% decrease. The most significant fall since records began in 2001. The squeeze is well and truly on for the UK consumer.

UK inflation data for July moved into double digits at 10.1% (new 40-year record), above what the market expected at 9.8% and the previous month’s figure of 9.4%. Food and non-alcoholic drinks were the largest contributors to price pressures. Core (which strips out food and energy) was strong too, rising by 6.2%. Going forward we should see a temporary dip as the slump in oil should provide a reprieve. However, this is likely to be only a temporary help, as we know the Ofgem price cap rise comes into effect in October. The BoE sees a peak of 13.3%, while Citi on Wednesday morning is now predicting an above 15% rate in Q1 2023. Nasty stuff! UK 2-year Gilt yields rocketed higher by over 25bps and the market now prices in back to back 50bps hikes for the September and November meeting, while a coin toss for 50bps in December (39bps) is the prediction. This didn’t give the pound a boost and actually saw a slide lower in Cable. The market now also expects the bank rate to peak above the Fed funds rate at 3.75% with another 200bps priced by May 2023. Don’t think the UK economy can handle that much tightening.

UK consumer confidence hit a new record low at -44, while retail sales impressed with 0.3% MoM vs -0.2% MoM expected. Online sales saw a pick up as a result of promotions, while clothing and household goods sales declined again due to cost of living concerns. 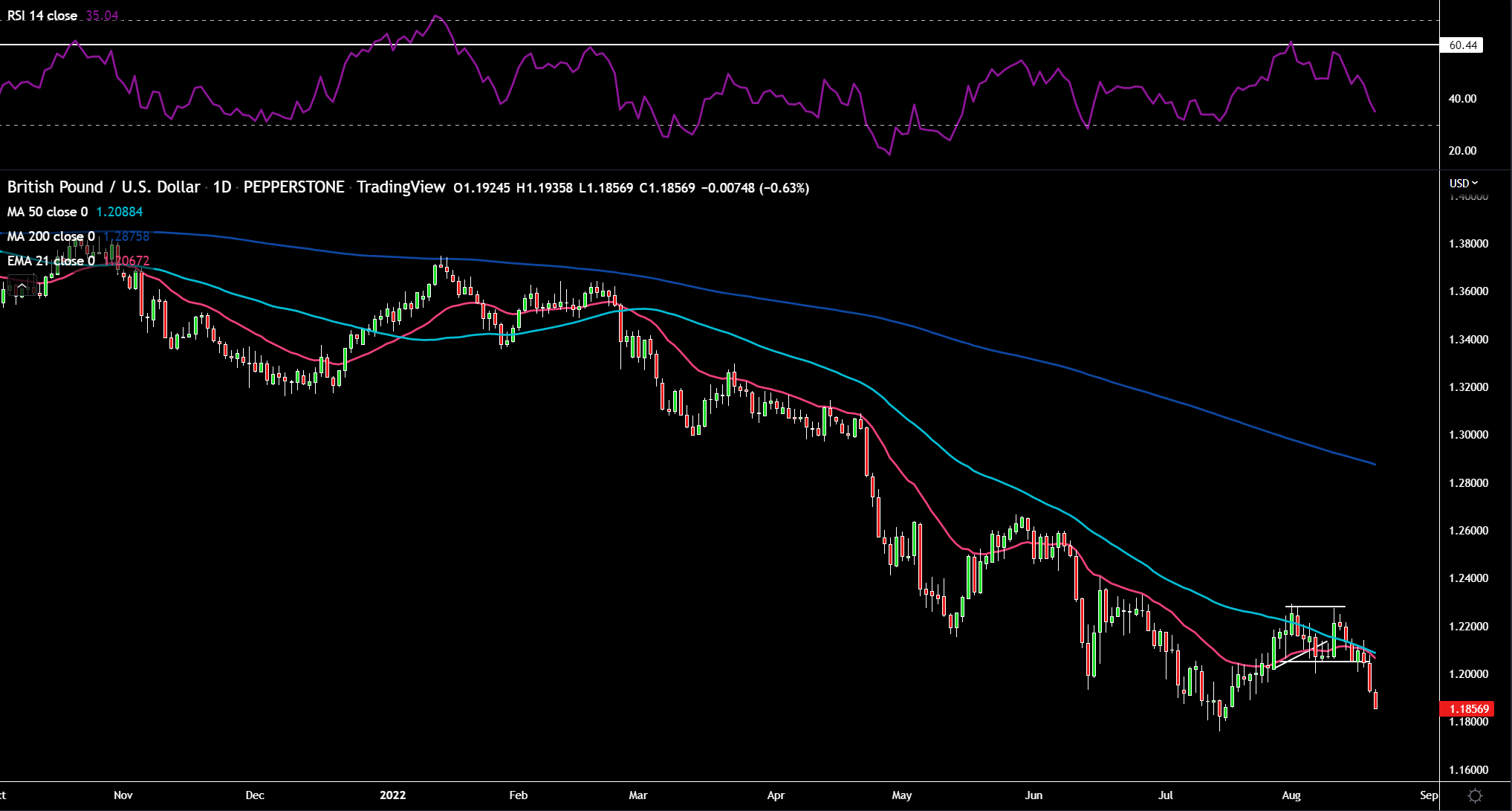 Cable has lost the 1.205 support and is sliding rapidly towards the 1.176 low. The RSI is heading towards oversold but still has room to move lower. On the upside, bulls will need to bring price back to the 1.205 former support. The 50-day SMA sits just above there.

Japan’s Q2 GDP data came in softer than expected with the annualized number printing at 2.2% vs a forecast of 2.5%. Despite this, fears over a global growth slowdown helped keep JPY bid. The FOMC mins sent US 10-year yields lower and USDJPY exploited this to pare back some of its gains. Japanese inflation rose by 2.6% YoY in July vs 2.4% previously. Core rates rose a touch higher than expected at 1.2%. The yen is selling off due to higher yields and those inflation figures aren’t going to move the needle for the BOJ to remove loose policy. Price has pierced the 50-day SMA to the upside. 137 resistance is in sight. The RSI is above 50, indicating a long bias. There is some support at 134.7, which also coincides with the 21-day EMA. 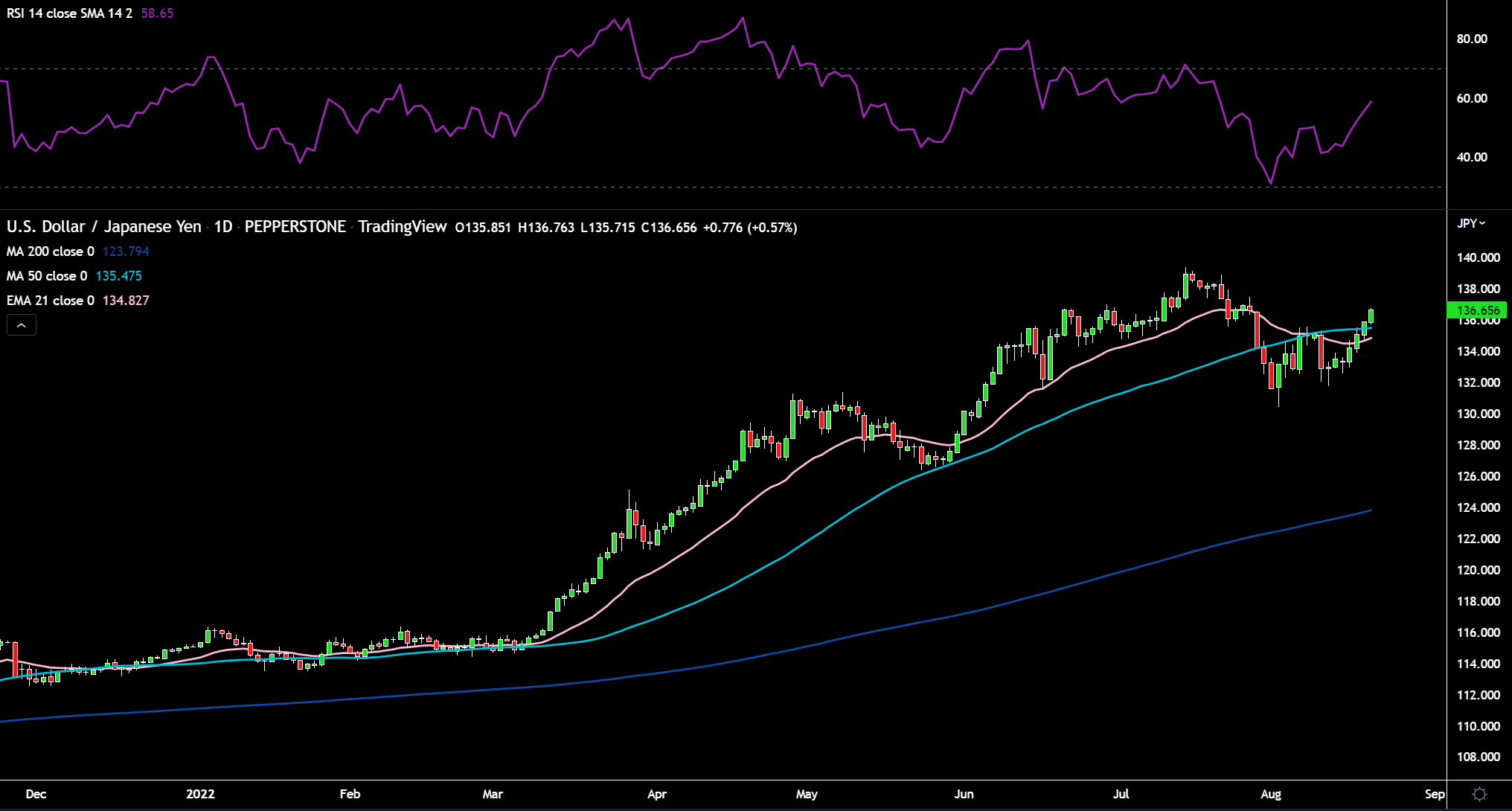 The yellow metal has been shunned as a stronger dollar and higher real yields attract sellers to the asset. The FOMC minutes left gold fairly flat in the first hour after they dropped. The positive US jobs data and Philly Fed manufacturing survey has led to yields moving higher which we know is kryptonite for the yellow metal. The Fed’s Bullard’s comments won’t have helped gold as a stronger dollar and higher yields continue from yesterday pressuring the precious metal into the $1750 support. If the $1750 support breaks then $1725 is the next level to watch for. The RSI has slipped below 50, which means a downtrend bias is in play. Price is also now below the 50-day SMA. On the upside, bulls will need to clear the $1775 level. 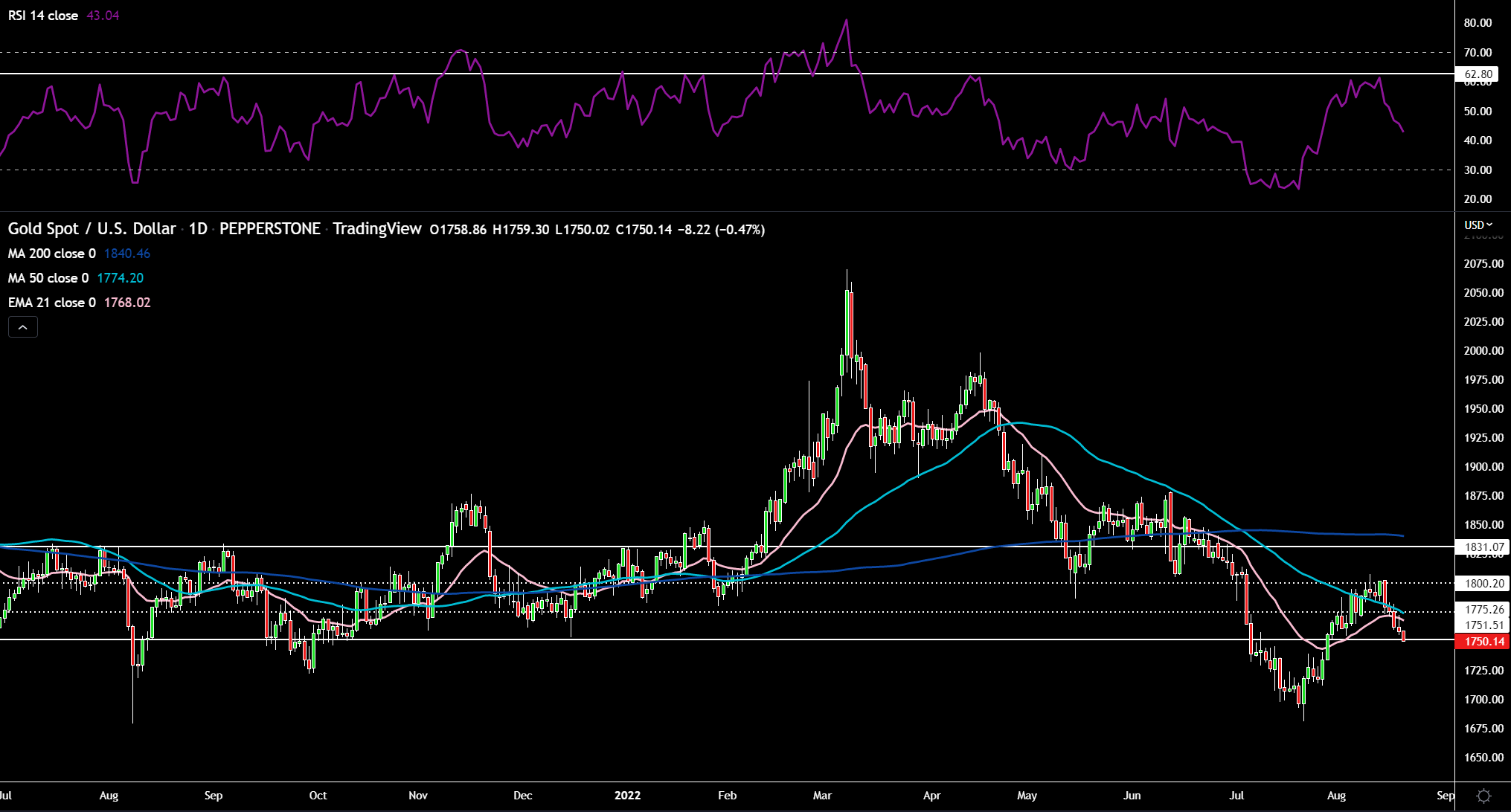 Crude was hit very hard on Monday. The catalyst was mainly driven by China’s growth slowdown – this is important given they’re the largest oil importer. Downside accelerated further when positive news around the Iranian Nuclear negotiations emerged. Lastly, fears of a hard landing and demand destruction were raised again after the calamitous Empire state manufacturing index saw its 2nd largest drop on record. Crude continues to slide despite a larger drawdown in US inventory data than expected, however, recession fears and the Iranian deal continue to weigh bearishly on the black liquid. Official US crude inventory drawdown of -7mln vs 800k gain est. The OPEC+ Secretary General stated that oil markets are at risk of a supply squeeze as demand remains firm and spare production capacity dwindles. This is helping crude have an oversold bounce. Thursday saw crude rebound strongly as news of China continuing to open its economy emboldened the bulls. Additionally, no further news on the Iranian Nuclear deal led to that bearish factor being temporarily removed. However, the sellers have moved in swiftly and are dragging crude lower on no real specific news flow. Potentially just softer risk sentiment. 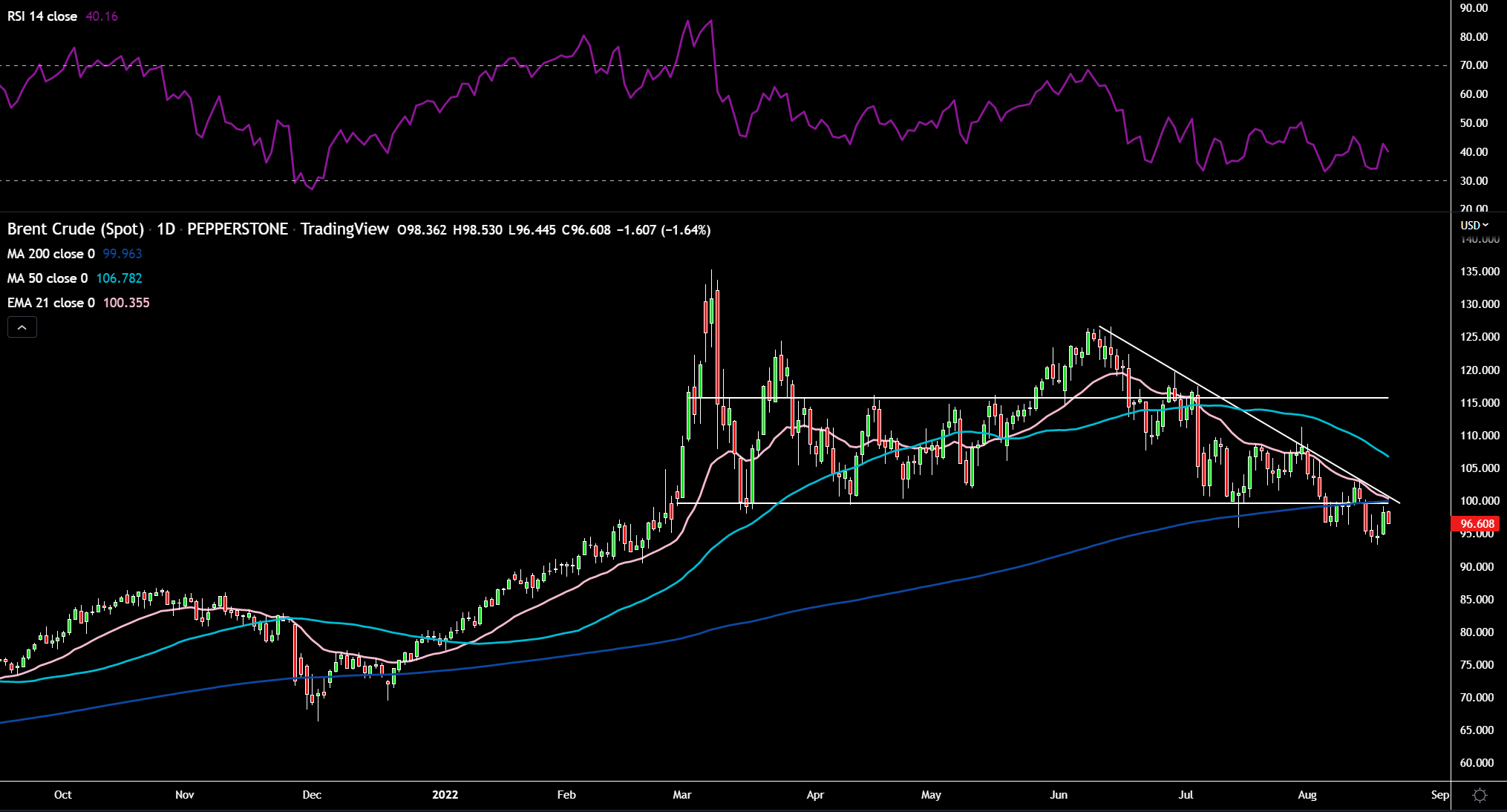 Crude rallied close to its 200-day SMA and the range support at $100. Traders have come back and hit the sell button though. The RSI is around 40, so again a short bias will be in play. $95 is the next major support. 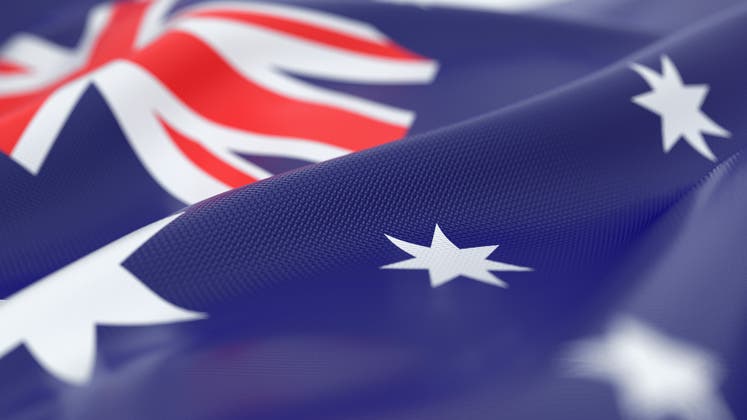 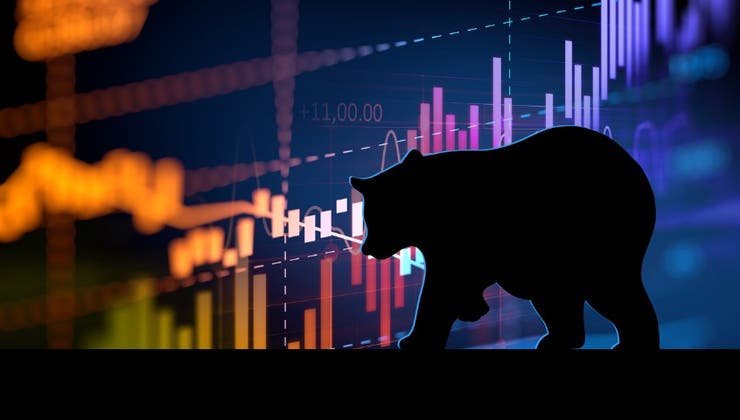