Luke Suddards
Research Strategist
Share
A busy week for the macro traders with plenty to sink your teeth into. Take a read below to find out more.

The dollar began Monday in the green as yields surged, since then it has been under pressure as the market continues to price out the risk premium due to a more rapid schedule of peace talks. Despite any concrete evidence of a breakthrough the market sees a blue sky scenario unfolding. Risk assets ramped higher Wednesday afternoon as reports emerged that Ukraine and Russia had made significant progress on a 15-point peace plan which included a ceasefire and Russian withdrawal if Kyiv declared neutrality and accepts limits on its military. Then 5 mins later news dropped that Ukraine had rejected the proposed neutrality. These are very difficult markets to trade. There was also news of Saudi Arabia accepting yuan for the oil it sells to China instead of USD. An interesting one to watch as a general theme. US retail sales out Wednesday were a touch weaker than expected.

Moving onto the marquee event of the week the FOMC meeting. The Fed moved rates up 25bps as expected with Bullard the lone dissent. Staying on the theme of rate hikes the dot plot came in above market expectations with 7 hikes pencilled in for this year (a hike at every meeting) then another 4 for 2023. From here the rate will plateau at this level and then decline to 2.4% (neutral rate). What is important to note is that the Fed expect to take the policy rate into restrictive territory above the neutral rate in an attempt to shove inflation back to target. The dots are now aligned with market pricing for 2022, but higher than the market’s expectations in 2023 and 2024. Could that be a bullish catalyst for the dollar over the medium-term? Finishing off the discussion on rates with Powell stating that every meeting is a live meeting, policy will have to be nimble and that if it is appropriate to move more quickly they will do so. STIRs are now pricing an 80% chance of a 50bps hike for May, indicating the market took notice of these comments.

The statement of economic projections also received substantial modifications as a result of the conflict. Higher inflation and lower growth is the order of the day. Core PCE inflation was revised up from 2.7% for 2022 to 4.1%. From there it drops to 2.3% in 2024, revised up from 2.1%. GDP received a haircut to 2.8% from 4% for 2022 and then ends the forecast period at 2%. Powell also confirmed that the FOMC made solid progress on the plan for winding down the balance sheet, with an announcement coming as early as May. The meeting minutes out in 3 weeks will provide further details around this. This will involve monthly caps on the run-off of the balance sheet with the proceeds from maturing bonds not reinvested. The Fed’s balance sheet has swelled to just shy of $9 trillion, so bringing this down will form part of the Fed’s normalization plan.

What was the market’s reaction to this? The S&P 500 rallied, the dollar sold-off and gold was bid. The 5s10s curve is inverted now and the 2s10s is rapidly approaching a similar scenario (below 20bps). This looks quite convincingly like a policy error is being priced in, whereby the Fed have to make a policy U-turn down the line. The flattening of the yield curve usually occurs mid to late cycle, the fact that it is occurring before the cycle has even properly got underway is fairly concerning. There is another potential explanation for the risk on behaviour exhibited by the market – Powell’s belief that the probability of recession was "not particularly elevated", the "economy is very strong" and can handle a tightening of policy. 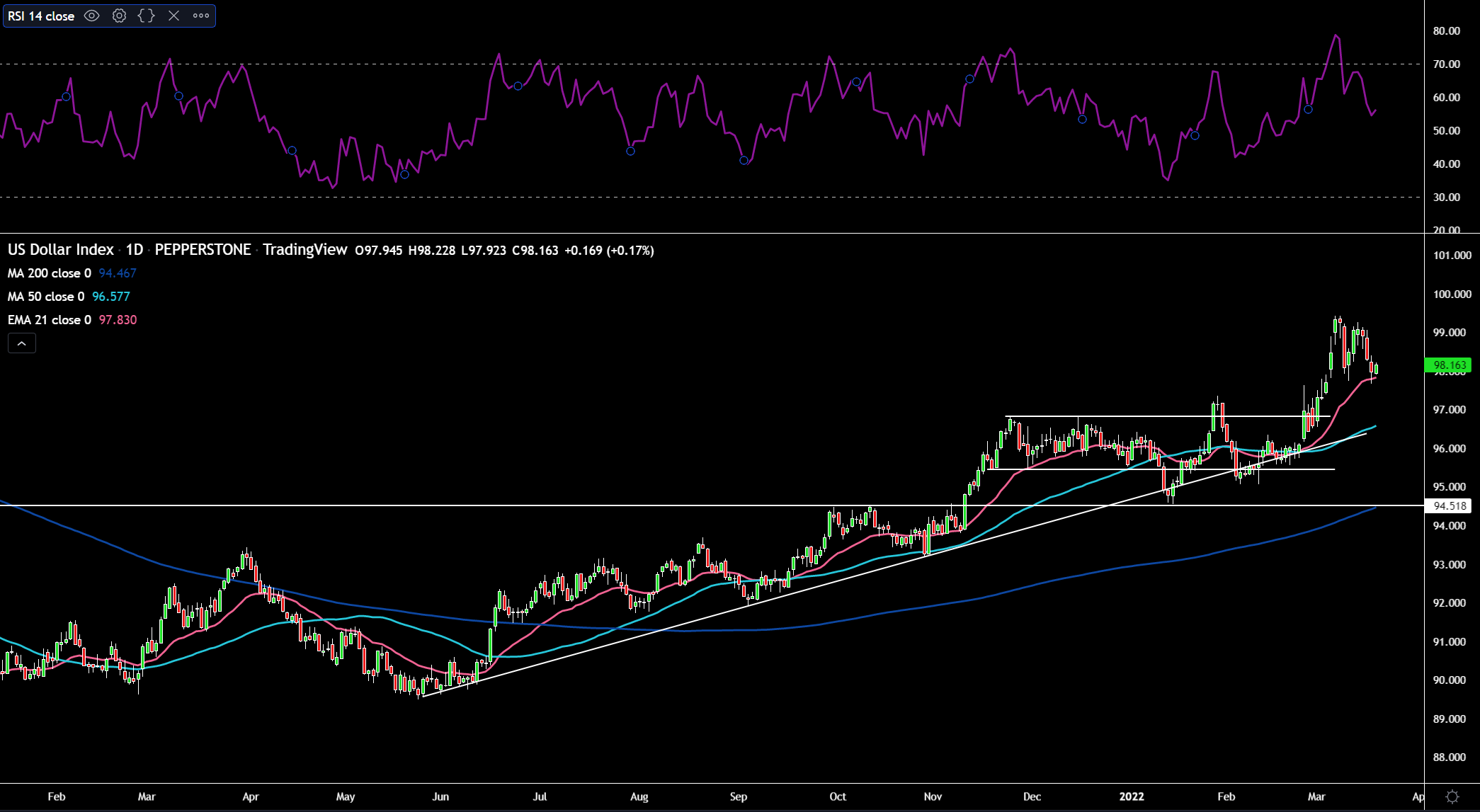 The dollar is trying to turn its fortunes around the 21-day EMA and the round number of 98. Is this a retracement or the beginning of a new bear trend after peak hawkishness from the Fed. A break below here would bring the former range resistance back into play around 97. On the upside, a move back towards 99 and 99.5 would be the areas to watch.

The single currency continues to benefit from the market’s optimism around the Ukraine situation. Euro crosses bore the brunt of the risk premium repricing given its beta to the invasion geographically and economically (given its liquidity, the euro was a good vehicle to use to short Europe). This could easily turn if things were to escalate further, but for now the market feels satisfied with the early movements on peace talks. The German ZEW Economic Sentiment index took a serious knock given the effects on consumer confidence and higher energy prices from the invasion. The expectations gauge printed at -39.3, decimating the already low bar of 5 expected. This was also down on the previous month’s figure of 54.3. The President of ZEW believes a recession is more and more likely. The final estimate of inflation for the eurozone came in above expectations at 5.9% vs 5.8%. We also had key members of the governing council on the wires yesterday, however, there was nothing of substance to affect the euro. 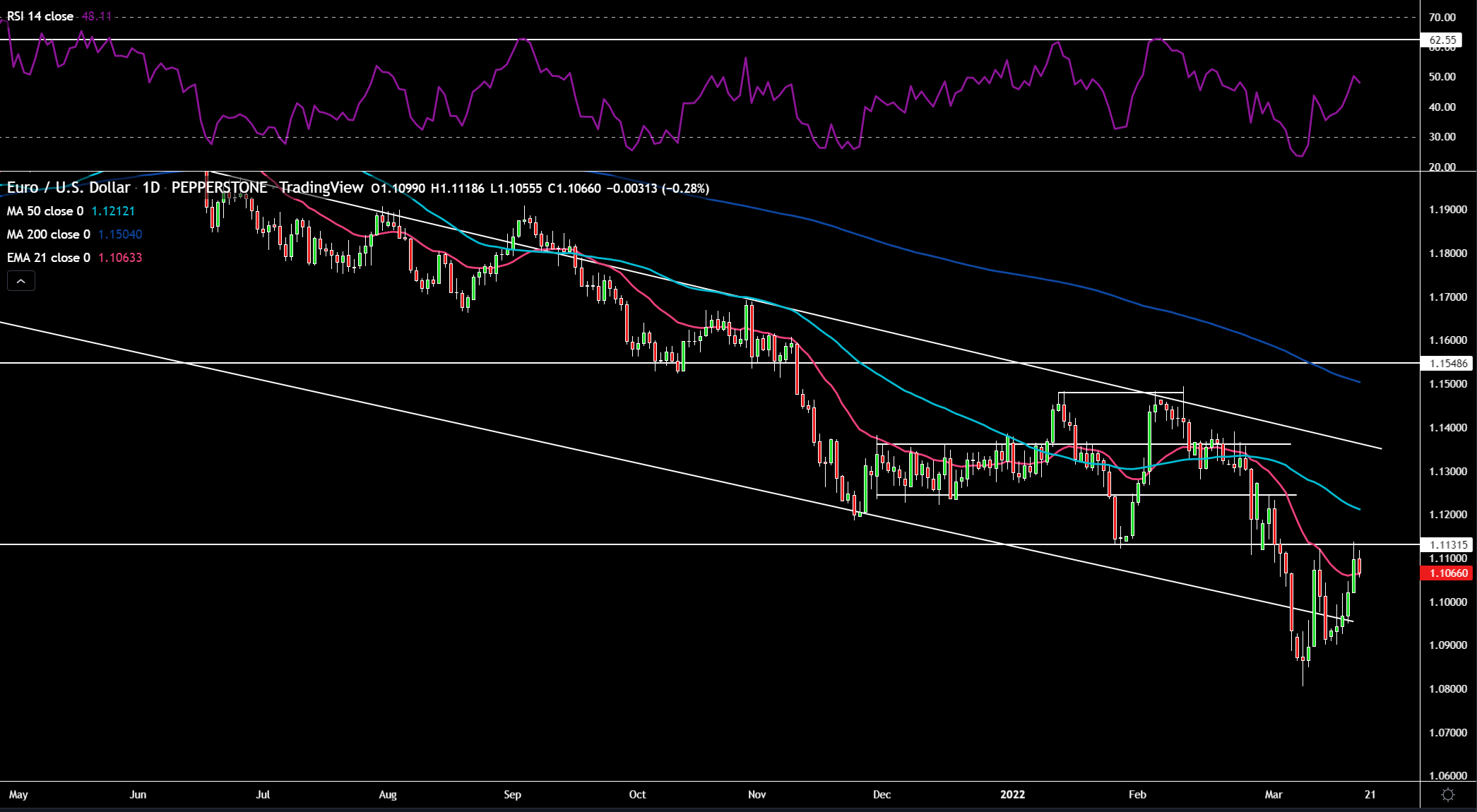 EURUSD has had a good week, rallying from around 1.09 all the way up to a high of 1.11 and above. Price tagged the horizontal resistance and has found some sellers. The 21-day EMA is right below price. The RSI is rolling over around the 50 mark. Levels to keep an eye on would be 1.10 on the downside and 1.113 on the upside.

The pound recovered some of its losses, but not quite as much as the euro given the bounce in risk sentiment. This is likely down to traders wanting to get the BoE meeting out the way first, hence containing animal spirits from pushing GBPUSD higher. The labour market remains tight with fresh data out on Tuesday showing the unemployment rate falling to 3.9% Average earnings excl. bonus beat expectations and printed at 3.8%. The BoE hiked by 25bps meeting (back to pre-pandemic levels) the markets expectations, but then tweaked their forward guidance on rate policy from modest tightening “likely to be appropriate” to “might be appropriate”. Additionally, the MPC members voted 8-1 on the rate hike whereas the last meeting showed 4 dissents for a 50bps hike. Further to this the BoE implied that market pricing of the bank rate had got a bit too punchy with inflation based off those rates being below target at the end of the forecast horizon. This led to a fall in the number of hikes priced by year end from 7 pre-meeting to 5 post. They also see inflation around 8% in Q2 and it may climb higher as the year progresses. 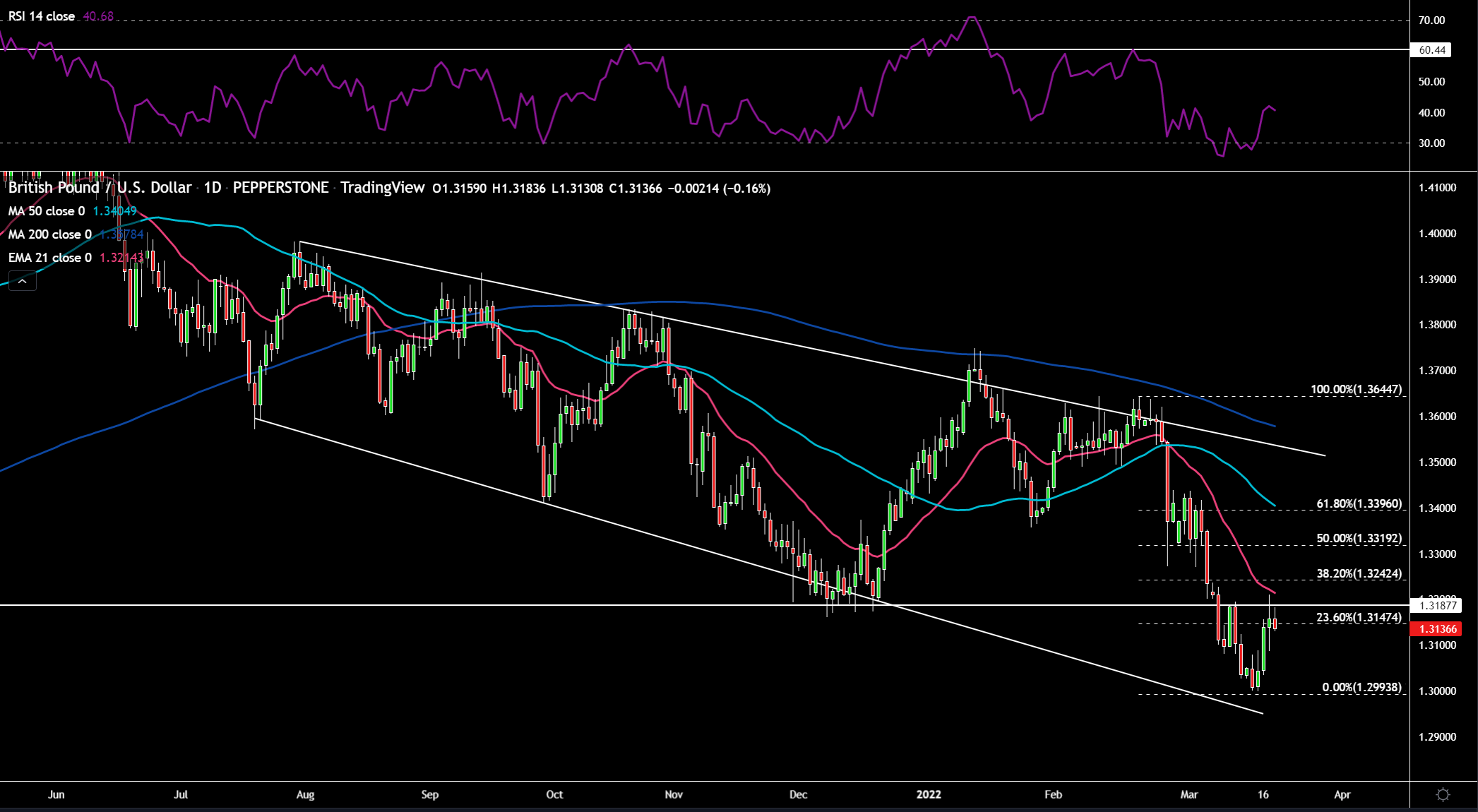 GBPUSD didn’t like the BoE meeting’s result as explained above and the technical resistance was too much to overcome. There was the 21-day EMA, horizontal resistance at 1.32 and the 38.2% Fibonacci level just above. The RSI is in no man’s land so not particularly useful at this juncture. On the upside, 1.32 is key and on the downside 1.30.

USDJPY is rocketing higher as we go back to basics with the clean expression of higher US yields being the dominant driver. Risk sentiment and the oil price is taking a back seat for now. I do wonder though if price breaches 120 on USDJPY if the BOJ may start to become a bit jumpy as imported inflation intensifies. We heard Japan’s Deputy Chief Cabinet Secretary Isozaki recently talk about the importance of FX stability and that the government will continue to monitor the impact on the general economy. Trade deficit data for February was over 6 times worse than expected showing the eroding effect of higher oil prices on Japan’s current account.

The BOJ meeting led to no surprises as Governor Kuroda decided to leave interest rates and asset purchases unchanged. The economic outlook was also downgraded. They don’t mind being the outlier and last to the tightening party. The BOJ are still razor focused on wage growth and looking through the energy cost effect on inflation. The yen should continue to weaken particularly against the dollar as a result of this policy divergence. 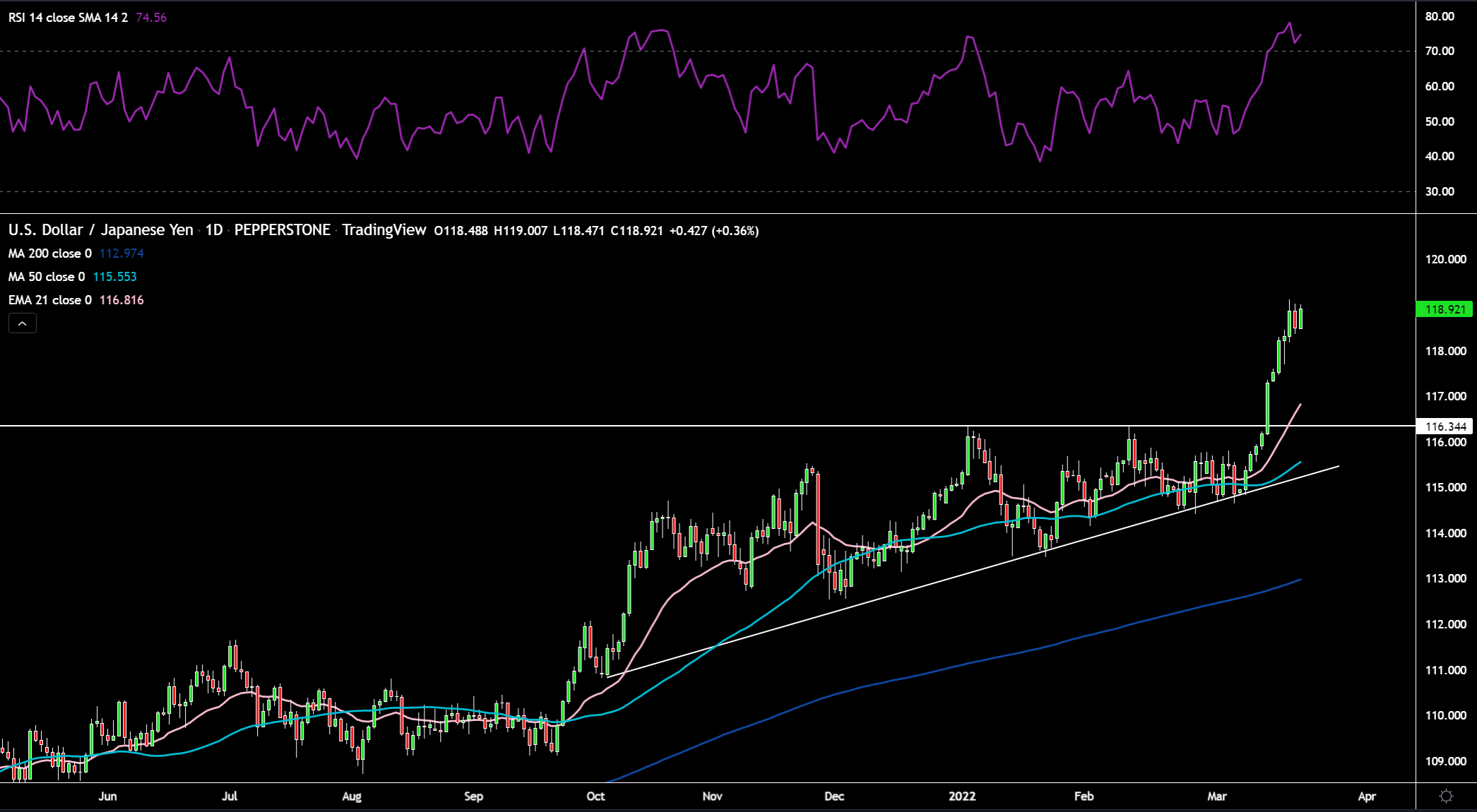 USDJPY continues to hurtle towards 120 with price just shy of 119. The flat sided ascending triangle structure would project up to 120 too. Price is overbought on the RSI so we could see a pause in the rally before another leg higher.

The yellow metal is trading at a hefty premium to fair value based on US 10-year real yields. Correlation between the two instruments looks like it could be returning to its historical relationship of an inverse correlation. At the height of its disconnect it reached a circa 70% +ve correlation. It’s weakness of late has been driven by the unwinding of the risk premium given its label as a peace proxy asset. The Fed meeting was hawkish yet gold is rallying post the event. This could be a policy mistake recession scenario being priced with gold discounting a cutting cycle. The market sees the hiking cycle stalling as early as next year around this time according to forward OIS and Fed Fund Futures. The surge in oil prices yesterday saw inflation breakevens shoot higher dragging real yields down, which provided a nice tailwind for the commodity. 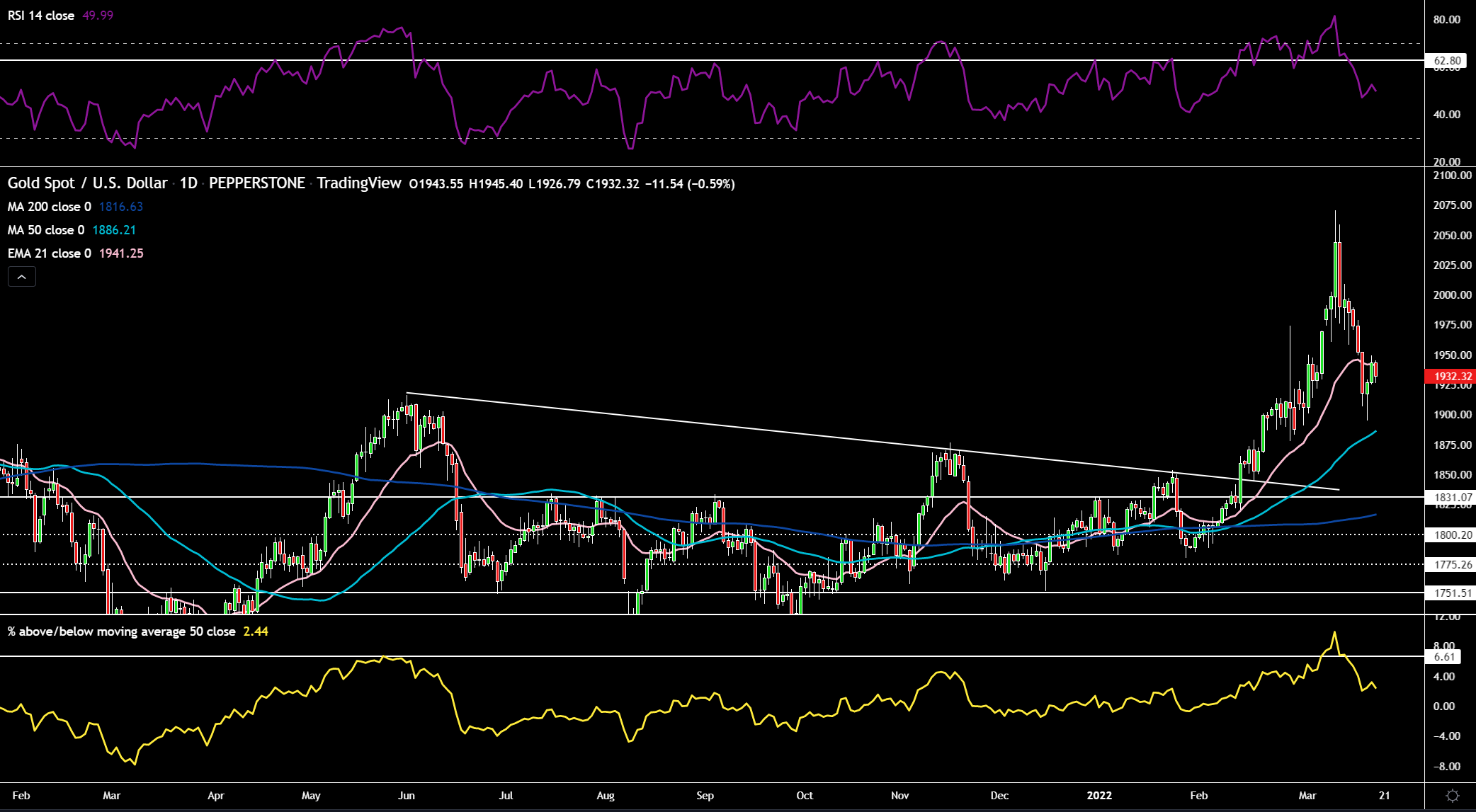 Oil started off the week on the back foot as the geopolitical premium is priced out. This was combined with the lockdown of Shenzhen in China, with fears it could spread to other major cities. Yesterday crude absolutely surged almost 10% on the day. This was down to the IEA stating that 3 millions barrels per day could be shut in from next month. Demand has obviously taken a hit due to the global growth downgrades, however, tighter supply is overshadowing the lower demand. Additionally, some are hopeful China will keep their factories running despite covid becoming problematic, which would lead to more crude demand through the production process. US inventory out Wednesday night showed a substantial build in levels. This will give those concerned of tank bottoms a brief respite. 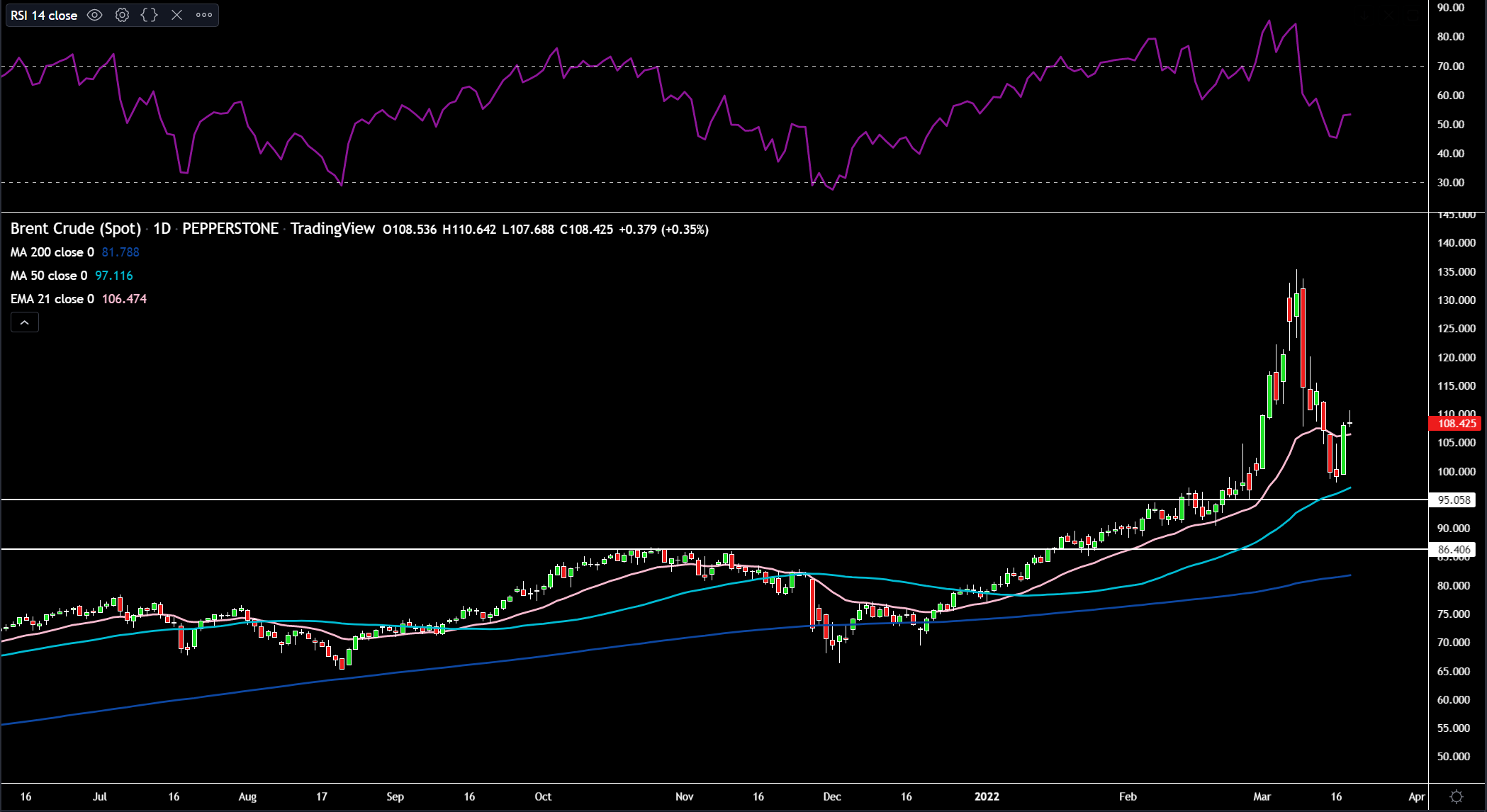 Crude is not doing much today after its massive surge yesterday. Price got back to $110 but is now paring some of these gains back. The RSI isn’t providing much useful info at these levels. Like gold we could see another range between $110 and $100 (50-day SMA slightly below) play out here.