Luke Suddards
Research Strategist
Share
Bit of risk aversion as well as the ECB meeting were the two major themes for market's this week. Let's take a look below for more.

The dollar rebounded early in the week and tagged its 50-day SMA. I think this was the left side of the dollar smile kicking into action (risk-aversion demand) – this has been evidenced by the softness in global equities. Stagflation concerns are creeping into some investors’ minds as growth metrics peak, job growth stalls and inflation remains punchy. All of this amidst still strong taper chatter seems to have rattled the market’s cage a bit. Could there be fears of a policy mistake by the Fed, tightening too early? Jolts data out on Wednesday was quite something. There was another record number of job availability (10.934mln) – highlighting that demand for jobs is solid, but supply just isn’t matching it. For example, there are now circa 2mln more job openings than the total unemployed persons in the US. This is clearly inflationary and should put upward pressure on wages. However, benefit payments will be coming to an end this week and should see a scramble back into the labour force. Initial jobless claims beat expectations of 335k and the previous number of 345k to print at 310k. Continuing claims couldn’t match this beat and disappointed. The strong 10-year bond auction on Wednesday evening, followed by the stellar 30-year auction on Thursday saw yields move lower and this put some pressure on the greenback as the week comes to a close. Fed speakers Kaplan and Bullard were there hawkish selves calling for an early taper. 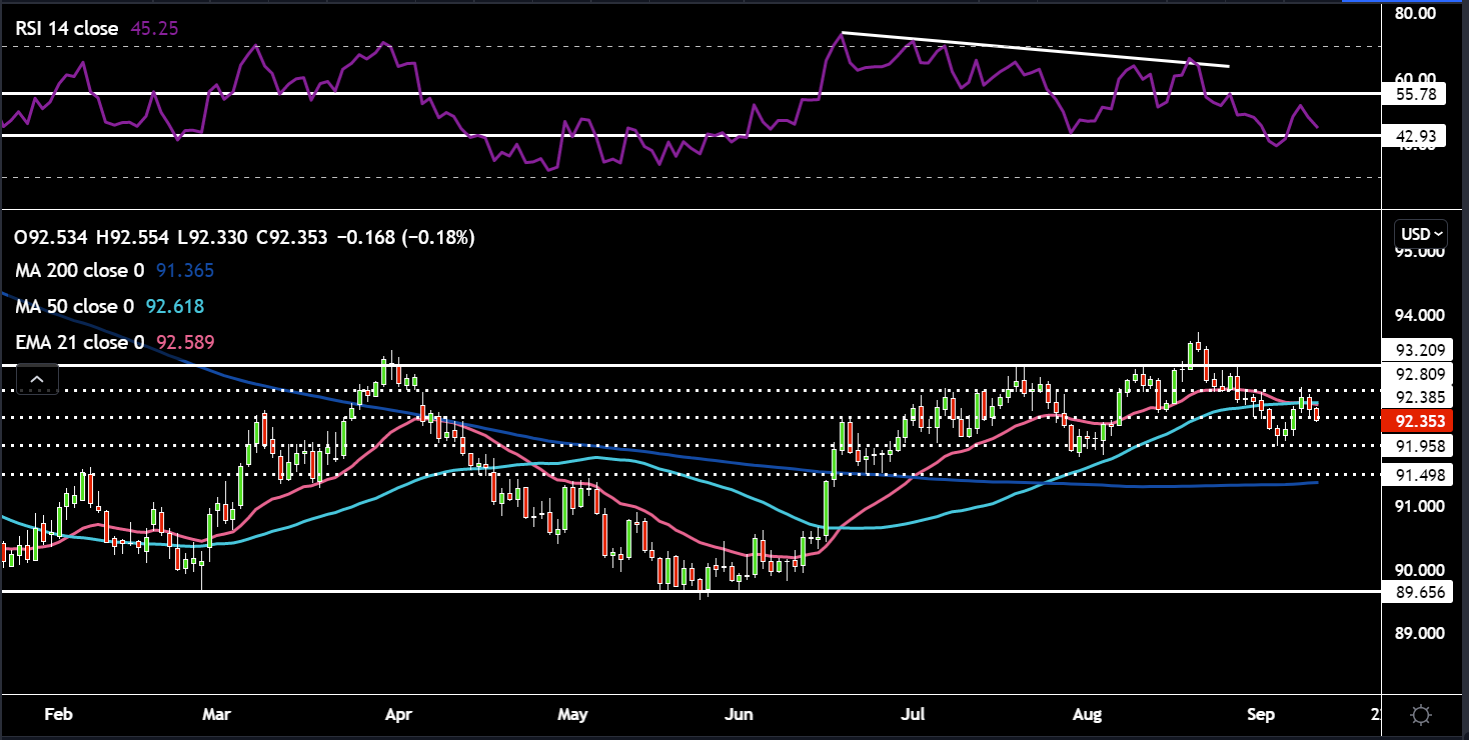 Price is now a touch below its 50-day SMA and is also just below the 92.385 horizontal support. The RSI has fallen below the 55 level, but just above the 42.93 mark where price managed to hold last time it sold-off. I do wonder if the dollar index is in a massive range between 93.209 and 89.656 as indicated by the white solid lines drawn on the chart. The upside price target would be 92.8 resistance and 93.2 above there. On the downside, 92 and 91.5 support would pique my interest.

Tuesday data out from the eurozone started on a strong footing with the final estimate for Q2 GDP being revised higher and beating expectations, however, ZEW index data from Germany was poor and missed consensus forecasts. The ECB decided to go with a taper (I refuse to call it a recalibration as Lagarde does) using language such as “moderately lower pace of net asset purchases under the PEPP than in the previous two quarters” as a result of the benign financing conditions and inflation outlook. The pace of PEPP monthly purchases to be targeted will be between €60bln and €70bln with flexibility, according to sources. We will hear more about the transition from PEPP to APP in December as Lagarde stated in her press conference. GDP was revised up in the near term but unchanged in the final forecast year (2023). Inflation followed the same pathway – steep then declines -indicating the transitory inflation narrative is still firmly supported by the Governing Council. The 2023 inflation figure was revised up from 1.4% to 1.5% (still far from the 2% target over medium-term). Evidently, the ECB faces an uphill battle to lift inflation to its new 2% target on a durable basis, especially if history is anything to go by. Credibility of achieving their new target wanes by the day.

The euro is holding onto last week's gains. Price has now found some support around the 50-day SMA and 21-day EMA as well as the upper trend line of the descending channel. The 1.19 area is a major resistance level and it looks like we could have a double top on EURUSD. The RSI rolled over and touched the 52 level and bounced off it. Levels to watch on the upside and downside would be as follows. 1.19 on the upside and 1.175 on the downside. I'd be surprised if we saw price move out of these bounds in the near-term.

The UK has had a barren data week, but this has been replaced by interesting political developments and policy announcements. National Insurance will be increased by 1.25%, dividend tax will go up by the same amount too – this all on top of the planned corporate tax hike. Tightening fiscal policy is a no no in my books and I think it’s quite poor from the government. We also got news that a spending review would coincide with the Budget, scheduled for October 27 2021. We got some Bank of England chatter on the wires too as MPC member Saunders informed us that GDP is now probably fairly close to pre-pandemic levels and that inflation rose faster than expected. He’s known to be a hawk so it’s not surprising he’s speaking like this. Something more interesting popped onto my radar this week as Governor Bailey of the BoE revealed that more are moving over to the hawkish/neutral camp as there was a 4-4 split between members of the MPC on whether conditions were ready for policy tightening to begin. GDP data out this morning came in well below expectations, indicating the effects of supply chain issues, caution as delta cases rose and the "pingdemic" which forced many workers to isolate. August and September should be improved based on recent data. The GDP numbers today leaves the economy 2.1% below pre-pandemic levels according to the Office for National Statistics. 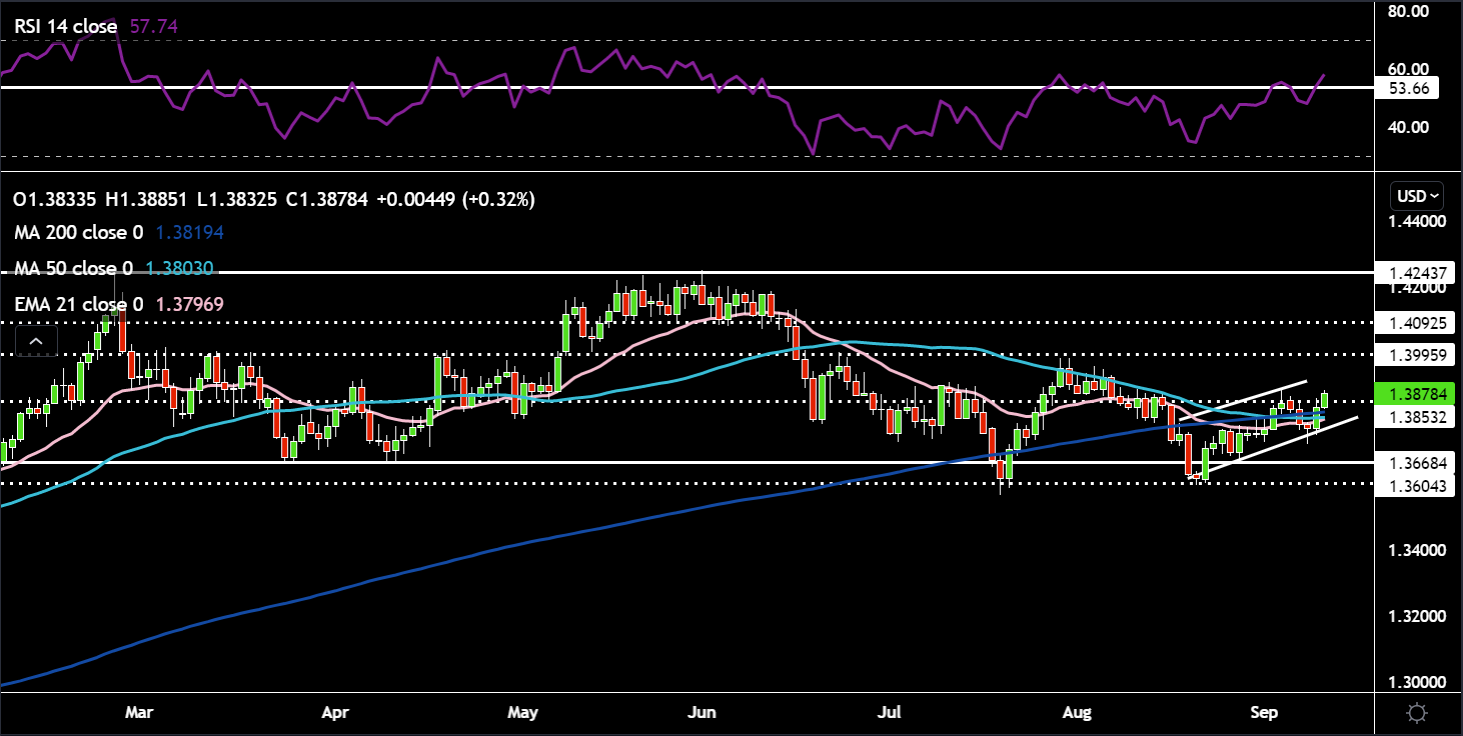 Price is now rebounding off its moving averages and lower trend line of the mini ascending channel. All the moving averages are stacked on top of each other. The death cross which took place last week is still present (very minor though). The RSI has sliced through the 53.66 zone, which contained further price rallies in the past. Targets on the upside would be 1.395 and 1.40, while on downside moves I'd look to 1.38 (moving averages) and then 1.374 minor support.

The Aussie hasn’t had the best week and although we saw the RBA decide to push on with its taper from A$5bln to A$4bln, there was a dovish sting in the tail as the programme was extended from November 2021 to February 2022. So a slower pace of purchases, but over a more protracted period - indicating they’re not keen to take their foot of the stimulus pedal just yet. A$1 bln is pretty insignificant and fiscal policy better suited to support an economy in lockdown. In general, the conditions for the currency are favourable on the whole - high savings rate (pent up demand), vaccination rates ramping up, went into lockdowns on a solid growth footing (better than expected Q2 GDP growth). Net shorts positioning are still very chunky. Iron ore, Australia’s largest export, continues to tumble lower as China’s steel production remains suppressed not helping the Aussie. 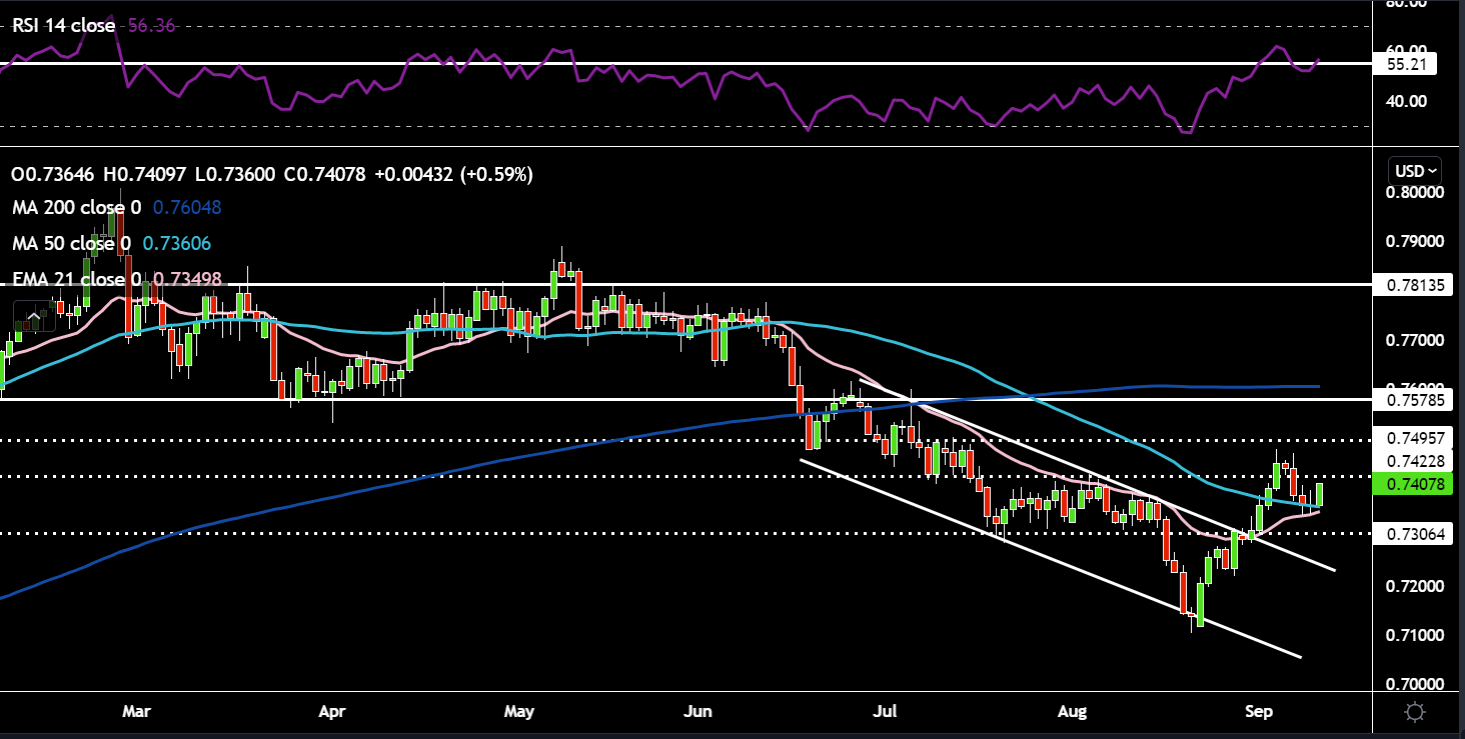 AUDUSD had a go at the 0.75 resistance level and got within a whisker of it, but then risk-sentiment soured and the RBA didn't help prop the currency up. Price found support around its 50-day SMA and 21-day EMA. The RSI rolled over from its 60 resistance area, but now looks like it wants to have another go. Targets on the upside could be around 0.74228 resistance and beyond there the 0.749/0.75 zone. On the downside 0.73 will be key.

Oil has seen some interesting developments this week. On the jet fuel demand front, Ryanair CEO remained upbeat about travel and is forecasting his companies volumes during Christmas to be 90% of pre-pandemic volumes. There were reports that the UK is considering making changes to the amber and green list countries on their traffic light system. Essentially, the change would involve removing burdensome testing for fully vaccinated travellers. The black liquid took a bit of a knock to its confidence as the week got underway when the Saudis cut prices for Asian customers by more than twice the expected amount to retain market share amongst Asia. Also, it now looks like refining (demand) may actually return faster than production (supply) according to industry reports, which is a reversal of last week’s assumptions – emphasizing the necessity to be flexible in this particular market. We also nearly had another stuck ship in the Suez Canal on Thursday, but unluckily for oil bulls the ship was quickly refloated and sent on its way. Oil’s price mimicked a rollercoaster on Thursday first dropping as China announced it would be releasing oil from its reserves to try and alleviate price pressures within their manufacturing sector and then rallying into the US inventory data release, which saw a smaller than expected drawdown in crude inventories, but a massive draw in gasoline stocks. 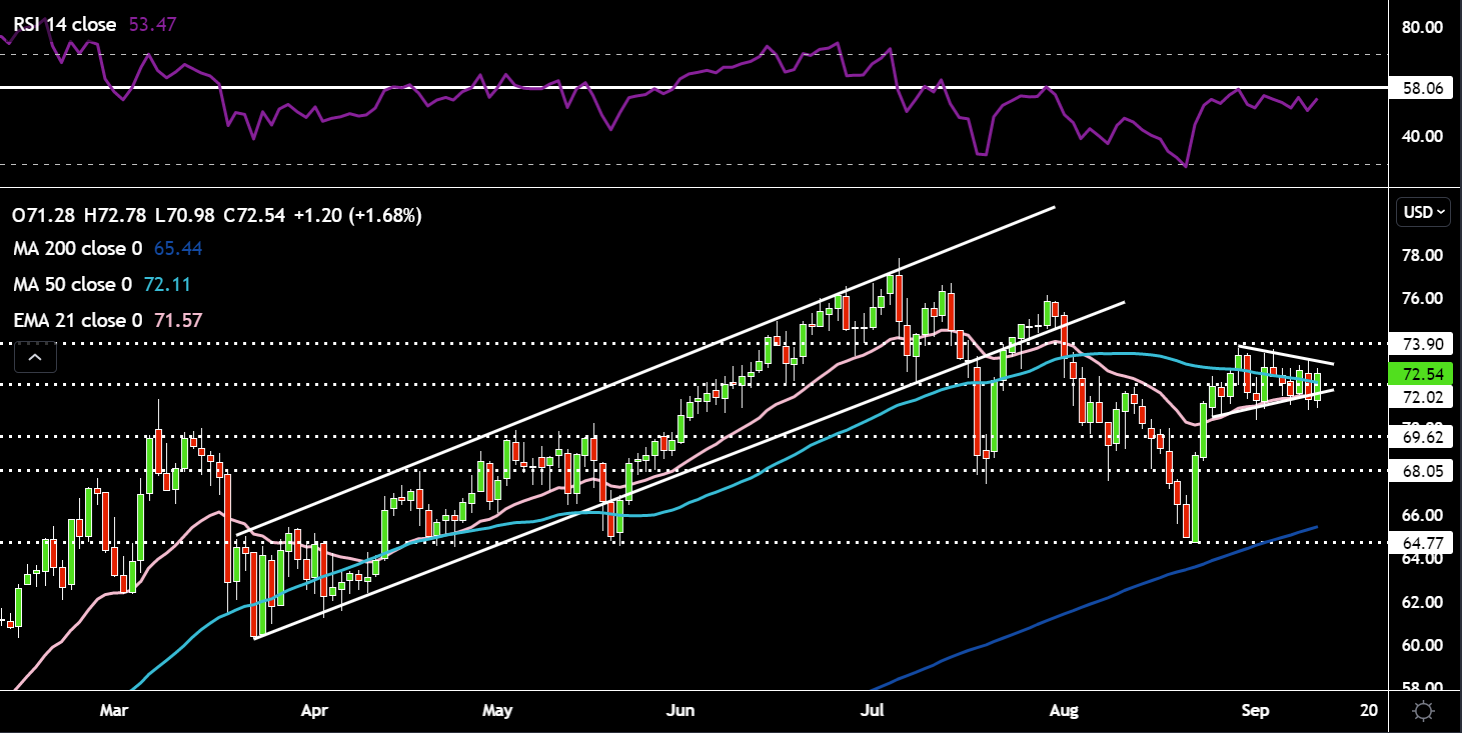 The black liquid is forming a mini triangle pattern as price coils tightly. Price has bounced strongly off the lower trend line of this pattern. The RSI is hovering close to the 58 level. Price remaining above its 50-day SMA is good for the bulls. Targets could be $74 resistance and $75 with previous highs of $77.82 coming into play too. On the downside, $70 could be a key level as well as $68.

Gold tagged the $1830 resistance and then took a 1.6% knock as real yields and the dollar exploded higher on Tuesday. Price has now stabilized around the 50-day SMA and 21-day EMA. The strong 10-year auction of US bonds on Wednesday evening has caused some headwinds to higher yields and this obviously helps gold. Where the dollar and real yields go will determine gold’s direction in the near term. The $1830 level is very strong resistance and could see a triple top playing out here. The RSI is turned up looking at the 55 resistance zone. The 50-day SMA is also getting closer to the 200-day SMA. Golden cross? To the upside $1830 would be a good level to monitor. On the downside, $1775 and $1750 would be areas of interest. 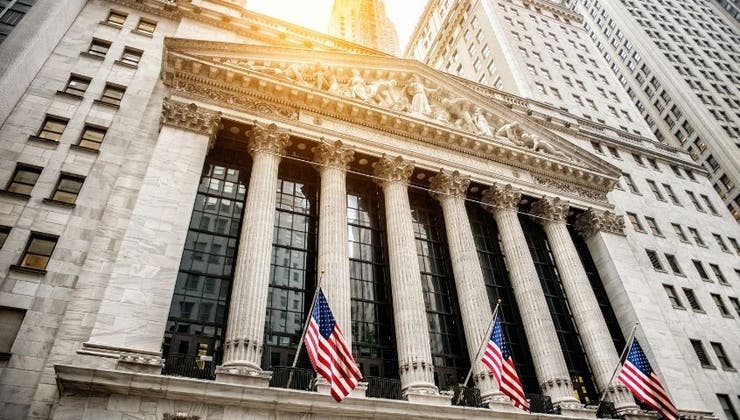