Luke Suddards
Research Strategist
Share
What a week. Plenty of volatility for traders to deal with and it's all as a result of Central Banks. Read below to find out what catalyzed all the big moves.

The greenback has had a torrid weak. A reversal higher in equity markets, VIX substantially lower, AUDJPY (all metrics I look at to get a read on risk sentiment) and the risk on switch being flicked to engage mode saw the dollar suffer prior to the ECB meeting. Then DXY got absolutely drilled on the back of a surprise hawkish pivot by the ECB, which caught many off guard including myself. This was always a risk, but I must say I didn’t anticipate it to be happening this soon. ISM manufacturing PMI data was a touch better than expected with a particularly strong prices paid component. ADP data was shocking, coming in at -301k much lower than the 207k expected. Initial jobless claims were mildly below the forecasted number and continuing claims disappointed a touch. Non-Farm Payrolls just released were really solid with a big beat on the headline number at 467k vs 125k expected. There was also a strong revision on December’s figures from 199k to 510k. Additionally, wage growth and the participation rate outperformed consensus expectations. All round a very good report. The dollar responded in kind with yields across the board jumping higher. US STIRs are now pricing around 33bps of hikes for March (non-negligible chance of 50bps hike) with circa 140bps for December of this year. Next week’s US inflation data out on Thursday will bring some more event risk for markets. 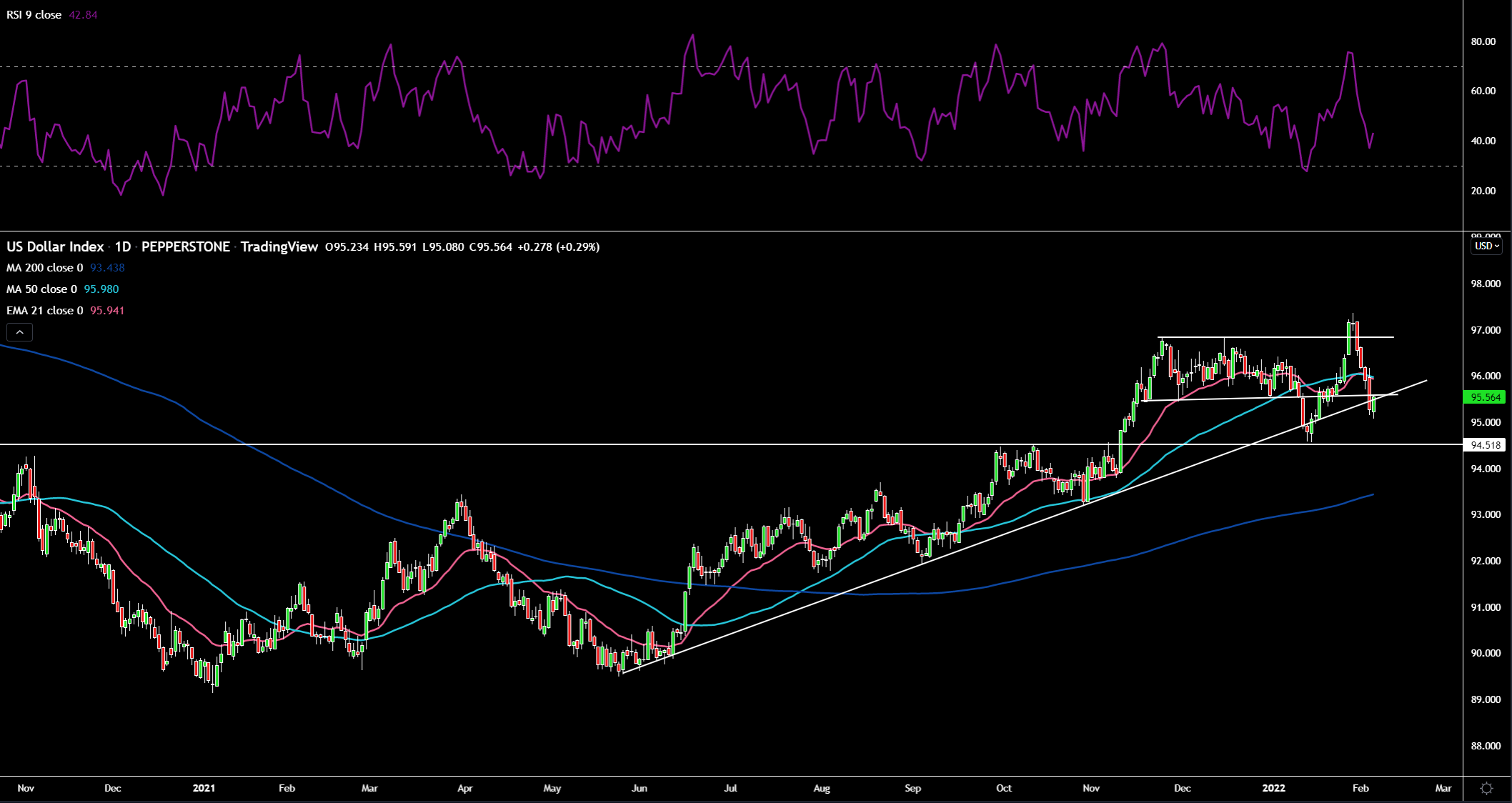 DXY is trying to reclaim its trend line after breaching it yesterday. There is some resistance in the form of the 95.5 round number and from the range support too. The RSI has turned around and is now pointing higher. Targets wise I like 96 on the upside, which also brings the 50-day SMA and 21-day EMA into play. On the downside, 95 would be of interest.

As mentioned above better risk sentiment has helped the single currency this week and the resolution of the Italian presidential vote would have led to a sigh of relief over in Brussels. German inflation data started the week off and printed above expectations. The eurozone Markit manufacturing PMI unfortunately couldn’t continue this positivity and missed to the downside quite a bit. The unemployment rate for the euro area as a whole fell to 7%. Euro zone inflation really shocked though as the headline figure printed not only above expectations but above last month’s figure. Many had expected that German VAT and base effects would pressure this number lower. The euro surged on the back of the hawkish pivot by the ECB. I’ll summarize the moves and the key results from this marquee event.

1) Inflation is clearly causing concern for the ECB with phrases like “unanimous concern on the governing council” and “risks to inflation tilted to the upside”. 2) Lagarde refusing to repeat her line that rate hikes are unlikely in 2022 – this led to a complete repricing in rates with markets now seeing 13.8bps of hikes by June and 50bps by December (incredible!). It definitely seems as if Lagarde was recalibrating markets before March’s meeting which could get very interesting. Then we had sources out with some zingers! “It’s sensible not to exclude a rate hike this year" and that "an end of bond-buying under the APP in the third quarter is possible". Further to this that the ECB see policy change at the March meeting if inflation doesn’t ease and a sizable minority wanted to change policy at yesterday’s meeting. BTP-Bund spreads have widened dramatically and many research houses are now calling for 2 hikes of 25bps at the September and December meeting. How times change! 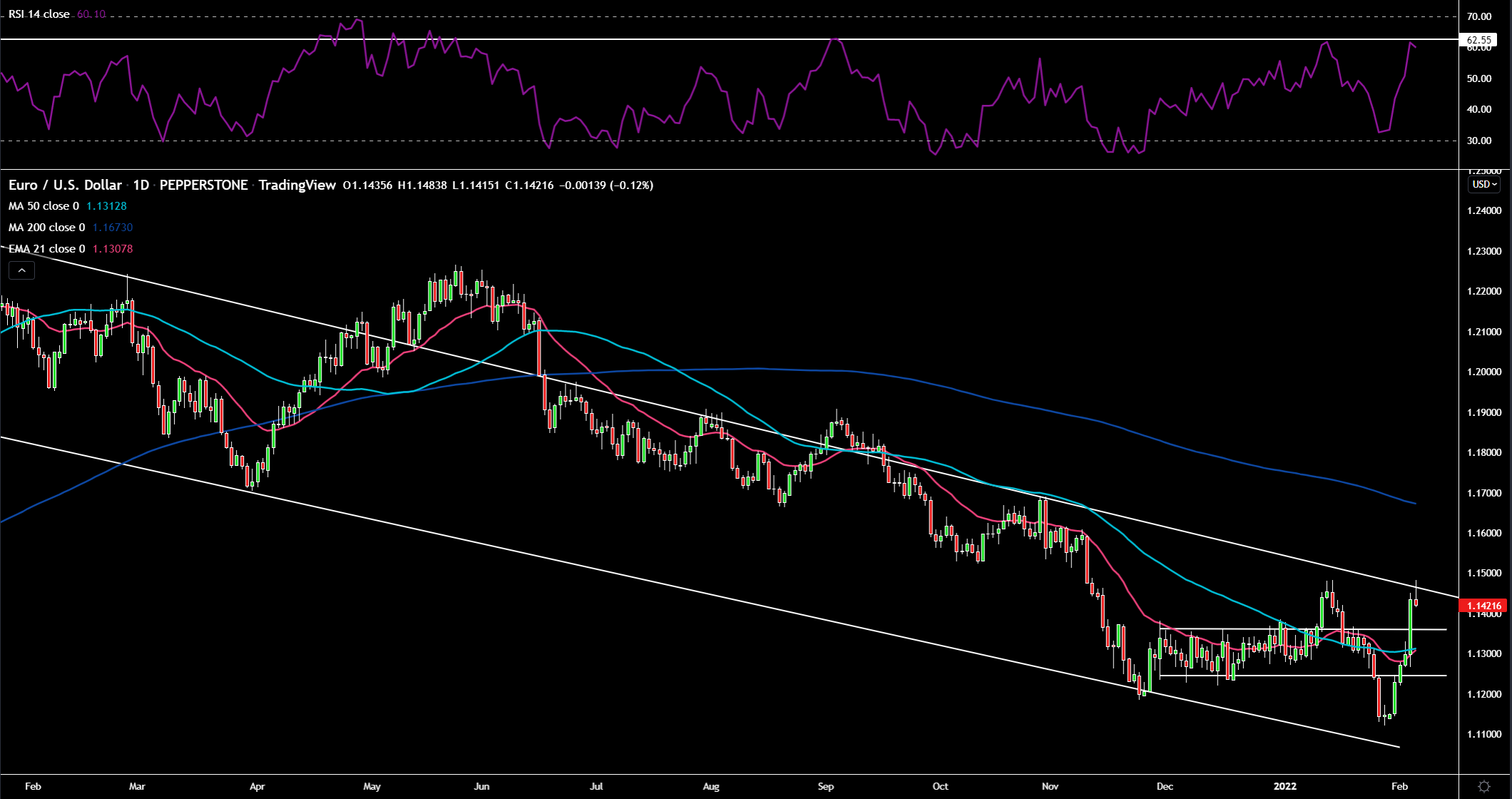 EURUSD rallied right up to the upper trend line of the descending channel and had 1.15 in its sights, but the NFP print blunted this move. The RSI is also hovering around a key level where price has struggled previously – 62.55. Targets I look to on the upside are -1.15 and 1.155. On the downside, 1.135 (former range resistance would be important to monitor)

The high beta pound loved the renewed risk taking vibe given its close correlation with equity markets. Data leading up to Thursday’s BoE meeting was solid with the Markit manufacturing PMI coming in well above expectations. The composite and services figure followed suit with impressive numbers beating forecasts. Central banks have certainly been bitten by the hawkish bug with developments unfolding lately. The Bank of England yesterday was bitten!

They hiked rates by 25bps as expected by the market, but what caught many off guard was the 4 dissents including dovish member Mann who wanted a 50bps hike instead. With a vote distribution like that, we should see another hike at the next meeting. “QT light” is beginning with the immediate halting of the reinvestment of maturing gilts. Corporate bonds will take a more aggressive approach with outright asset sales. We also received updated forecasts which indicated a peak for inflation to 7.25% in April (previously 6%). STIRs (short term interest rates) have been pulled forward to price in 1% bank rate by May. The Committee is deeply concerned about wage price developments and this is the major source of upside pressure. However, as a signal to the market that the almost 6 rate hikes currently priced in are too aggressive, the BoE sees their end of projection period inflation number at 1.6% (well below the 2% target and previous forecast of 1.95%). During the presser, Bailey also remarked “it's a mistake to assume rates are on an inevitable long march up” and to not get “too carried away”. This to me poses a potential source of downside risk for sterling as this repricing lower could take place.

The Sue Gray report was a complete anti-climax with little blame directed squarely at Johnson, she has been restricted by what she could say down to the Met’s investigation. The energy price cap will be lifted by 54% or £693 from April in conjunction with the 1.25% increase in National Insurance. Rishi Sunak unveiled some support yesterday in the form of a council tax rebate of £150 (for April) and a cut to the energy bill by £200 which will occur in October. Don’t really feel it will move the needle that much for consumers. The Brexit issue is becoming interesting again with the DUP leader stating no more checks will take place for goods moving from GB to NI, this led to the Northern Ireland First Minister resigning. Maros Sefcovic and Liz Truss will be meeting next week in London to discuss the tense situation further. 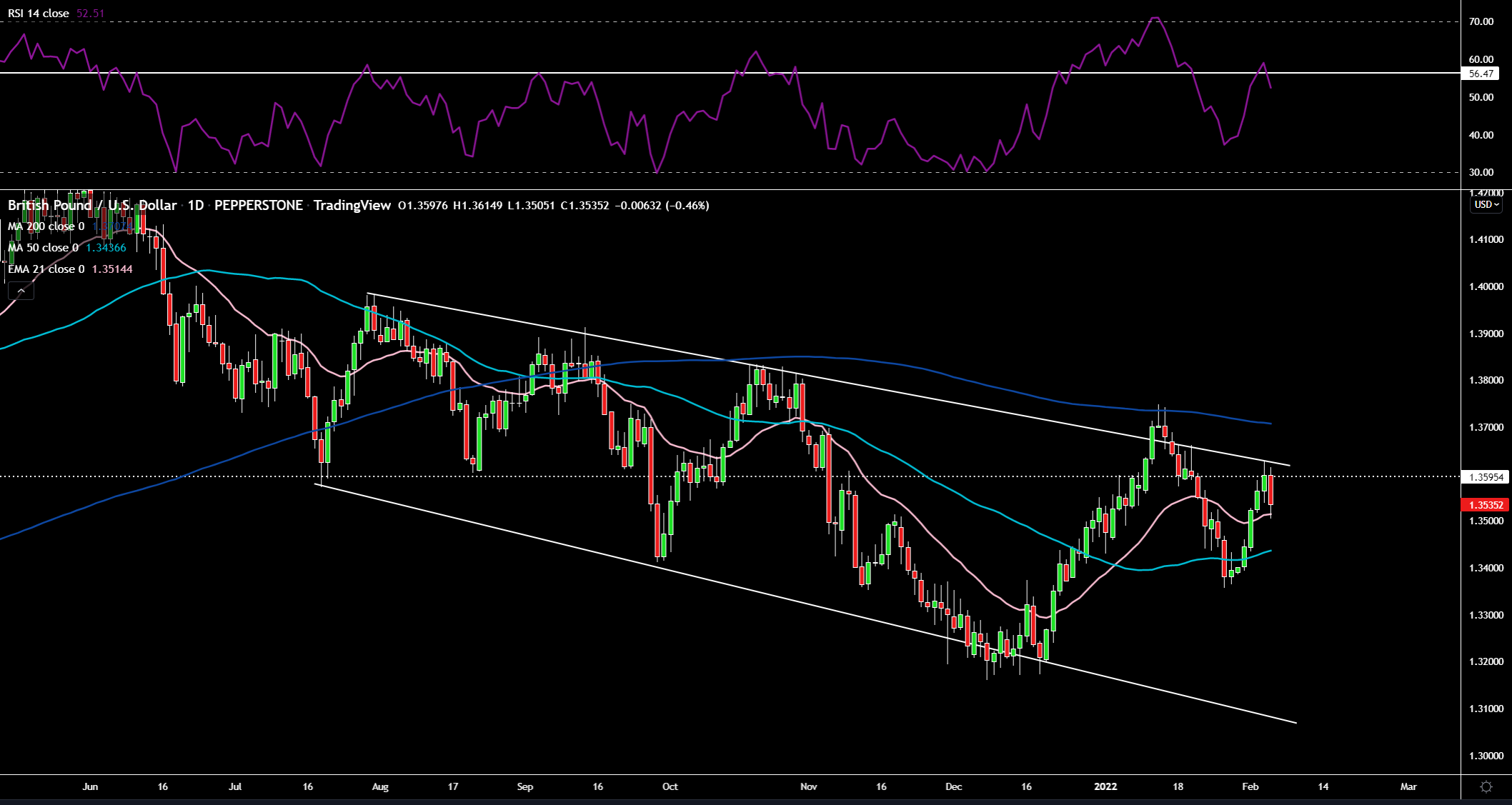 GBPUSD has struggled to push beyond its trend line of the descending channel. We now see a big bearish engulfing candle on the charts, squeezed between the 21-day EMA and the 1.36 resistance zone. The RSI has also turned lower from just above 60, which has been a stumbling block previously too. Targets – to the upside 1.36 and on the downside 1.344 (50-day SMA) would be good to watch.

Dollar yen had been heading lower until yesterday with Japanese yields surging higher the rate differential tailwind underpinning USDJPY was removed. 5Y Japanese bond yields are back above zero for the first time since 2016. 10-year yields are hovering right around the upper bound of the BOJ’s yield curve control. The spill over from the ECB has led to traders now testing the BOJ’s resolve. The surge in US 10-year yields post NFP has pressured USDJPY higher. 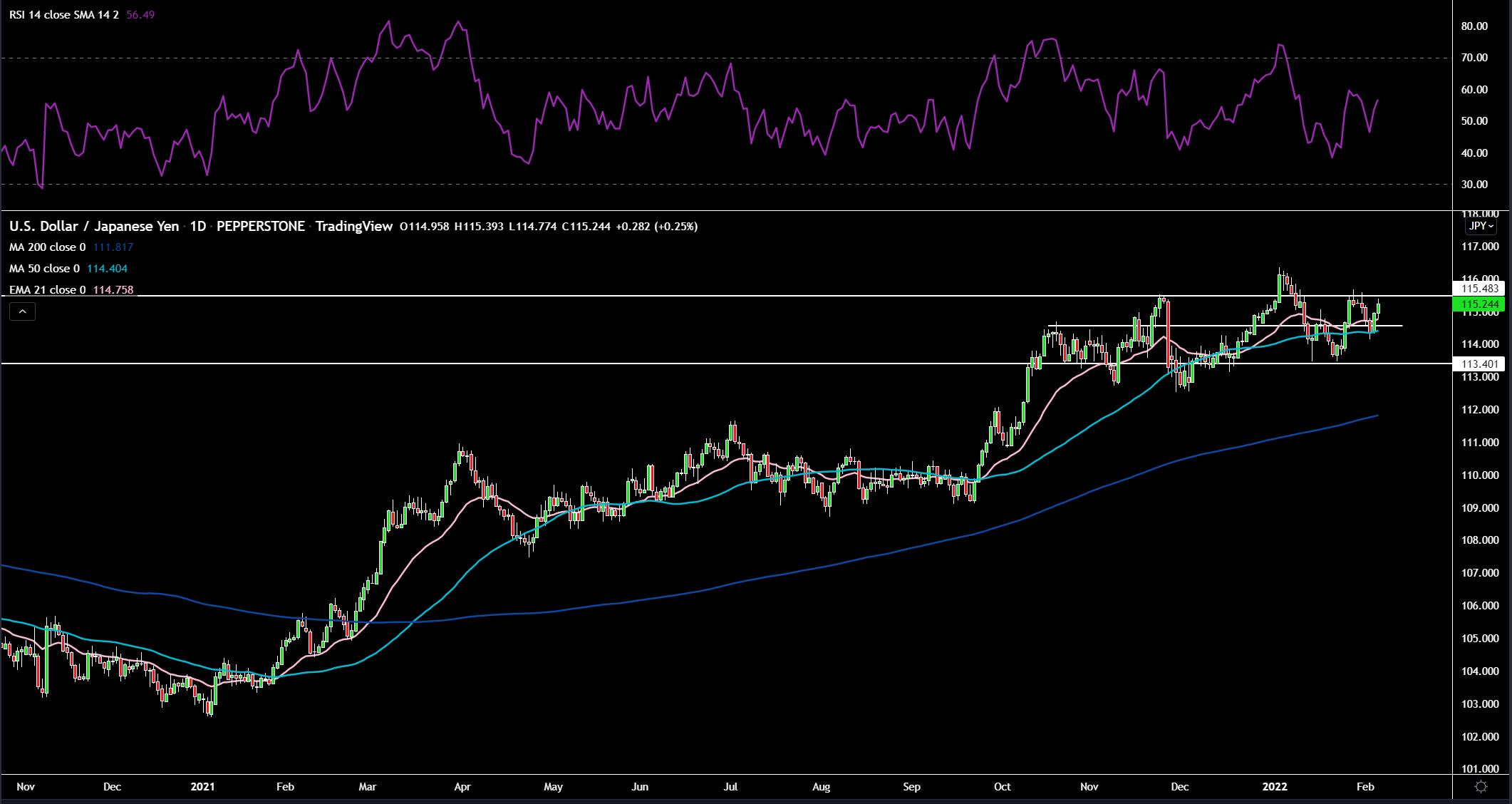 USDJPY found support from its 50-day SMA and has now sprung higher, bringing the 115.48 resistance into play. The RSI is crossing the 50 threshold too. On the downside, 114.5 would be good to watch on sell offs.

Gold’s positive price action until yesterday’s hawkish central bank meetings can be described simply by – 1) real yields drifting lower and 2) weaker dollar 3) punchy inflation readings out of Europe. The hawkish pivot by the ECB spilled over into US 10-year real yields which surged higher hurting gold, before quickly reversing lower and buyers being drawn in. NFP wasn’t good for gold as real yields surged and this also led to dollar strength, both headwinds for the yellow metal. 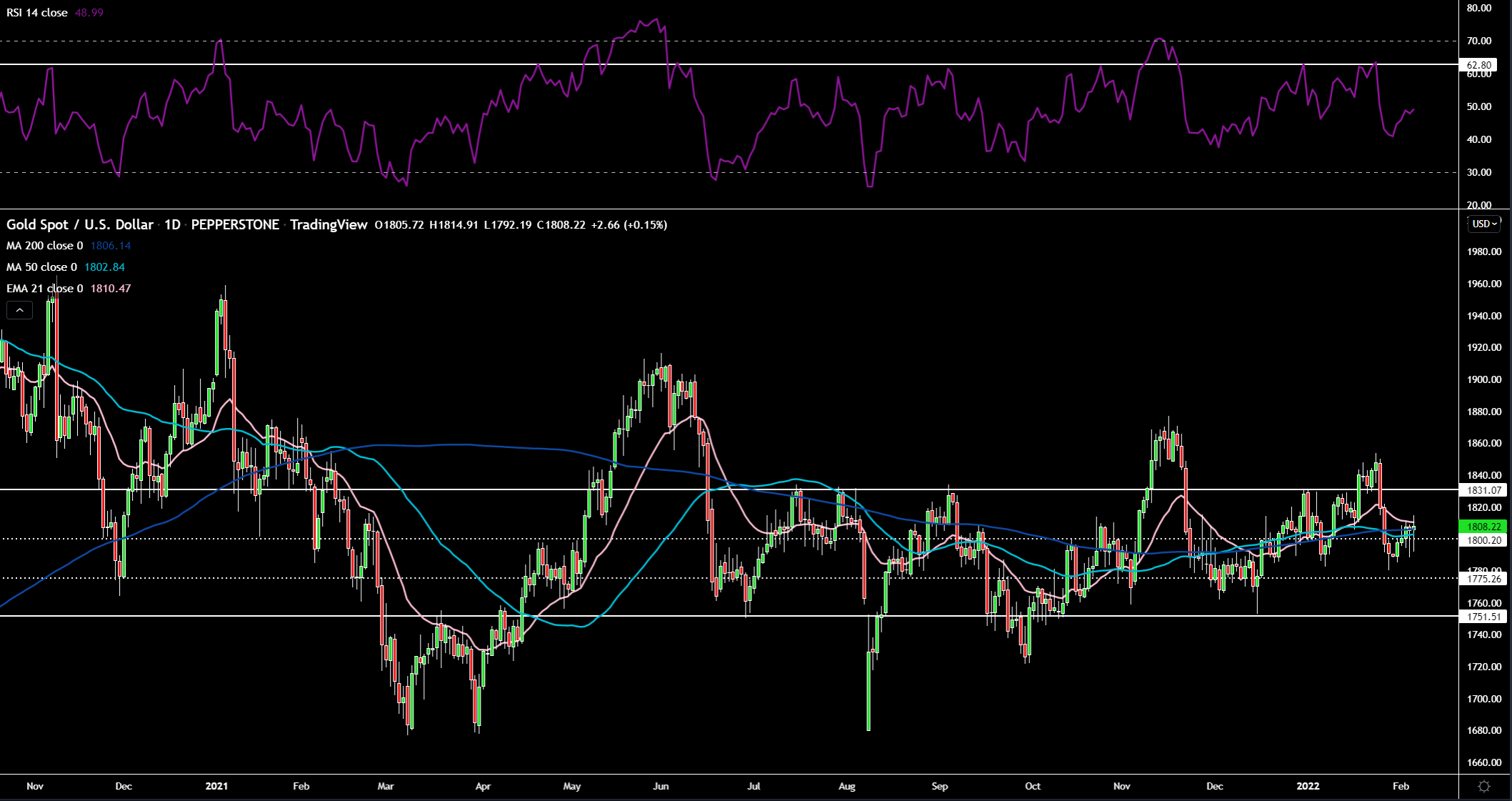 Price continues to fluctuate tightly around the $1800 level, showing how it acts like a magnet for price. Also, bunched up are all the moving averages. The RSI is pointed lower around the 50 level too. $1815 would be where I’m looking for pushes higher and $1775 on pushes lower. 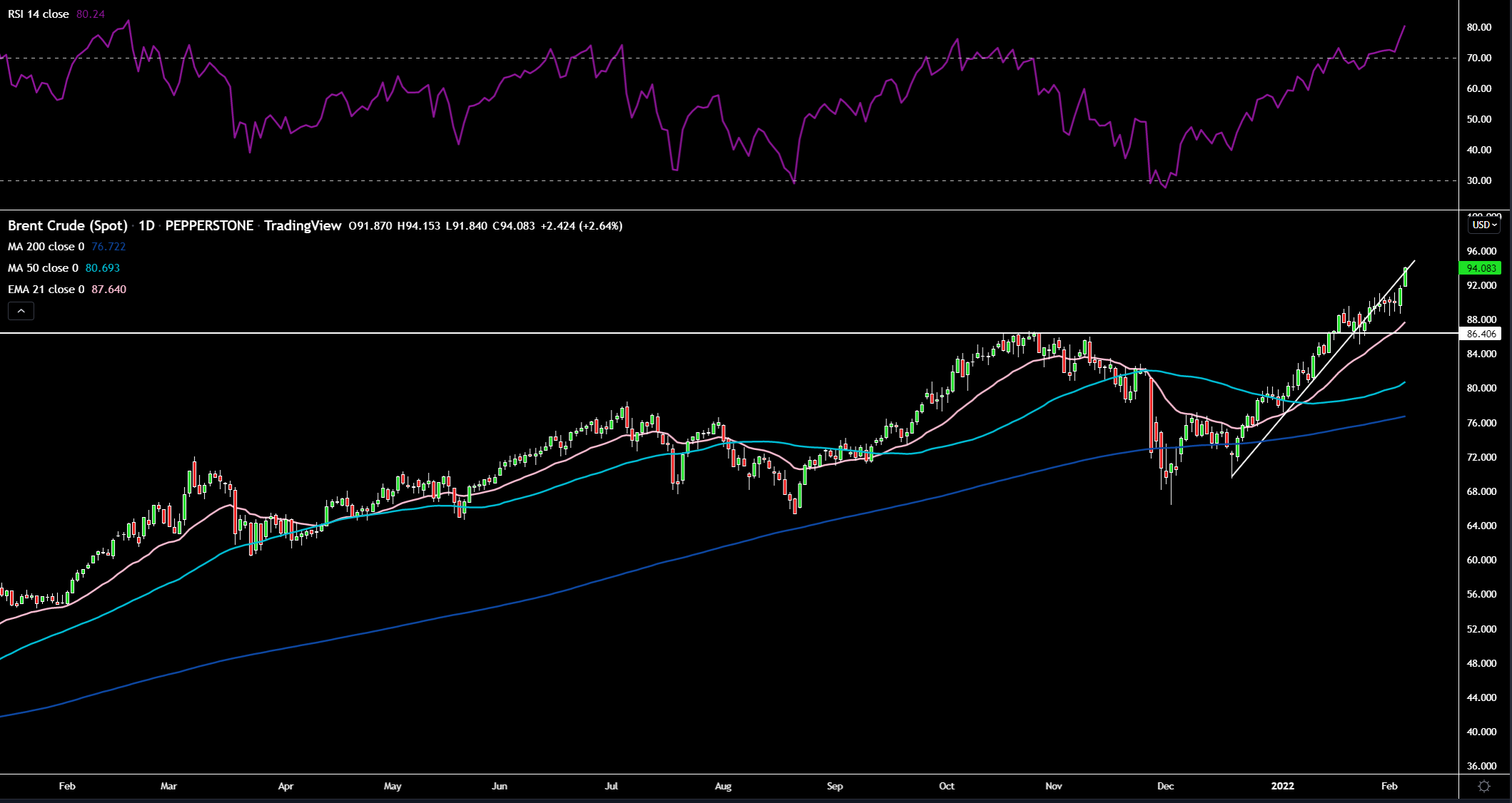 Price candles are trying to reclaim the uptrend line which was broken recently. The RSI is in deep oversold territory and there is a fair bit of distance between the 50-day SMA and price. $95 is definitely in view with the momentum behind this rally. Rising despite a stronger dollar is a good sign. On the downside, $91 saw some stickiness so would be one to keep on the radar for a retracement lower. 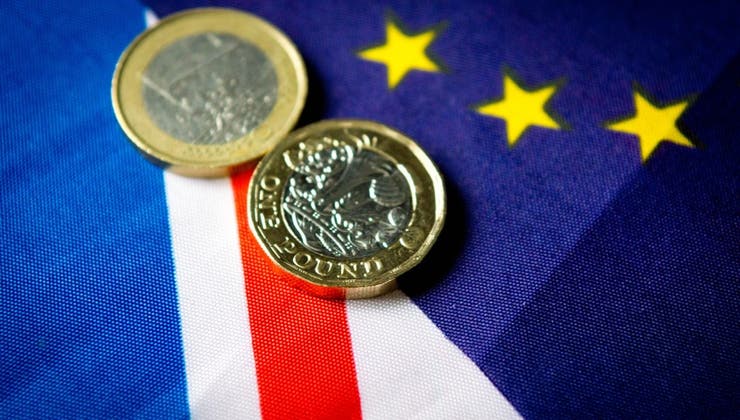 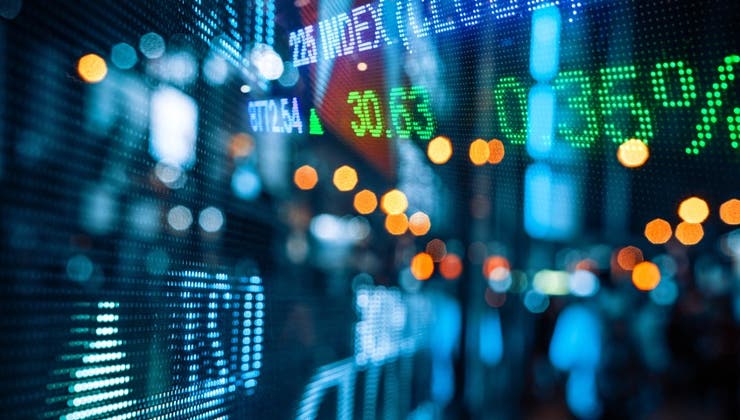 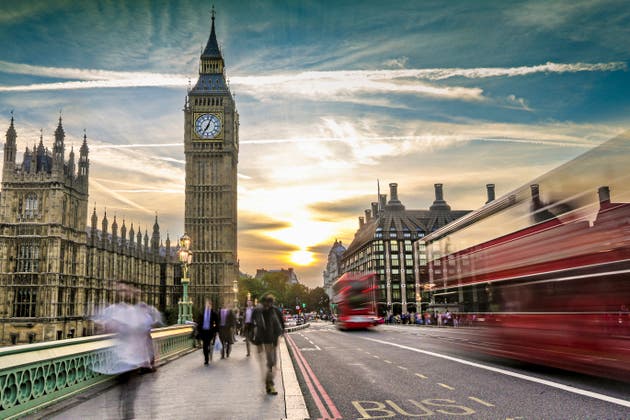 Bank of England Preview: Back to back hikes?