The Daily Fix: Oil volatility is a sight to behold

Chris Weston
Head of Research
Share
The bears are certainly getting the upper hand, and today's Asian open is looking fairly dicey as the various indices start to unwind.

The bears are certainly getting the upper hand, and today's Asian open is looking fairly dicey as the various indices start to unwind.

While we’ve seen the USD outperform, I can’t go past moves in the options markets, with oil volatility (vol) moving like a freight train, and there are a few charts that suggest trading in a more defensive tone for now. I won’t go through all the news flow, as price tells the clearest story here and maybe I’ll cover off on most the news and views in tonight’s webinar, which if you haven’t sign up for and are keen.

Once again, when it comes to focal points, the session belonged to crude and while we saw June crude trade into $6.50 (our ‘spot’ crude price traded to $3.39), and we’ve seen June Brent crude into $17.51. The move in implied vols that have materialised have been incredible.

The CBoE oil volatility index for example, traded in a monster range of 517 to 213 today, although it ultimately closed up an impressive 99-vols on the day at 325.

This implies that crude will move (higher or lower) by 20% a day. So, consider since the futures re-set June crude is +21% and July 13% and despite this being an incredible percentage change, it feels effortless.

The ICE exchange has announced they are preparing the Brent futures to accept negative prices, so that is one to watch as we head towards expiry on 30 April. Although the June WTI expiry on 19 May will be the main event.

If we look at the crude 1-month risk reversals - that being the difference between 1-month crude 25-delta call volatility minus put volatility, we’ve seen it blow out to -78 vols. That is an insane move. Options traders are saying if there is a move the downside move is going to be far greater than any upside move.

As we can see, price never really took off from the March lows, or should I say it did but now it has rolled over hard. Clearly, the lack of follow-through highlights that crude wasn’t affected by the Fed’s buy everything program, in the same way, equities and credit have.

Inflation expectation rolling over - This chart also throws weight to the notion that volatility is going to stay high and that I should be trading on the defensive side of the ledger. For perspective, from the March lows US 5-year inflation expectations/’breakevens’ (blue) moved sharply higher and this put a backbone, not just into the S&P 500 (orange), but gold too – which I have left off. US 5yr Treasury yields (white) remained anchored through the move, with the Fed ramping up its QE program and no one is going to fight the Fed here – as inflation expectations moved up faster than bond yields we saw ‘real’ yields falling and this not only boosted the equity market but weakened the USD.

Maybe it’s been driven by crude, but inflation expectations are now rolling over hard and this is boosting real yield. This could be very influential to the risk trade, as well as where to for the USD.

In terms of FX vols, we’ve seen a slight move in petro-currency volatility, but they haven't been as punchy as I would expect. This is also quite interesting, as I would certainly have expected vols to ramp up and FX traders are taking a calm approach to the madness seen in crude markets. 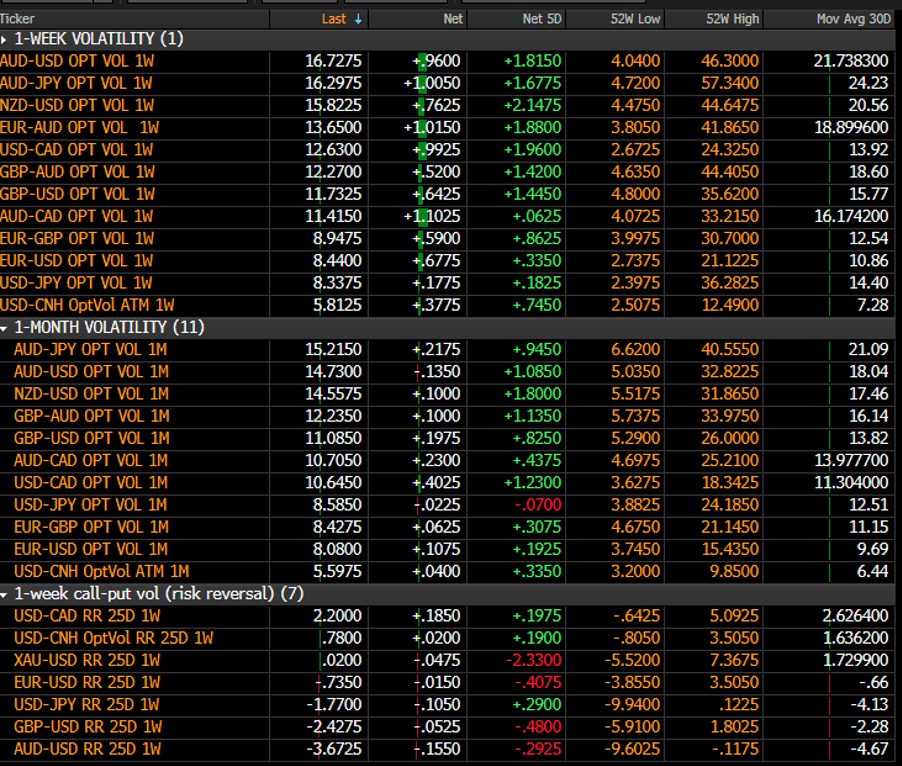