Homepage/Is the market too complacent over a Brexit deal?/
GBP

Is the market too complacent over a Brexit deal?

Share
And so Summer ends, children finally go back to school and we are no closer to a major breakthrough in EU-UK Brexit talks, as we forecast in our last Brexit update in June. Focus in the game of chicken now turns to the next formal negotiation round which is scheduled to take place in London on Monday, with the market still fairly calm over a trade deal, even as the mood music has turned a shade darker.

Next week’s talks mark the start of the final phase of discussions that both the EU and UK accept need to be wrapped up by the end of October if a deal is to be in place in time for ratification for when the UK’s post-Brexit transition period expires at the end of the year. 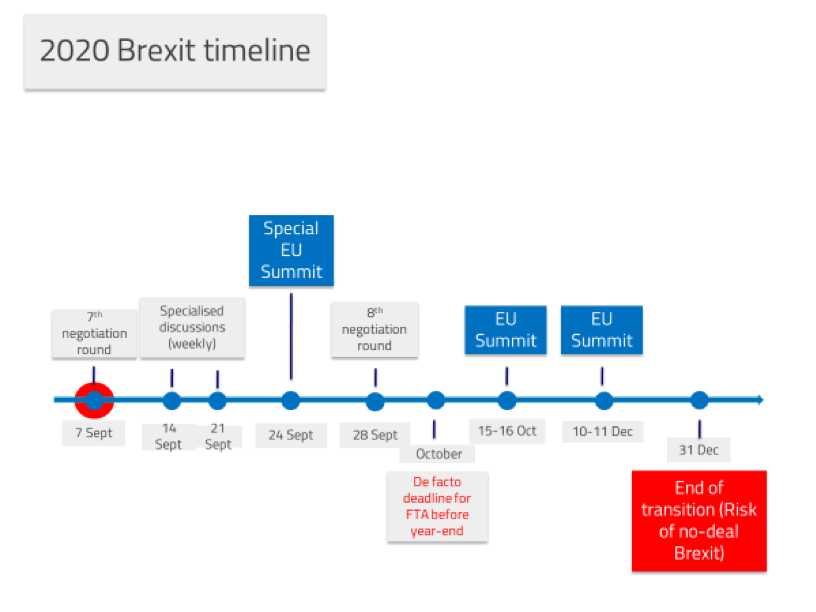 The two sides remain at loggerheads on various issues, the two thorniest are well-known now - fisheries and the level playing field rules. The latter is designed to prevent the UK from undercutting the EU in the future and while the EU does seem ready to move away from its maximalist stance of demanding dynamic alignment of rules, wrangling has continued over the nature of controls on subsidies and the dispute mechanism.

That the UK Government is still discussing exactly what it wants in this area is adding to the uncertainty, although it is expected to produce a statement of intent on state aid at the end of this month or in October. This is proving difficult at the moment with the divisions in the Conservative government between clearly defined post-Brexit controls and enforcement mechanisms on the one side, and a more flexible regime with the freedom to intervene in industries on the other. Of course, taking back control to pick and choose which industries to subsidise does not go down well in Brussels, who are further wary of the UK becoming a ‘Singapore on Thames’ with low taxes and regulations.

The issue of fisheries turned into a slanging match this week with Michel Barnier, the EU’s chief negotiator, accusing London of wanting to turn European fishermen into a “bargaining chip” in the talks. The UK is said to have presented informal documents this week with its proposals, but many on the European side believe the UK position has not fundamentally evolved at all over the Summer.

With the weeks ticking on and little advance in the negotiations, the chances of a comprehensive deal are all but over and the risk of a no-deal has risen slightly over the last few months. The UK has formally rejected in law any transition period extension (though this could be overturned potentially) so the EU and UK would trade on WTO terms from 1 January 2021.

However, the most likely scenario and one the market is gunning for, is still a simple free-trade agreement covering only goods and not services, with some form of further implementation period for firms to adjust to the new relationship. The start of October is seen as the ‘soft’ deadline for an agreement ahead of the EU summit in mid-October where the hope is that EU leaders will ratify the agreed proposals in time for the end of Britain’s post-Brexit transition period.

As happened in June when UK PM Johnson created a better mood for conciliation, it seems something similar is needed now to break the standoff between the two sides. Indeed, even more time may be needed towards December with the potential for another extraordinary EU summit to get a deal done. There is history here as this is what happened during the talks on the withdrawal agreement when Johnson met the Irish PM very late in the day.

Brinkmanship is a well-known trait of EU talks and pragmatism does suggest some form of trade deal is in both sides’ interests. Of course, politicians are not prepared to agree a deal at any cost and up until that point where one side moves, headlines and the prospects of a no-deal outcome will ramp up in the coming weeks.

The market is certainly adopting a relaxed attitude with sterling net positions jumping to 5-month highs recently. This is not surprising considering the recent good performance of GBP positioning, but it does point to a high degree of complacency with regard to Brexit. The risk of a negative outcome in the trade negotiations is currently under-priced and more stress and volatility in GBP may be seen in the weeks ahead. We may well also get more and heavier stimulus from the Bank of England before the December deadline, as the strains of the pandemic recovery and the additional costs from Brexit begin to hit firms and potentially employment prospects.