How to trade an unexpected event with technical analysis

FX Evolution
Technical Analysis
Share
Non-Farm Payrolls and the resilience of the US economy.

2019 will likely be remembered in the financial world as the year of the trade wars. With phase one of the trade deal now signed with China, the US economy is showing strong signs of growth, causing a surge in indices such as the S&P 500 and the Dow. On Friday 17 February, one of the more important news events of the month ‘Non-Farm Payrolls’ was released with the US economy adding 225,000 new jobs, far outpacing the 163,000 forecast. This news coupled with the trade deal and other strong numbers is giving traders an opportunity to revisit their charts and potentially identify new trading opportunities.

The relationship between the US Dollar and other currencies

The US Dollar index is made up of the following currencies:

The US Dollar index has long been regarded as a great instrument to carry out technical analysis studies to evaluate the strength or weakness of a currency. This analysis can then be used to help traders apply a bias on dollar strength and more specifically, compare it to the EURUSD, where the Euro makes up approximately 57.6% of the index weight. If a pattern or trend is presenting on the USDX, traders can generally assume that the EURUSD will have an inverse reaction. As an example, if the US dollar is strengthening, the EURUSD will most likely be weakening. This cross analysis is specifically beneficial when looking at long-term timeframes and patterns. 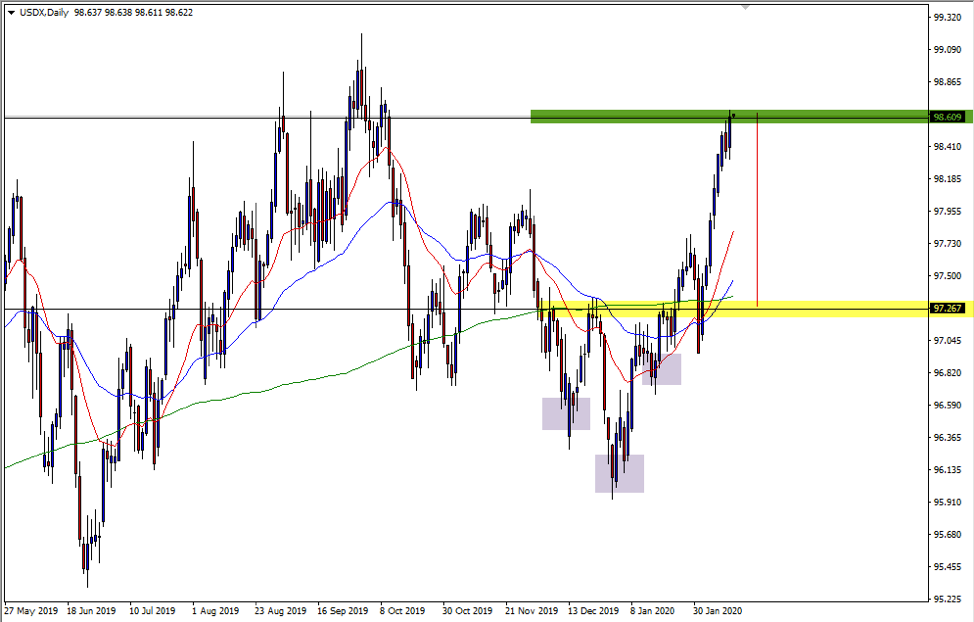 Even before the strong 17 February Non-Farm Payroll result, we saw a strong pattern on the USDX. This is a great example of an inverse Head & Shoulders pattern where the right shoulder is higher than the left, indicating bullish momentum. Another nice technical in this trade was where the USDX broke past the neckline (the yellow highlighted area). You can see that price broke the 200 Daily SMA soon after. This was followed by a cross of the 20 (EMA) and 50 (EMA) in the direction of the trade, providing a volatile but sound role reversal opportunity to enter the trade long after the break in the 97.26 zone. 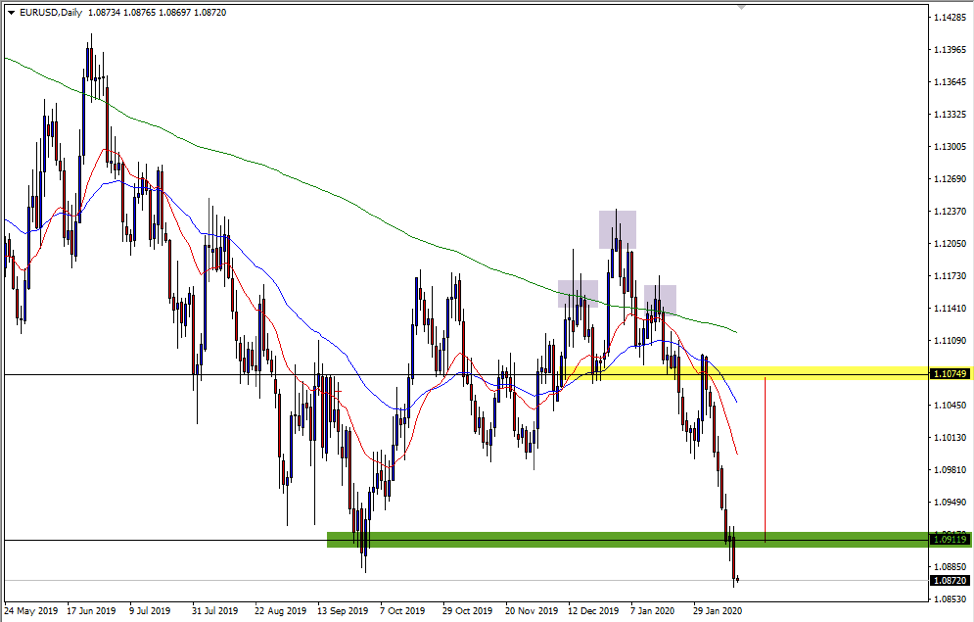 As mentioned earlier, what happens on the USDX generally occurs inversely on the EURUSD. Above you can see another head and shoulders pattern with a break of the neckline (the yellow highlighted area), followed by a cross of the 20 (EMA) and 50 (EMA), creating another role reversal opportunity to enter the trade short at the 1.1080 zone.

The risks to China’s GDP and economic outlook

The recent outbreak of the Coronavirus in the Hubei province has shaken the worlds’ markets, and all eyes are now on China’s management of the situation with millions of people flocking to cancel their planned holidays. From an economic standpoint this couldn’t have happened at a worse time for China. With an already slowing economy due to the trade wars and the potential need for further stimulus from the CCP, China’s GDP figures are under a real threat and volatility is increasing. 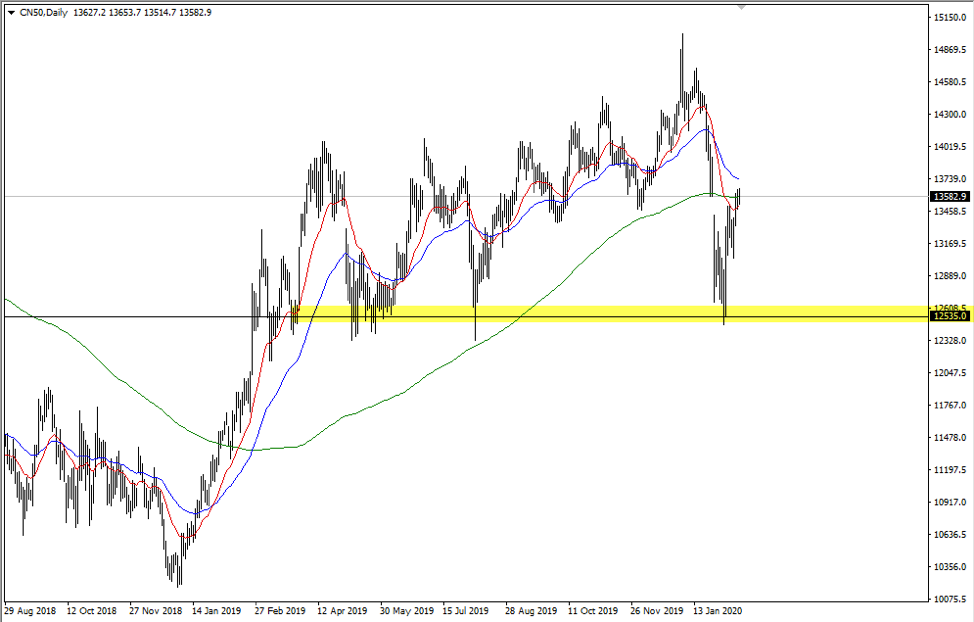 The fallout from news of the Coronavirus was sharp and fast on the CN50 index, but as the yellow highlighted area on the chart above shows, a key level that has acted as support several times in the past is again propping up the price.

The CN50 index divergence on the 4hr time frame 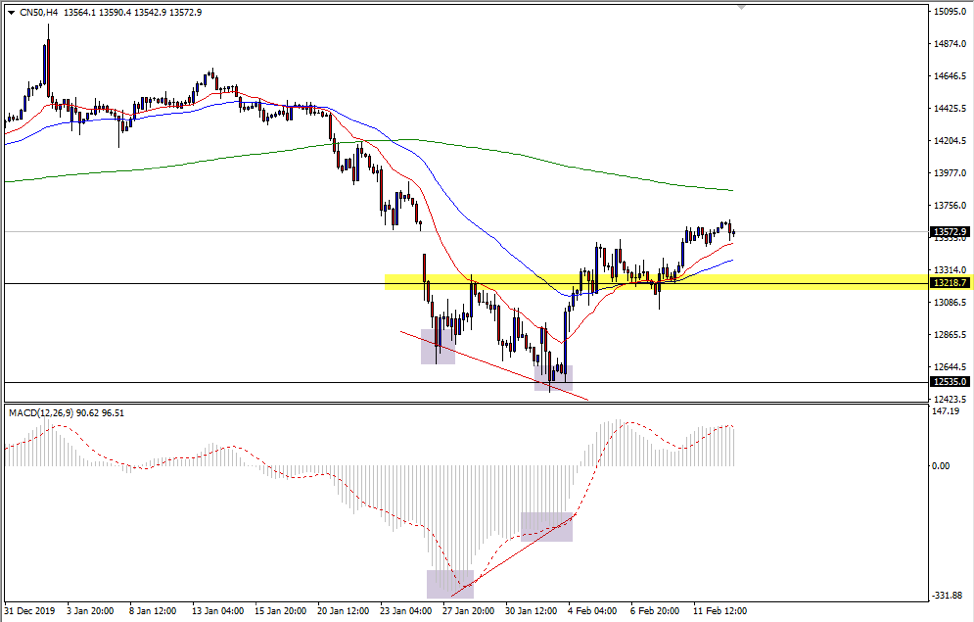 The chart above shows a new lower low being formed by price into the daily 12500 support level. Meanwhile, the MACD indicates a weakening signal, with the new lower low formed by price not being replicated by a lower MACD level. This chart action demonstrates Class A bullish divergence. The break above the yellow highlighted zone confirms further bullish momentum, indicating that the initial selling of the market may now be over.

The practice of cross correlation like the above USDX and EURUSD examples are important tools in any technical analysis traders’ arsenal. Similarly, when unexpected news events occur, it is important to look at the key levels and wait for confirmation before making any trading decisions. The analogy ‘never try and catch a falling knife’ is certainly a mantra that might be worth considering on the next news event.