Homepage/Gold outlook bullish ahead of US election/
Gold

Sean MacLean
Research Strategist
Share
Not long to go until the US election and gold may be done with its multi-month consolidation. The fundamentals remain bullish, so which way does gold break as election day draws closer?

Gold (XAUUSD) has started the week of 11 October on the back foot, falling modestly on Monday and extending losses in the asian session Tuesday. The move comes after a stellar run higher on Friday, when the precious metal gained 2.4% against the USD.

But once again, mention of the US dollar is keen here. For now, gold remains mostly responsive to movement in the US dollar, as price continues to consolidate after it slid from record highs in July. Although mostly a USD move, XAUUSD did break above three major indicators: the 5-day EMA (green), 20-EMA (blue), and 50-EMA (purple). The 5-EMA is supporting gold so far today but if price closes below this indicator, I’ll be neutral on gold once again until I see conviction of another leg higher.

Not only did price take out the three EMAs on Friday, but all three indicators crossed over on the day. Does this mean the multi-month consolidation is over? If so, what’s the catalyst and which way might gold break? Anyone following the newscycle will immediately casts their mind to the upcoming US election: Trump vs Biden. Start trading gold today.

The US election is probably the next big catalyst for gold, and the possible election outcomes must be considered to understand how price could move.

Consider that the situation markets want to avoid at all cost is a contested result. The eventuality could throw markets into chaos for weeks, so markets need a landslide win either way to have certainty around the future. As long as their’s an obvious winner on the day, markets will likely respond in kind - and although the outlook for gold remains as bullish as ever, we may see a temporary sell-off in gold simply due to the good news and some risk unwinding.

Where gold could fall is anyone’s guess, but I have three levels in mind. Firstly I’m watching the 100-day MA (orange), currently at 1866, which supported price late September. From there, 1800 is an obvious support level as this is where the bulls broke higher on their run to record highs in July. Not far below 1800 though is the 200MA (black line) at 1745 - this would also be a nice level to fall to.

And even the most bullish gold bugs should want to see a deeper correction - these help clear out the market and ensures a healthier long-term bull run. Amid fiat currency debasement and record deficit spending from fiscal policy, the fundamentals give the gold bugs a lot to run with in the coming years.

Considering the fundamentals, I would expect any sell-off or correction in gold to be temporary. This will especially be the case if we see a clean sweep on election day, whereby one party takes control of each the White House, senate, and the house of representatives. This setup gives a legislative majority and the winning party the ability to pass whatever they need - this is especially important for any fiscal support packages, which have hit stalemate time and time again this year with house democrats and republicans unable to reach agreement.

But a certain colour of clean sweep offers a far more bullish case for gold in the long-run - and it’s in line with poll predictions.

Biden and the democrats are carving out a larger and larger lead over the incumbent, and flying US stocks may be a reflection of investors accepting the polls and anticipating a blue wave next month.

And you’re right to think that in normal times a democrat sweep would actually make markets cautious - especially with a corporate tax hike and big-tech regulation on the agenda. This time is a little different.

It’s becoming a consensus that the bullish case for the US economy and its stock market is for government to step in with stimulus to help spend the way out of the crisis. Although the Trump administration has overseen record deficit spending, the democrats are prepared to do more. Biden’s plans for presidency include stimulus spending of up to $4 trillion over the next ten years.

The record deficit spending is a positive for gold in itself, but the big spend will also help debase the US dollar and drive a reflation trade. We’ve also got the US Federal Reserve pursuing a higher inflation mandate, which will require an ever weaker US dollar. The US dollar index (below) hit more than a two-year low in September.

There’s already pressure from the Fed for the US dollar to go lower - a Biden administration may exaggerate this trend.

Of course, anything can happen in the next three weeks and the dreaded prospect of a contested election could still be a possibility. A contested result could throw global markets into chaos for weeks as uncertainty takes over and investors struggle to price the future. Gold would likely thrive amid such chaos, although a possible flight to safety in the US dollar could counteract any significant moves higher.

Not only is record deficit spending a positive for gold in itself, but the big spend will also help debase the US dollar, which will see also propel gold (XAUUSD) higher.

Whatever the outcome of the US election, the fundamentals are favourable and the case for gold remains as bullish as ever. For a gold bull like myself, I do want to see a deeper correction to ensure the long-term health of this bull market, whether the election newsflow offers such an opportunity is yet to be seen. 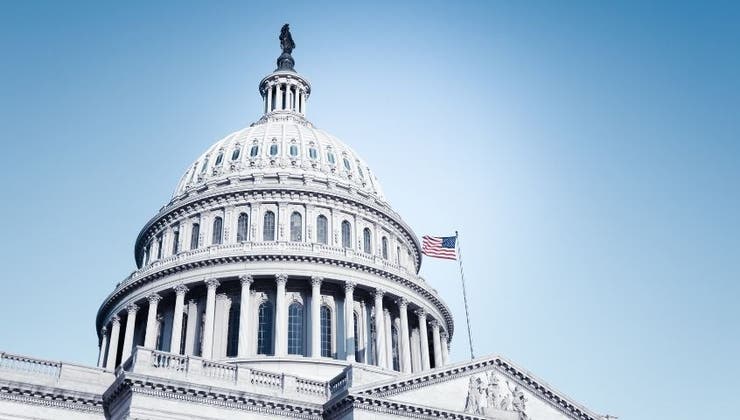