The Federal Reserve creates a risk on scenario

FX Evolution
Technical Analysis
Share
The Federal Reserve sent shockwaves through the S&P 500 last Thursday with a new $2.3 trillion dollar support plan for the American economy, causing another 5% rally to cap off the biggest weekly bullish move since 1974.

This announcement was not only large, but well-timed, coinciding with the weekly unemployment claims which came in at a staggering 6.6 million workers filing for unemployment.

As at the date of this article, unemployment in America now stands at 22 million. While all these record setting numbers have been coming through, we are now in America’s company earning season, with early indicators showing an incredibly mixed bag of results. The question remains that with so much uncertainty, which are the best currencies and commodities to trade, and how do you trade them?

Donald Trump plans to re-open the American economy sooner rather than later, with his administration giving guidance to America’s governors last night that they can start to think about re-opening, possibly even before the previously pencilled in date of the 1st of May.

With the daily cases beginning to slow, (as seen in the chart below) the plan is to get Americans back to work as soon as possible, as the current economic damage is obviously severe. This announcement sent the S&P 500 up a further 3% last night, with a movement of money into RISK on assets. Below we will look at some key areas to watch as technical traders on WTI Crude, EURUSD and USDJPY. 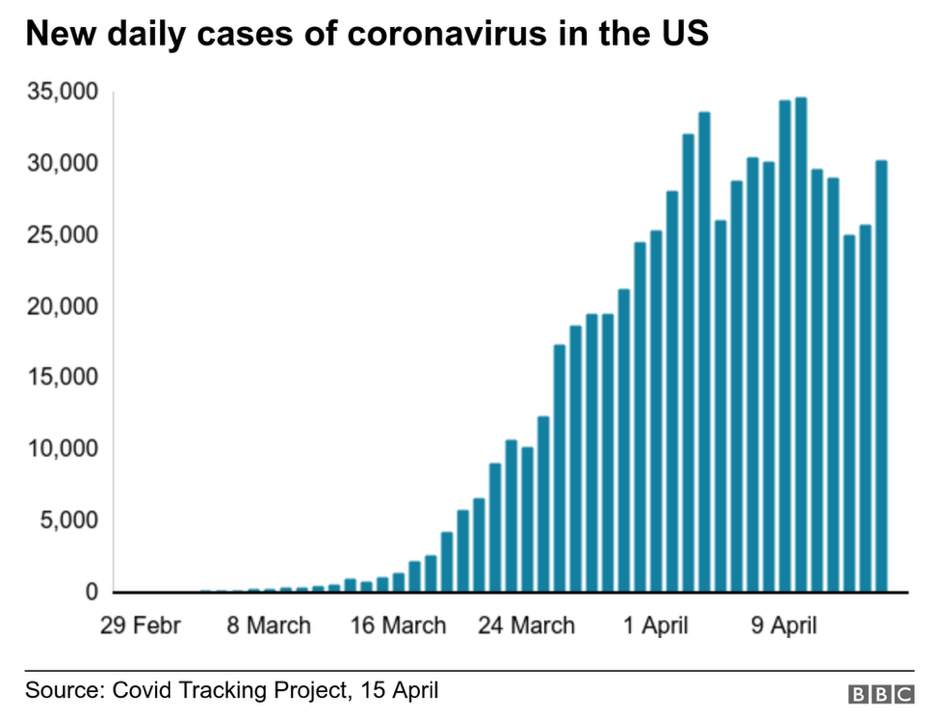 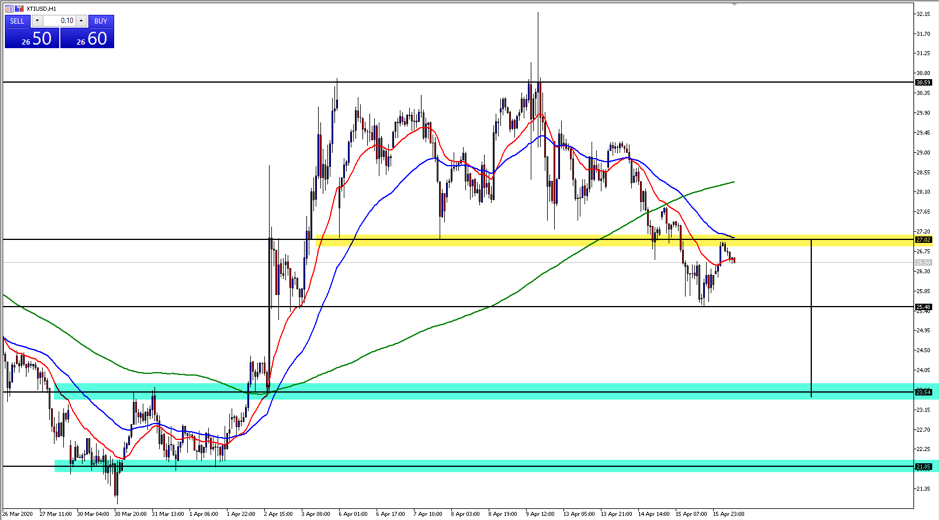 The chart above shows WTI crude’s wild ride over the last few weeks. With lows at $21.00 and highs at $32.00, crude’s percentage daily changes are mind boggling. The historic OPEC deal that was struck did little to convince the market that oil should be going up, with weak demand due to the global shutdowns driving prices lower.

From a technical perspective, the $27.00 a barrel level (highlighted in yellow) has provided a key level of support on the 1-hour chart. This level is now acting as a role reversal zone, where $27.00 becomes a resistance point, making it an especially important level for traders to monitor. Another close below the lows of $25.40 would expose the two previous points of support highlighted in green at $23.54 and $21.85 as the next potential target.

EURUSD breaks through a key trendline 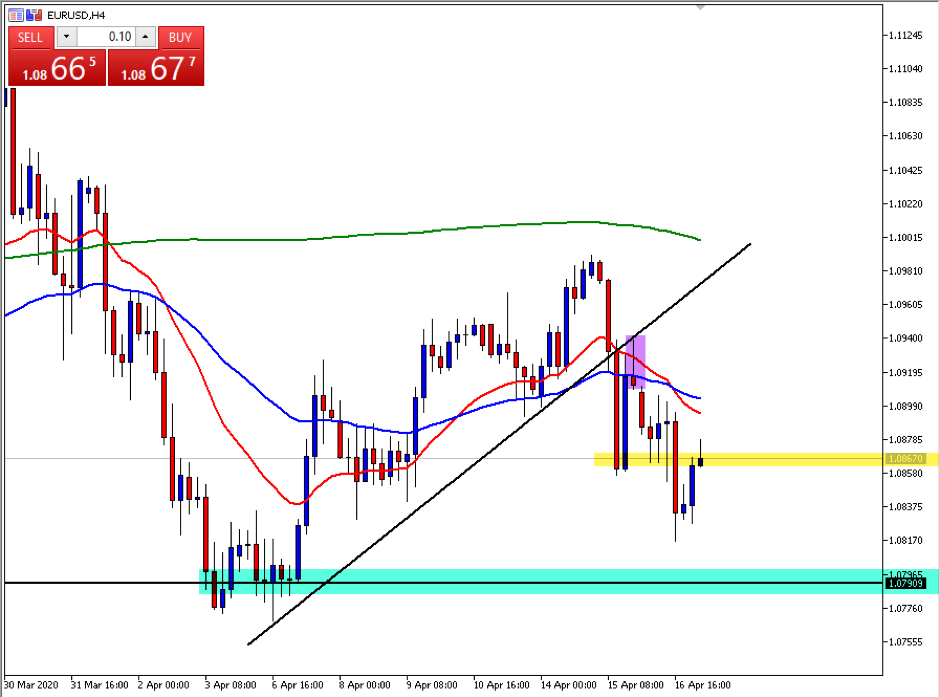 The chart above shows a trendline that was broken on the EURUSD on the 15th of April when price moved below 1.09200. This break was quickly followed by a rally that pushed price back into the trendline which acted as a role reversal area, where previous support became resistance.

What is interesting about this chart is the candle that forms after this rally, (highlighted in purple) where a shooting star candle has formed, indicating bearish sentiment. The price action that followed this candle has been amazing, with a close below the 1.08670 lows, (highlighted in yellow) and then a retest of the zone which we are currently seeing. The next level of support is at the 1.07900 area highlighted in green.

USDJPY finds support at the 1.07 zone 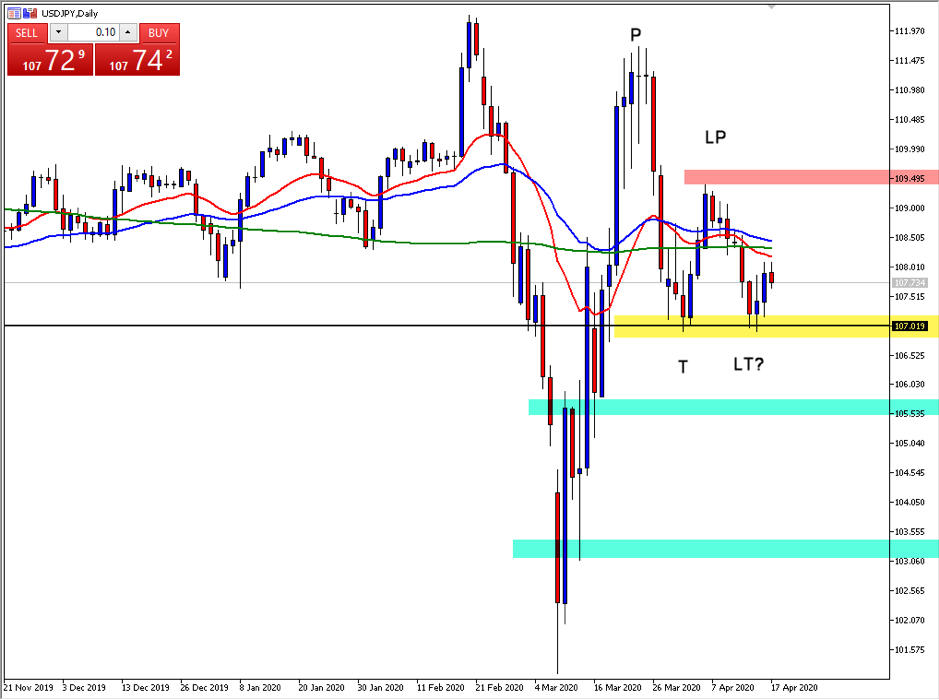 The chart above shows the USDJPY finding support at the 1.0700 area highlighted in yellow. The interesting thing about this zone is that it can be viewed two ways from a technical standpoint. If price was to continue to bounce up from the 1.0700 zone and break through the area highlighted in red at 1.0950, a double bottom pattern formation would have occurred, and this would give traders a clear signal that the market is potentially bullish on the daily timeframe.

However, if price closed below the 1.0700 area on the daily timeframe, we may see the two zones highlighted in green become the next areas of support. This price action would form a lower trough on the charts and signal a change of trend on the daily timeframe from the previous bullish momentum.

One thing everyone can agree on is that the outbreak of COVID-19 is causing major economic harm to all nations in lockdown. The problem for traders is trying to figure out how long this may last, and whether the current economic stimulus packages are too little or too large to support the global economy.

It remains to be seen on these matters but at times when the Volatility Indicator (VIX) is above 20, it can be beneficial to move your current trading strategy to a shorter timeframe, as moves are quick and sharp. Generally, it is scalpers and day traders who tend to perform better during these periods, and it’s certainly worth adapting your trading expectations to the current market conditions.