Homepage/ECB Preview: policy under a cloud of uncertainties/
EUR

Luke Suddards
Research Strategist
Share
Will the ECB move now or use this as a placeholder meeting. Read below to find out more.

Thursday’s ECB meeting should be a relatively calm affair with an autopilot approach the most likely outcome. So where do things stand at present? At the last meeting the ECB communicated an APP purchase schedule of €40bln in April, €30bln in May and €20bln in June. Q3 was signalled as a potential expiry date for the programme (albeit data dependent). The sequencing path expected by most in the market is a termination of APP in July followed by a 25bps rate hike in September.

The risks going into this meeting are tilted to the hawkish side in the event the ECB decide to pull the trigger earlier and wrap up APP at the end of Q2 in June, and pulling forward the rate hike to July (the market prices this with a 62% chance). I think if this was to happen it’s more likely to occur at the June meeting when new economic forecasts will be available. There’s not enough data to evaluate the impact of the war on the eurozone economy yet and the war itself is still very uncertain. Lastly, the uncertainty around the French Elections should see the ECB utilising this meeting as a placeholder before June. However, that being said the minutes were pretty hawkish with some GC members wanting APP terminated in the summer and believing forward guidance conditions for lifting rates had been met or were close to being met. They were also fairly upbeat on the eurozone’s economic outlook despite very obvious headwinds. This was also pre euro area inflation reaching its highest level since the inception of the euro. At the same time, wage growth, a key data point for the ECB has not increased to levels (3%) which they believe would violate their inflation target.

The press conference will be interesting to see if Lagarde makes any comms errors while trying to convey flexibility and data-dependency. Markets are currently pricing in around 70bps by December 2022 and 35bps by September as can be seen in the table below (check the implied rate change column). 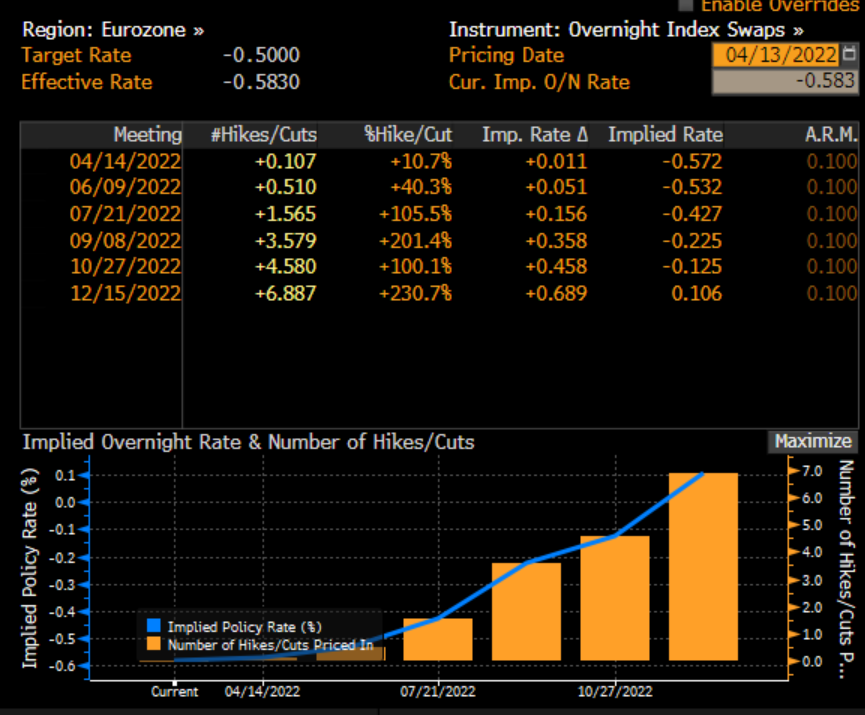 EURUSD remains around 28 pips from its March low of 1.08. The negative divergence on the RSI is a positive for the bulls who may be expecting a reversal. Could we also be seeing a double bottom forming? A breach below 1.08 would open up 1.075 support. 1.09 on the upside is the level to watch for resistance. 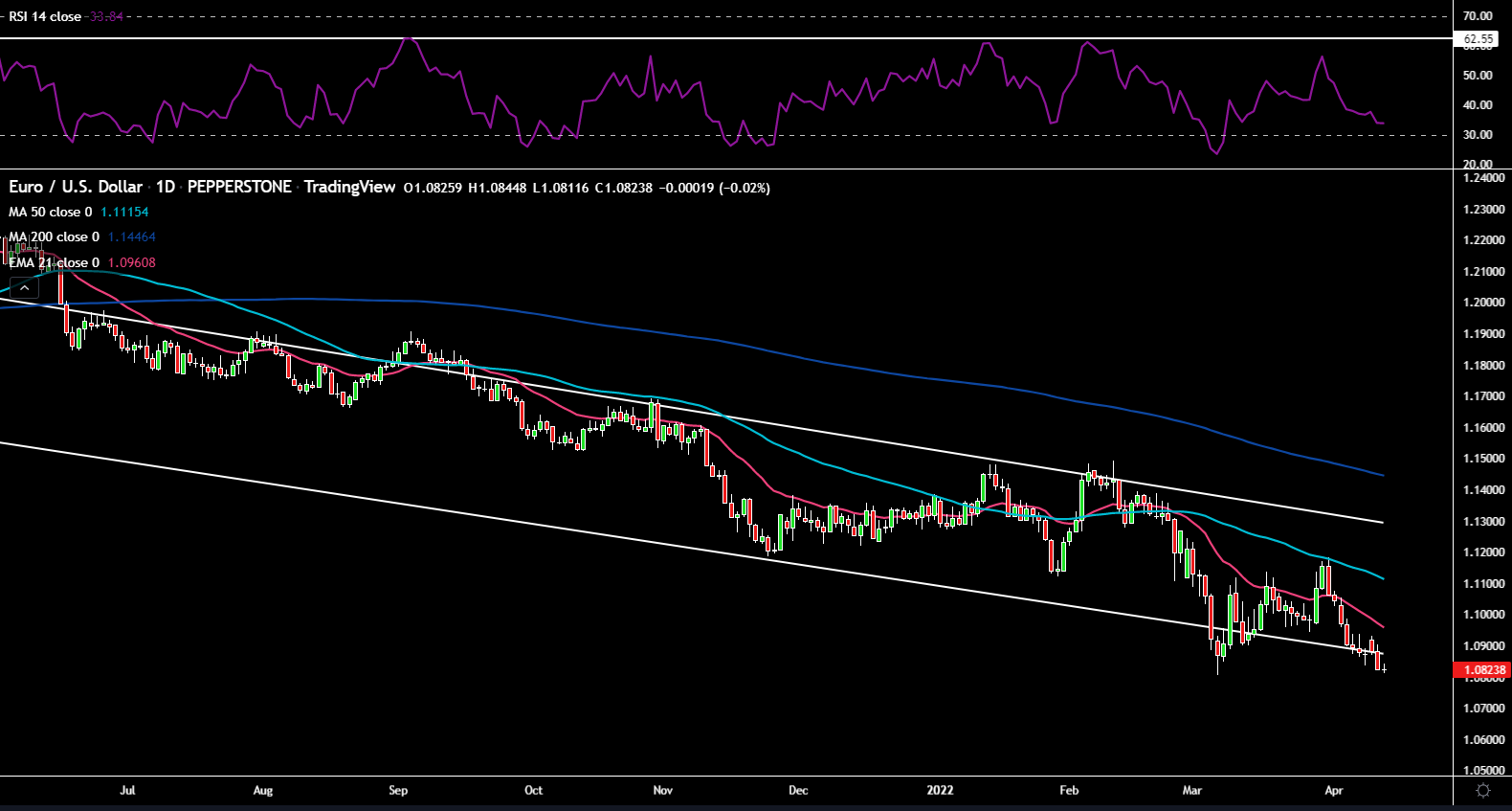 EURGBP is also close to a key support level around 0.83 and if broken could see price travel towards the former low of 0.82 with 0.825 on the way. The RSI is also showing negative divergence which could see selling pressure run out of steam. On the upside, 0.835 and 0.837 (50-day SMA) would provide some headwinds to further gains potentially. 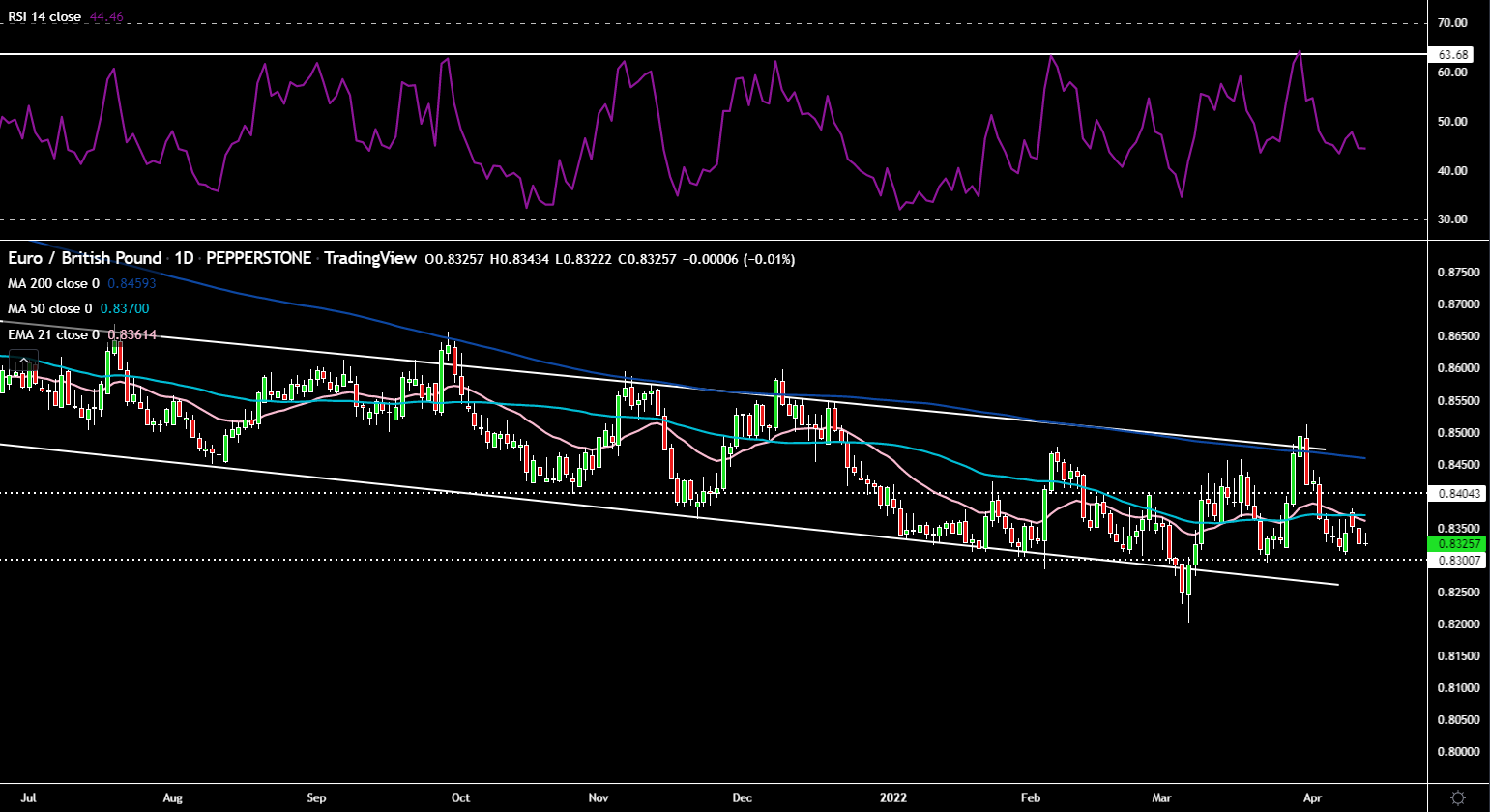