The Daily Fix: The day the oil futures turned negative

Chris Weston
Head of Research
Share
The moves in the crude market are all that is being talked about and they have reverberated across broader markets with the S&P500 closing -1.8%, inflation expectations falling hard, higher implied volatility (the VIX closed at 43.8%), with selling seen in the CAD and the NOK. Although, the percentage moves in the petro-currencies were not that pronounced given the extent of the selling in crude.

Many have been introduced to the concept of negative commodity prices for the first time, something that is not unheard of in physical commodity markets, although, it’s rare for crude to go negative and has never happened before in crude futures markets. That said, in recent times, we’ve seen negative prices in (physical) Western Canadian Select and Wyoming Asphalt Sour blends, and as we can see in this bulletin from Plains Marketing, their advertised purchasing (pricing) rates of various grades of physical crude from producers sit at very low levels.

The moves in the May futures contract have been the talk though, with prices trading to -$40.32 at its worst, before settling at -$32.75. The May contract expires today and rolls into the June contract tonight, for those who don’t roll or close can take delivery of the physical on 1 May.

The contango (i.e. the steepness) seen between the May and June futures contracts ballooned out to a record level $58.06 at one stage (see Bloomberg chart below), although has come back into $19. In a normal contango markets, traders expect to pay up for the next-month futures contracts (as full interest is encapsulated in the price), but if for some strange reason you’ve left it until now to roll it would have really hurt. This is certainly the case many who recently bought into the USO ETF who have felt the roll down in its full force.

Difference between May and June crude 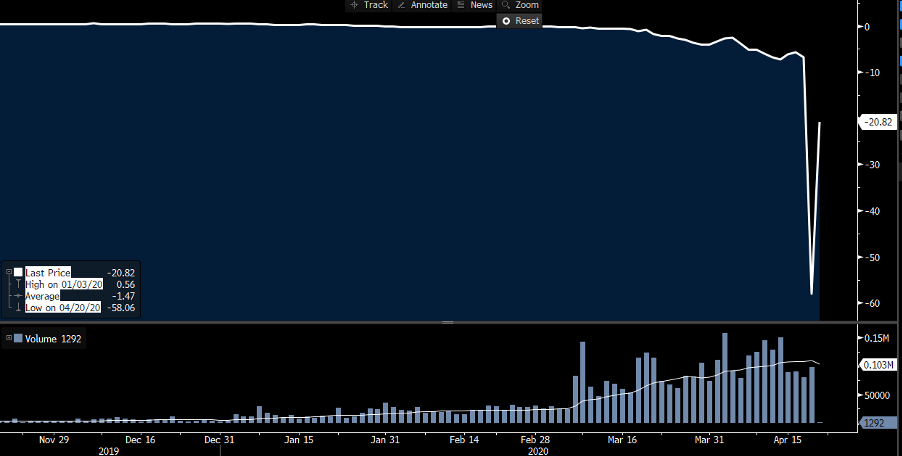 The fact that May futures were so weak and so deeply negative going into today’s futures rollover has caught everyone a bit by surprise. Granted, oil traders have not been trading the May contract for days, moving into June futures well before, but the fundamentals were clear and the potential for weak prices elevated.

The oil dynamics in play

We know demand has dropped off a cliff given the sheer downturn in global economics that is likely going to result in a sizeable global oversupply of crude, which many believe will be close to 9m b/d through Q2 – importantly, the OPEC++ agreement to cut back on supply doesn’t kick in until 1 May. And in the US, specifically, which of course is the backdrop to which WTI crude reflects, there are fewer places to store oil. For example, crude stocks at Cushing (Oklahoma) sit at 55mm barrels and around 25% away from hitting capacity although other facilities are even more constrained.

Testing the capacity limit seems likely given the trajectory in the massive inventory build (in the US) over the past four weeks, which has promoted the storage issue to the forefront of trader’s considerations. It can be expensive to shut down wells, although, we have seen the US oil rig count falling 35% since mid-March. But it isn’t enough to change the supply/demand imbalance. Logistics also make a huge impact, because we know WTI production is landlocked and transferred via pipelines, so this dynamic offers less flexibility when it comes to storage - if you’re an oil producer and have excess capacity and the refineries (you’re selling too) have no immediate need for the product you may pay them to take the crude off your hands – hence we get negative oil prices.

These logistical dynamics are different in the physical Brent complex which is waterborne and can be readily transported out of the US and into China, Asia (more broadly) and into Europe.

The fact that this shipping process can take a greater length of time is also quite appealing for refiners and a further reason why Brent crude trade as a premium to WTI crude. Consider a Chinese refiner can buy Brent crude and know that by the time they receive the delivery in several weeks, global supply cuts may have kicked in, and even signs of demand may emerge. WTI delivery occurs is a matter of days, so once you have bought the crude, it’s with you before market dynamics can change.

Can we see support for June crude?

So, while the media focus has been on the May futures move, the reality from oil traders is that June is where we should be looking, as the open interest has been five times this of May and volumes in the June contract have been staggering, even for the rollover period. The question then evolves to what keeps the June price from cratering in the near-term?

Well firstly, the OPEC++ cuts will likely be pushed forward from 1 May. Donald Trump has said the US is looking to add as many as 75 million barrels to the US’s Strategic Petroleum Reserves (SPR), which would take some of the excess capacity from the market. Trump is also talking about stopping shipments of crude from Saudi Arabia, which will support near-term. Price will tell, but demand is unlikely to come back anytime soon, and we are about to see the real economic weakness in the April and May economic data flow.

So, the move in May futures is unprecedented but the supply/demand dynamics, married with storage issues and the futures expiry created a perfect storm. The big issue for the market is what measures will be put in place now to counter a similar move to June and July futures as its clear falling oil prices are not going to sit well with risk assets. The forward curve tells us that better times are ahead, but it doesn’t mean we’re not in for another volatile period for the near-term contracts.