Homepage/Could markets throw up some surprises before Santa arrives?/
UK

Could markets throw up some surprises before Santa arrives?

Share
Traders should be weary going into the end of 2020 with Brexit still not concluded and one last FOMC meeting to contend with tonight.

GBP/USD has been firm since Sunday’s decision to extend talks, rallying off its 200-day SMA from 1.32 up to an intraday high of 1.355 today. This is due to news of movement on the very thorny issue of the Level Playing Field. However, fishing still remains problematic with neither side wanting to give any ground. Most market participants believe a deal will eventually be sealed, even it means going right to the wire. The bookmakers have flipped back to now seeing a deal as the most likely outcome with popular political betting site Smarkets most recent odds showing an 82% probability a deal is completed before year end.

London has now entered Tier 3 restrictions, which will place the hospitality sector under further pressure. This swift decision came about as a result of a new variant of the coronavirus spreading rapidly in southern England. However, the UK Health Minister stated that it was highly unlikely it wouldn’t respond to the vaccine. The first mover advantage on the vaccine and return to normality is one of the key positives for Sterling.

Long cable trades are exposed to an asymmetric risk reward profile in that upside is fairly limited to around the 1.35/1.37 level with a thin-trade deal whereas on a no-deal scenario, cable could fall to 1.25/1.20 with sub 1.20 not out the realm of possibility. Positioning data is flat and at these price levels the Brexit risk premium is very small, hence shorts could accumulate rapidly. Shorts would be much better expressed through GBP/USD as the euro would undoubtedly also suffer on a no-deal outcome.

Implied vols have pared back slightly from Sunday, but are still elevated on the whole. 25 Delta Risk Reversals on the 1-week and 1-month tenure are both substantial at -3.25 and -3.5 respectively.

We have the BoE’s monetary policy decision tomorrow. I don’t expect any changes at this meeting especially with Brexit uncertainty - the bank will be keeping its powder dry and retaining maximum policy flexibility. Given the BoE already acted in November to increase its QE programme, Governor Bailey won’t feel under pressure to act. I’ll be keeping my eye out on any further rhetoric regarding negative rates. Interestingly, recently there has been pushback from some of the big banks such as HSBC and Santander on negative rates. With Santander stating systems would need 12 – 18 months of preparation in order to implement this. Additionally, HSBC pointed to the poor results of its implementation in places like Europe, Switzerland and Japan. If negative rates are decisively taken off the table then Sterling could get a much needed tailwind. 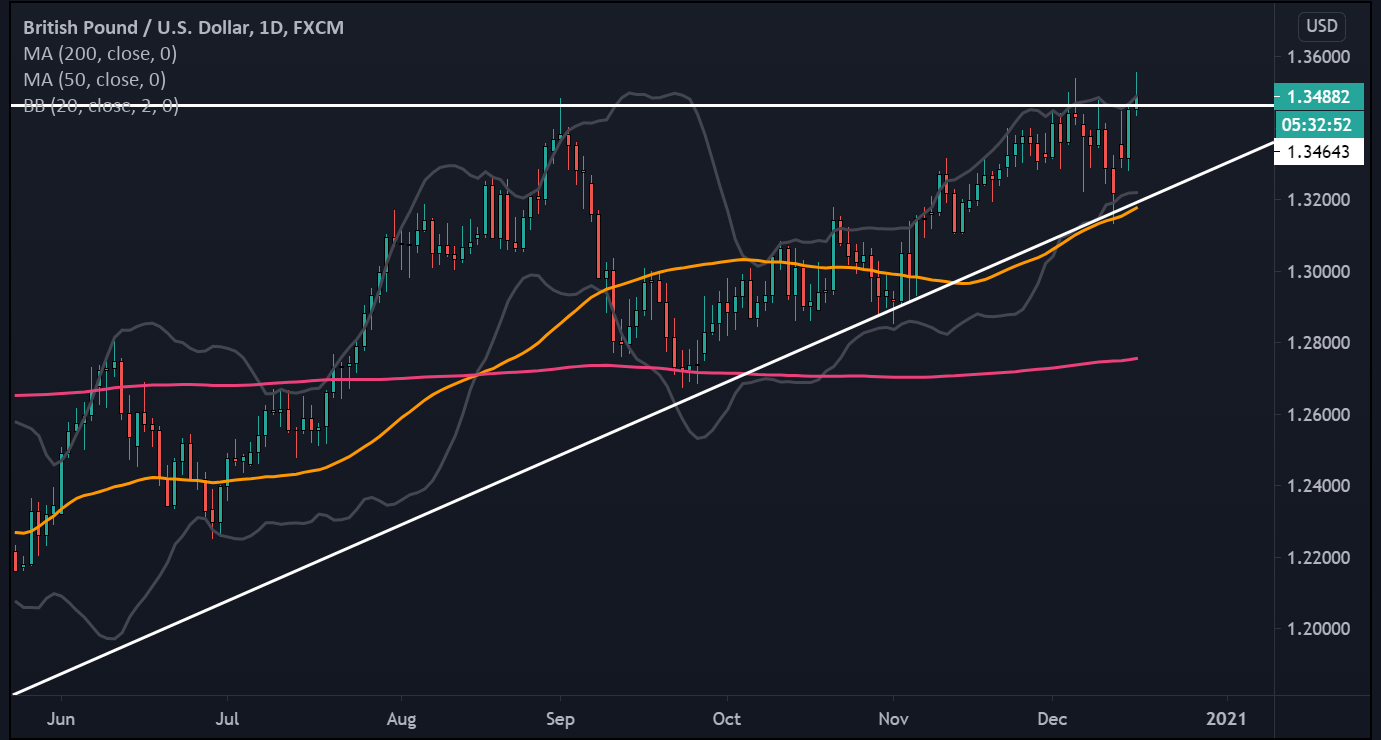 GBP/USD’s technicals look solid. Price has formed an ascending triangle pattern – typically bullish. The 50-day SMA (yellow line) is still pointing upwards and above the 200-day SMA (pink line), however, the upper band of the Bollinger Bands do seem to be restraining price. 1.355 definitely is a resistance level which needs to be cleared should GBP/USD advance towards 1.37. It does look like price needs to take a breather after rallying strongly the past 3 days. However, a surprise trade deal announcement could cause a sharp pop in the price up towards 1.37.

Gold has been a solid place to park your cash this year given how low rates have been. However, looking at the price action gold has been in a gentle downtrend since its August peak of just over $2000, forming a descending triangle pattern which usually breaks to the downside. There is important support at $1830 which if broken could see a slide to the November lows of $1770. Price seems stuck in a tight range between the 50-day and 200-day SMAs. Positive vaccine news has worked against the yellow metal and clearly seen appetite for riskier assets increase with the result being a rotation out of gold. However, increasing inflation expectations and further fiscal stimulus packages should be supportive for gold going forward. A weaker dollar will aid in this regard and ultra-loose monetary policy should keep real yields negative - lowering the opportunity cost of holding gold. ETF demand has been a key driver behind gold’s rise this year. Physical demand from consumers in emerging markets like India and China has been weak due to having to prioritize their cash flow and spending habits. However, as normality returns there should be a decent bid from this demographic as gold jewelry is a popular choice for gifts during the marriage and festival season.

The market has moved into risk-on mode with Congress on the brink of passing a $900 billion stimulus bill. Evidently there is a lot of optimism now baked into equity markets with 90% of S&P 500 constituents trading above their 200 DMA and BofA’s most recent fund manager survey shows that portfolio cash levels have fallen to 4%. The last real market moving event for this year takes place tonight as the Fed delivers their final monetary policy decision for 2020. Market’s aren’t expecting any major policy changes and any operation twist if it does happen will be pushed back to 2021. The Fed will provide clear communication to the market on their asset purchases going forward and will try to jawbone rates and the greenback lower to keep financial conditions as loose as possible. I expect more rhetoric around the need for timely fiscal stimulus. The other major event which should be on traders’ radars is the Georgia Senate run off races on the 5th of January. This has the potential to cause substantial volatility should Democrats pull off a shock victory and take all chambers of congress. This would have huge implications for financial markets, especially the dollar, equity markets and rates. Although this is not seen as the probable outcome, it certainly is not outside the realm of possibility. PredictIt has Democrats’ odds at 34%.