Homepage/FX Outlook: Busy week ahead for FX. Will the Fed underwhelm?/

FX Outlook: Busy week ahead for FX. Will the Fed underwhelm?

Share
August is often described as one of the dullest months in the forex market. By the end of next week, many near-term uncertainties will be lifted, and there won’t be many new revelations before everyone returns in September. Last week, the European Central Bank set the stage for September easing, Boris Johnson became the UK’s newest Prime Minister, and by this Wednesday we’ll know if the Federal Reserve plans to lower interest rates by 25bp or 50bp this year.

Before the August lull, there’ll be one final big burst of volatility that should dictate the overall direction of currencies for the next month. There are three monetary policy announcements this week — by the Fed, Bank of Japan and Bank of England. The July FOMC meeting is the most important monetary policy meeting of the year. The last time the Fed changed interest rates was in December 2018, when they hiked by 25bp. This month, they’re widely expected to make a U-turn and start lowering rates. In addition to FOMC, the Bank of England releases its quarterly inflation report, Australia has CPI and retail sales, and the eurozone has Q2 GDP and CPI. There’s also the US non-farm payrolls report. All of this event risk means that investors should brace for fireworks at the end of July.

Here’s a look at how all of the major currencies performed last week.

For the first time since the global financial crisis, the Fed is expected to lower interest rates by 25bp. The rate cut itself is widely anticipated as the market fully discounted the move weeks ago, after the June monetary policy announcement. The Fed has given us zero reason to expect anything except a quarter-point rate cut, so the change in interest rates will be the least market-moving part of the FOMC announcement. Instead, US-dollar traders should be focused on the votes and forward guidance. We have a number of reasons to believe the Fed will signal this week’s preventive cut is all that’s needed this year. When the central bank met in June, they made it clear that their monetary policy actions will depend on incoming data. Taking a look at the table below, activity in the manufacturing and service sectors slowed. But non-farm payrolls rebounded strongly in June, core retail sales increased at a faster pace, and stocks hit a record high. A number of US policymakers vocalised their support for a 25bp rate cut, but many of them are also describing the move as preventive and insurance against risk. If insurance is all they’re looking for, then there’s no need to set the stage for another round of easing, especially since the Fed doesn’t know if it’s necessary.

The argument can also be made for leaving the door open to another quarter-point cut. According to last month’s dot-plot forecast, at least seven policymakers favoured 50bp of easing. With inflation running at 1.6% and job growth likely to slow in July, a quarter-point rate cut is what the economy needs right now. But all of the uncertainty that led to this move remains a threat to the economy. China and the US are no closer to a trade deal, business investment continues to slow, and Chinese foreign direct investment is down 90%. Manufacturing activity hit a 32-month low amid weakening demand, and service sector activity is faltering. The chance of a trade deal being reached in the next two or three months is slim, and this ongoing uncertainty will continue to deter trade and investment activity. While a complete breakdown in trade talks will mandate another rate cut, this slow bleed could also lead to further action. The reality is that the door needs to remain open to additional easing, and Fed Chairman Jerome Powell may choose to make that clear on Wednesday.

If you’re trading FOMC, the most important parts of the monetary policy announcement will be the votes and Powell’s press conference. If the decision to cut by 25bp is unanimous (with no dissents for a smaller or larger move), and Powell keeps a tight lip on further action, the US dollar will soar. The biggest beneficiaries should be USD/JPY, USD/CHF and EUR/USD. In this case, we wouldn’t be surprised to see USD/JPY hit 109.50. If two or more FOMC voters favour a more aggressive move, and Powell leaves the door open to further action, the dollar will tank, with USD/JPY set for a move below 107. Also, in the event that there’s a dissent but Powell is noncommittal about further easing, the dollar’s reaction will hinge on whether there’s more dissent in favour of no change or a bigger cut. Since the outlook is uncertain, and the Fed’s mind hasn’t been set, the July non-farm payrolls report on Friday will also be market-moving. 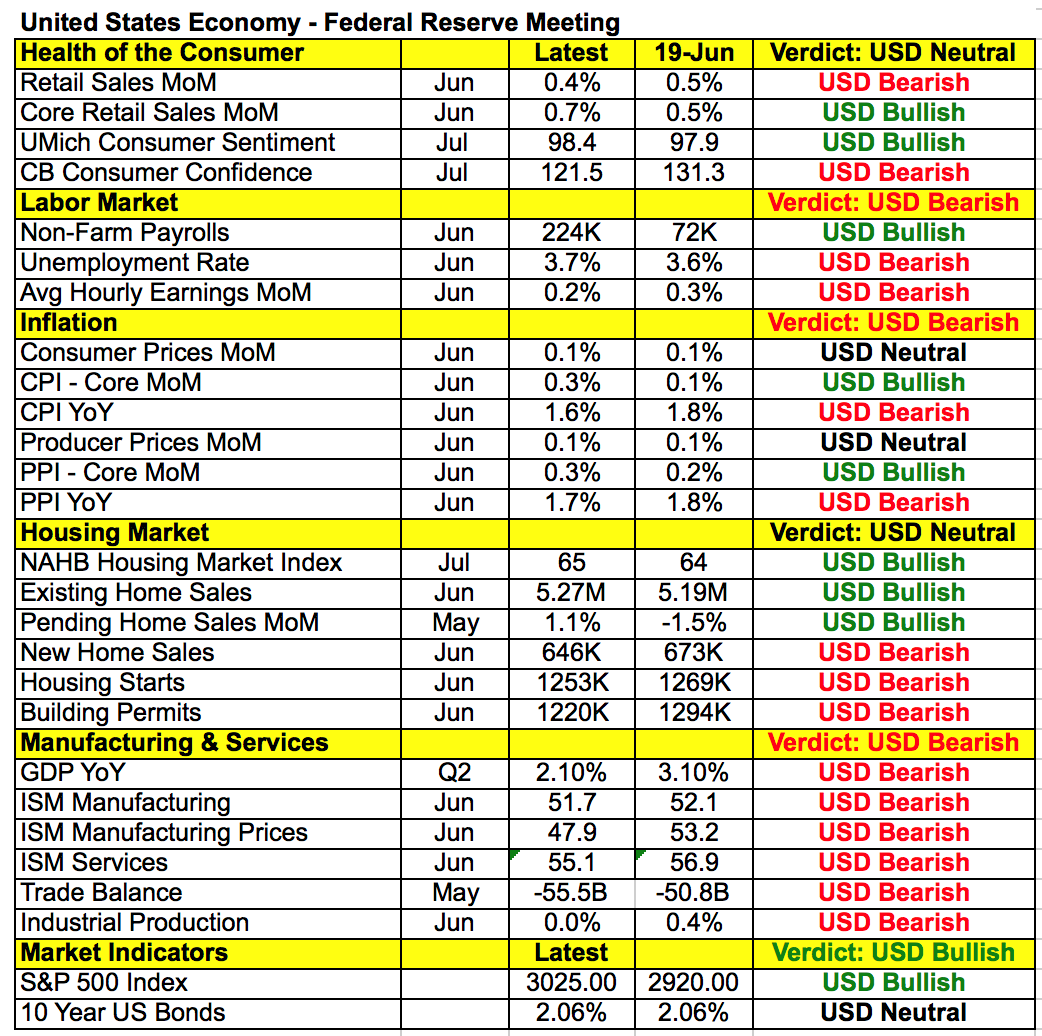 The ECB set the stage for “significant monetary stimulus” last week. According to its president Mario Draghi, the outlook for the eurozone is worsening due to low inflation, weak employment, slow wage gains, softening global growth, as well as geopolitical and trade concerns. As these uncertainties mount, the need for stimulus grows, because the ECB expects growth to weaken in the second and third quarters. In response, the central bank is considering a variety of options to combat low growth and low inflation in September. This includes a deposit rate cut, tiered system for rates, new asset purchases (quantitative easing), and a change in their targeted long-term refinancing operation (TLTRO). The only question is, how much the ECB will ease in September, and what options will Draghi leave his successor Christine Lagarde with when she takes over as the central bank’s president in October. By kick-starting a newly aggressive easing program before leaving office, Draghi is locking Lagarde into an accommodative policy stance. But the region needs more stimulus, and it can be argued that by launching the program, she doesn’t need to expend political capital early in her term.

Instead of falling, the euro ended ECB day higher against the US dollar because investors expected more. They wanted Draghi to be unambiguously dovish. While he was certainly downbeat, investors bid up the currency because they were relieved that he said there was no discussion of cutting interest rates last week, the risk of recession is low, and any rate cut would come with mitigating measures. He also felt that it’s difficult to be gloomy today, which contradicts with his view that the outlook is getting worse and worse. There are also different views on how the stimulus package should be crafted. Looking ahead, there’s no question that data is weak, as the PMIs and IFO report slip lower. However, EUR/USD could move up from its swing lows, as the ECB provided a much more contained forward guidance that allows investors to shift focus to the Federal Reserve’s rate cut this week.

What to expect from Bank of England

Britain has a new prime minister and, judging from the price action of sterling last week, investors aren’t impressed. His pledge of a hard line on Brexit and a commitment to the Oct 31 deadline for leaving the European Union makes everyone nervous. The EU is open to extending the deadline, but so far Johnson appears opposed to the idea. According to the country’s new leader, “The time has come to act.” With only 18 working Parliamentary days before the deadline, the chance that an agreement will be reached within that time’s extremely slim. Although we still think that Johnson will request an extension, the EU and the Bank of England will be bracing for a no-deal Brexit. At least this is the attitude that the central bank should have going into this week’s monetary policy announcement.

Bank of England is also scheduled to release their quarterly inflation report, and investors will be eager to see if their forecasts for growth and inflation are lowered. When the central bank last met in June, they raised concerns about global growth and downside risks. However, they said, “If their forecasts are correct, tighter monetary policy will be needed.” Their base forecast is for a withdrawal agreement to be reached, and it’s unclear if that’ll happen. We expect the BoE to acknowledge the increased risk of a no-deal Brexit, as well as the disruption that it could have on the market. But at the end of the day, they won’t make any changes to monetary policy until the terms of exiting the EU are known. This is political decision with major economic consequences.

With that in mind, if central bank reiterates that “tighter monetary policy will be needed” if their forecasts are correct, sterling will soar because the BoE would be the only major central bank talking about raising interest rates. But if rate hikes aren’t mentioned at all, sterling will slip lower. Taking a look at the table below, consumer spending and labour market conditions improved since the last meeting, but manufacturing and service sector activity slowed. Unlike other countries where inflation is running well below target, UK CPI is hovering right at 2%. 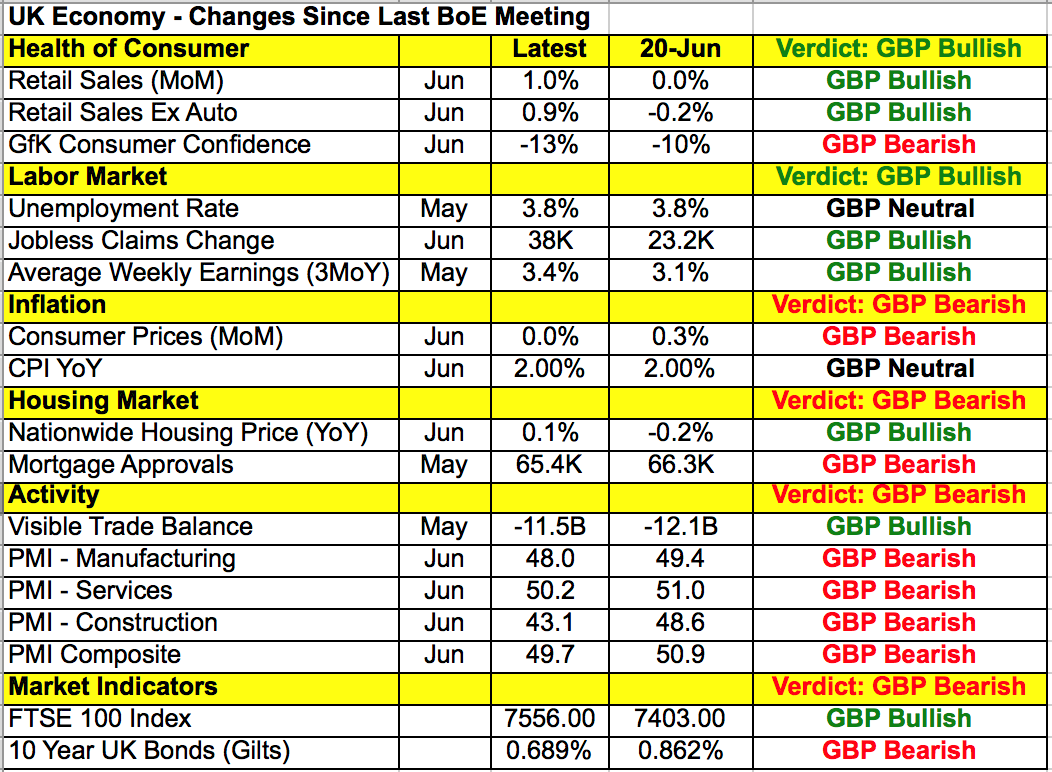 The commodity currencies will take their cue from the market’s appetite for US dollars this week. There are a few pieces of market-moving data, particularly for the Australian dollar, but the FOMC rate decision is the main event. With that in mind, all three of the commodity currencies traded lower last week, and these moves have carved a bottom in USD/CAD. There were no major economic reports to trigger the turn, which was driven exclusively by the recovery in the US dollar. This week, the greenback is likely to consolidate in the front of the week, and a big move expected on the back of FOMC and NFP. Australia’s CPI, retail sales and manufacturing reports will be important, but the reaction to these reports will be easily erased by the US dollar’s moves. Nonetheless, we believe this week’s Australian data will harden the case for another rate cut by the Reserve Bank of Australia. Inflation expectations have fallen over the past few months, which signals lower CPI growth in the second quarter. Weaker business confidence also suggests that manufacturing activity weakened. There’s no New Zealand data on the calendar, but Chinese PMIs will affect both AUD and NZD.

After selling off aggressively for the past two months, USD/CAD finally found a bottom. This move was a long-time coming, because oil prices peaked mid July, and Canadian data took a turn for the worse earlier this month. Yet, the pair didn’t stabilise until demand for US dollars returned. We continue to look for a decline in the Canadian dollar, especially since GDP growth should be pressured by softer retail sales and trade by weaker manufacturing activity. In the near term, USD/CAD will be influenced by the market’s appetite for US dollars. So, if the Fed is less dovish, USD/CAD could squeeze up to 1.33. If they say rates could fall further, even softer Canadian data may not stop the loonie from turning higher.