Chris Weston
Head of Research
Share
In an environment where companies like Nvidia and Microsoft are doing everything right, Alibaba (BABA) seems to be headed in the opposite direction.

Alibaba can be traded either long or short on both MetaTrader 4 and MetaTrader 5.

Granted, the investment cases are vastly different, but when you’re hot you’re hot and when you’re not the negative news is heard far more frequently.

When trading CFDs it often pays to follow the flow of capital and in this case, momentum seems to be the best strategy. Buying strong, selling weak can be beneficial to balance the odds in one’s favour. 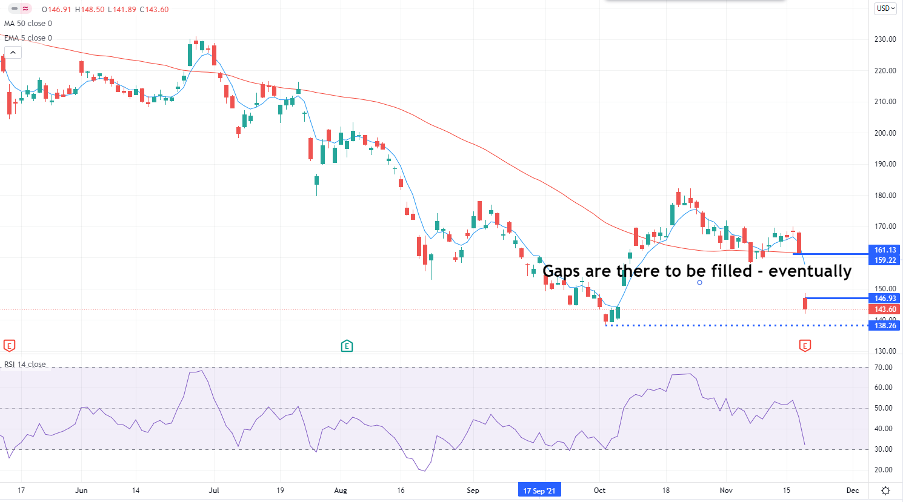 BABA is in this camp where bad news has followed the trend lower. Given the slowdown in China’s retail sales and consumption data it's perhaps not a huge surprise that Q2 22 total revenue missed consensus expectations by around 3%. Granted, total revenues did grow 29% YoY but expectations had already been lowered into this earnings report, so the bar to beat was quite low.

In this market, investors are drawn to companies that are consistently beating expectations. BABA isn’t one of them, at least at this stage.

CMR (Customer Management Revenue) and commission revenue growth of 3% missed consensus, but this was largely a result of soft gross merchandise volume (GMV), which of course is linked to China’s macro backdrop and economic trends. If the share price is going to reverse and trend higher, we need to see signs of consumption picking up. At this stage, the view is we see CMR growing a modest 4-5% in 2H22.

With all these factors at play, perhaps the most pertinent point was that BABA revised its FY2022 revenue guidance to +20-23% YoY, which implies sales will be between Rmb860b-882b - well below consensus expectations of Rmb910.

So, while there were aspects in the numbers to like, on the whole, this was a very disappointing result and the market dumped the stock hard, closing -11.1% - the biggest 1 day fall this year and the second-biggest decline since listing.

Volume was also large, with 61.57m shares traded, over three times the 15-day average. It feels likely that in the session ahead we should see another day of solid volumes, and generally speaking, if I was going to buy this pullback with any real belief, I’d like a couple of days of falling volumes to know the liquidation is done.

Technically, there is not much to inspire the bulls with BABA trading through the 50-day MA and into $141.89, before finding support ahead of the October lows of $138.43. If we see a closing lower low and I’d expect short selling activity to pick up with the stock targeting $118.

Fundamentally we could argue that even after this downgrade that BABA is trading at a compelling valuation – at 2.29x price to 2022 sales, or 13.9x 2022 earnings one can understand why 55 of 60 analysts who cover BABA have a ‘buy’ rating on the stock – most would argue this valuation is not representative of the value in its cloud and international business.

BABA’s core commerce business does account for half of the valuation though, and as mentioned, if the stock is going to turn around and head to $228 (the consensus 12-month price target) we’re going to need to see the macro picture in China turn around, consumption to kick up and some of the huge investments made by BABA start to feed into the bottom line.

What will traders potentially do?

For now, we may say this is fundamentally cheap but with the stock likely in the doghouse in the near term, until we see evidence of a turnaround the trading capital will likely sell rallies into $161.13 (to close the gap) or go outright short on a closing break of $138.43.