Chris Weston
Head of Research
Share
We argued in last week's ‘Traders’ week ahead playbook’ that with an unwavering focus on inflation Fed officials may look to push back on easier financial conditions.

So, while the technicals pointed to further upside, from a tactical perceptive, we could see headwinds to risky assets. What transpired was that various Fed members, even well-known doves such as Mary Daly, did indeed push back and held their foot firmly down on the inflation-fighting peddle, reducing the growing belief that we’re close to a major pivot in Fed policy.

The Fed may have given us reasons to think twice about buying risk, but ultimately the US500 and NAS100 closed up 0.2% and 1.9% respectively, with the VIX eyeing a test of 20% and US high yield credit spreads coming in 41bp (on the week) to 4.28% - the rally in risk showing huge resilience despite a super strong non-farm payrolls report on Friday and consumer credit ($40.1b) that lifted the odds of a 75bp hike in the September FOMC meeting to a 68% chance. The March 2023 fed funds future (the current peak in the fed funds future curve) rose a massive 21bp on Friday to 3.64%. We also saw US 2-year Treasuries rise 40bp on the week (to 3.22%) to refocus the bond bears target to the 14 June highs of 3.45% - US real yields have pushed up sharply as various parts of the US yield curve head deeper into inversion.

This dynamic in rates/bonds is statistically a USD positive and if continues should become a dominant headwind for equity and gold appreciation this coming week – subsequently, with US CPI the marquee event risk, if this comes in at 8.8% YoY (0.2% MoM), then calls for a 75bp hike will be the clear consensus. I suspect the market will also look into the breakdown of price pressures within the inflation basket, but the initial core focus falls on the terminal rate – the highest estimation of where the fed funds could head – and the prospect it can push above 4% and perhaps even higher. This is the backdrop where I see risk rolling over, with volatility rising, defensives outperforming, and better shorting opportunities should kick in.

Technically, the USD is looking attractive again, certainly vs the JPY, which is really just a proxy of the US bond market – with USDJPY now testing the 50% fibo of the 138.39 to 130.39 drawdown, a break here and I’d favour moves for ¥137, which is the implied range top priced by options implied volatility (with a 68% level of confidence) – the USD also remains the hedge against equity drawdown, holding the highest inverse correlation with the NAS100, while offering decent levels of carry too. With that in mind, downtrend resistance (drawn from the Jan highs) on the NAS100 was respected on Friday, so the bulls will need a closing break here to take the index to 13,630, and given we’ve seen a steady increase to short the NAS100 from clients, many in the retail trading community are seeing this trend resistance as defining.

If US bond yields push higher this week as the market senses the Fed pivot isn’t on, then after a 20% rally we may see equity roll over – as always, keep an open mind and let price guide. Clearly, the equity bulls will need clearer signs of peak inflation to justify the move.

We heard from Fed Governor Michelle Bowman (voter, centrist) on the weekend, who said in a WSJ article that she “backs more rate hikes until inflation is on a significant decline." These comments seem important.

Fed speakers to give important intel to the NFP and CPI

This coming week we get colour from Fed members Mary Daly, Charles Evans, and Neel Kashkari – almost a repeat of the week gone, and therefore it allows us to really see how the NFP and CPI affect their judgement – it will likely take a number below 8.4% to get the odds of a 50bp hike in September as the default setting – this seems unlikely and while growth is a clear issue (as portrayed by the deeply inverted yield curve), for now, the idea of the Fed wanting to see a “significant” decline in inflation, amid "some softening in the labour market," keeps the market guessing about a Fed pivoting at all, let alone September. I wouldn’t want to be short USDs if the CPI print comes in above 9%.

The AUS200 gets greater focus this week with price consolidating for the past 6 bars. FY earnings come into greater effect with a few big names like CBA and QBE reporting, although the bulk of market cap get going from the 16 August.

The week ahead event risk calendar and trader playbook – if you can't read this on email, click through to the Twitter thread for increased clarity: https://twitter.com/ChrisWeston_PS/status/1555779850325340161?s=20&t=mGVaNQJ4E0SgTnz75WW3QQ

Rates Review – we look at interest rate market pricing for the upcoming central bank meeting and then the step up (in basis points) to the following meetings. As an example, we can see the market prices 67bp of hikes for the September FOMC meeting, with 38bp of additional hikes in the November meeting. 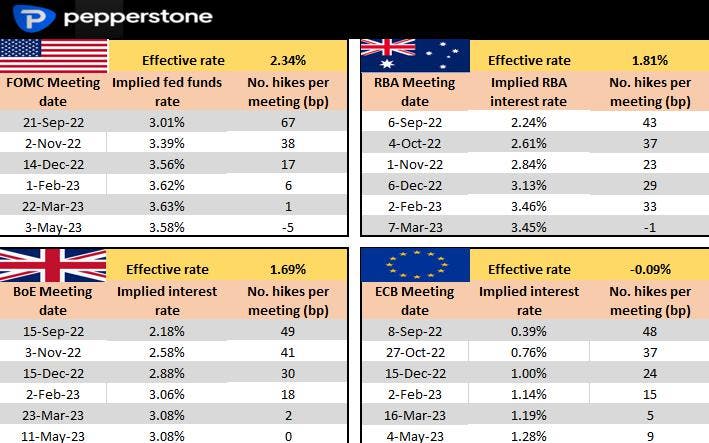 Implied volatility (IVOL) Matrix – taking into consideration the event risk disclosed above we look at the implied moves, which are derived from options pricing. We can calculate the expected move on the week and project to get an expected trading range with a 68.2% and 95% level of confidence. Good for understanding the perceived risk on each asset and for mean reversion. 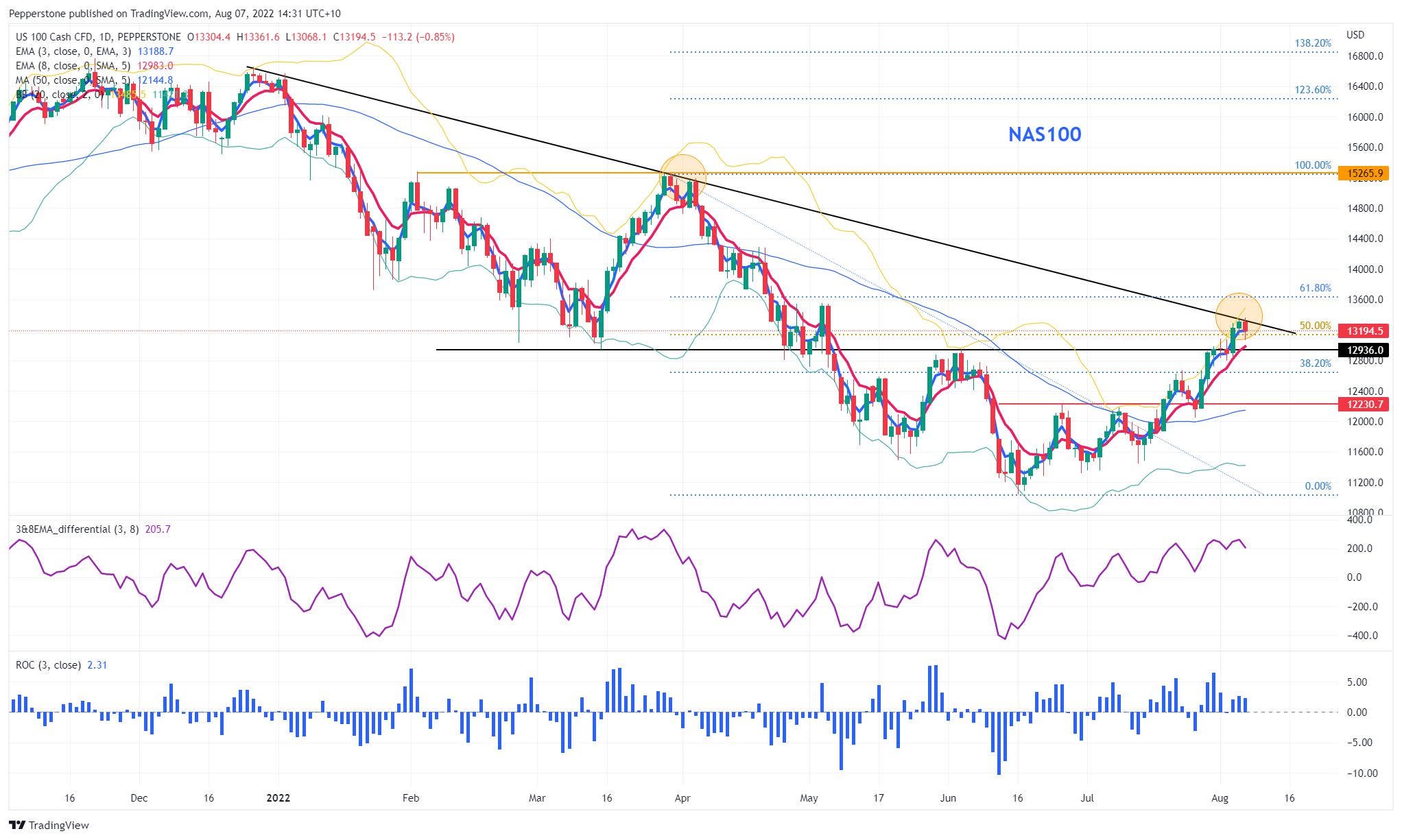