Homepage/Volatility event risk: Why traders need to have 21 July firmly on the radar/
Oil

Talk of an unfolding energy crisis in Europe is well known, but we now come to a more defining and almost binary point in the proceedings – one EUR, commodity and EU equity traders should be aware of as a major event risk.

On 21 July, the Russians will need to make the call to resume the flow of natural gas (NG) through the Nord Stream 1 pipeline – the pipeline, which supplies c.10% of Europe’s consumption was closed this week for maintenance and is due to re-open on 21 July – or at least that is the plan.

Supply through the pipeline that transports NG from Russia to Germany has fallen some 60% since June, due to a mix of sanctions and because a key turbine used to pump the gas was removed and sent back to Canada for maintenance and has remained there due to global sanctions. The Europeans, notably, the Germans and Italians, are concerned the Russians may use the unavailability of the turbine as a pawn to halt the restarting of flow on 21 July.

Various news wires have suggested the Canadians, under some pressure from Germany, have agreed to export the turbine back to Germany, but Gazprom has suggested they’ve not yet seen any documents providing evidence the turbine will be allowed to return. Naturally, the concern is if Russia does not restart the flow, we could see European NG inventories fast depleted, and any hope they could build them through the July to September period, and ahead of the winter, reduced. Talk of gas rationing is certainly elevated and it could significantly impact EU inflation and lower growth. It would make the job of the ECB, which is largely expected to hike rates by 25bp on 21 September, far more challenging.

The Europeans would look to the LNG market as an alternative, but that market is already very tight, with sizeable demand out of Asia.

Current inventory levels are manageable and can supply European demands through the winter period, but much now relies on the future flow from Russia. Russia seemingly holds the cards and will be acutely aware that if they don’t restart the flow then EU NG prices could push from current levels of E180 per MWh and above E200 MWh. In a world where most commodities are trending lower, EU NG prices are appreciating rapidly and with falling growth and consumer sentiment, this is a toxic mix for Europe.

While we can look at relative excepted interest rate settings, terms of trade or other traditional metrics that showcase the relative attractiveness as an investment destination – the simple fact is that EURUSD and EU NG prices are incredibly negative correlated and seem to have the strongest statistical relationship. The 21-day rolling correlation between the two variables is -0.88. 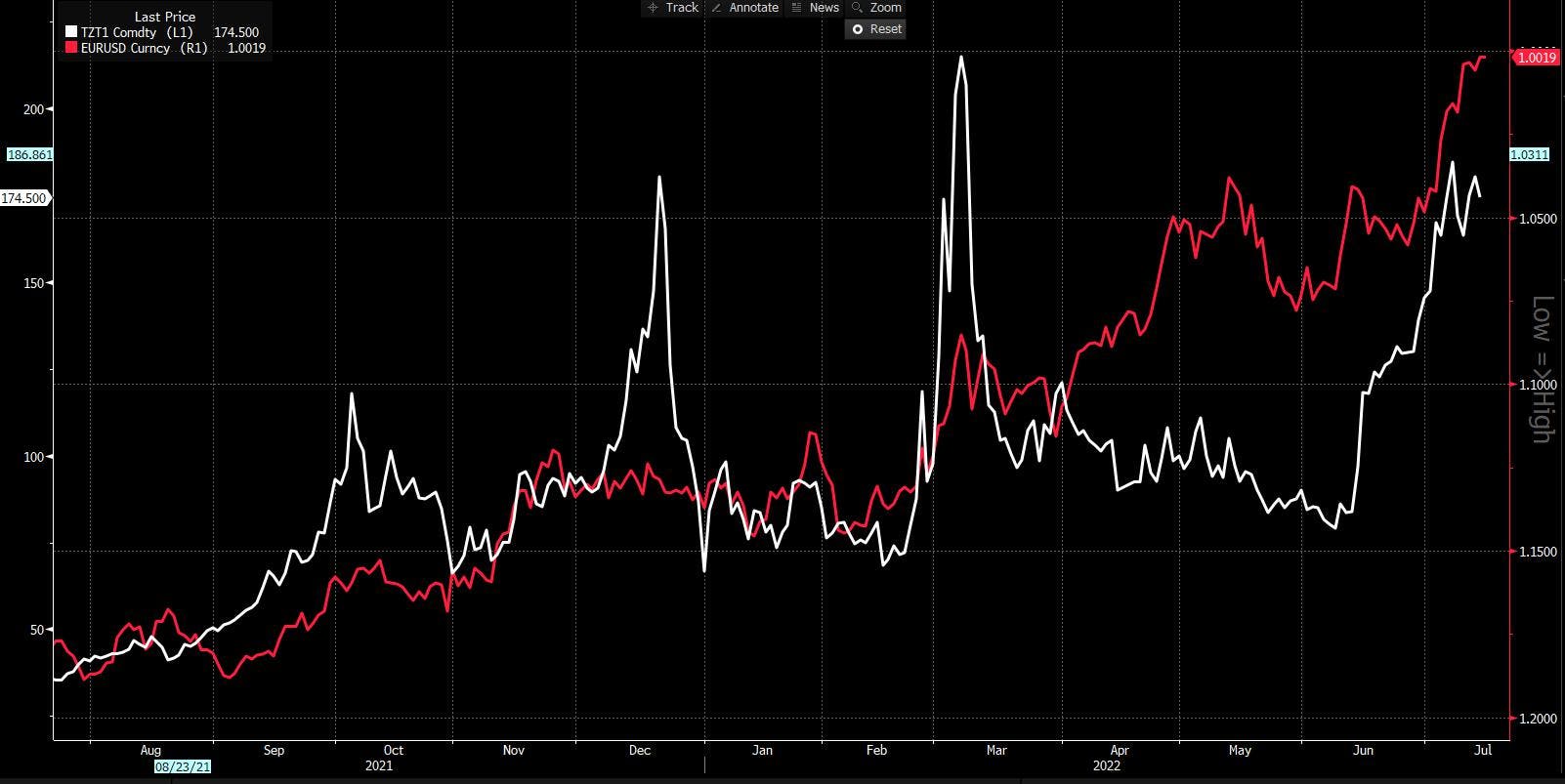 Taking that into account, it almost seems binary that EURUSD will move in anticipation of the outcome of Russia’s decision on 21 July. We can argue that EURUSD is already pricing in a large degree that Nord Stream 1 won't restart immediately, so that needs to be considered. 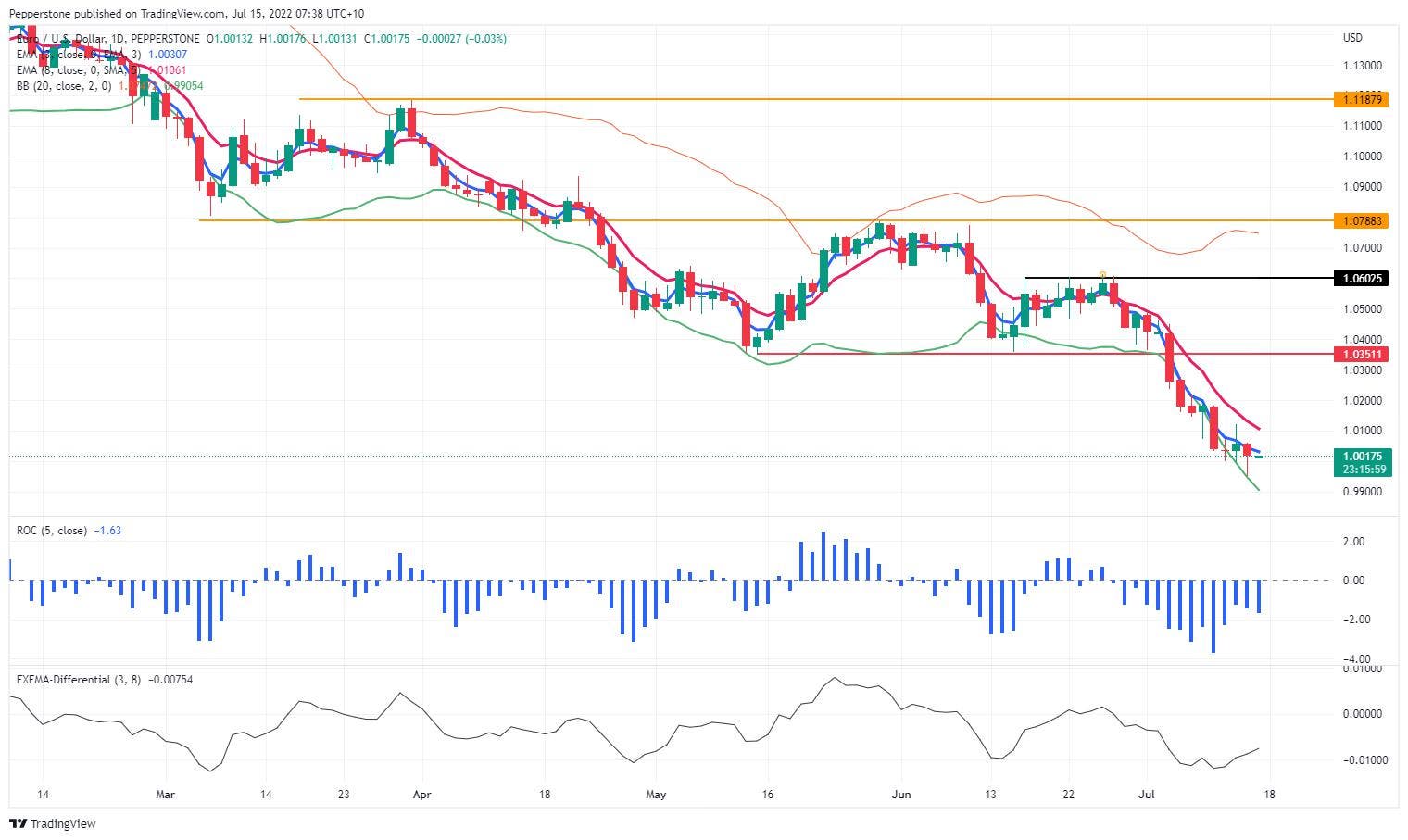 Of course, in the near-term, the pair will move on other factors but it’s time to put the 21 July and Russia's call on flow on the radar, because FX traders will be watching closely and reacting to headlines – any view that the flow will resume, even at a lower rate than before the recent halt, could lead to relief that Germany (and other nations) may not have to ration gas through the winter period, in turn, driving a market short of EURUSD into 1.0150/1.0200 and pushing the GER40 higher. Of course, if they hold off then it could set a new leg lower in EU assets.

An event risk to put on the radar.

US CPI preview - a major volatility event risk in the making