What is the relationship between Gold and Forex markets?

The Gold Standard and global currencies

There has always been a link between gold and forex. Up until the middle of the 20th century, a country's currency value was directly linked to gold. This was known as the Gold Standard.

Each country that used the Gold Standard would have a fixed price for buying and selling gold. This price was used to determine the value of that country’s paper currency.

The system had some notable flaws, and it was disbanded between 1931 and 1973.

Similarities between Gold and Forex

Gold is regarded as a currency. Its price fluctuates freely and can be exchanged for fiat currencies around the globe such as the US Dollar or the Great British Pound. Although physical gold can be purchased and stored, it is not commonly used as a method of payment.

The gold spot and futures markets are highly liquid. This means that they have many participants making it relatively easy to buy and sell large amounts without disrupting the market flow.

Like currencies, the participants are Central Banks, adding or reducing their gold reserves, and speculators and traders looking to profit from price movements. 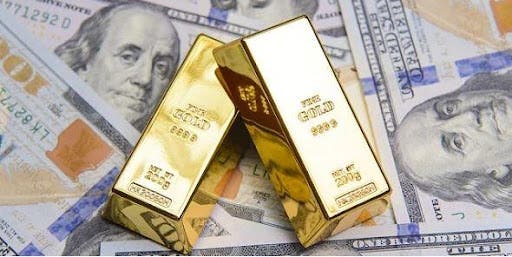 Traders who are concerned about political instability or uncertainty in the markets may look to store their value in gold.

Although there is no guarantee that the price of gold will not fluctuate, due to the fact there is a finite amount of gold globally, it will always hold a core value.

It should also be noted that a government or central bank may decide to devalue a currency to help with the country's exports or to shrink its trade deficit. Gold is traded freely and cannot be manipulated.

To find out the advantages of trading gold at Pepperstone, please click on this link.