Luke Suddards
Research Strategist
Share
Minutes from both the FOMC and the ECB set the agenda for this week, with the hawks claws fully out. Read below to find out more

The greenback has had a really strong week. Concerns geopolitically and soon to be Vice Fed Chair, Brainard unleashing her hawk were the catalyst for the moves pre-FOMC minutes. Her comments such as expecting balance sheet shrinkage to be considerably more rapid than previously with significantly larger caps and a shorter phase in period was enough for dollar bulls to press the buy button. She also emphasized the importance of getting inflation down. I think her comments took a lot of the sting out of the minutes. So what were the main takeaways from the minutes? 1) 50bps hike/s at future meetings are seen as appropriate by many participants 2) Monthly caps of $60bln for Treasury securities and $35bln for agency MBS have been "generally agreed" (with outright active sales of MBS also a possibility) 3) Caps could be phased in over a 3-month period 4) Fears over loss of public confidence in Fed’s ability to tackle inflation. Essentially, the Fed are going to have to move rates back to neutral rapidly to tame inflation. US yields have been on a rampage this week, with the 2s10s curve even re-steepening from inversion.

Data wise the only release of substantial value was this week’s initial jobless claims which beat expectations substantially (166k vs 200k exp and a revision lower from last month’s figure) and was the lowest since 1968. Next week Wednesday will see US inflation figures for March released with consensus expecting a headline figure of 8.3% YoY. 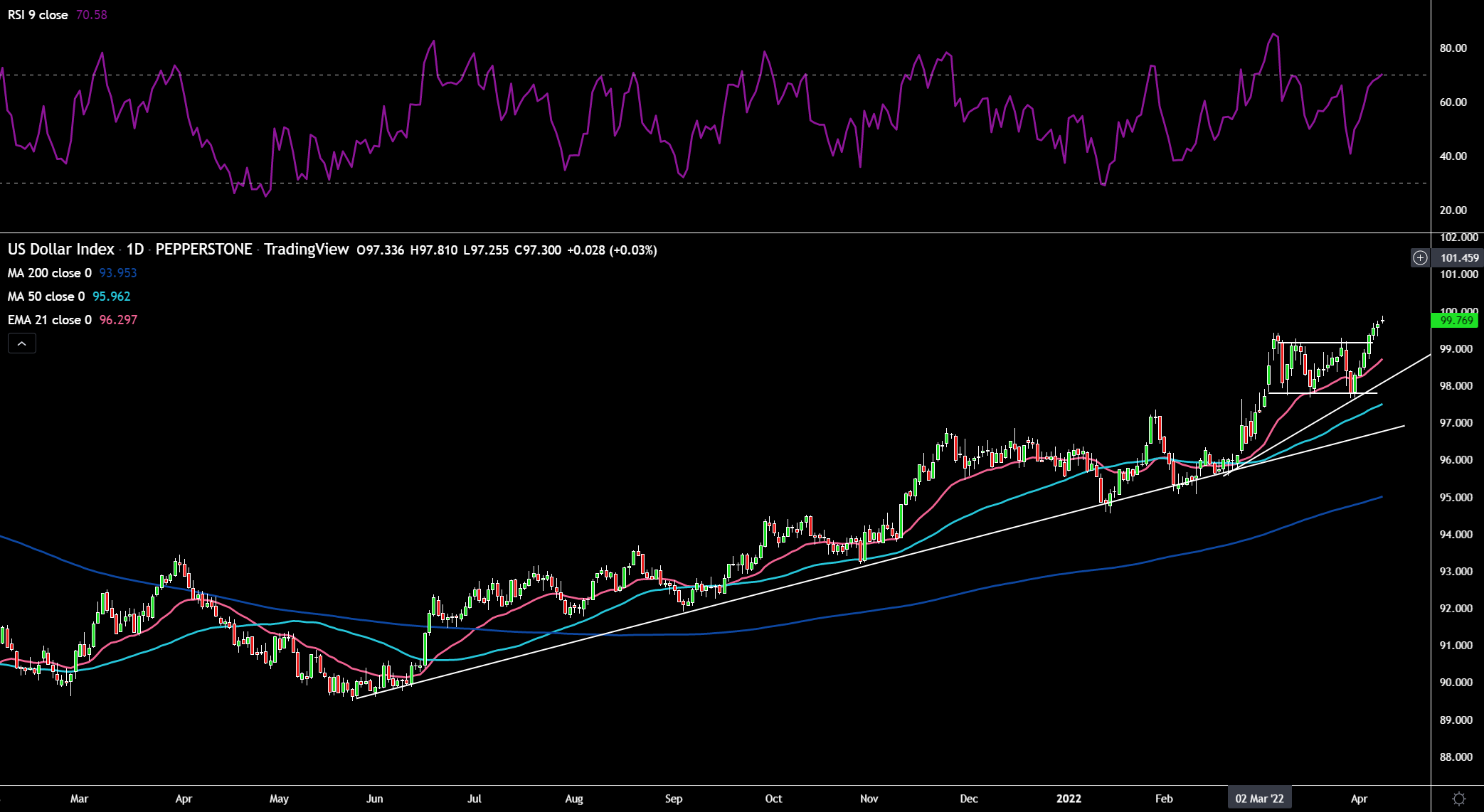 DXY is now above the range resistance and is finding some resistance at the key 100 psychological level. The RSI indicator is also on the borderline of overbought territory and there is some negative divergence when comparing peaks of previous highs indicating lower momentum on this push. Targets wise, on the upside a break of 100 would be key for bulls and then on the downside moves back to former range resistance.

The single currency has been struggling this week. Geopolitical headwinds are still dragging on euro sentiment, even though the coal sanctions which have been announced only affect circa 3% of their imports. The European Parliament did however vote for a broader scope of sanctions, but this will require sign off from the top brass within the EU and Germany. There is also another risk premium which could be spilling over into EURUSD and that is France’s upcoming election. Le Pen has been rallying in the polls and narrowing her gap with Macron. Some polls even show the 2nd round difference being within the margin of error. On Thursday, the first poll showed Le Pen winning the run-off. The pollsters Atlas, performed the best in the US 2020 Elections. It’ll get really interesting in the lead up to the 2nd round which takes place on the 24th of April. My Head of Research, Chris Weston wrote a great preview for this here. Sticking on the political front we saw the EU trigger the rule of law mechanism this week against Hungary after Victor Orban’s victory.

We also received minutes from the ECB as President Lagarde recovers from her Covid. There has definitely been a hawkish shift and the termination of APP in Q3 was a compromise it seems with some wanting it terminated in the summer. They also are fairly upbeat on the eurozone’s outlook despite the headwinds from the war. As a result it was argued by certain members that forward guidance conditions for lifting rates had been met or were close to being met. Some banks are even seeing a potential risk of the ECB taking rates straight to positive territory via a 50bps hike. Next week’s meeting should be fairly static on the policy action front given the lack of enough data and uncertainty caused by the French Election. 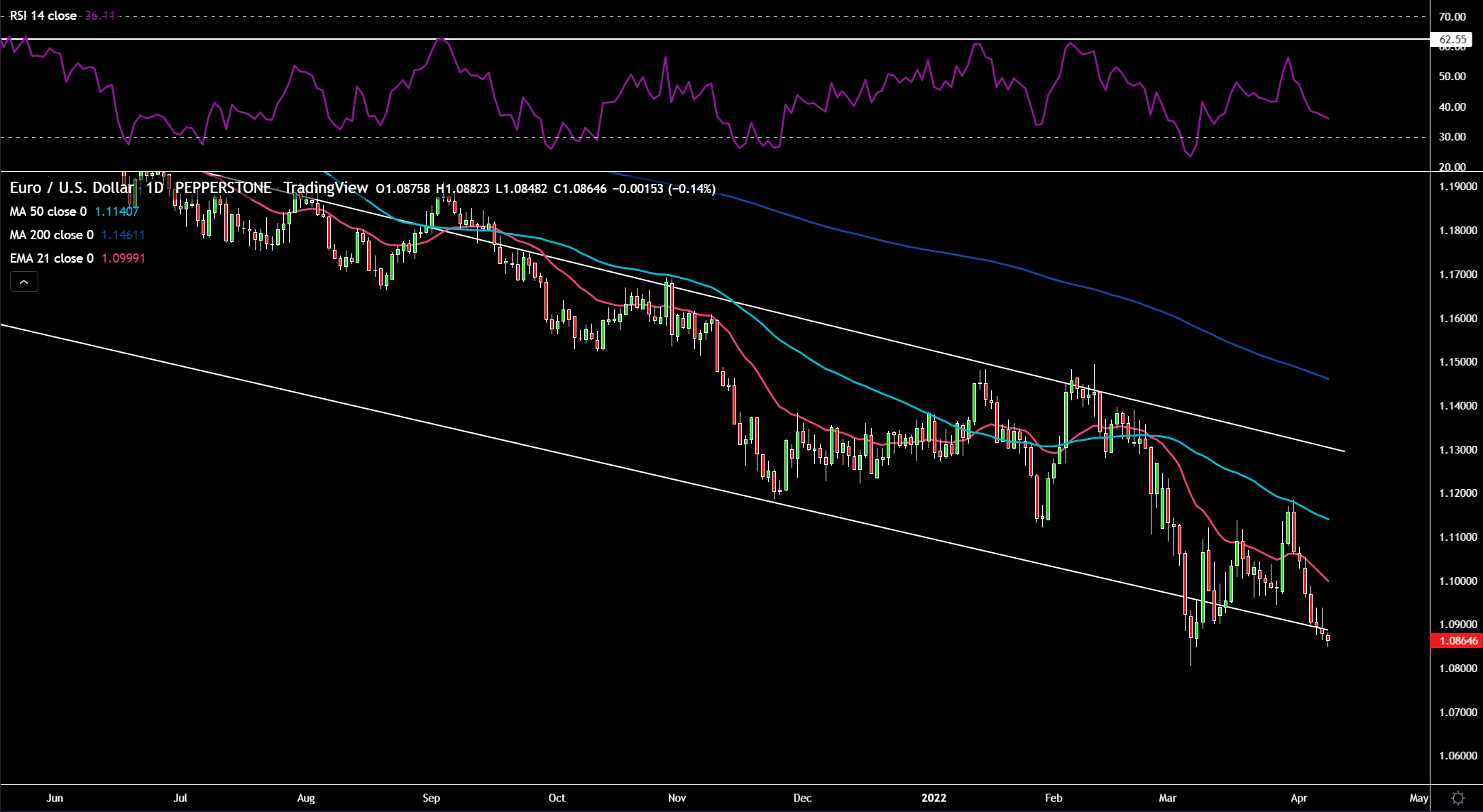 EURUSD continues to trend lower, taking out its lower trend line of the descending channel and eyeing the former lower of 1.08. The RSI is showing negative divergence similarly to the dollar above, indicating selling momentum is weaker on this push lower. Could we see a double bottom here form? 1.09 may now become resistance on the upside.

It’s been a barren week for UK specific news flow. Tuesday’s final PMI numbers actually came in slightly higher than expected, however, I’d far more interested in April’s numbers to see if the UK economy continues to weather the storm from Ukraine. GBP continues to trade fairly in line with the ebbs and flows of the euro as well as broad risk sentiment, crudely measured by US equity markets. The BoE’s Chief Economist Huw Pill offered nothing of concern for FX traders, rather pondering on the efficacy of monetary policy tools. Next week makes up for this week’s dull economic calendar, we’ve got UK employment, GDP and inflation data set to drop. 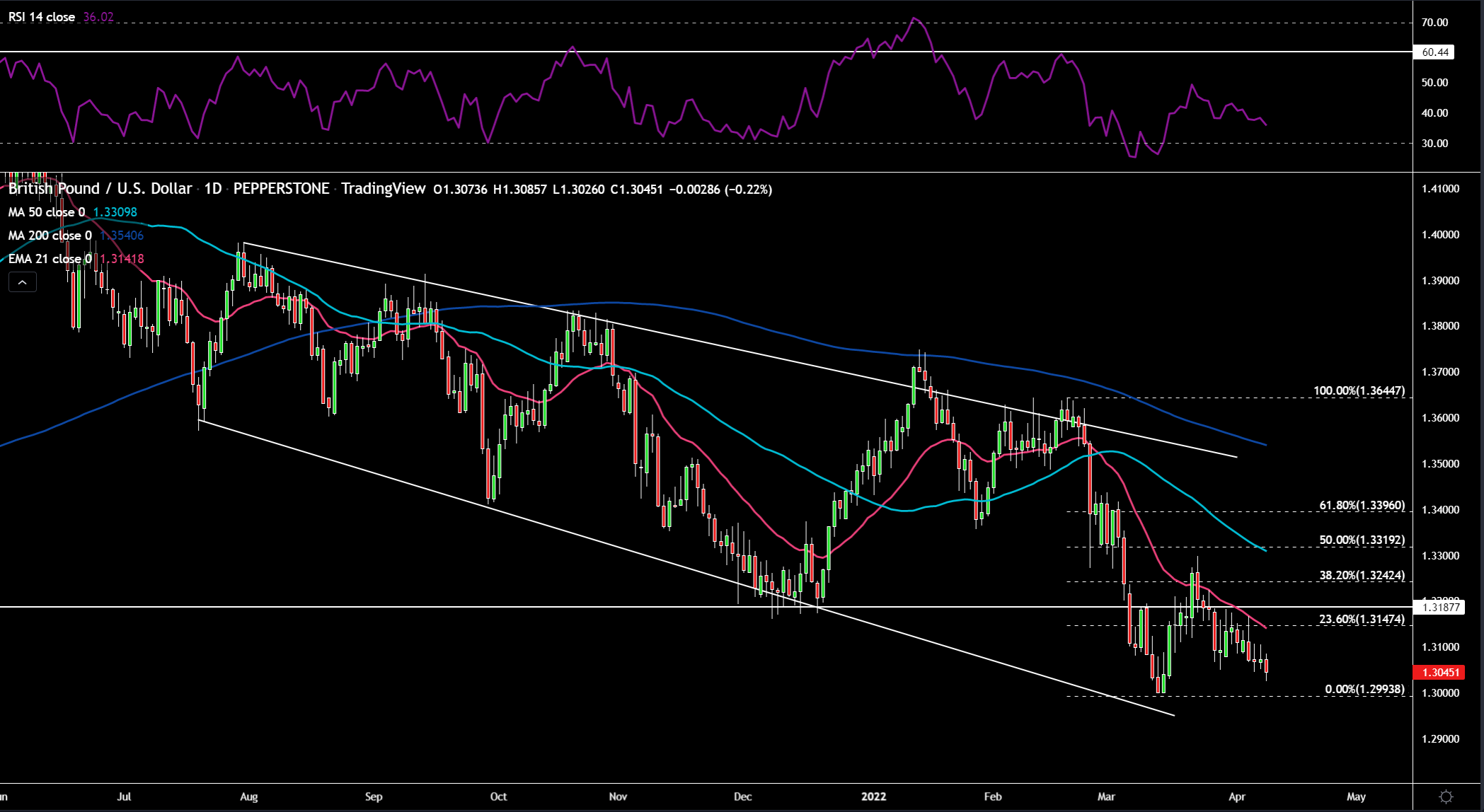 GBPUSD looks to be moving towards the key 1.30 level swing low. The 23.6% Fibonacci level and the 21-day EMA was too much for the bulls to overcome. 1.30 is definitely the level to watch on the downside and 1.31/1.32 on the upside. A positive sign for bulls may be the negative divergence appearing on the RSI indicator.

The yen continues to bleed against the dollar despite comments from BOJ Governor Kuroda that recent moves in the currency have been somewhat rapid and bears observing closely. He did back up his commitment to maintaining the yield curve target with unlimited buying of bonds if necessary. The jawboning is in full swing as Japanese Finance Minister Suzuki informed markets that they are closely monitoring the FX swings impacts on Japan's broader economy and will be particularly attentive to any sharp moves. The yen’s further weakness is quite a simple explanation – US 10-year yields have been rising rapaciously and USDJPY has a close correlation. 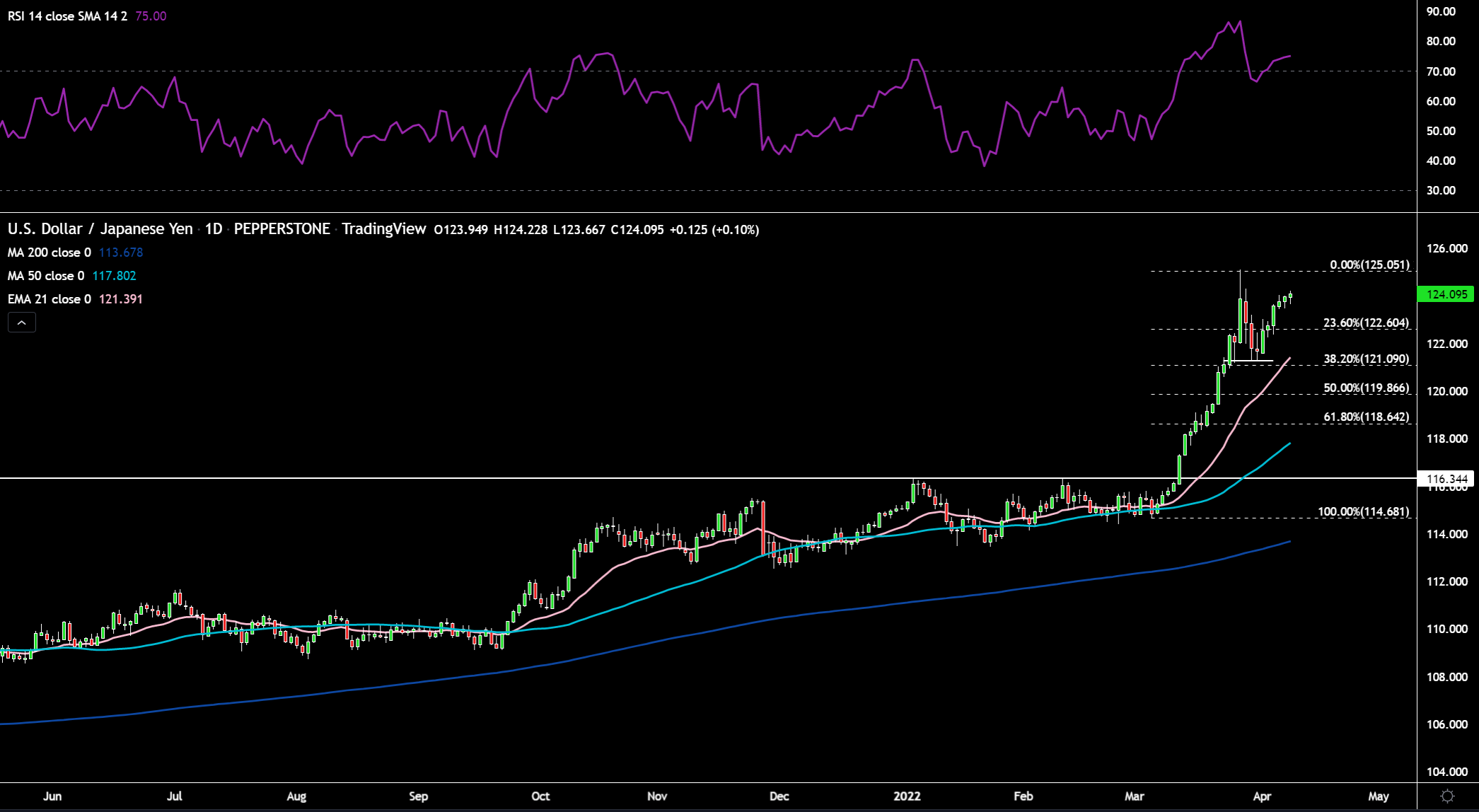 The 38.2% Fibonacci level provided the support and springboard for USDJPY to move higher towards 125 and the former spike high. Again the RSI does not have as much momentum behind this move as it did previously. On the downside 122.5 may act as a minor support level on pullbacks.

Gold price action remains moribund and stuck glued within a tight range of $1915 and $1940. The yellow metal’s resilience in the face of around a 20bps rise in real yields has now led to a significant dislocation to where it should be trading relative to its fair value based off Us 10-year real yields – an over $300/oz premium. I do wonder how much longer this disconnect can last before we revert back to more normal levels of premium/discount. Clearly, there are other factors influencing gold’s price such as safe haven during geopolitical nervousness, policy mistake hedge as the Fed tightens the screws (the minutes from Wednesday night show appetite and consensus for this) and a stagflationary hedge. Despite real yields up around 10bps on Thursday and a stronger dollar, gold was up 0.5% in USD terms. Weakness in equity markets was likely the reason for the resilience. 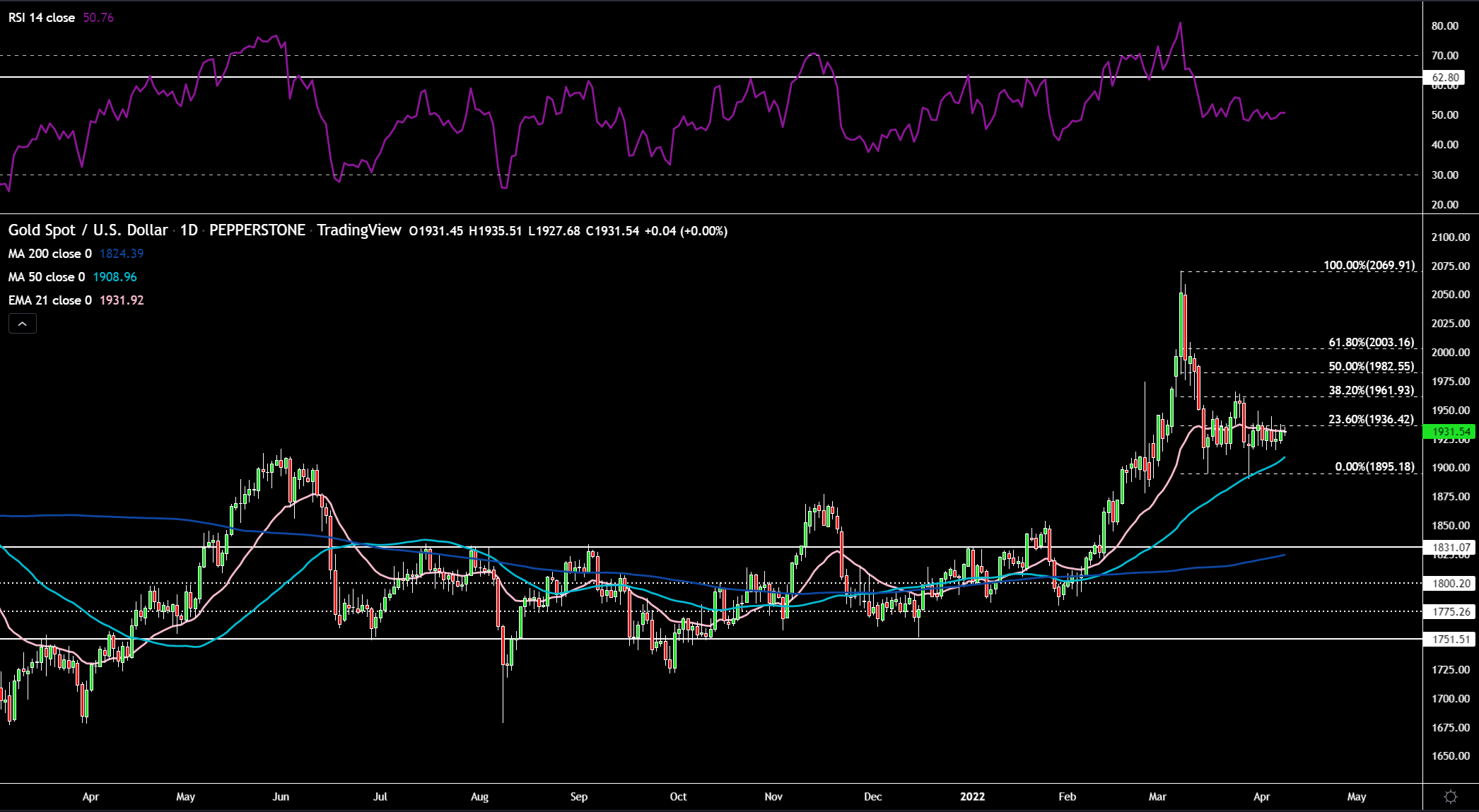 Gold can’t seem to break out of this new range between $1915 and $1940. The 21-day EMA and the 23.6% Fibonacci level are putting up a tough fight for bulls. The rising 50-day SMA should provide price support. Maybe next week’s inflation figures will be the catalyst to break us out of the range. The RSI isn’t providing any additional info at these levels.

Crude began the week positively rallying into the 21-day EMA as the Saudi Arabians increased the price of their crude as well as fears over energy related sanctions. Oil sanctions seem to have dodged a bullet for now as coal was rather targeted. A stronger dollar and fears over recession demand destruction from a hawkish Brainard married with technical resistance. Pre-FOMC minutes oil was under pressure as Chinese demand was in question again after the very weak PMI numbers dropped. We also saw a substantial build in US inventory levels in spite of the expectation of sizeable drawdowns. Post-FOMC minutes oil sold off quite significantly towards its 50-day SMA. Thursday saw that trend continue with a breach of said 50-day SMA and $100 beckoning ever closer, this is likely down to the IEA’s announcement of a 120mln barrels of oil release. 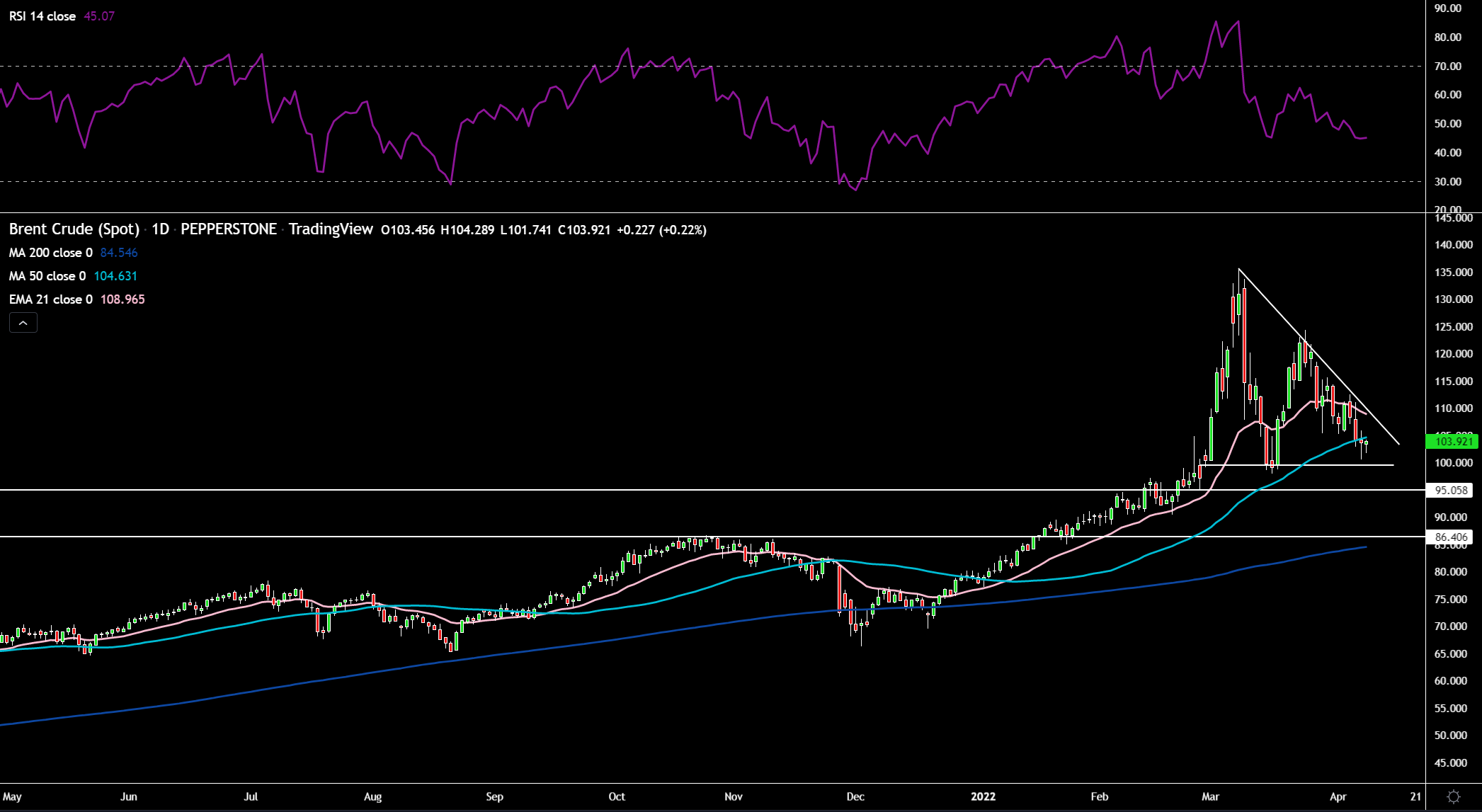 Spot brent slid below its 50-day SMA. I think a break below $100 could see a different playbook applied to trading crude – shorting rallies? There is a crude flat sided descending triangle pattern which has formed with the floor at $100. The RSI is in no man’s land for now. Targets wise, on the downside $100 and $105 on the upside around the 50-day SMA will be important.