Share
With traders running the ruler under 2019, I thought I’d take a moment to put some perspective on the moves we have seen in 2019 and a brief look ahead at what is expected in 2020.

It’s been a mad year in the markets, and I turn to this multi-asset market performance chart, where I think that if you’d said we’d have seen these moves at the start of the year, then I’d have questioned the logic and perhaps suggested having a lie-down and a glass of water.

However, it’s been a year of ‘buy everything’, driven by a synchronised effort to bring interest rates to the lower bounds, far better global liquidity dynamics, and a better feel towards US-China relations. Strong forward guidance to allow economics to run hot without any worry of hiking and, of course, massive corporate buybacks have also helped. 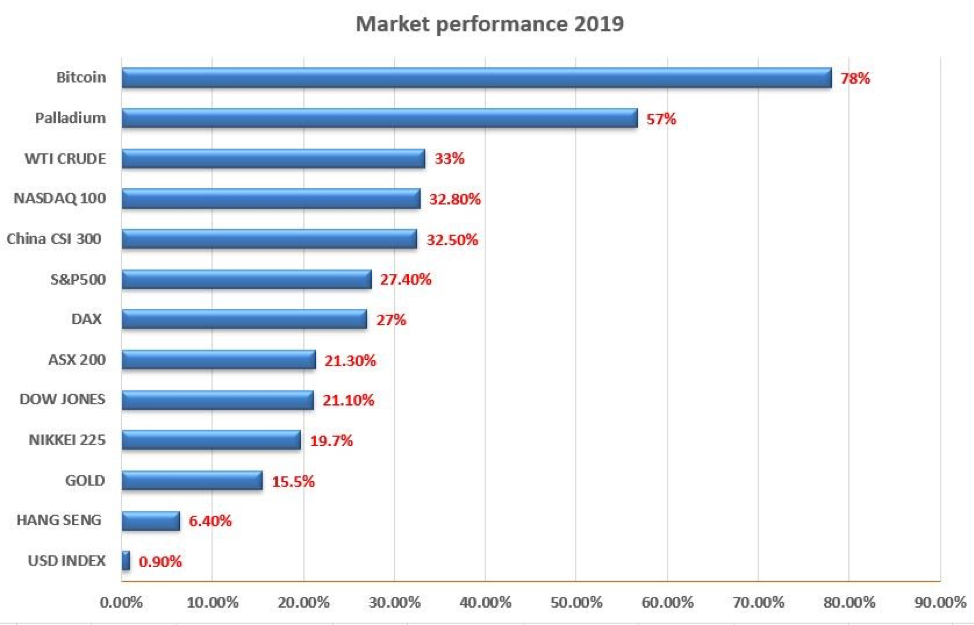 The issue many have is that central banks must have stolen performance from the future and brought it to the present. If we consider investment managers need to make a call on expected returns when making informed decisions on asset allocation, and expected returns are generally quite sanguine, then surely we must be in for a dull year ahead…well, at least we shouldn’t see a rising tide lift all ships, and it should be a year where stock pickers and active managers could have their time in the sun. I guess we say that at the start of every year though.

In FX markets, it’s been the year of the pound, although, it's been a torrid ride and if you’ve been in the pound this year and made money you’ve probably come out the other side with a few more grey hairs - yet far wiser in the art of trading a political currency. The MXN and CAD have fared well against the greenback, with the SEK the ugly kid of G10. That may change though with the Riksbank due to hike next week and to signal rates will be left around zero for an extended period.

If I look ahead into 2020, the irony of the situation is that economics is widely expected to improve with global growth expected to tick up to 3.4%, yet expected returns in asset markets are far lower – we need worries, it seems, to drive risk assets higher. Consider that as we hurtle into 2020 many of the grey clouds which concerned markets in 2019 are dissipating one-by-one, with trade looking somewhat better, with all the talk about tariffs being removed and not heading up. The UK election result ensures smooth passage of Johnson’s Brexit bill, and while there are red flags as to whether that will be good or bad for the UK economy longer-term, the large majority offers a belief the Transition Period will be extended and a smooth path through negotiations will be in play. I can go on.

I can go through the multitude of additional risks for 2020, but if I focus on 1-year implied volatility in major currencies, we can pinpoint which currencies the market sees as having the greatest future risk and extended moves in price. Clearly the ZAR stand out here, with the market expecting USDZAR to move (up or down) by some 14.8%. EUR vols should rise, but I’ve been saying that for a while and it’s more a hope call than anything.

So, a pick-up in FX volatility would certainly be welcomed, and as we close out the year I see both the JP Morgan global and G7 FX volatility indices at the lowest levels since 2014. USDCNH is absolutely key here, and there is no doubt as part of last week’s trade deal, the People's Bank of China (PBOC) would have agreed to keep the yuan stable and this seems key in keeping broad FX volatility suppressed. USDCNH vols will be key in 2020.

So, what’s expected. In the below table I’ve looked at sell-side forecasts for 2020, as well as a review of the median calls for 2019. Clearly, the two calls that the banks got most wrong were forecasts on gold and the US 10-year Treasury, but they’ve been fairly on point on the S&P500, USDCAD and USDCHF.

We head into 2020 with the consensus again calling for modest USD weakness, with GBP another likely strong contender. Equity strategists again call for upside.

Forecasts are generally not worth considering for traders. It just creates a bias, where many struggle to break away from; it affects our thought process, and as we can see, the consensus is usually wrong. What I like is the logic behind the call and how they get there, and it's always interesting to see when a view becomes too well worn and that is often the time to think contrarian.

Take the EURUSD call, we can see the divergence of opinions here with the high (green) to low (red) call, and median (white). This is what makes a market I guess, we shall see.

In terms of rates markets, well, we’re far more neutral on expectations of future central bank action, largely as central banks have told us they are done cutting and the previous cuts still have to work their way through the system. If you look at the far-right column you can see the number of basis points priced for the coming 12 months. In Australia, for example, we see 29bp of cuts or just over one cut priced. Of course, that could change if economics and inflation expectations deteriorate, but we head into 2020 with a far more flexible mindset.

I won’t go into strategy and the individual risks one-by-one but thought I’d flag what is expected from various markets. A certain calm descends if we consider the consensus here, but this is probably why we should expect a rocky ride!