Chris Weston
Head of Research
Share
The lead for Asian equities comes from a 0.2% gain in the EU Stoxx index. And with the S&P 500 cash market closed for US Labor Day, the best way to visualise the Asia open is to assess the net change in the S&P 500 futures. Here, we see S&P 500 futures 0.2% lower from 16:10 AEST (the official close of the ASX 200), with Aussie SPI futures closing 15 points lower in this same period.

This suggests a tight open in what’s due to be an action-packed economic data day, amid our calls for a weaker open in Hong Kong and Japan.

The focus in equity world remains on the setup in S&P 500 futures, where we see the market stuck between the 50-day SMA (2945) and the 200-day SMA (2814). This is confining the cash index into 2945 to 2822. A break of these levels should define the ensuing trend, not just the US markets. It could also have a bearing on risk in FX markets and commodities, with the VIX index so influential on broad portfolio management.

Our biggest flow has been in gold. There seems to be a view that the yellow metal takes out the 1550 supply zone soon enough. Friday’s low of 1517 needs to hold; otherwise, we pull back quickly into trend support at 1502. As a catalyst, at 00:00 AEST tonight we get the US ISM manufacturing report, with the consensus calling for an unchanged read at 51.2. We watch for the subcomponents, such as new orders and new export orders. But with this tier-one data point correlated to bond yields, this is a clear event risk for traders.

With a 19% chance of a 50bp cut priced into the Fed funds futures for the September FOMC meeting, and the speculative community running a record net long position of 2,127,352 contracts (see histogram below), if the manufacturing report comes in above, say, 51.5, with improvements in the forward-looking components, then a number of the rates bulls will do a quick assessment.

That could keep the bullish momentum in the USD rolling on despite sentiment among institutional traders already sky-high. This could also cause a reasonable sell-off in front-end bonds, with bear flattening the curve and gold sellers in the mix. Of course we could see a weaker ISM manufacturing print (than consensus), and the reverse kicks in, although the trend in the regional prints suggests upside risks to ISM print, with better numbers seen in Chicago, Dallas and New York while Kansas City was poor.

UK election risks are ever rising 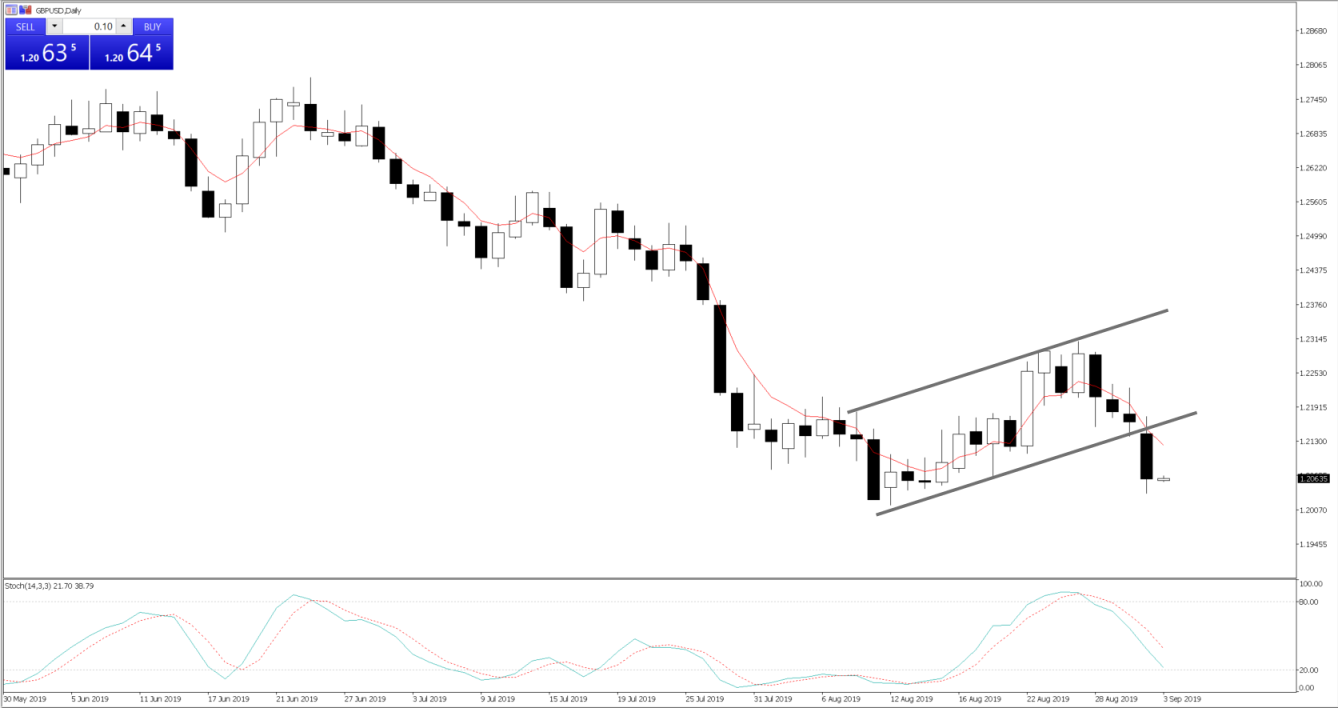 It won’t surprise that implied vols have picked up in all the GBP crosses, with GBPUSD one-month implied vol now at 11.78% — the highest levels since April. We look at GBPUSD two-month options and the skew of put volatility over call volatility at -1.64, but that’s only the 40th percentile. It feels like GBP bears still have work to do here. Most will look at the weekly Commitment of Traders (CoT) report and see the near record 89,028 short GBP futures position. However, the skew in demand for bearish downside structures (puts) versus bullish (calls) tells me a lot about semantics, too. Right now the options market is paying up for downside, but it’s by no means extremes.

Let’s see how that goes, but the wheels are in motion as Parliament resumes in earnest today, where a cross-party group are looking to pass legislation that’d require British Prime Minister Boris Johnson to extend Article 50 until 31 January. If this passes, which is going to be hit-and-miss recalling the Copper Bill that facilitated the March Brexit extension that only passed by a single vote, then Johnson has vowed to call a snap election for 14 October. There’s no certainty he’ll even get the blessing here to hold an election, as he needs two-thirds of Members of Parliament to agree, and that’ll require Labour to be on board.

Trading GBP is for the brave

Trading UK assets is clearly for the brave, as we’re fighting headlines and that’s always a tough ask. The market is obviously discounting a lot already and a decent element of no-deal Brexit risk even if it’s impossible to model.

Eyes on CNH and AUD

Staying in FX land as we head through the session, we continue watching USDCNH with the bull trend continuing. A break of 7.20 is looking like a matter of time. The CNY fix has been a source of volatility suppression and inspiration for a couple of weeks now, with the People’s Bank of China lifting the USDCNY midpoint by far less than the streets models time after time, and risk assets have taken heart in that. As long as the PBoC doesn’t bring the fix into the mix, then vols don’t spike. We’ll also be focused on all thing Aussie today. While we’ve kept a beady eye on moves in USDCNH, it’s the domestic side of the external/domestic debate that’ll see AUDUSD test key support into 67c or move back into the middle of the 68c – 67c trading range it’s held since 1 August.

Overnight AUDUSD implied volatility sits at 12.6%, but that should move higher as the session grinds on, as this vol reading is only 47th percentile (over the past 12 months), so it isn’t overly high. The market is pricing a 38-pips move (with a 68.2% degree of confidence) on the session, and that accounts for a whole plethora of event risk. First up, net exports are expected to contribute 30bp to tomorrow’s Q2 GDP. And after yesterday’s inventory data, one’d be highly surprised if the consensus of 0.5% QoQ isn't closer to 0.2% to 0.3%.

The implied move also accounts for July retail sales (also 11:30 AEST), with calls for a 20bp increase here. We watch for the Q2 balance of payments print, where the consensus is we see a surplus of AUD $1.5bn, which not only will be used as a political accolade. But for those who model a currencies long-term valuation, current accounts do matter.

The Reserve Bank of Australia meeting (14:30 AEST) is the central focus, though, even if the market places a 12% chance of a cut. The bigger driver of the AUD will likely be the statement and whether it’s dovish enough to meet the 54bp of cuts priced in over the coming six months or 62bp of cuts over the coming 12 months.