Luke Suddards
Research Strategist
Share
Will the Bank of England follow in the hawkish footsteps of the Fed? Read below to find out more

Thursday’s Bank of England meeting is expected to be largely uneventful, but as we saw last week with the Fed, these meetings now certainly have a hawkish surprise bias embedded. Will stronger than forecast inflation and above the target of 2% cause a shift in tone similar to the Fed last week? Like the rest of the market I don’t expect any policy changes, but will keep my eyes peeled on the rhetoric used. It’s also the Chief Economist Andy Haldane’s last meeting who was the lone dissenter at May’s meeting. The risk for this meeting is if he brings any of the others on board to this view and we see something like 2 more dissents. That in my opinion would be interpreted as hawkish and hence bullish for sterling crosses. Although unlikely we already saw one of the most dovish BoE members, Gertjan Vlieghe, stating a rate hike could be on the cards in late 2022 if baseline forecasts are met. Vlieghe is also leaving at the end of August, shifting the weight of policy decisions onto the core players of the BoE namely - Ramsden, Broadbent and Cunliffe.

Recent economic data has been moving in the right direction, despite the delay to the reopening caused by the more infectious Delta variant – as a result the BoE should express cautious optimism in their outlook. In terms of price pressures, the bank might raise the spectre of upside risks to their current forecasts, but buttress this with the transitory narrative. Market expectations of medium-term inflation expectations viewed through the prism of 5Y5Y swaps have not spiralled out of control either, indicating fears of runaway inflation are not present at the moment. Although unemployment estimates were revised lower, a lot of uncertainty remains around the effects of the furlough scheme cliff happening at the end of September. It is for this reason that more decisive hawkish steps should remain off the cards at this meeting. I’d be surprised if we saw a change in the messaging around guidance. The current guidance sees the MPC standing pat until there is clear evidence that significant progress has been made towards closing the output gap and achieving 2% inflation sustainably. Assessing whether these conditions have been met while the distortionary effects of the furlough scheme remain, make it difficult and point to more clarity being obtained around late 2021.

Cable could struggle a bit from here with the Fed now being categorized in the hawkish camp. The policy normalization fuse has now been lit. There is also a positioning washout which could take place as dollar shorts cover. 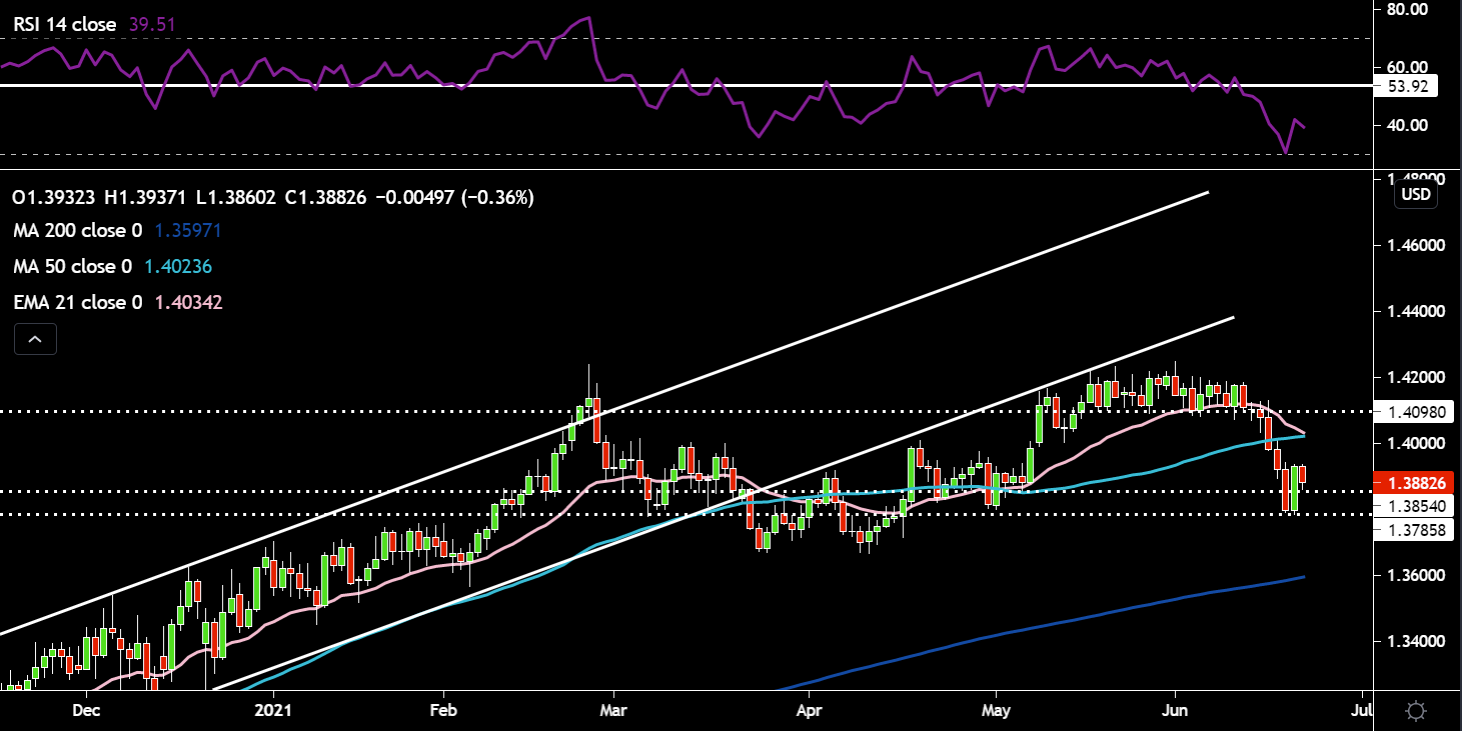 The chart clearly shows some technical damage as price sliced through the 50-day SMA pushing lower through some big levels. At a minimum price needs to regain that for the bulls to feel somewhat more confident. That level comes in around 1.402. The RSI has bounced off the oversold line as a bit of mean reversion kicks in. Support seems to be holding at 1.378 and price is now peaking its head above the 1.385 level. For a more aggressive move lower the March and April lows of 1.367 would come into play. On the upside, monitor 1.40ish (50-day SMA) and above that 1.41 (former range support).

Given the structurally weak inflation dynamics in Europe, the ECB will keep the foot on the accelerator and be one of the most dovish central banks on the block. Hence, BoE-ECB monetary policy divergence opens up more downside for EUR/GBP. One factor which could handbrake this move would be an escalation between the EU and UK over the issues in Northern Ireland, potentially reopening up Brexit wounds and sparking a mini-trade war. 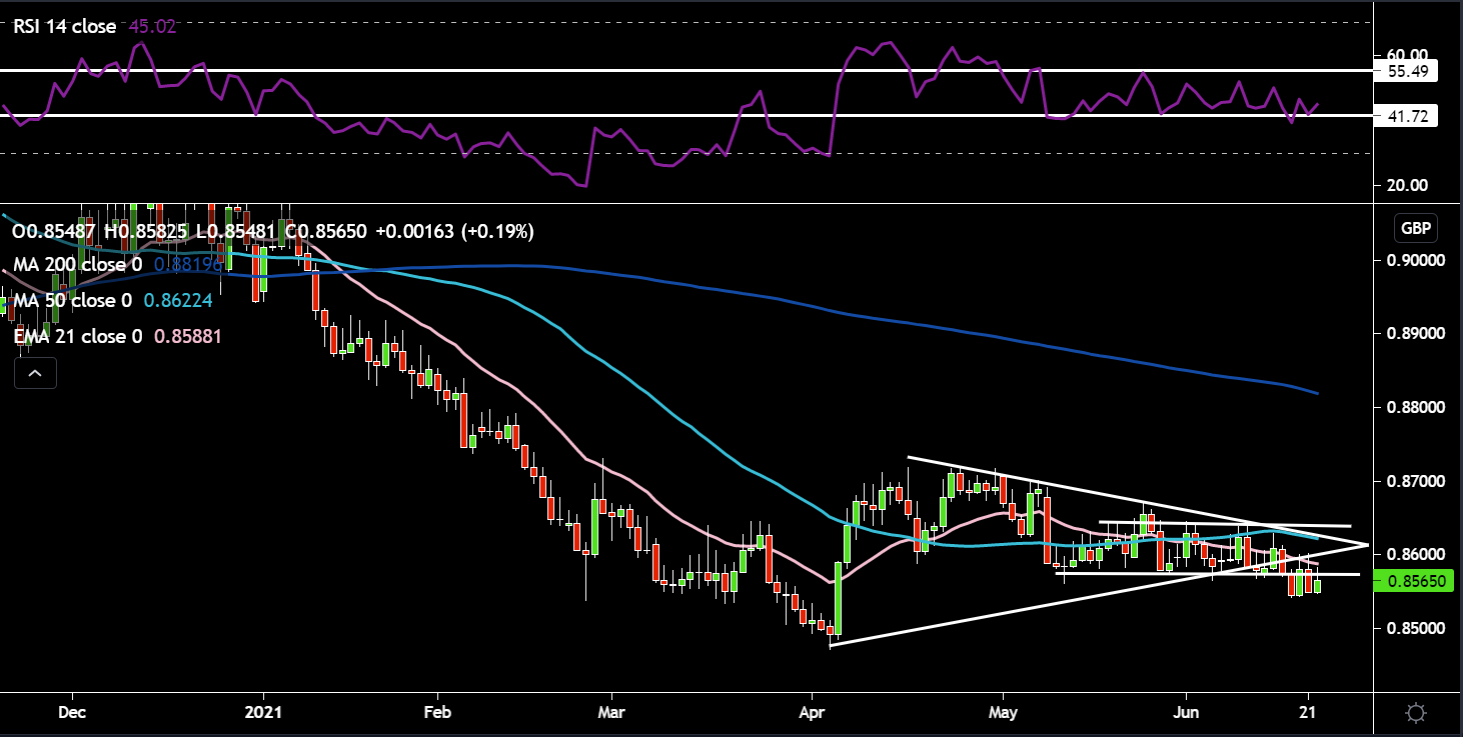 Price is hovering ever so slightly below the range support at 0.856 and is also below the lower trendline of the triangle pattern. Like price the RSI is also trapped in a tight range just above the 41.7 level, but making a series of lower highs. For now a short the rallies approach should work well for this cross. On further downside moves I’d monitor the 0.854 level and the 0.847 (April low). To the upside look at the 0.859-0.86 region as well as the 0.862/4 zone (50-day SMA and range resistance).