AUD suffers most in first week of 2020

The AUD gained late December on the back of gentle USD selloffs, soon to be pulled back from its gains amid the devastating Australian bushfire crisis. The greenback also started a comeback as global manufacturing data started to look up, despite last week’s ISM print: the lowest since 2009.

Then headlines reporting that Iran had fired rockets at a US-Iraqi air base, saw investors seek safe havens as tensions ramped up. This weighed on the Aussie dollar, which dropped to a three-week low of 0.6850 before bouncing back on better-than-expected Building Approvals (-3.7% vs -11.7% forecast).

Another downside risk is increased expectations of a rate cut at the RBA’s next policy meeting on 4 February. Implied probability of a 25 basis point cut sits currently at 63.8%. 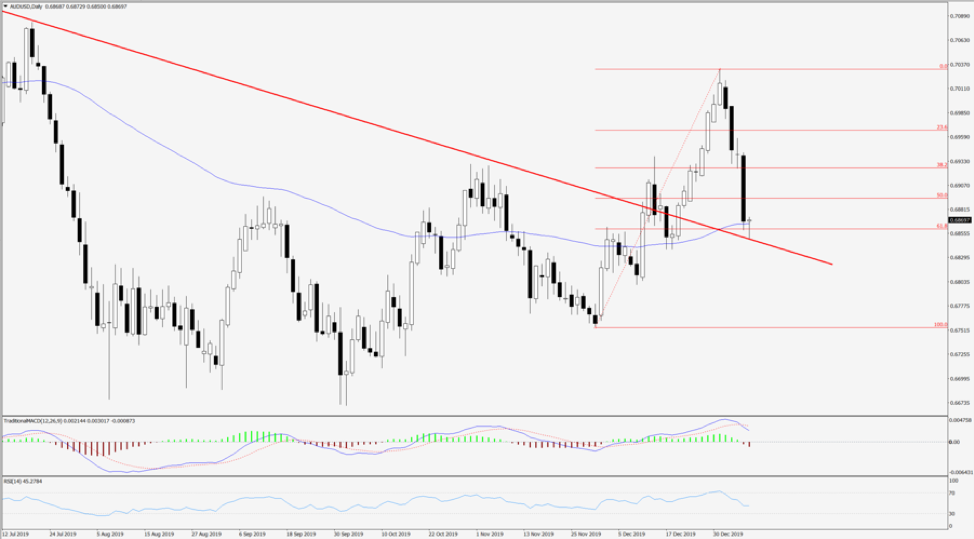 On the daily chart, AUDUSD is pulling back to the 100-day EMA, and testing the 61.8% Fib retracement level of the rally that started late November. A break below here should pave the way to testing 0.6848, the long-term downtrend since December 2018.

Keep an eye on the US-Iran tensions, as heightened conflict will weigh further on the AUD. Also watch for Australian Westpac Consumer Confidence due tomorrow.