Homepage/Some optimism for the eurozone as energy prices soften/
EURDAX

Some optimism for the eurozone as energy prices soften

Luke Suddards
Research Strategist
Share
Euro assets have stabilized as gas and electricity prices fall. This is creating more volatility for traders to exploit. Read below to find out more

The eurozone is receiving some temporary respite as news hit the wires of a potential intervention to stem the parabolic rise in electricity and gas prices. Additionally, the EU has reached the 80% gas storage level looks very likely (currently at 79%) to be met further adding to the optimism. This led to both benchmark gas and electricity prices in Germany falling by over 20%. The euro and DAX40 consequently saw a relief rally on the back of this. However, the optimism needs to be tempered. Nord Stream 1 is set to be turned off for 3 days from tomorrow and there are fears that it could remain offline for longer. Getting storage above 80% is important, but if gas flows are turned off during winter there is only so much buffer that will provide. French utility Engie SA received news that gas supplies would be immediately reduced due to a contract disagreement. French Energy Transition Minister Agnes Pannier-Runacher stated that they’re ready for the worst case scenario – a complete shut-off.

German inflation on a harmonized basis came in line with expectations of 8.8%. Tomorrow’s eurozone wide figure (exp 9%) will be important before next week Thursday’s ECB meeting. The market places a circa probability of 66% on a 75bps hike. The ECB’s Knot stated today that he is leaning towards a 75bps hike, but is open to discussion. He is one of the more hawkish members on the Governing Council. A hawkish ECB and softening in energy prices is combining to providing a mild tailwind to eurozone assets. However, general risk sentiment is reversing and this is leading to selling across the board. It could be due to the headline regarding Taiwan firing shots at a Chinese drone. Or the solid US consumer confidence and jobs openings data (showing a still tight labour market) which will keep the hawkish Fed narrative alive and well.

EURUSD is back above parity and eyeing the 21-day EMA and 1.0105 resistance level. EURGBP is providing traders with far more volatility and the 0.86 level is 22 pips away. However, the RSI is back at a very key resistance level, which has consistently marked the top for previous price rallies. 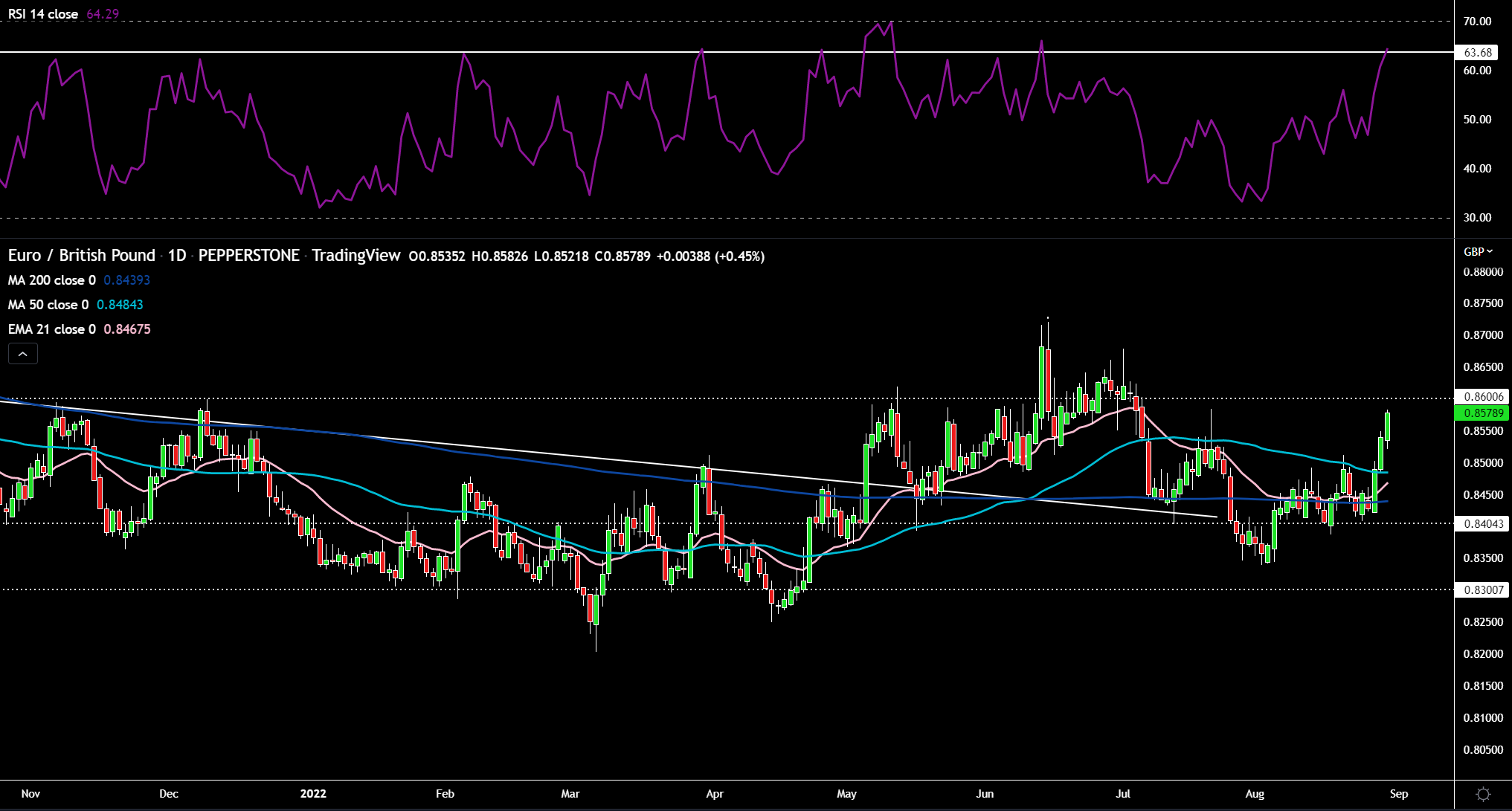 (Source: Tradingview EURGBP chart - Past performance is not indicative of future performance.)