Homepage/Trading in a post pandemic world: Markets and ‘the blame game’/
Coronavirus

Sean MacLean
Research Strategist
Share
Our world could be very different when we emerge from the COVID-19 pandemic - politically, socially, and economically - and traders will navigate markets with a new set of rules.

Countries are aching and geopolitical ties are cracking: the US has accused China for failing to prevent the virus spreading, meanwhile the European Union (EU) is gravely divided over a common fiscal response.

The politics has much more to play out, but so far it’s clear that geopolitical relationships will be fractured and a new wave of nationalism will encourage deglobalisation.

Here’s what traders will need to be aware of navigating markets in the post-pandemic world.

The US-China relationship is about to be the worst it’s ever been, so any hopes of mending the fragile trade relationship are fading. The USA is hurting with the world’s highest case and fatality counts, and President Trump is pointing the finger at Beijing for failing to prevent the virus spreading. He’s threatened tariffs (his favourite!) as well as punitive financial measures to the sum of several hundred billion dollars. Meanwhile Beijing has lashed back, accusing Washington of deflecting from its own poorly-timed virus response.

The US-China relationship has been fractured since Trump took office. Don’t forget they remain in a dragging trade war that caused global market uncertainty, dampened growth, and increased demand for safe havens. As the relationship sours again, the market effect could multiply.

USDCNH is our risk proxy here, not only because it will be an increasingly important read on global risk but also because it influences other risk assets like the AUD and NZD. USDCNH weakened to 7 CNH per 1 USD last year amid trade war escalation, dragging risk currencies like AUD and NZD lower on its course. The drastic CNH weakening led to the US Treasury declaring China a currency manipulator, a designation Trump had been trying to achieve since 2016. 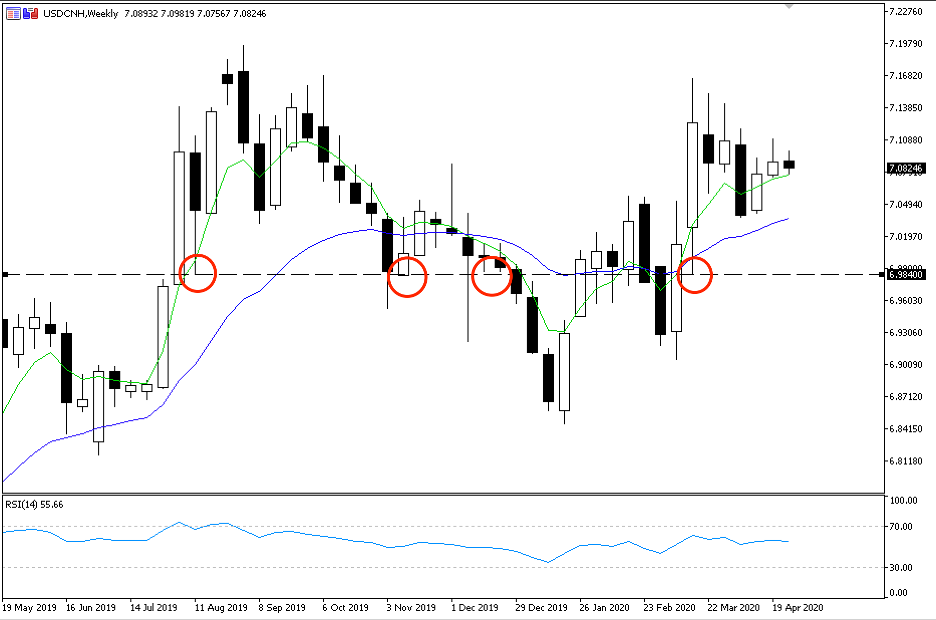 "Weekly chart: USDCNH pushed above the 7 handle last year and has mostly remained higher since. Multi-month support has formed at 6.9840, which should hold USDCNH above 7.0000. Chart source data: Metaquotes MT5"

Looking at the weekly chart over the last year, it appears USDCNH belongs comfortably above the 7 handle for now. There’s multi-month support at 6.9840 for any draw downs, a strong floor that should keep CNH weakness above 7 USD as Washington ramps up financial measures against Beijing. In fact, I wouldn’t be surprised to see fresh highs above 7.1649 in the medium-term as the relationship sours.

USDCNH is important for all traders because it influences moves in other risk assets. Take the Australian dollar (AUD) and New Zealand dollar (NZD) as examples. Not only are the antipodean currencies extremely sensitive to global risk appetite in general, but China is their biggest trading partner. So a weaker CNH typically means a weaker AUD and NZD - and this was particularly the case during trade war escalation in 2019.

Although USDCNH isn’t the most popular forex pair, many traders like to trade CNH moves through its close proxies the AUD and NZD. Start trading forex today.

The fate of US-China relations hangs in the ballot box this November at the US presidential election - and the pandemic has quickly become an election issue. Assumptive democratic nominee Joe Biden is less critical of China and more critical of Trump, who he has accused of downplaying the virus, shifting blame, and providing insufficient economic protection to American people during the downturn.

Biden’s campaign will undoubtedly focus on healthcare this year: a wave he could ride to the White House. But at the same time, nationlist sentiment will be brewing, and the devastation left by the pandemic will spur further deglobalization. That’s a strength Trump can play to, his anti-China rhetoric already laying the cards.

But can Biden win the election? And if so, what do markets look like under a Biden administration, post-pandemic?

Firstly, Biden would be an easier ticket for China. A Biden administration would likely do away with the strict tariffs imposed on China by the Trump administration, preferring an Obama-approach to foreign policy, although he has become increasingly vocal about China’s IP theft and WTO rule violations. Without worrying about the finer details, a softer approach to China is a move that would strengthen trade ties, in turn clearing up market uncertainties and boosting the Chinese yuan. Risk proxies would fly.

Beyond trade policy, Biden is business-friendly. His Delaware constituency has a strong presence from banks and credit card companies, and his campaign accepts funding from Wall Street. Although he has indicated he would reverse Trump’s ‘excessive’ corporate tax cuts, Biden is a fairly market-friendly ticket, and this should work for equity markets.

But when it comes to elections, markets like the status quo, especially when it’s working for them - and that has been Trump’s pro-business politics. Whatever it might take for Biden to get across the line, if markets start to believe he has a chance at turfing Trump, price will begin to adjust for a potential change. Although Trump is far more business friendly, Biden’s lighter stance on China might be a much needed confidence boost for equities and other risk assets in the post-pandemic world.

3. A divided European Union is bad news for the euro

A rift is forming in the European Union (EU) between southern nations ravaged by the pandemic and fiscally conservative northern nations unwilling to share the necessary debt burden. As cracks appear, French President Emmanual Macron has warned the EU faces collapse if joint action cannot be reached. This puts the future of the euro in jeopardy.

A particular sticking point has been calls for joint EU ‘coronabonds’, which would see all member states share a debt burden with crippling economies like Italy and Spain. So far, concessions permit a troubled nation to borrow up to 2% of its GDP through the EU stability mechanism for healthcare costs only, and not the resulting economic downturn. This way, countries that suffer the most will pay back the most. Italy in particular finds the measure unacceptable - Italian Prime Minister Giussepe Conte has warned of a domino-effect through connected EU economies if ravaged economies aren’t rescued with joint coronabonds.

The political backlash will playout later, but until then the rift will weigh on the common currency. Remember, the euro’s strength is found in its unity: policy coordination across the bloc, ensuring a stable market for the world to trade with. History has shown that if this rift runs deep, the EU will be fractured and risk a populist backlash. Macron’s warning that the EU ‘faces collapse’ over this is an unsettling outlook for the shared currency.

"Daily chart: EURUSD price action has calmed after volatility caused by the pandemic sell-off February to March. Price has broken the steep downtrend and is moving sideways. Price remains below the 200 MA and 50 EMA, and is trading in line with the 20-EMA. Chart source data: Metaquotes MT5"

EURUSD was fairly subdued in April after the volatile funding pressures eased late March. Although the euro continues to gradually weaken, price moved sideways through the steep downtrend from the March highs. The euro has been in a gruelling downtrend since January 2018, and the outlook remains titled to the downside. In the near-term though, we’ll need to see a close below multi-month support at 1.0778 for a signal of further euro weakness.

Of course, there’s far more day-to-day noise affecting the euro even if the outlook is tilted to the downside. The euro is a popular funding currency, receives its own safe haven flows, and the ECB has used only 13% of its Pandemic Emergency Purchasing Program (PEPP), which could support the euro in the short-term if used further.

ECB President Christine Lagarde has warned that euro area GDP could fall as much as 15% this year.

As we emerge from this crisis, the recovery will be staged with the easiest monetary policy the world’s ever seen. Near-zero rates across the world and a new wave of QE measures will support the recovery and act somewhat as a counterweight to the economic fallout from geopolitical tensions.

The magnitude of central bank policy can already be felt, and it’s why there is such a disconnect between markets and economics right now. Equities were quick to rally out of bear market lows, riding a wave of easy policy to eye-wateringly high levels despite the poor economic backdrop. The Fed has simply refused to let the US equity market sustain its losses. So far it’s working but considering the economic reality, a correction lower in the short-term wouldn’t surprise.

5. Gold as bullish as ever

Gold has no borders, so in an uncertain world, it’s the purest hedge against geopolitical risk. Just last year, the US-China trade war propelled gold to a six-year high. The precious metal has rallied more than $200 an ounce in US dollar terms (XAUUSD) this year alone. In the medium-term, gold bulls will be eyeing a new all-time high above the 2011 record at 1920 USD. Trade gold CFDs now.

It’s also the ultimate hedge in an easy policy world. Gold rallied after the GFC on the Fed’s first ever QE program and a near-zero Fed funds rate. This time, more countries are pursuing QE programs while the Fed upgrades to ‘QE unlimited’. The case for gold is as bullish as ever.

"Daily chart: Gold (XAUUSD) from August 2008 - September 2009. Gold initially sold off in 2008 until the Federal Reserve announced QE1, which saw a rally in gold that continued even after the GFC."