Homepage/Will the RBA do a policy pivot? For now, the AUD cant find a friend/
RBAAUD

Will the RBA do a policy pivot? For now, the AUD cant find a friend

Chris Weston
Head of Research
Share
One of the debates in FX circles is whether lockdowns, currently seen in Sydney and Melbourne, affect the RBA’s thinking on policy and see them reverse its recent decision to slow the pace of asset purchases (QE) from $5b to $4b, starting in early September.

After all, the Reserve Bank has told us they hold a flexible mindset to policy and will react to changes in the data flow – while the Aussie economy performed admirably through the re-opening stages, any economy seeing an economic shock like this could use all the support it could get.

And a shock we have seen - retail sales are in decline, hardly a surprise I guess when you can’t get out to spend, but consumer and business confidence will be affected. Case in point, Westpac is now expecting an economic contraction for the September quarter of 0.7%. Contrast that to the US where consensus growth expectations are for 7.2%.

It’s not all gloom though, we have a compelling case study that the Aussie economy should rebound strongly when the restrictions are removed. However, in the near term, we contrast to countries with higher vaccination rates and therefore far higher barriers to invoke lockdowns. Subsequently, it’s easy to justify the bearish trend in the AUD, notably vs the USD, where the pair is getting the additional tailwind from a bearish move in Chinese and HK equity markets.

We can look at the AUD against cross rates - which go some way to removing the ‘risk-on risk-off’ semantics expressed when trading the AUD vs the USD and JPY – and see bearish trends (on the longer-term timeframes) vs the GBP, NZD, and CAD.

We’ll need to see the actual extent of the fall-out in Aussie domestic economics, but the September RBA meeting (7 Sept) could be a must-watch event – consider the RBA will also have had a chance to digest what they hear from the July FOMC meeting (29 July) and Jackson Hole Symposium (26-28 August), events that should offer a clearer signal on Fed policy and a timeline for the Fed to start cutting the pace of its QE program. Will these events give the USD additional tailwinds?

The RBA has maintained a close monetary policy relationship with the Fed and both have been on the more dovish side of the G10 FX central bank ledger – ultimately this has kept relative implied interest rate settings (between Aussie and US rates) aligned and reduced the volatility in the exchange rate to an extent. Aussie 5-year government bond yields trade at a 7bp discount to US 5-year Treasuries, but there is no trend here and this is limiting the fall-out in the AUD to a degree. 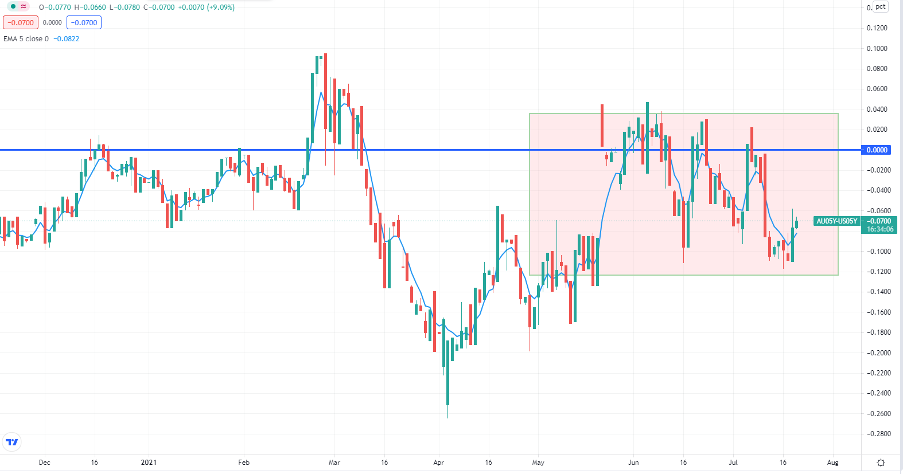 Relative rates aside, it's clear the market is warming to the idea that the RBA will be the first bank to effectively pivot – obviously forced by lockdowns, but the fact is with Australia’s relatively low vaccination rates there's no guarantees we won’t see lockdowns again – whereas the barriers for lockdowns and far greater economic uncertainty in say the US or UK are far higher. In a world trying to price risk derived from economics, Australia wears one of the larger premiums in G10 FX now.

Emerging market equities also look vulnerable and the AUD has at times worn a reasonable correlation with this variable. If it weren’t for the move lower of late in USDCNH (Yuan) I’d argue AUDUSD would be even lower – so whether we’re eyeing domestic factors or traditional correlations and proxies the AUD is fighting a battle on several fronts. This dynamic simply keeps the buyers away for now and is attracting increasing speculative flows, mostly from the short side. 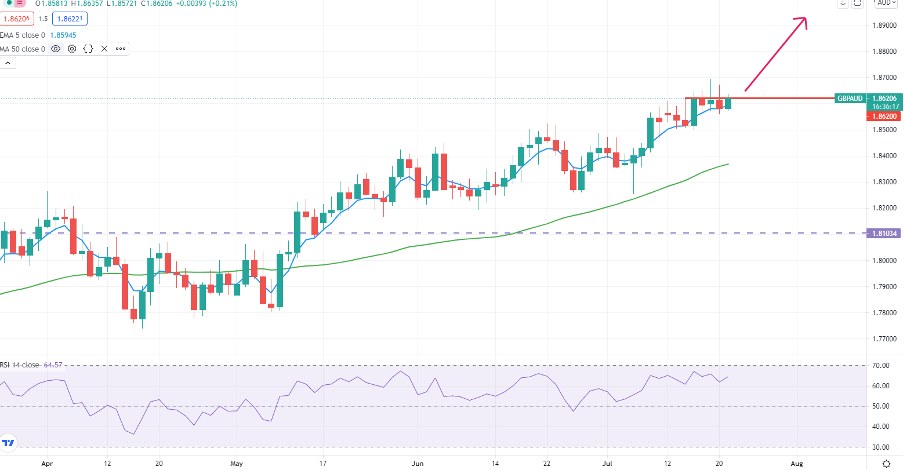 Near-term the AUD bear trend is mature, and we look ahead to next week’s Aussie Q2 CPI - but the diverging paths from central banks, AUD rallies should be sold and talk of 70c will be all the rage soon – AUDCAD looks set for a re-test of 0.9250 and GBPAUD should look to resume its trend into and above 1.8700. Ready to trade the opportunity? Trade it with Pepperstone.