Luke Suddards
Research Strategist
A chaotic week comes to a close. Carnage out of China, Fed meeting, US Q2 GDP - this week had it all. Let's take a closer look below.

The dollar has been softer this week, retracing its previous weeks’ gains. Despite the risk-off concerns ignited by China, the greenback couldn’t catch a bid. Some factors which could have caused this 1) Real yields moving aggressively lower 2) Lack of conviction pre-Fed meeting 3) Thin liquidity. Then the FOMC meeting arrived and erred on the neutral to dovish side. At first, the dollar pushed higher on the line “the economy has made progress” towards its goals necessary to taper. This was offset by dovish insertions into the statement such as sectors most adversely impacted by the pandemic “have not fully recovered” and the removal of “progress on vaccinations has reduced the spread of COVID-19 in the United States" (highlighting delta variant risks). Also, if it wasn’t known before it is now – Powell explicitly defined substantial further progress as gains in the labour market (which remains some ways off), essentially making the price stability part of their mandate take a back seat. Powell wants to see strong US jobs’ reports. Yesterday’s weaker than expected initial jobless claims raises question marks before next week’s payrolls numbers. To wrap up on the Fed side they also announced the creation of a foreign standing repo facility, which should dampen repeats of the dollar short squeeze we saw at the height of the pandemic. On the fiscal stimulus front, the $550 bln infrastructure package is moving ahead with hopes of wrapping things up prior to August 9. CFTC positioning data from last week shows net speculators are now net long $2 bln since March 2020. This provides ample room for fresh longs to be built up, which we’ll know from fresh data out this evening. Later today, we’ll get the Fed’s preferred inflation metric PCE, which could set the tone into the weekend. Yesterday’s US Q2 GDP disappointed expectations by 2% points coming in at 6.5%, which indicates US GDP growth seems to have peaked (although still solid and above pre-covid levels). Notoriously difficult to call, but Citi’s month end model points to some dollar selling. Will be interesting to see if we close above the 92 level into the weekend. 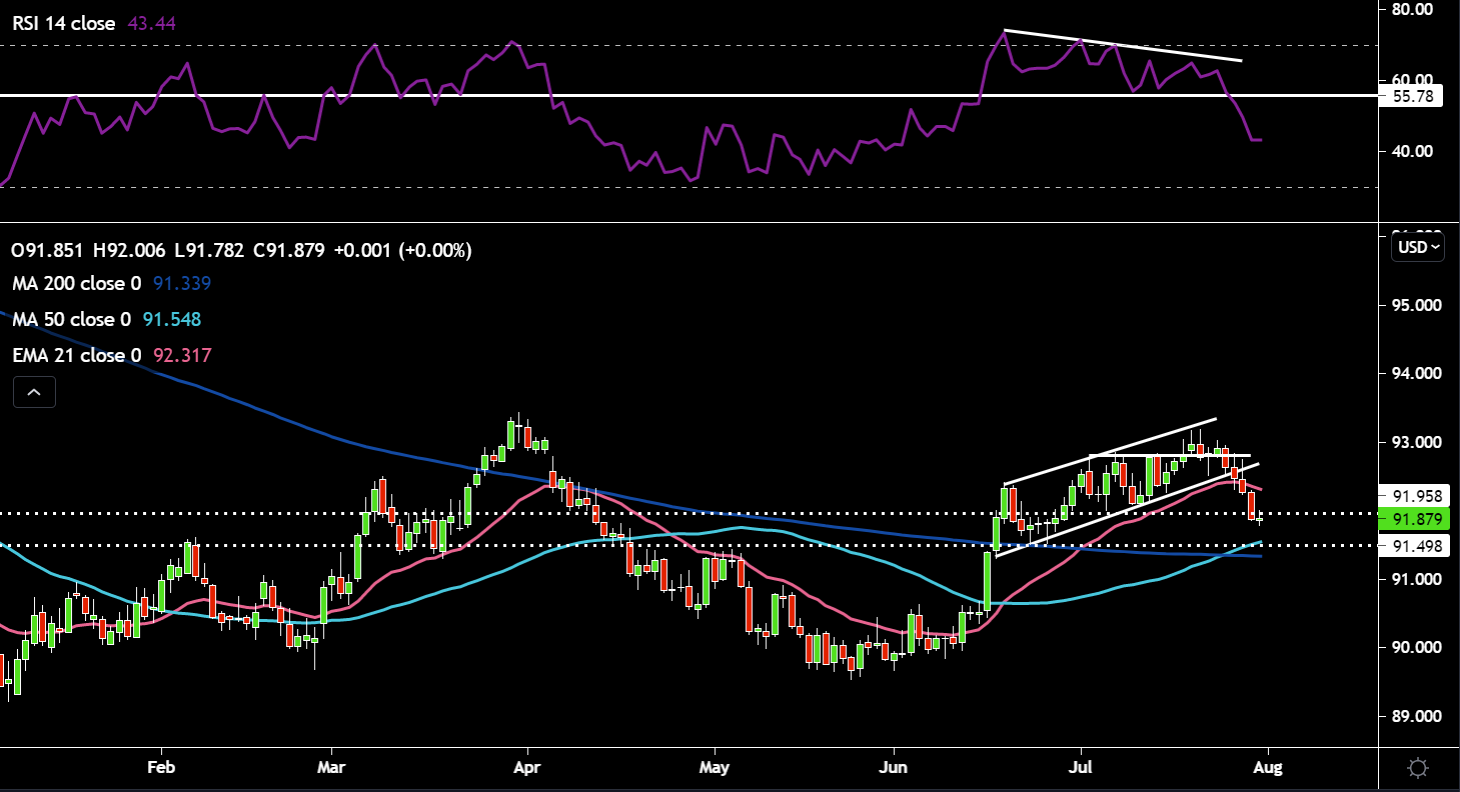 Price has fallen out of its ascending channel and currently resides around 92. The golden cross (50-day SMA above 200-day SMA) which took place recently is an important factor for dollar bulls and may keep dips bid. The RSI was showing some negative divergence as price made higher highs, but the RSI began to make lower highs around overbought levels. It’s also slipped below the 55 level which acted as support on previous price dips. In terms of targets, on the upside I’d like to see price move back above the 21-day EMA around 92.376 and into the ascending channel. Beyond that the March 31 high of 93.437 would come into play again. On the downside, if 92 gives way then 91.5 horizontal support would be key which also happens to be right around the 50 and 200-day SMA.

The single currency’s fortunes have turned around against the dollar, using 1.175 as a springboard EURUSD has been pushing higher. There isn’t really anything that stands out to me which could explain this move besides dollar specific weakness. In terms of economic data, Germany, the largest Eurozone economy provided us with plenty to work with. Both the Ifo and GfK metrics missed expectations, however, unemployment and inflation data surprised to the upside. Unfortunately, this positive beats trend was not carried over to GDP data which missed quite substantially. EURUSD is pushing higher today on euro wide Q2 GDP figures beating estimates comfortably with core inflation only very minorly missing. We saw another trimming of euro net longs on the positioning front last week. 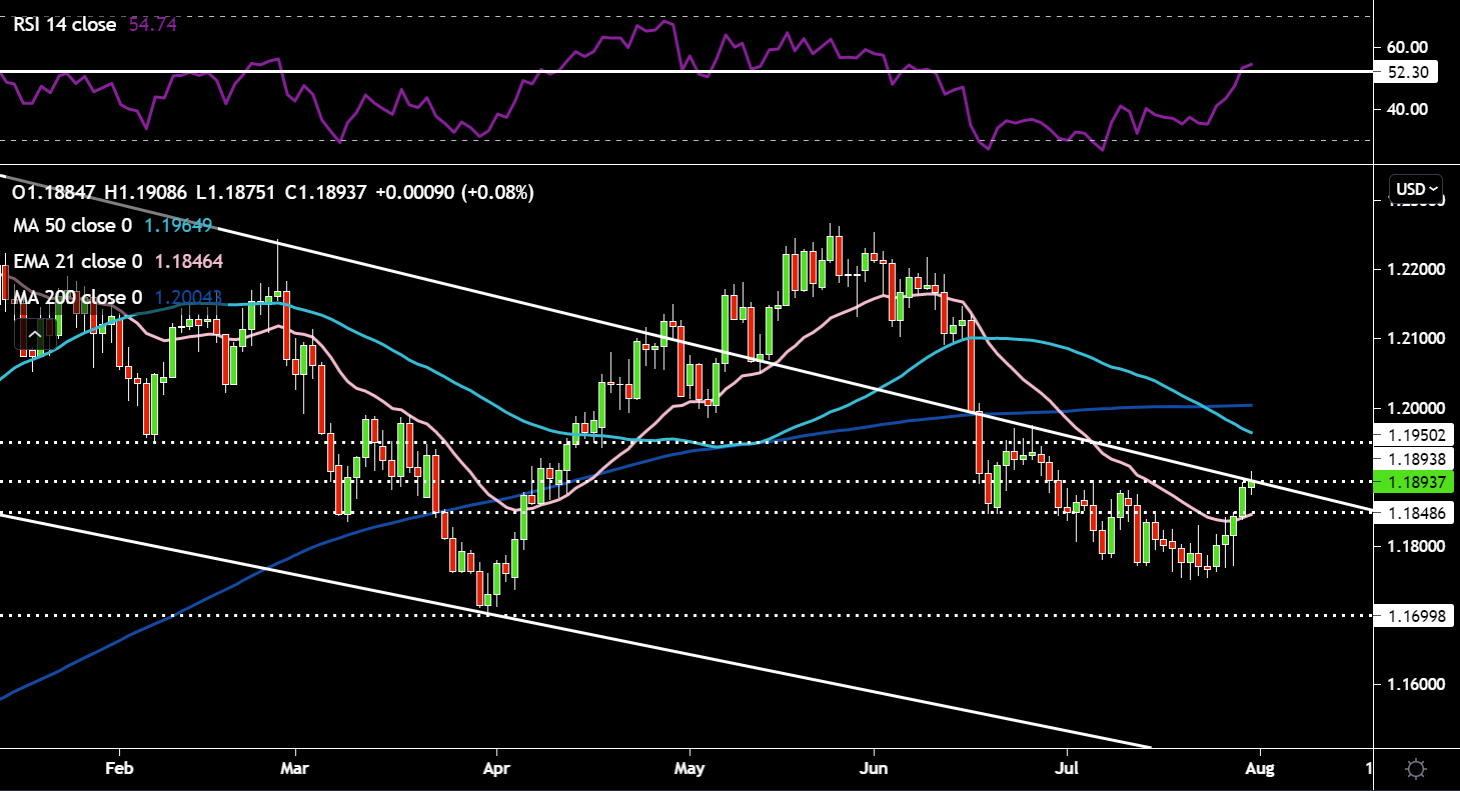 Price is now slightly above the 1.19 overhead resistance and upper trend line of the descending channel. The RSI has to rallied above the 52 level which tended to cap previous price rallies. The death cross is a headwind for the EURUSD. Targets wise, on the upside will be 1.195 and above that 1.20 (around 50-day SMA and 200-day SMA). Looking South, 1.185/21-day EMA would be a flash point as well as the former base around 1.175. A more aggressive sell-off could take us down to the March 31 lows around 1.17.

Cable has been rocketing higher, similarly to the euro taking advantage of the weakness in the dollar. Virus data is looking solid, with cases continuing to decline and hospitalizations remaining low. The pingdemic is still unfortunately keeping substantial amounts of consumers locked up in their homes with August 16 seeing these restrictions removed. Positioning data indicates that speculators have turned net short on GBP. Most sterling traders are now casting their eyes towards next week’s BoE meeting where we’ll get an updated set of economic projections and see whether the recent hawkish rhetoric by some will be backed up with dissenting votes on asset purchases (I’ll be writing a preview for this next week). 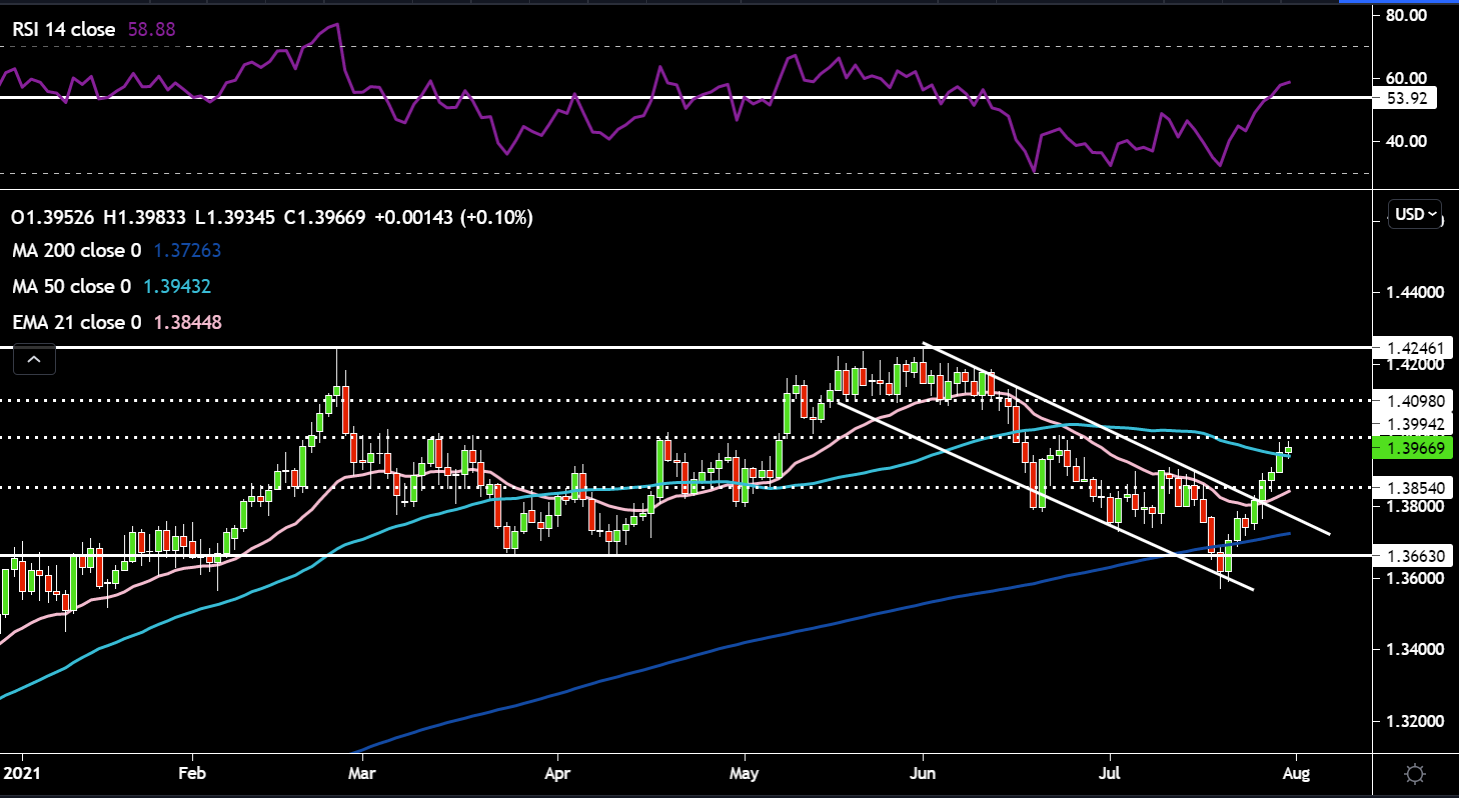 Price has bounced off its 200-day SMA, range support and weekly lows around 1.36. Price has now overcome the 50-day SMA and slightly above that the resistance of 1.40 is in play. The candles have bullishly broken out of the mini descending channel which formed adding fuel to the bulls’ fire. The RSI has also crept above the 53 level which was working to cap gains previously. There is plenty room for Cable to run before it can be considered overbought. Targets wise, on the upside the first level to be negotiated will be 1.40 then 1.41 resistance – from there the range resistance at 1.426 could be eyed by traders. On the downside 1.385 near the 21-day EMA would be a good area of interest. 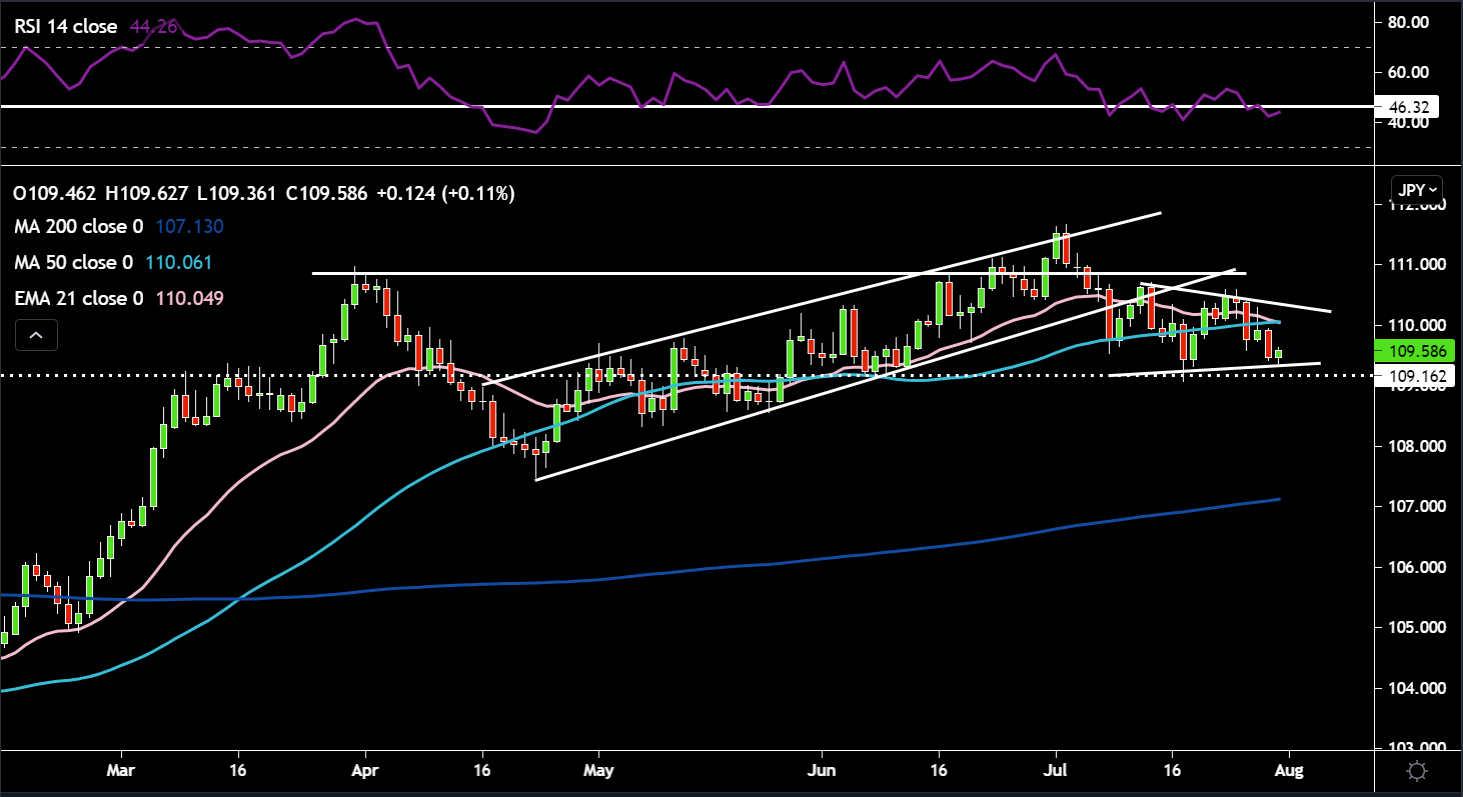 Dollar yen is struggling to find its next direction, remaining rangebound similarly to US 10-year yields. A small triangle pattern has formed, which tends to precipitate a breakout move. The RSI is just below the key 46 level which has supported price pullbacks previously. The 21-day EMA has crossed below the 50-day SMA, which would be short term bearish. A downside breakout of the triangle would bring 109 support into play, while an upside break would bring 111 into view.

The Aussie dollar has been surprisingly resilient despite issues over in China and lockdowns being extended in Sydney for another 4 weeks. Next week’s RBA meeting has the potential for a dovish surprise with many thinking we could see a reversal of the A$1 bln weekly taper as well as a downgrade of its growth and employment projections. 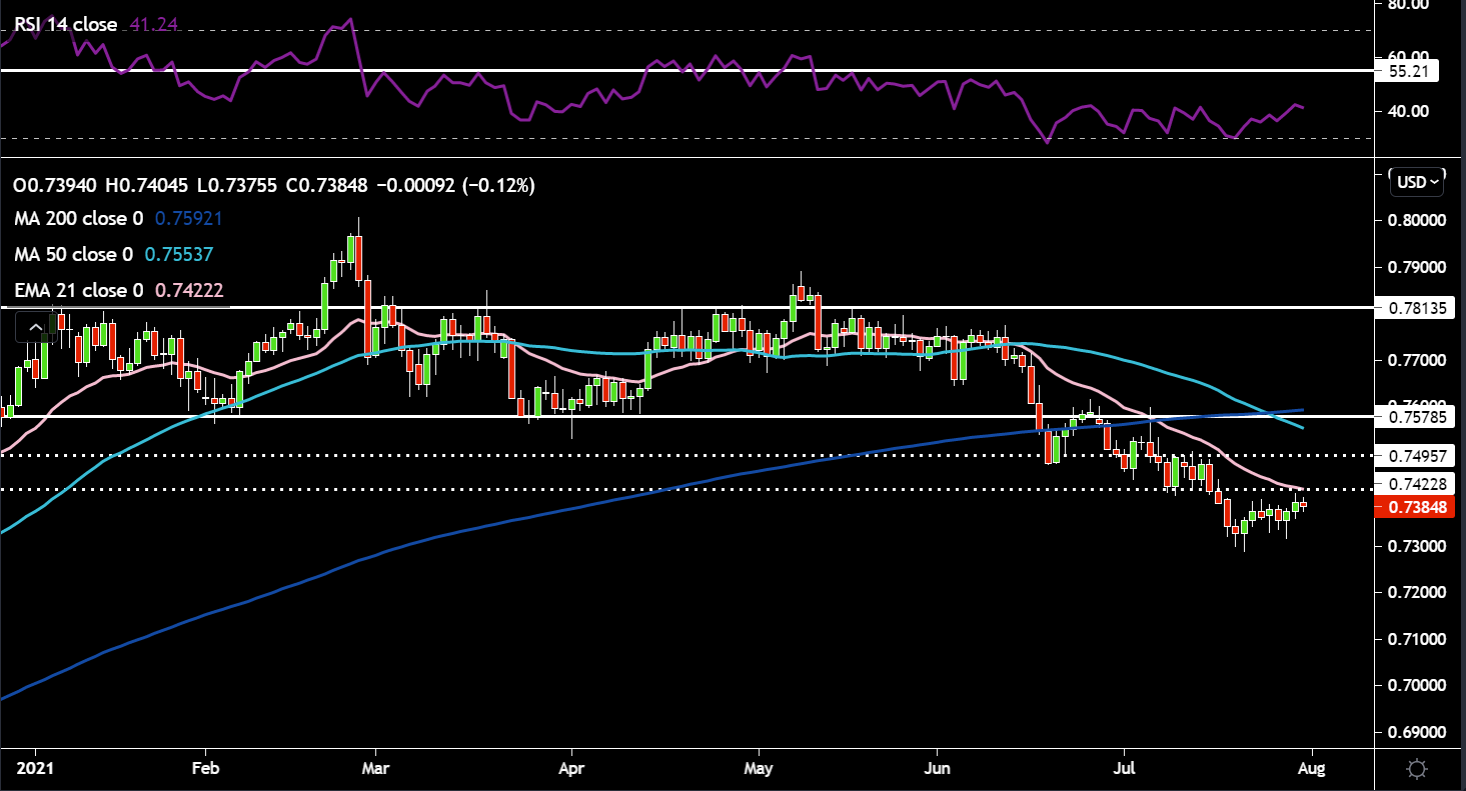 Price has the 21-day EMA in its crosshairs around 0.742 (also happens to be key former support which could now act as resistance). The RSI has made some negative divergence which probably helped stem further selling momentum. However, the dreaded death cross has been made for AUDUSD. Targets on the upside sit at 0.742 and 0.75. While on the downside, the 21 July low of 0.728 and 0.725 support would be of interest.

The yellow metal is back in vogue and the stars seem to be aligning for the precious metal. Record low negative real yields, a weaker dollar, some risk-off all mixing together to form a potent bullish cocktail allowing gold to break out of its multi-week range. A strong PCE inflation print out later today could help price push even higher. 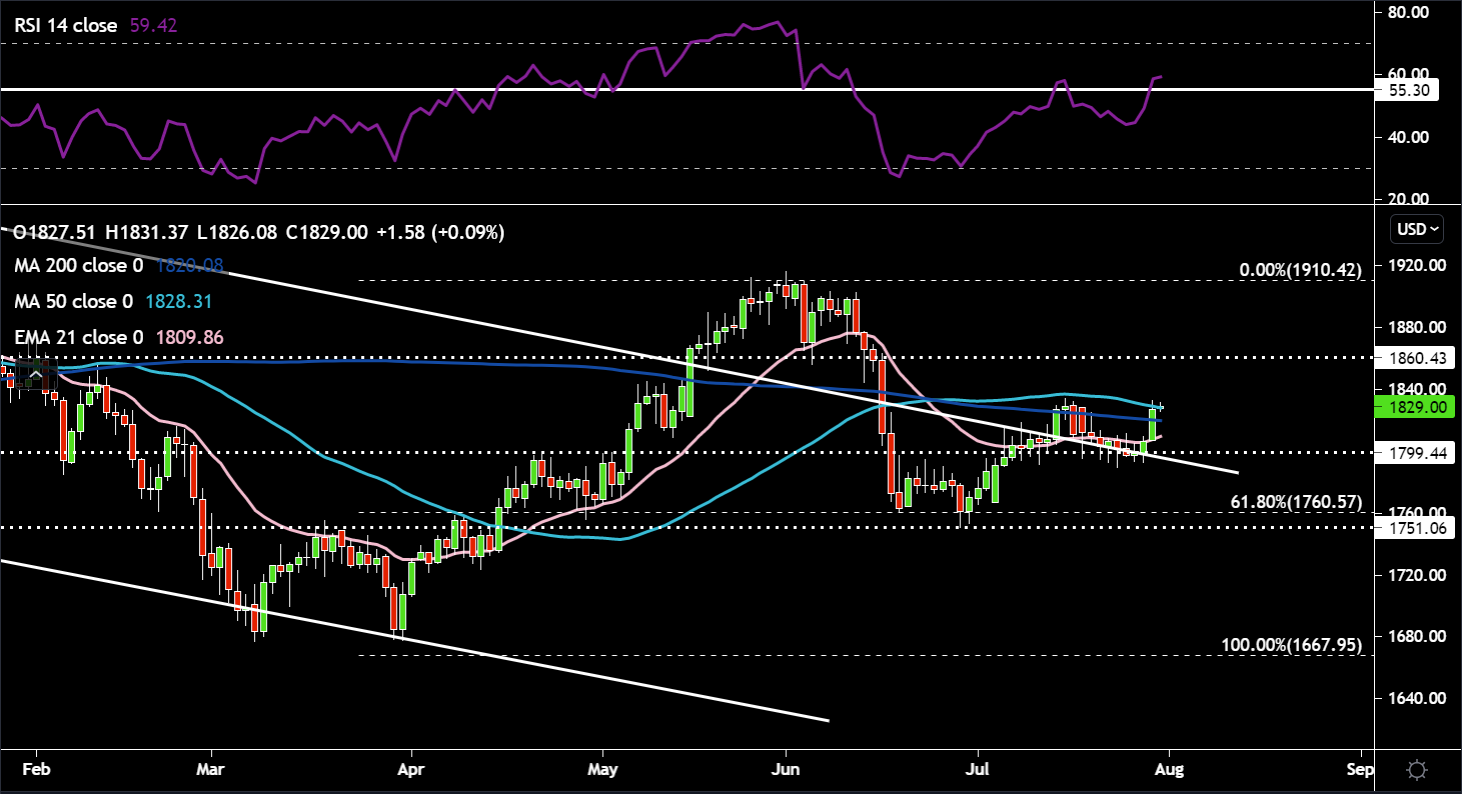 Gold has put in a huge bullish candle rebounding off the 21-day EMA, slicing through the 200-day SMA (triggering some stops) and now contending with the 50-day SMA around $1830. This is keeping the death cross at bay for the moment. The RSI has surged above the 55 resistance level. Higher moves from here could take price to $1860 horizontal resistance. To the downside, the $1800 support just below the 21-day EMA and coinciding with the upper trend line of the descending channel will be an important level. Below that the 61.8% Fibonacci level around $1770 is key.

The black liquid has managed to stage a robust rebound. There are a couple factors working in crude’s favour – 1) A softer dollar 2) Larger than expected US inventory drawdowns 3) Healthier risk sentiment 4) Increased demand expectations on the back of double vaccinated EU and US tourists being able to travel to the UK quarantine free. 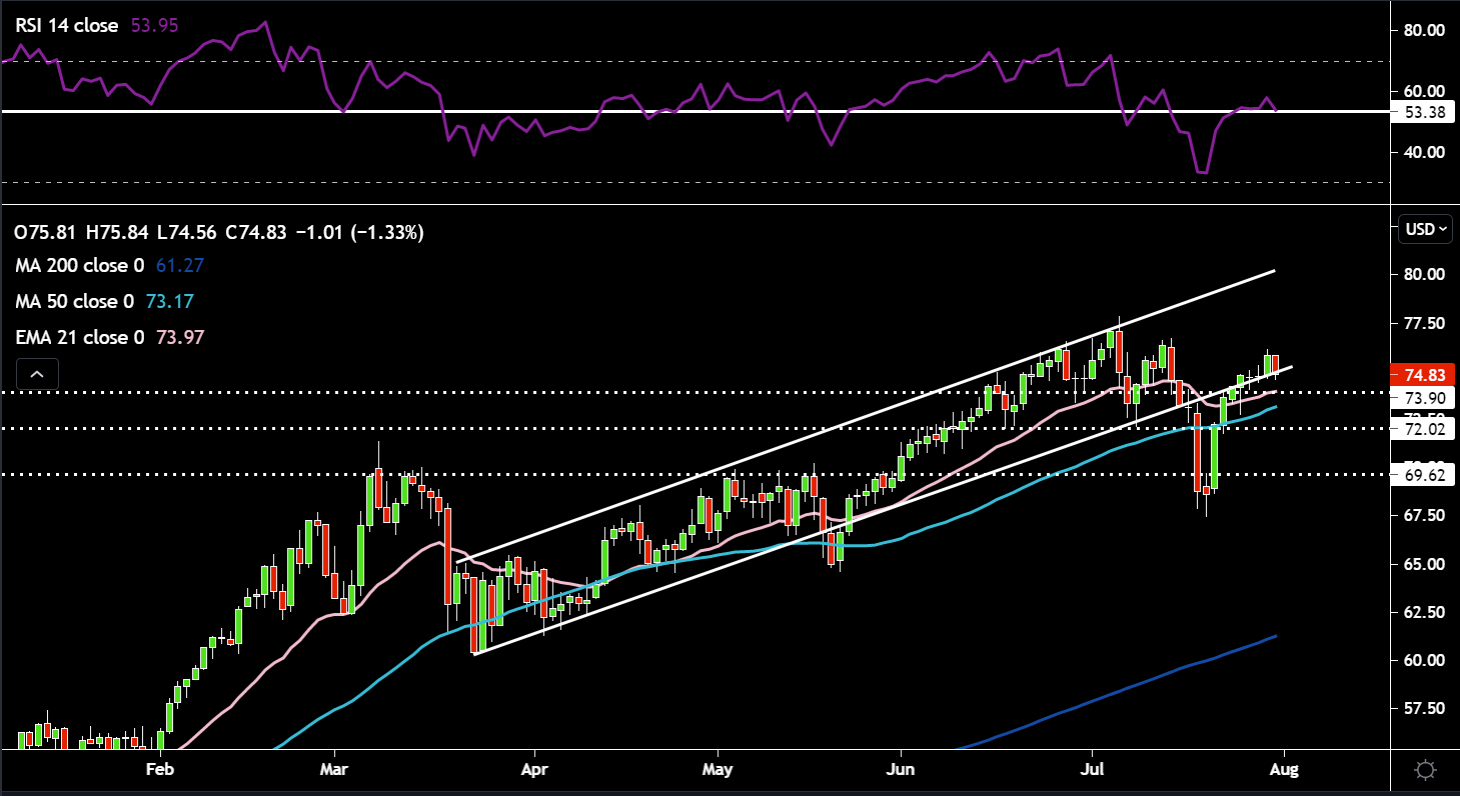 Price has moved back into the border of its ascending channel – back above both the 50-day SMA and 21-day EMA. With the RSI above 53, the technicals are looking good. Price is putting in quite a decent bearish candle today, so we’ll have to see whether it can hold the lower trend line of the ascending channel into the weekend close. The previous channel high around $77.82 is all that stands in the way enroute to $80. $72 and $70 are key support levels to monitor on sell-offs to the downside.

Bitcoin has moved almost 10k over the past two weeks with price now bumping right up against range resistance. Amazon dangling the carrot saying they’re investigating cryptocurrency, short covering deleveraging and those liquidating their Chinese equities choosing bitcoin over cash were the only catalysts to really drive price moves. One could also argue that Powell’s nonchalance regarding inflation fits the narrative for those that buy bitcoin as a hedge against fiat devaluation. 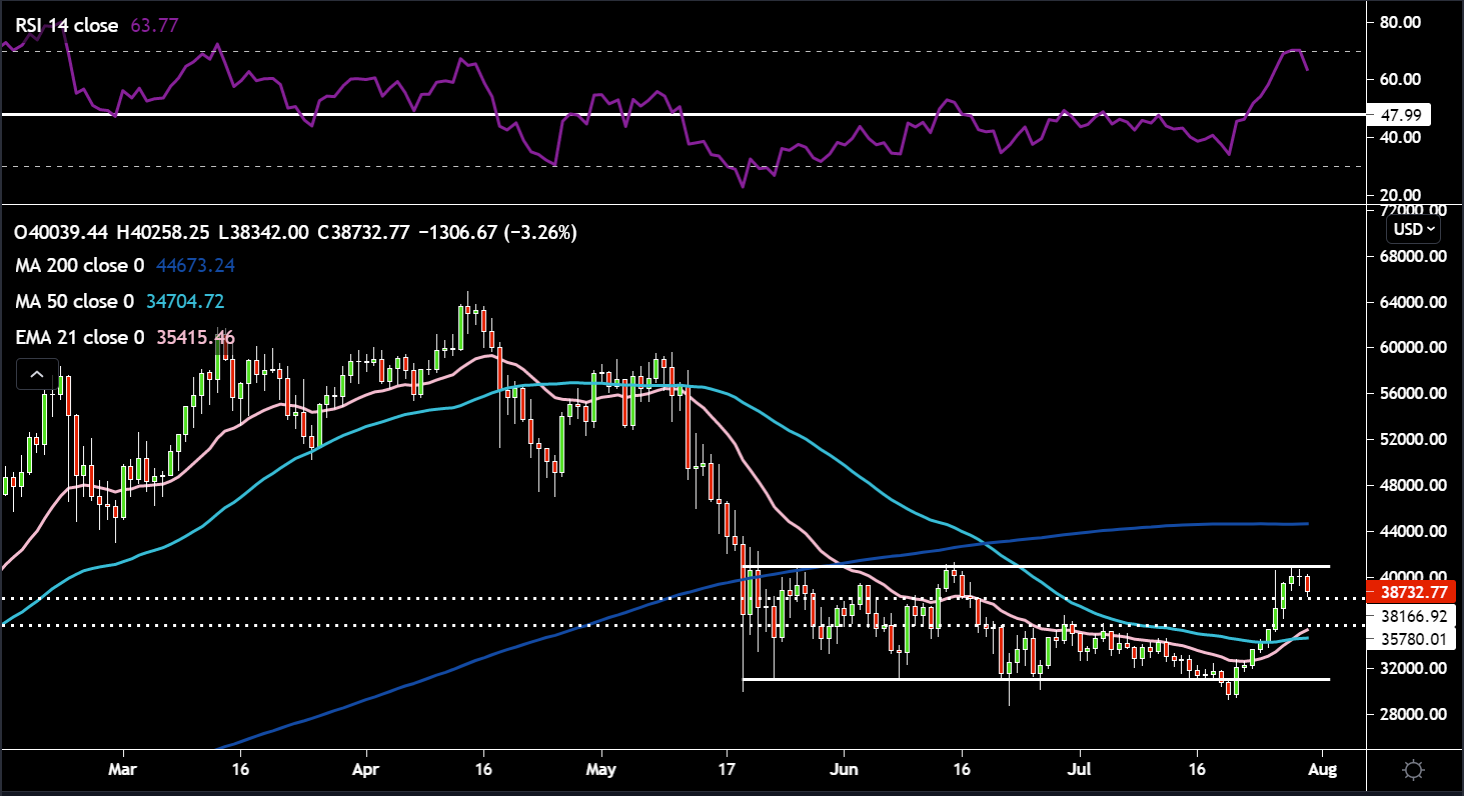 We’ve got a pretty sizeable bearish candle and the RSI looks to be turning downwards out of overbought territory. $38k would be a good level to watch, below that $34.6-35k (horizontal resistance, 21-day EMA and 50-day SMA) should see buyers come back in to scoop up the dips. The 21-day EMA has crossed above the 50-day SMA which is positive in terms of short-term momentum. Beyond range resistance on the upside, the 200-day SMA would be the next target around $45k.

Ready to trade one of the many opportunities above? Start trading FX, Commodities and Cryptocurrency CFDs now 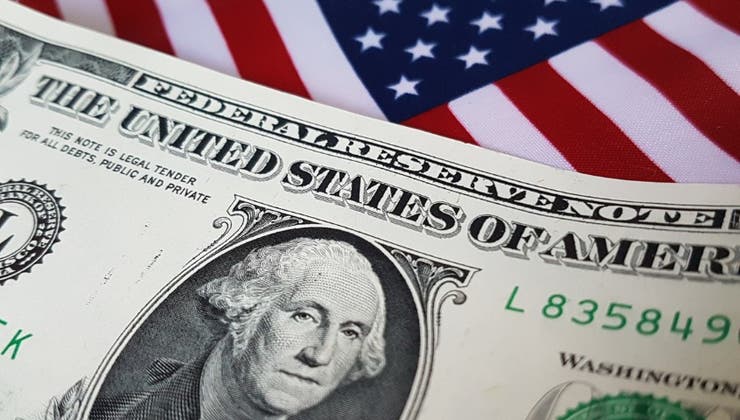 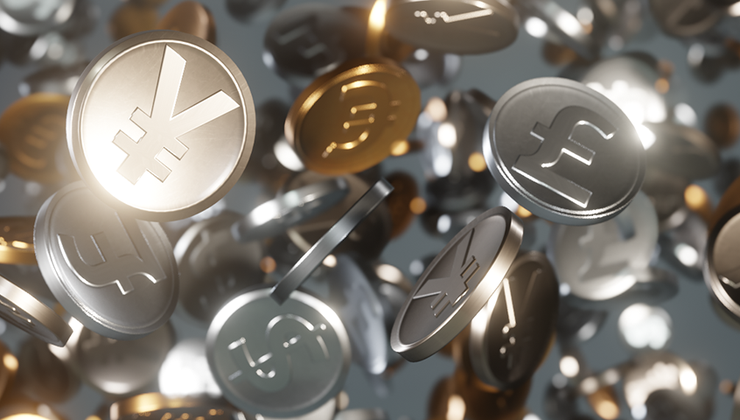