Luke Suddards
Research Strategist
From Russia with war? Read below to find out more.

The dollar had a spring in its step from the beginning of the week as more hawkish commentary from Bullard hit the wires. This was in conjunction with a significant escalation in Russia Ukraine tensions providing a further tailwind to the greenback. Fast forward to mid-week where risk assets liked what they heard with regards to a de-escalation of troops returning to their base. However, markets won’t be pricing out that risk premium just yet as the optimistic evidence is being disputed. PPI data out Tuesday was very punchy, easily topping estimates. Adding to overheating fears, Wednesday, delivered a surge in MoM retail sales as well as strong industrial production numbers. These data points will be interesting with the FOMC minutes later in the evening.

The minutes from the January FOMC meeting didn’t provide any surprises for the market, leading to a muted market reaction on a cross-asset basis. We didn’t get any clues on the 50bps hike for the March meeting (50% probability now from 70% prior to the minutes) as well as further colour on balance sheet reduction. However, we did get this which may have been the most interesting part of the minutes – “most participants suggested that a faster pace of increases in the target range for the federal funds rate than in the post-2015 period would likely be warranted”. That in my opinion, alludes to a more rapid front-loaded tightening cycle (just over 6 hikes priced by year end according to Fed Fund Futures). I also think the minutes are fairly stale given we’ve received some really solid jobs and inflation data out of the US ex-post. Initial jobless claims were above expectations, coming in just shy of 250k. Conditions remain choppy as the market gyrates as a result of the Russia and Ukraine tensions. Basically a news flow driven market. Next week Tuesday brings flash PMI data and Friday we get the Fed’s preferred inflation measure – PCE Price Index. 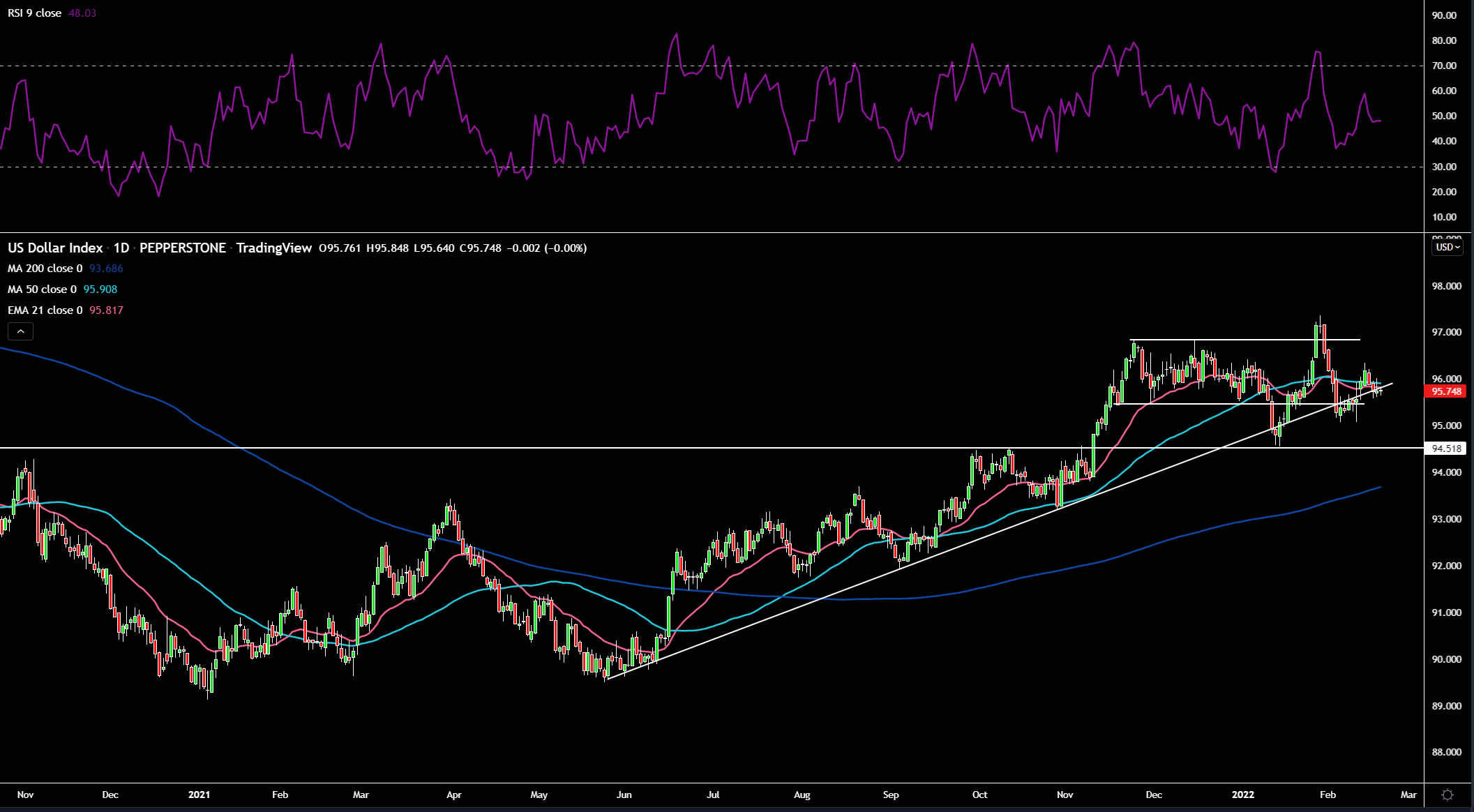 The dollar is hugging the uptrend line and just below its 50-day SMA and 21-day EMA. The RSI is in no man's land, so no discernible information from the momentum indicator. Targets wise, on the upside 96 and 96.5 on the upside will be important. On the downside, one could look towards 95.5 (not far from there currently).

The euro felt the brunt of rising tensions over the weekend to start the week off in the red, however, as news flow improved on this front the euro responded in kind pushing higher. France’s central bank Governor Villeroy, seen as a more dovish member on the ECB, stated he would like to see APP ended in Q3 of this year. He did caveat this by remarking that this would not automatically mean a rate hike immediately after. Influential GC member Schnabel believes that inflation will likely stabilize around 2% in the medium term, which warrants finding the correct balance between tightening policy too rapidly or falling too far behind the curve. Latvia’s central bank chief, Martin Kazaks informed markets that an interest rate hike this year is quite likely. The German ZEW Economic Sentiment Index was a bit of a dampener on optimism about the economy with expectations missed. Eurozone industrial production brought better news outperforming forecasts for December. Chief Economist at the ECB, Philip Lane, spoke today and kept things tilted more dovishly as he usually does. However, I did find his language a tad sloppy given the market is on a hawkish edge at the moment. He stated other increments of rate hikes are possible beyond 25bps. Now I’d be very shocked if the ECB went in an increment higher than 50bps and I’m sure he meant 10bps, but using the word beyond in my opinion is usually associated with something larger. Next week Monday brings PMI flash data for the eurozone and Germany. 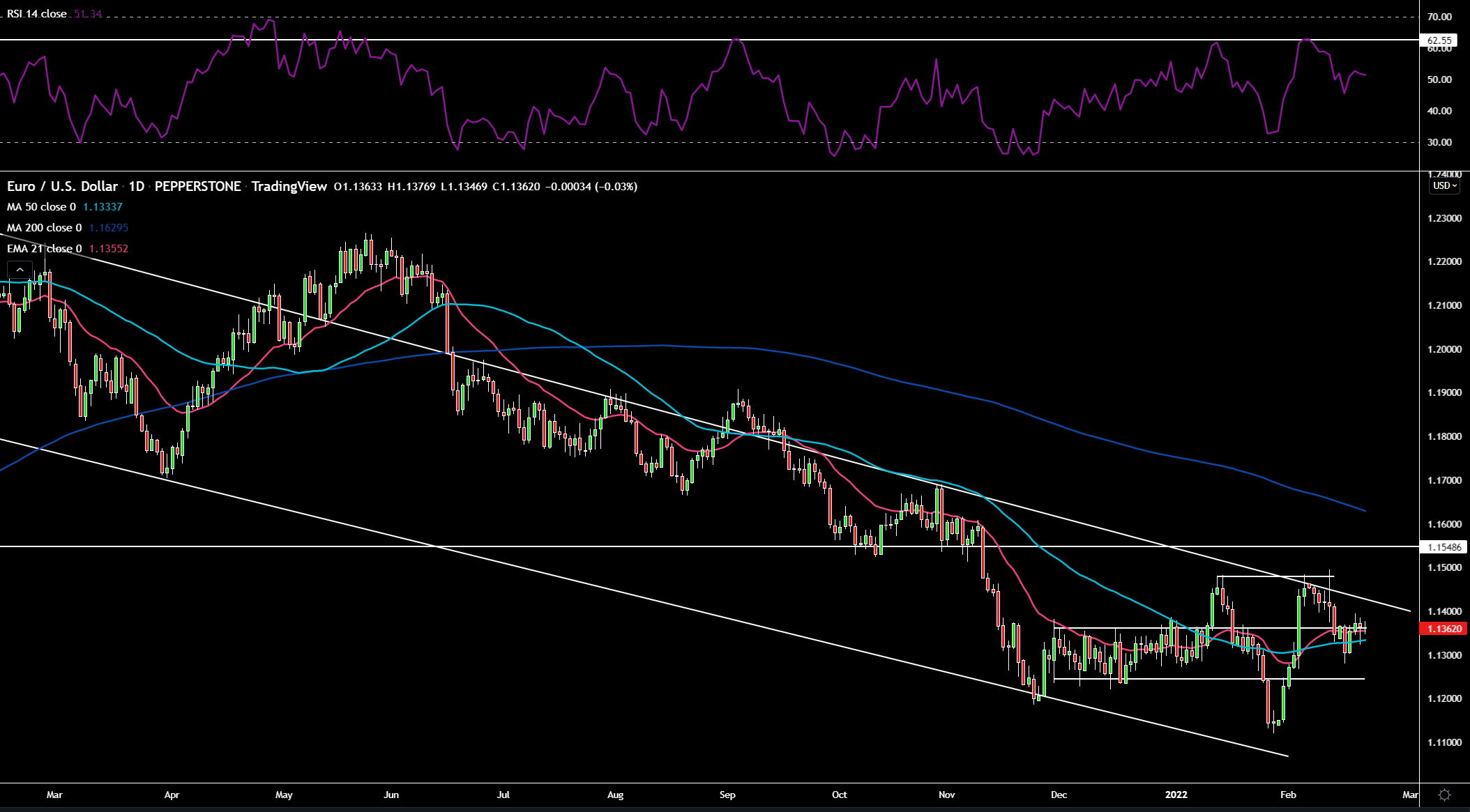 EURUSD is just above its former range resistance at 1.135 and the 50-day SMA. The RSI looks to have a slight tilt to the downside as it failed to breach the 62 level. Downside targets would be around the 50-day SMA and then lower from there 1.13. On the upside the downtrend line might provide some resistance and then the former highs around 1.148.

A data heavy week for GBP with important read through for rate expectations for the BoE’s March meeting. Beginning with average earnings including bonuses which printed at 4.3%, far above the 3.8% consensus with employment changes declining by less than predicted and the rate of unemployment holding constant at 4.1%. Wednesday morning saw the release of the UK’s inflation data, with the headline figure at a new 30 year high (5.5% YoY vs 5.4% exp). Core was also hot at 4.4% YoY vs 4.3% exp. MoM numbers showed a 10bps decline for January as opposed to 20bps forecast by the market. We’re now 3.5% points above the BoE’s inflation target of 2%. Despite the hot numbers, 2-year Gilt yields actually declined throughout Wednesday as well as seeing a modest fall in OIS too. This could just be short term positioning changes or it may be that the market was expecting even higher inflation figures. Retail sales out this morning came in nice and hot (topped expectations), both on a YoY and MoM basis. Next week we will receive flash PMI data for the UK economy, landing Monday. 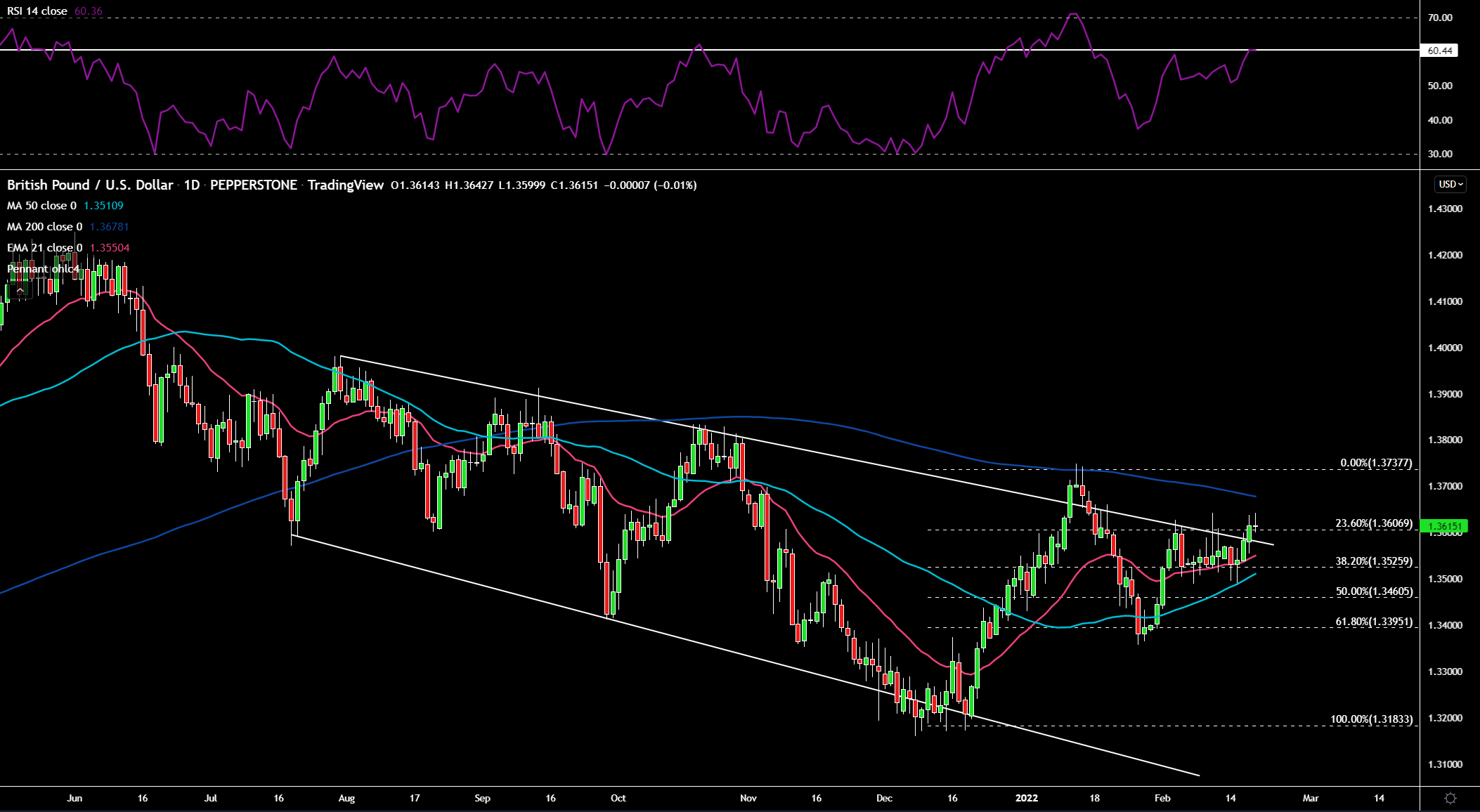 GBPUSD is more interesting when examining the charts. A breakout above the downtrend line and sniffing close to the 200-day SMA. Price is also sitting above the 23.6% Fibonacci level. The RSI is visiting the 60 area which in the past has proven quite a robust form of resistance. Target on the upside would be the 200-day SMA. On the downside, the 38.2% Fibonacci level and 50-day SMA could provide price with a floor.

The BOJ responded to traders testing its upper band limit of its YCC at 0.25% by announcing to buy an unlimited amount of bonds in order to make sure this band is not broken. The more aggressive method would be to carry out a fixed rate operation (essentially target a specific yield level). Geopolitical risk is always good for a currency like the yen, so while this situation remains unresolved, the yen will continue to attract safe haven related flows. Inflation numbers out Thursday evening. Japanese CPI data out overnight certainly keeps the BOJ in easy mode for the foreseeable. The YoY headline figure for January came in below expectations at 0.5% and was lower than the previous month’s figure of 0.8%. Core rose 0.2% YoY (lower than the previous month and expectations). 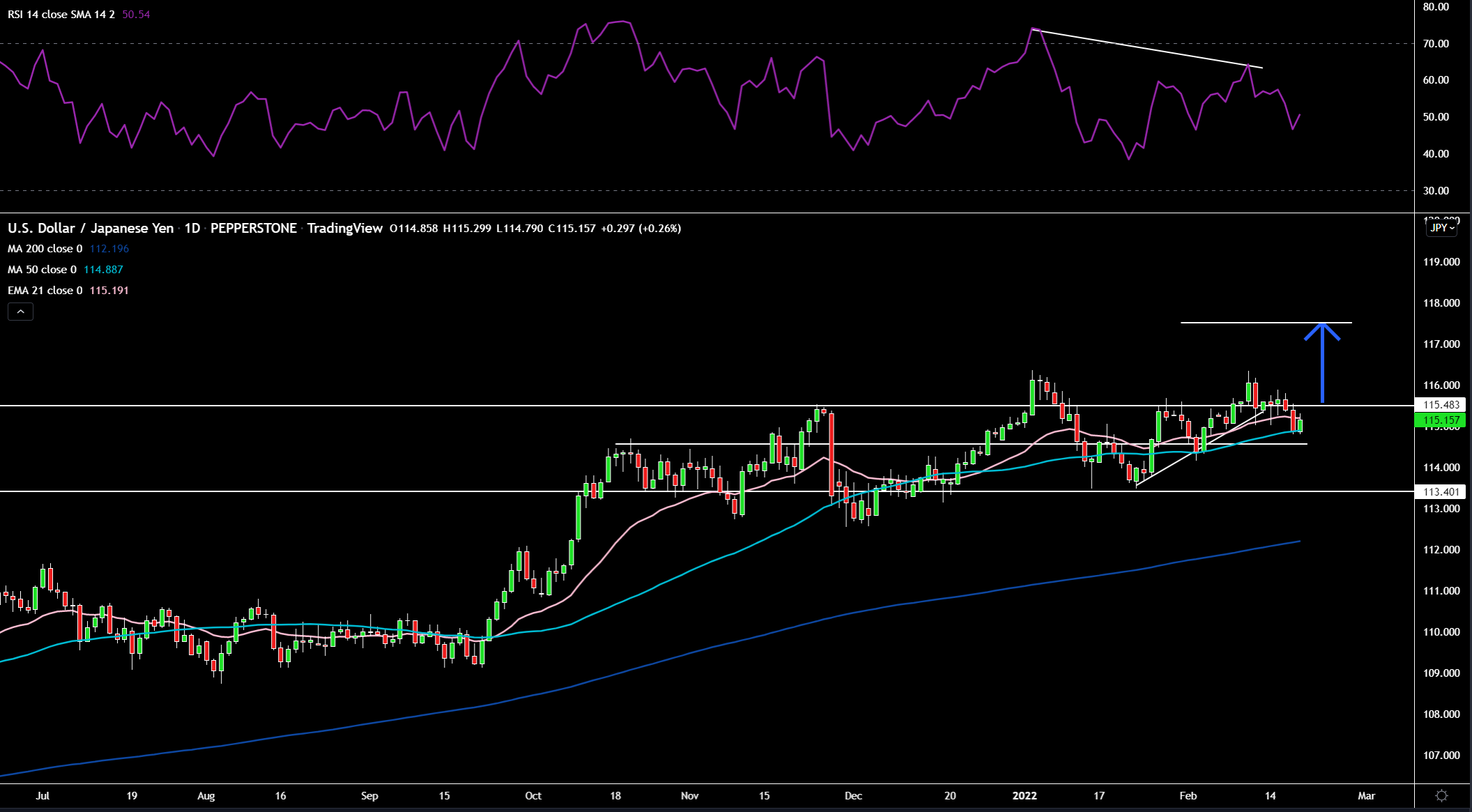 The flat sided ascending triangle pattern looks to have been invalidated with the yen attracting safe haven flows. Price is now back to the 50-day SMA and not far from the support at 114.5. The RSI is showing some divergence when price tried to push higher recently. Maybe the failure of the flat sided ascending triangle will now transform into a double top pattern? Targets wise on the upside 115.5 looks decent and a further break beyond there would bring the former high into play. On the downside, 114.5 is the one to watch.

Gold continues to fluctuate as risk sentiment ebbs and flows in relation to the drip feed of Russia Ukraine headlines. The Fed minutes lack of fresh surprises did nothing to dent gold’s emphatic run. Flattish real yields and a softer dollar will also be helping the yellow metal’s run. Thursday gold surged on the back of news about shelling in the Donbas region by Ukrainian forces, with fears that this was a pretext for an invasion by Russia. $1900-$2000 is certainly now in the crosshairs. Today’s price action is softer on the back of a meeting scheduled for next week between US Secretary of State Blinken and Russian Foreign Minister Lavrov, with the conditionality of no invasion to take place if the meeting is to go ahead. This gave markets a glimmer of hope. My boss and Head of Research Chris Weston wrote a great piece on all things gold here. 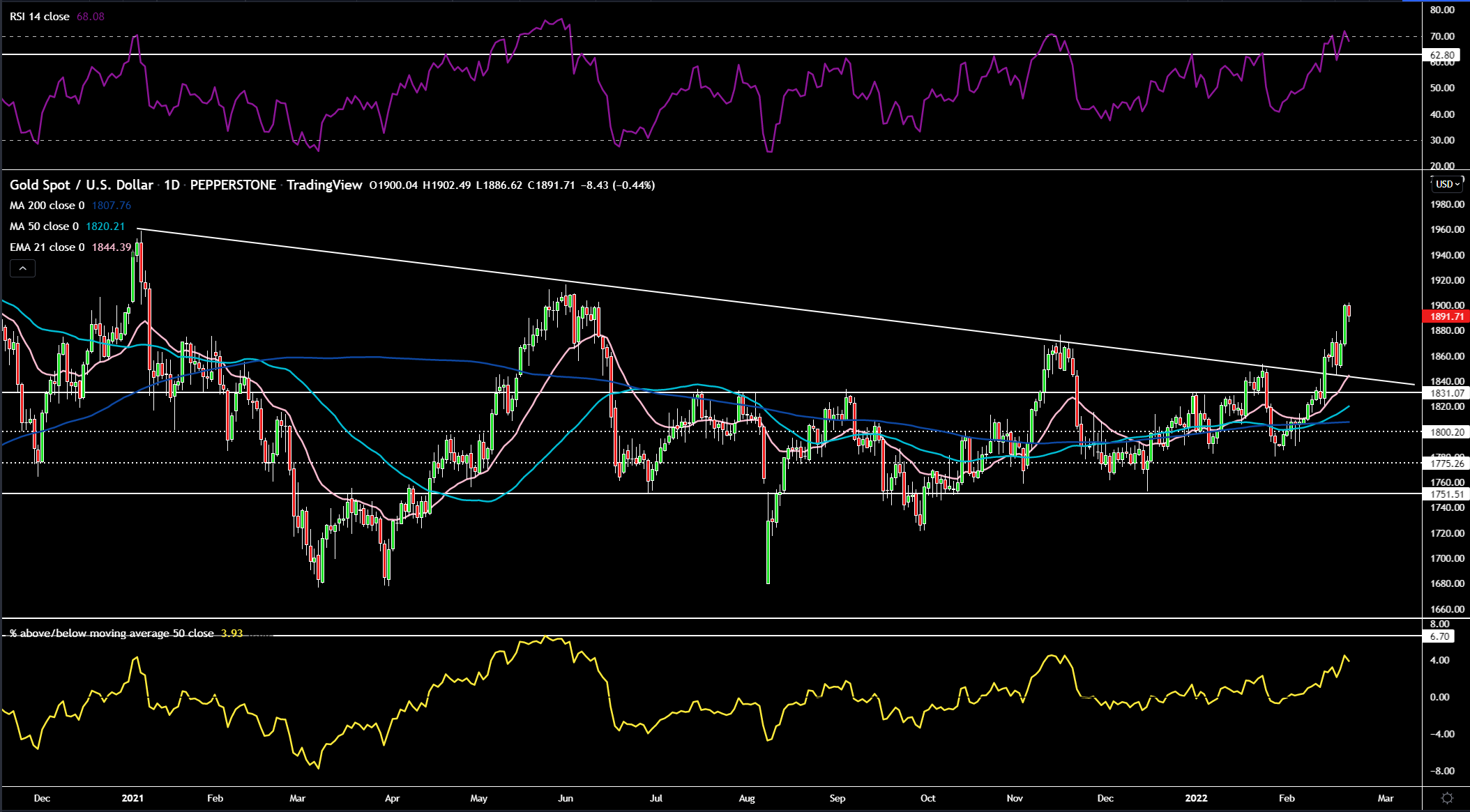 Gold has emphatically broken through the downtrend line in place since the beginning of last year. Price is fairly elevated above the downtrend line still too. The RSI crept into overbought territory and has now reversed lower. I've added another indicator the chart at the bottom. This shows the % above/below price is from the 50-day SMA. Currently, it's quite extended around 4 (close to where it got at the end of last year). Targets wise on the upside $1916 (high in June 2021) and then $1960 from January 6 would be the levels to watch. On the downside, $1880 looks to have some support and the trendline around $1850.

Another asset with a high beta to geopolitical news flow over in Ukraine. With war on the cards crude soared on Monday, but then quickly reversed those gains when news of troop withdrawal arrived. Traders will remain on edge, having to remain nimble in case a geopolitical risk premium needs to be priced in or out. Iranian nuclear talks are back on the agenda again with the French Foreign Minister stating that a decision on whether the deal progresses or collapses was days away. Iran needs to accept the terms presented to them. US inventory data rebounded and showed a build, while markets had expected a drawdown. Supplies still remain tight in Cushing though. On Wednesday evening we also had oil sell-off aggressively when the Iranian Nuclear talks negotiator stated that a deal has never been closer. Then Thursday morning saw the geopolitical risk premium take pole position and drive crude higher. Crude is down almost 2.5% as we go into the weekend on the back of better risk sentiment. 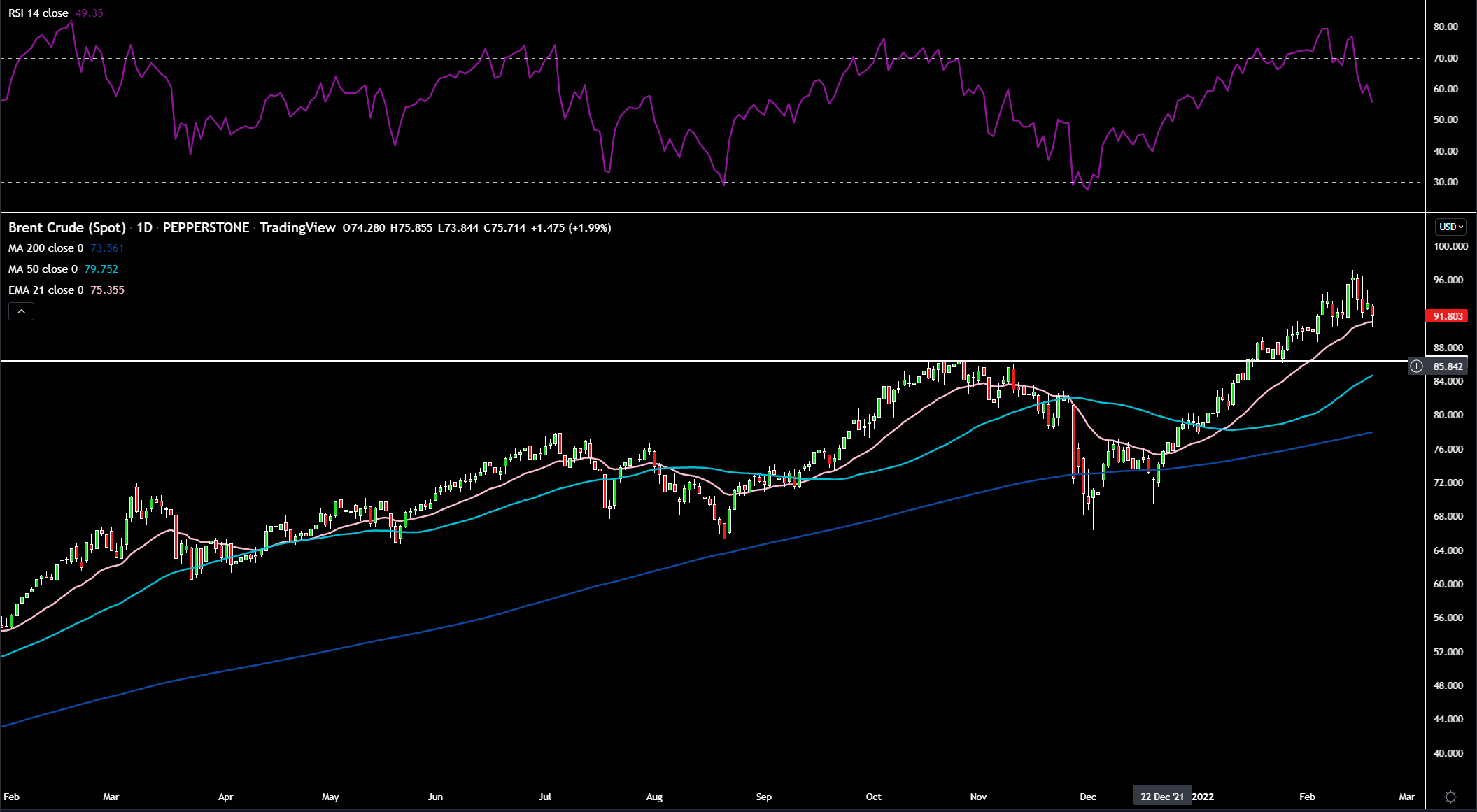 Price is trying to recover a touch off its 21-day EMA. This has worked quite well as a dynamic uptrend line. $91.5 shows some support for the time being. Below there $90 comes into sight. On the upside moves towards the previous high of $97.1 would bear watching.

A gold traders playbook - the rise and rise of Gold 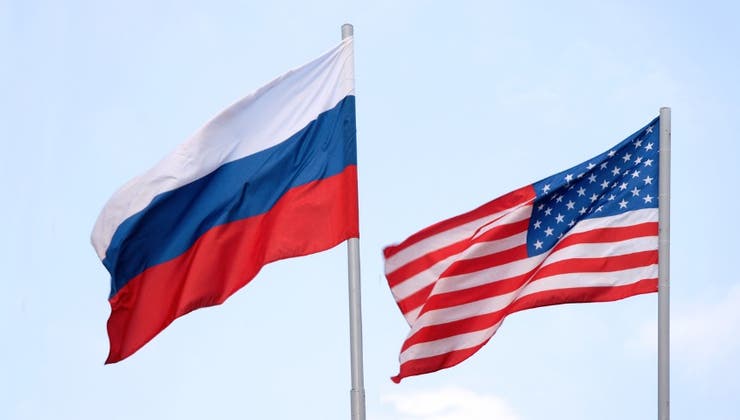