Panic has ramped up as the World Health Organisation declared the coronavirus an official pandemic overnight. Seattle became the first major American city to close schools while many others ban gatherings of over 1000 people. The NBA has cancelled the rest of its season. Across the Atlantic, Italy saw a 31% increase in virus fatalities overnight and closed all businesses except grocery stores and"pharmacies.

Markets had been expecting more in the way of fiscal stimulus from President Trump when he spoke on Wednesday night (12:00pm Thursday AEDT). He assured viewers “this is not a financial crisis” and offered lightweight stimulus measures, including urging US Congress to approve a payroll tax relief measure. US stock futures extended their losses, as did Australian and Japanese stocks. USDJPY is down 1% in response to the limited"measures.

The coordination was a bazuka of policy in an attempt to cushion Britain’s economy from a drastic economic fallout. Cable price action was fairly choppy in the hours following the surprise rate cut but eventually closed 0.7% lower on the day at 1.2820. The FTSE 100 index (UK100) advanced more than 2% on the announcement of coordinated stimulus but went on to close 3.5% lower on the day. An emergency 50bp rate cut by the US Federal Reserve last week similarly failed to calm"markets. 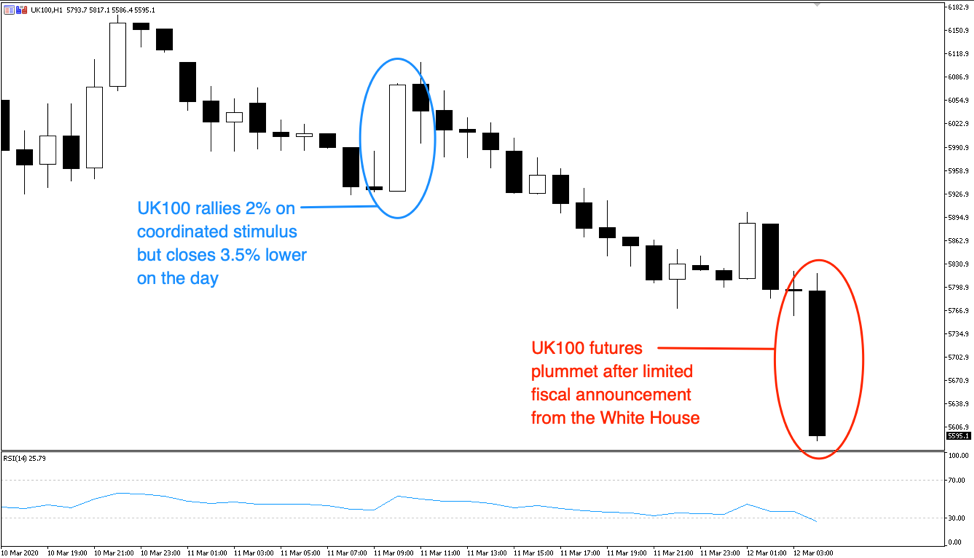