Homepage/The German election - what you need to know/
DAX

Chris Weston
Head of Research
Share
Amid rising volatility in financial markets, the German election is firmly in the market’s sights this Sunday.

There may be 47 parties running, with the distribution of outcomes varied, but the market has two or three outcomes which seem most likely to come to fruition.

There's always a tail risk when it comes to mixing political events and financial markets, but as it stands, there are three main coalition combinations that seem to be speculated as the most likely the play out. By way of referencing the bookie’s odds and in order of probability:

SPD, Greens and FDP (“Traffic Light”) - A small positive for EUR and GER40

CDU/CSU, Green and FDP (“Jamaica”) – A small EUR negative and while there is Greens involvement, this is quite close to the status quo.

SPD, Greens and Linke (“R2G”) – as discussed below, this could get the EUR firing and could hold big implications for Europe more broadly

With a focus on moves in the polls and despite a recent resurgence from the CDU/CSU party, the SPD party holds a 5ppt lead over the party (CDU/CSU) that Angela Merkel is leaving. The Greens have pulled back a touch to 16% but could still be highly influential in the outcome. 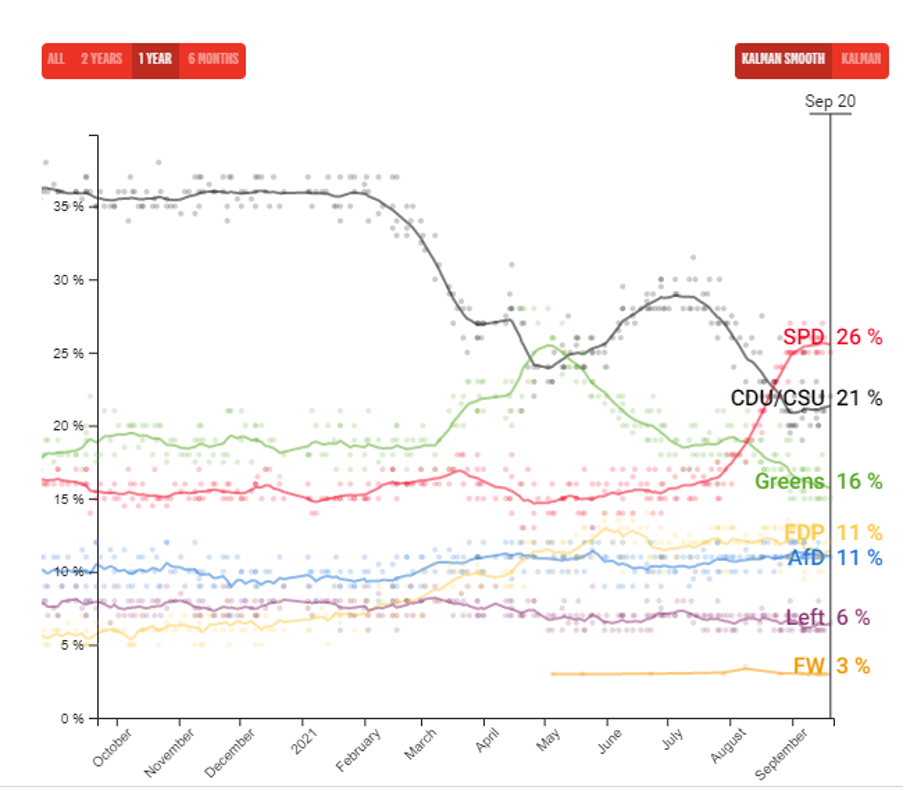 (Source: Politico - Past performance is not indicative of future performance)

It’s easy to be cynical of polls given what we’ve seen in Brexit, US elections and other countries elections (such as Australia) and we know that polls have had limits in assisting traders price risk efficiently. Then also consider that according to a survey conducted by Frankfurter Allgemeine Zeitung last week, around 40% of voters were still undecided – again, this makes positioning or hedging the outcome of the election challenging.

Polls open on Sunday at 8:00am (local time) and close at 6:00pm, with postal votes having already been cast. Exit polls will likely start coming out shortly after polls close. This means by the FX open we should have a good idea of how the landscape lies and each party’s share of the total votes – at this stage, the polls suggest that three parties will need to be involved to get the required votes (over 50%) to form a coalition. From here, negotiations to form a government may take some time to play out and it might not be until December that we get a firm result of the make-up of government.

However, should the polls prove inaccurate and one party gets a significantly higher share than polls currently detail, it could increase the prospect of two parties forming a government, which may reduce the waiting time and provide some certainty.

Looking back over the past eight German elections (from 1990 to 2017) and we can see that typically the open following the election is a low volatility affair. On average, EURUSD has dropped 0.3% on the Monday open, but this needs to take into consideration other macro factors and not just the German election. The equity reaction has been minimal, although the composition of the DAX is remarkably different this time around.

That said, more recently in 2017 we did see a sizeable downside move in the EUR and some will recall it took Merkel six months to form a government.

This is dynamic, but if we look at what the market is pricing by way of movement in the EUR pairs – they don’t see volatility initially – market pricing can obviously be incorrect though, which is why traders buy and sell volatility through options.

The implied move over the coming 30 days in the DAX is 1.7% - the highest level of implied movement since February – although, this is in fitting with implied movement in other equity markets and not specifically due to the election. Either way, when volatility is elevated it wouldn’t take much to cause a move in the equity market.

The tail risk – the risk for traders

Should the market get evidence of a high probability of the SPD, Green and FDP forming a coalition then it should be modestly positive for the EUR and DAX, but this outcome is largely discounted. There would be some scope for fiscal easing, but with the FDP involved it would curb some of the enthusiasm given their preference for cutting debt and broad fiscal prudence. There would be a strong mandate for climate change, but the Greens and SPD won’t comprise much on their climate policies – the FDP may need to step in line here. Financials could trade modestly lower.

The bigger market reaction and where we could see the market really underpricing volatility is on an outcome of an SPD, Greens and Linke government – this seems unlikely but not out of the question and in many eyes this coalition represents the biggest divergence from current policy settings. Even more so, if the SPD and Greens could find enough votes to form a government – that could really get the EUR firing and hold big ramifications for green energy names, not to mention banks which could see large shorting interest from clients given the Greens preference for increased regulation here.

The bottom line is the market is not seeing the election as a volatility event, perhaps given the length of time likely needed to form what will is expected to be a centre-left government. However, polls, as we know over many case studies are fraught with inaccuracies and there's certainly the risk there of an upset to expectations. This could potentially cause volatility and movement and hold significant ramifications for Europe more broadly. Trade the opportunity with Pepperstone. 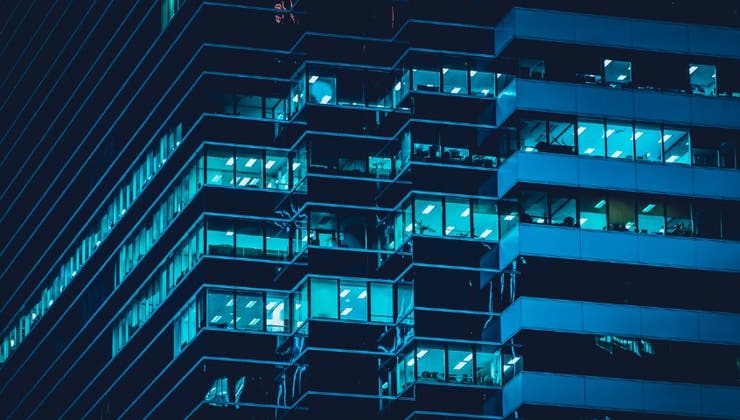 The week ahead traders' playbook