Chris Weston
Head of Research
Share
It’s a tough day at the office for those who are bullish risk, notably equities into the Asian open, with S&P 500 futures sitting down 1.8% from the cash close. By way of a guide, Nikkei 225 futures are 1.2% lower in overnight trade, while Aussie SPI futures are sitting 71-points lower from the ASX 200 cash close. We can also see the China A50 futures lower by 0.7% overnight, so it’s not going to be a particularly pretty picture in Asia.

Our European equity calls are flat and were these markets to open now the move would be limited. That may change depending on how Japan and Hong Kong trade today, given the influence these markets have on the S&P 500, FTSE 100, and Eurex futures through Asia.

Certainly, the flow we’ve seen from this part of the world has been more centred on the GBP, with increased volumes in GBPUSD and EURGBP. GBPJPY has been the mover in G10 though, followed by GBPCHF, with the JPY finding its place as the go-to safe-haven currency.

GBPJPY is working a textbook bear channel. It seems the path of least resistance is lower here as traders re-establish Brexit hedges, and frankly, when I look at two or three-week implied volatility in GBPUSD or any of the GBP crosses, I am surprised to see it hasn’t spiked much. 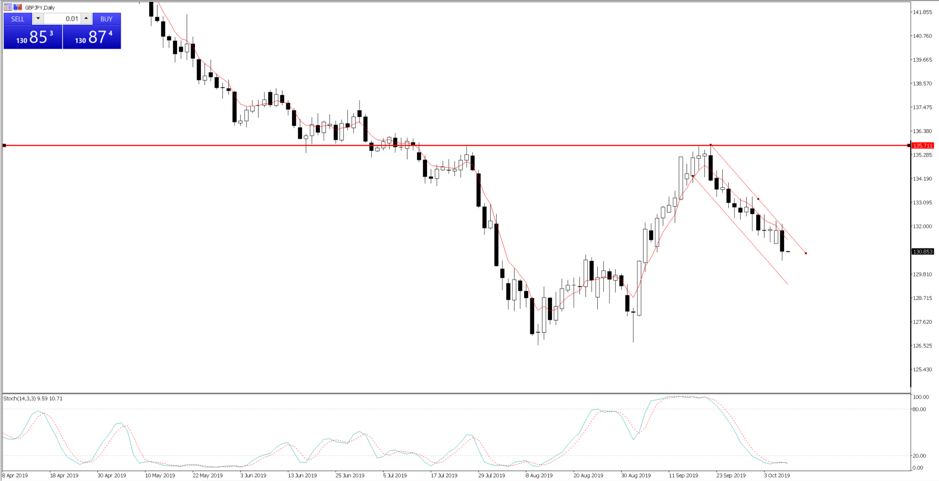 The idea that Johnson’s Brexit deal is “near to collapse”, as one publication put it, following on from a phone conversation between Johnson and Merkel, has brought out GBP sellers. The debate around Northern Ireland, and where this sits in relation to the EU Customs Union, is once again the issue that makes a deal, that is first agreed upon between both parties and then passed through the Commons, such a complicated issue. An extension to Article 50 still seems the more probable outcome, followed by an early election, although we watch for next week's EU Summit for signs the group actually accept an extension.

Outside of Brexit news flow, there has been some anxiety over this week’s US-China trade negotiations, which are due to be cut short by a day after further blacklisting of eight Chinese tech companies. We’re watching out for any retaliation from the Chinese.

The idea of convergence (between the US and China) resulting in a delay to the implementation of tariffs on $250b of Chinese exports is slipping away, it seems. There are a number of other working parts here, including travel restrictions for Chinese officials, although I feel the talk of capital controls are key and will always be taken badly by investors, with reports US government pension funds may be subject to limits in Chinese equities.

USDCNH has been a central focus this week, and it won’t shock that the news flow has seen better buying of this cross into 7.1674, which in turn has seen the China proxies of G10 FX (AUD and NZD) headed lower. As a side note, we get (Aus) Westpac consumer confidence at 10:30 AEDT, and while I think this is a data point that we should continue to watch, it is not an event risk for those holding AUD exposures and unlikely to cause a reaction.

Certainly, the China news flow explains the bid in the JPY, and poor tape in equity markets, with the S&P500 cyclical/defensive ratio trading to the lowest levels since 2016. Small caps underperformed with the Russell 2000 -1.7% vs 1.6% for the S&P 500. Traders have naturally been vol buyers, with the VIX index-tracking back above 20%, while we see a fair bid in US Treasuries, with 2s -4bp and 10s -3bp, although this was partly influenced by poor interest to cover a $38b 3-year auction.

We get FOMC minutes tonight (05:00 AEDT), although they may be somewhat redundant given Fed chair Powell’s speech in late US trade. Powell detailed that the Fed is to announce new Treasury purchases to increase liquidity in the funding markets, although the Fed is keen to point out this is not the same as QE – I’m not so sure the market will see it that way, although risk assets are not getting overly excited about the prospects. We’ve also been treated to insight and a clearer view that the bank is prepared to use unconventional balance sheet tools if required. Notably, here, he is looking at yield curve control, in a similar manner as the BoJ. The broad feel of Powell's speech will enthuse those calling for an October rate cut and the implied probability now sits at 85%, with 35bp of cuts priced by December.

US CPI is due tomorrow, and I will cover off on that in tomorrow’s note, but obviously depending on the outcome relative to consensus (+2.4% YoY), it could move the dial a touch.