Risk FX is flying and we saw the Australian dollar close 2% higher on the day yesterday. AUDUSD advanced from its Monday open at 0.6655 to hit the 0.6800 handle just after rollover this morning, a level not seen since January.

AUDUSD opened firmly on its 200-day MA yesterday and charged above 68 US cents per Australian dollar this morning. The sharp gains in high beta currencies like the AUD come as the world sees a US dollar outflow as global economies reopen - the USD weakness exaggerated by unrest in the US.

Although the AUD is not in the basket of currencies that measures the US dollar index, the USDX also opened yesterday near its 200-day MA and was offered lower from there.

The RBA meet at 14:30 AEST today - will they talk about negative rates? The central bank has been fairly upbeat recently, pushing back against negative rates, and not making any bond purchases in almost four weeks. Governor Lowe has recently pointed to the possibility of a smaller economic downturn than previously expected. Yet there’s a growing conversation that the RBA could implement negative rates within the next 12 months. If the RBA leave the possibility on the table today, that’s modestly AUD-negative.

But the AUD (black line) continues to move in the same direction as the S&P 500 (blue line), both reflecting the increasing risk appetite despite a poor global economic outlook.

S&P 500 (US500) futures slipped this morning as President Trump announced the military will be deployed if states cannot quell protests, and the Aussie dollar followed. But if equity markets can largely shrug off a pandemic, national lockdowns, and a record spike in unemployment, this AUD rally might have legs yet.

Chart of the Day: AUDUSD holds above 64 US cents in risk-on rally

The Australian dollar is riding the waves of a risk-in mood, making a strong 1.37% gain against the USD yesterday and closing above 64 US cents. The soaring AUD mirrors yesterday’s rally in US equities but also reflects that markets see a quicker economic recovery for Australia with lockdown restrictions due to ease soon. 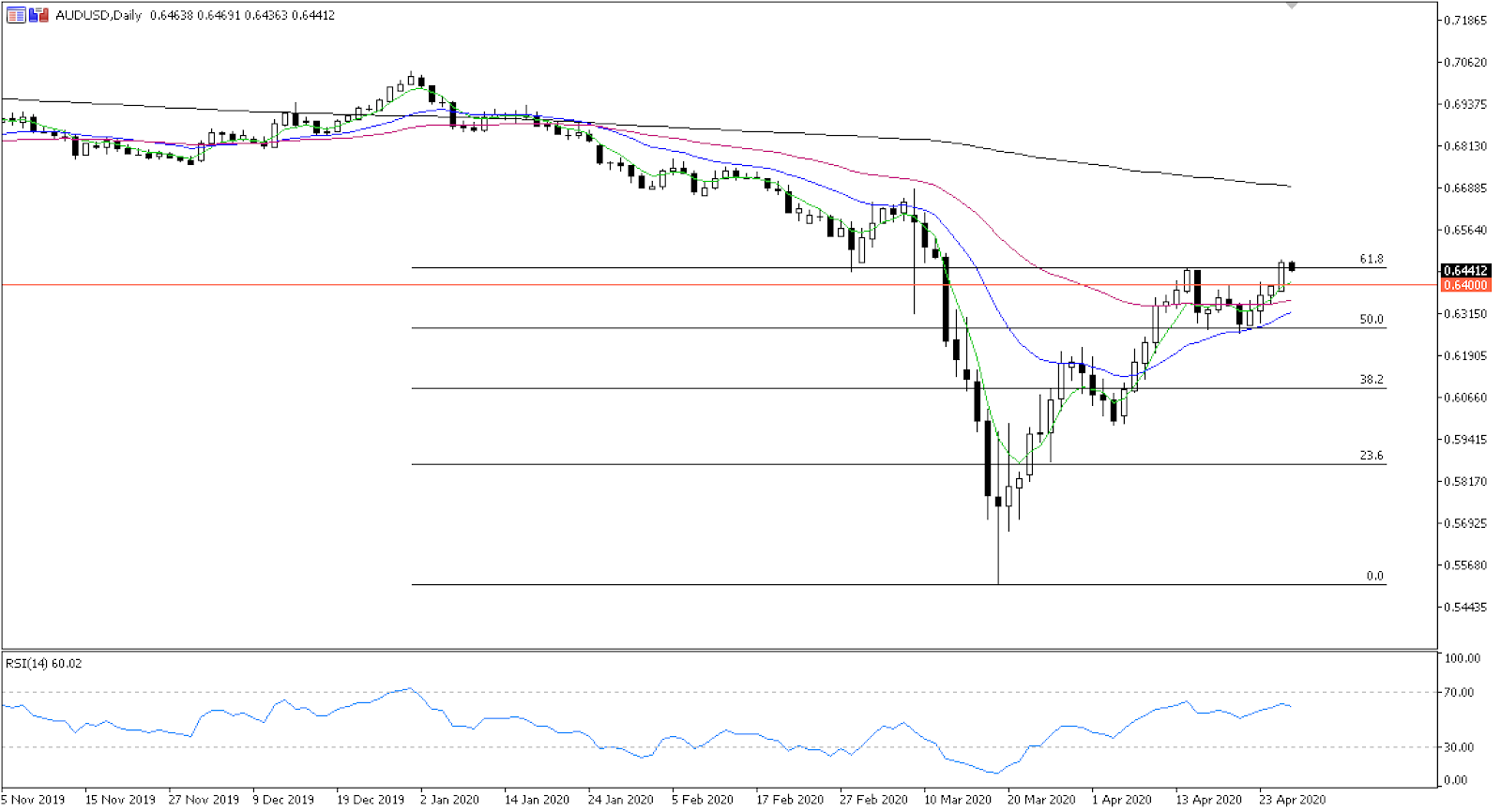 AUDUSD closed at a multi-week high yesterday, buoyed by a rally in US equities. AUDUSD failed to hold above 64 US cents two weeks ago, but a lot has changed since then. Australian states are gradually easing restrictions, including the biggest state NSW, building optimism that a domestic economic recovery could come sooner than expected.

Yesterday’s close came above the 61.8% Fib retracement of the December high to March low. If it can close above this level again today, it’ll be a good sign the Aussie bulls have taken control. I’m also watching the 0.6400 handle and the 5-day EMA (green), currently at 0.64096, a natural support level. Beyond that, AUDUSD was well supported by the 20-day EMA (blue) last week.

The AUD will remain sensitive to risk sentiment. Just as a risk-on mood has driven this rally, a shift to risk-off if global turmoil lifts will drive the Aussie lower.

EURAUD: The pair continues to look bearish as the AUD stages a strong recovery and the EUR makes some choppy sideways movements. EURAUD 50-day and 20-day EMA crossed over yesterday.

GBPAUD: This pair is at a pivotal point: having found support at 1.9195. If the AUD bulls can close below here, there should be room for more GBPAUD downside. Australia is easing pandemic restrictions as the curve flattens while the UK continues to battle high case numbers.

AUDNZD: The kiwi is rising too, but not as fast as the AUD. AUDNZD looks bullish and I’m eyeing a move into 1.0800, a level last seen in November. New Zealand and states in Australia are beginning to slowly lift lockdown restrictions.

Chart of the Day: AUD tumbled after Aussie job reports

AUD slumped to 0.6317 Wednesday on the modest risk aversion after a seven-day losing streak. It tumbled during Asian trading hours despite the better-than-expected employment report.

The unemployment rate has slightly risen to 5.2% in March, up from 5.1% in February, sitting well below 5.4% expectation. Total employment increased by 5,900 against -30k. The participation rate was little changed at 65.9%. Since these figures only captured the data in the first two weeks of March and therefore didn’t reflect the full impact of the shutdowns, AUD failed to find some support and extended the decline.

It’s worth noting that some employees temporarily staying at home without pay are not likely to be considered unemployed by ABS. So the April employment data will offer a full picture of the labour market during the time of lockdown.

The weak opening today following a bearish pattern circled on the daily chart suggests a pause of the recent bullish trend. AUD looks bearish in the short term, with 0.6279 being the initial support, which is the confluence of 10 EMA and ascending trendline since March 19. A break here will bring the pair to challenge 0.6238, the 61.8% fibo level. Should the pair hold above the trendline, the downside risk is limited.

On the upside, the pair needs to break above the descending trendline (0.6480) coming from January to reverse the trend and open the door for 0.6684.

As shown in the chart below, the AUDUSD (blue) has been following S&P 500 futures (white), with the high correlation shown between these two. As the US equities returned to the technical bull market within a short period of time, AUD, a global risk proxy, also followed and surged since late March.

So where the US equity markets go, the AUD will likely follow.

However, a batch of downbeat US economic data released yesterday triggered the risk aversion in the market and dragged the S&P 500 futures lower, heavily weighing on AUD. The irony being poor US data actually supports the USD, given the AUD is a proxy of broad risk appetite.

The economic condition of China is no doubt another key factor for AUD.

The chart below shows the correlation between USDAUD (blue, or AUDUSD inverted ) vs USDCNH (white). It’s easy to find that CNH has a high correlation with AUD, or in other words, a higher USDCNH could weigh on the AUDUSD.

The PBOC yesterday lowered the Medium-term Loan Facility (MLF) rate by 20 bp to 2.95%, putting CNH under pressure especially when we saw the strong USD demands. USDCNH extended the gain to 7.0831 in Asian session. Therefore, AUD reversed the bounce seen following the jobs data and dropped further.

Keep an eye on the upcoming China GDP due Friday, which is expected to drive the AUD. 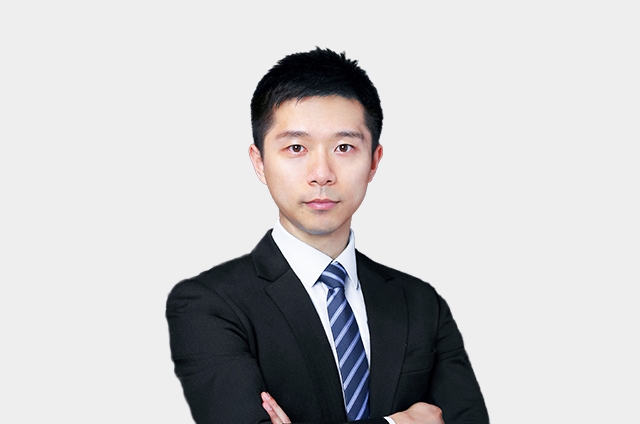