Luke Suddards
Research Strategist
The big event from this week was the Bank of England meeting. Later today we'll get the core PCE read which could cause some movement as we go into the weekend.

The dollar has been choppy this week as traders absorb last week’s hawkish Fed meeting and try to forecast its implications. We had a smattering of Fed speakers this week – some hawkish and some dovish. I picked up an important sentence form Fed Chair Powell this week - price effects have been larger than we expected and they may turn out to be more persistent than we expected. Thoughts like that for me are why we saw the hawkish shift in the Fed dot plot last week. The policy normalization fuse has been lit and the subtle shift in the Fed’s reaction function should be bullish for dollar crosses, particularly so against low yielding funding currencies such as JPY and EUR whose benchmark rates should remain firmly anchored due to historically weak inflation. Manufacturing PMIs came in higher than expected, but missed quite significantly on the services side – so a mixed bag. Initial jobless claims remained basically flat from last week coming in at 411k compared to the 380k expectations and final estimate of GDP was in line with forecasts. If PCE inflation data out today, records another strong print we could see the market price in more tightening and see the dollar take another leg higher. Positioning data from last week showed another increase in net short positioning for the greenback, making it the largest position against the dollar in 3 months. This clearly provides a tailwind for the dollar on the basis of a short squeeze. Next week on the 2 July sees us receive the next set of employment numbers (Non-Farm Payroll). A chunky number will keep the normalization of Fed monetary policy theme alive. 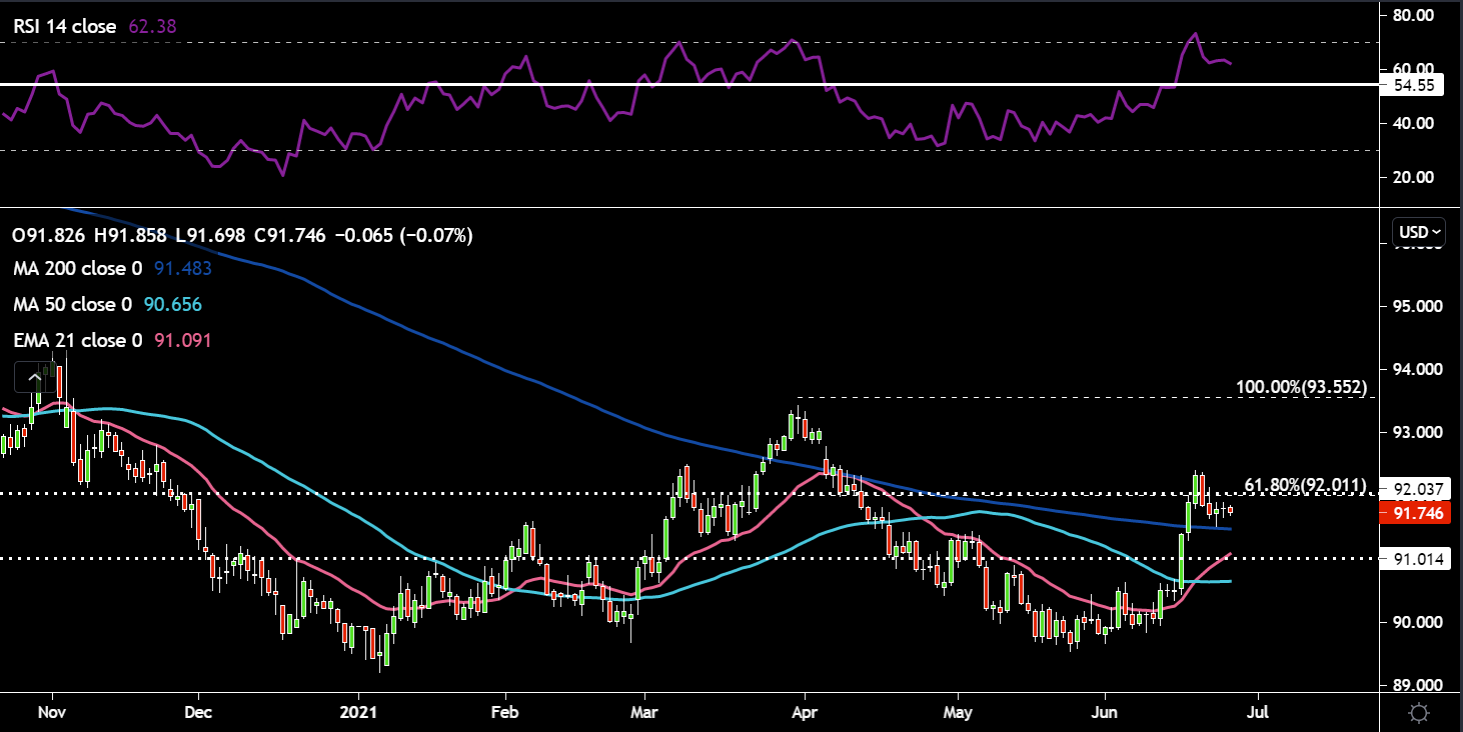 Price is currently sandwiched between the 92 horizontal resistance (which happens to be the 61.8% Fibonacci level too) and the 200-day SMA. While price remains above this long term moving average the bias towards price direction is upwards. The RSI has come off a bit from overbought territory and still remains above the key 54.55 level. The 21-day EMA is still above the 50-day SMA since it crossed and pointing vertically. On downside moves through the 200-day SMA, I’d monitor the 21-day EMA, which comes in at 91 support too. To the upside, positive moves would be through 92 then the 18 June high of 92.405.

EURUSD hasn’t done much this week since it’s strong move on Monday. We heard from the ECB's Kazimir who stated the ECB does not see a reason to change loose monetary policy setting at the moment, reminding us that dovishness from the ECB is entrenched firmly in their decision making. We also heard from Germany’s Health Minister Spahn who warned the delta variant may cause a 4th wave of infections around Autumn and Winter. Euro area PMIs showed beats across the board and German Ifo surveys were strong and above consensus. German GfK consumer confidence came in much better than expected too. Despite these positive dynamics the euro is still taking a back seat to Fed inspired dollar moves. 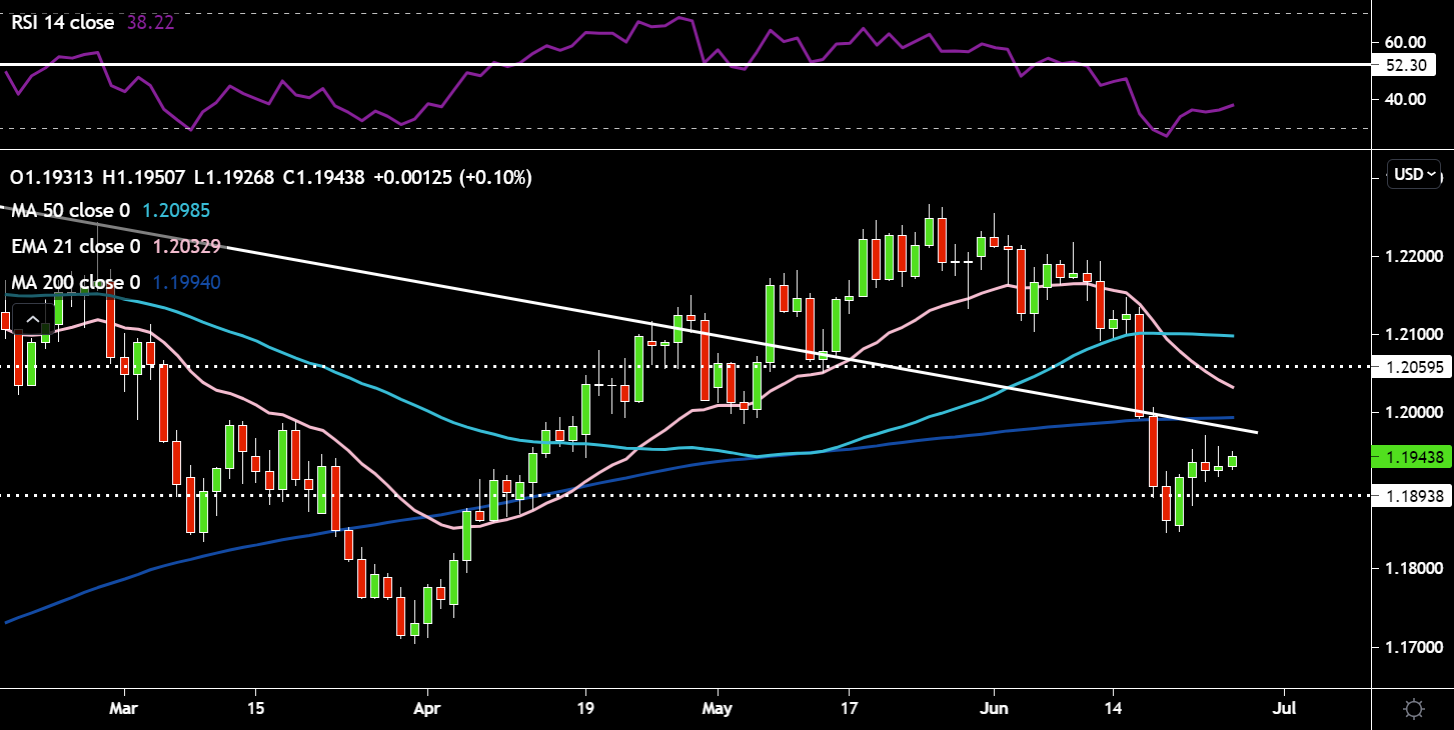 EURUSD remains sandwiched between the 1.19 horizontal support and the 200-day SMA just below 1.20. The downtrend line just below the 200-day SMA could cap further gains too. The RSI has moved out from oversold, but has now flatlined sideways indicative of the choppy price action we’ve been seeing. While price remains below the 200-day SMA, my bias is to look at fading rallies higher. 1.195/1.20 could be potential zones for such a strategy.

Cable closed lower yesterday by around 50 pips on the back of the BoE meeting. The meeting wasn’t particularly dovish (Q2 GDP upgraded by 1.25% and inflation to 3%), I suspect it was more a rebalancing in positioning of some hawkish traders who were expecting a bit more - such as Andy Haldane’s views pushing others to dissent on the asset purchase front. Uncertainty over the unwinding of the furlough scheme as well as the durability of inflation would have kept the BoE from taking more decisive hawkish steps. Daily covid cases are on the rise and yesterday saw 16 703 people testing positive, however, over 60% of the adult population has now been fully vaccinated which should stop severe symptoms and more importantly hospitalizations. Roll on July 19! PMI data was mixed with misses in the composite number and services, but a beat on the manufacturing side of things. More relevant to EURGBP, but a mini trade war has been averted for now as the EU decided to extend the grace period on chilled meats moving from GB to NI. It’s not clear yet whether the extension would be for three or six months. This is a temporary respite in my opinion as the NI Protocol in its current form is not sustainable. 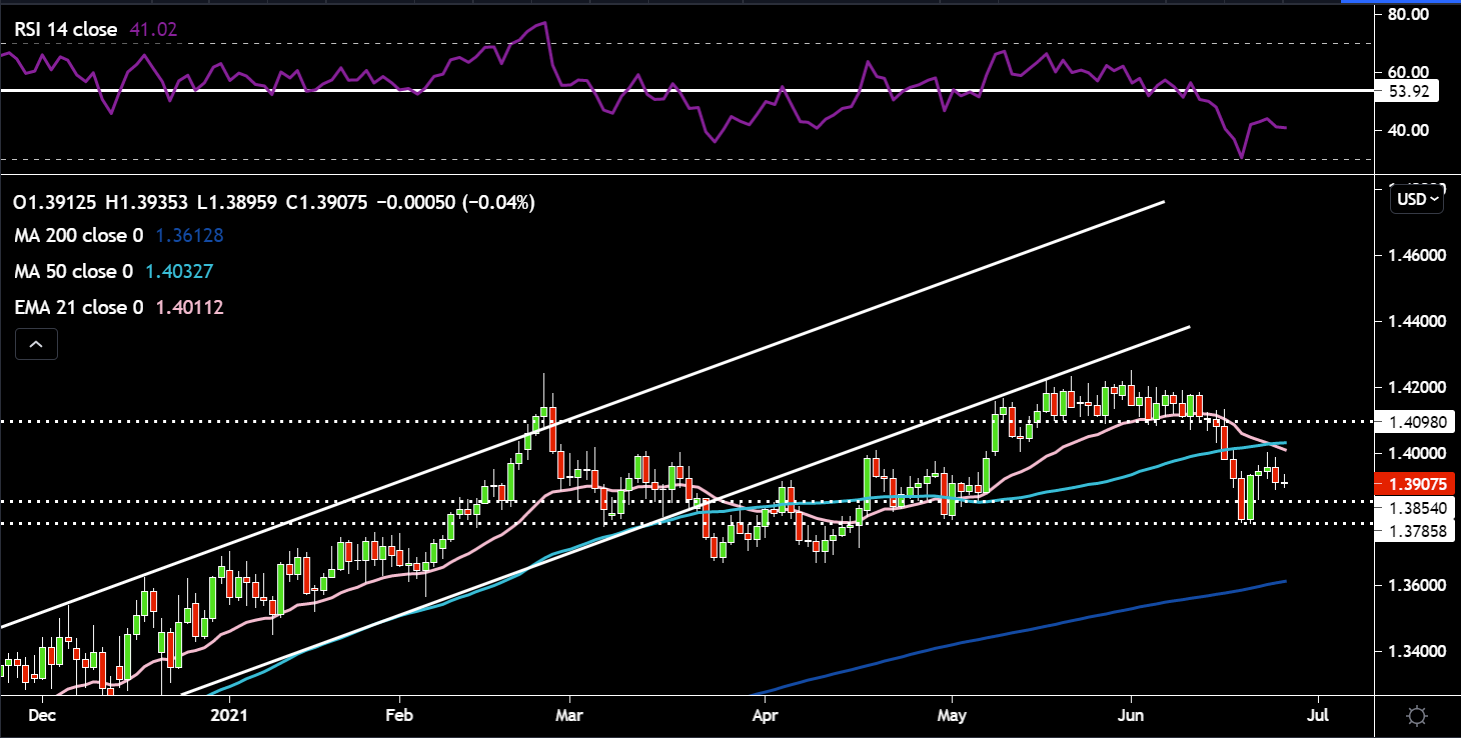 After the positioning unwind Cable now finds itself hovering just above the 1.385/1.39 support. The 21-day EMA has now crossed below the 50-day SMA (short term bearish). The RSI had risen quite far from oversold, but has now rolled over a tad around the 40 area. While price remains above its 200-day SMA, there is still some hope for GBP bulls. On the upside monitor 1.40-403 and on the downside keep an eye on 1.385 and 1.378.

I have been impressed with the moves higher in this cross despite a stagnant US-10 year which usually drives this crosses direction. Technically, price suffered some high altitude sickness around the 111 area as it ran into the upper trend line of the ascending channel and horizontal resistance. The RSI has turned lower ever so slightly as it bumps up against the 65 resistance. Still see this cross as ripe for a buy the dips strategy with pullbacks towards the 21-day EMA being a potential trigger point.

Gold is struggling to find its feet as it remains rangebound post the hawkish FOMC selloff. US 10-year real yields are marching higher and to me now with the Fed’s latest move the direction is skewed to the upside which won’t do the yellow metal any favours. That feeds through into a stronger dollar, which adds to the list of headwinds. Today’s core PCE inflation print may help gold, but it could also lead to a further tightening in rates by the market which may pressure gold lower.

Looking at the charts, gold is bumbling along the 61.8% Fibonacci level. The 21-day EMA has crossed below both the 50-day and 200-day SMA. The 50-day SMA is ever so slightly above the 200-day SMA, but I’d be careful trying to draw too much from that given how close it is. The RSI is rising from oversold and heading in the right direction. An initial upside price target would be $1800 resistance and to the downside through the Fibonacci level $1750 support would peak my interest.

Crude continues its ascend higher and has had a stream of positive news flow over the week. Firstly, US inventory data showed a larger than expected drawdown (5th week of drawdowns). Secondly, OPEC+ sources believe 500k bbl/d will be the amount coming back online at next week’s July 1 meeting, less than the 1 mln bbl/d expected. Thirdly, Iran US Nuclear talks have not concluded and news on this front has been sparse. Biden’s team are keen to wrap things up before a new hardliner President takes office in August who could make sealing a deal tougher. Lastly, the futures curve shape shows a steep backwardation indicative of tight supplies. Goldman estimates there is a deficit of around 3 mln bbl/d. 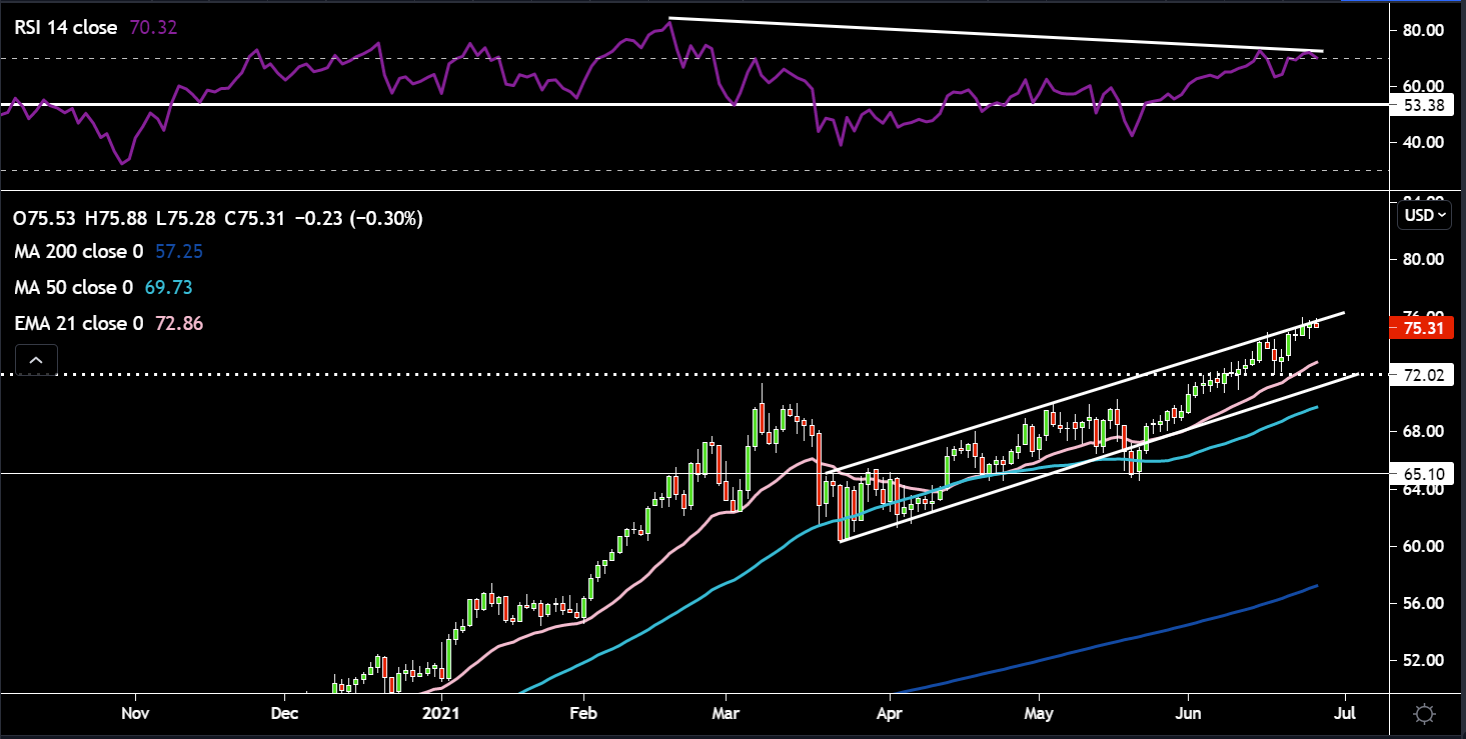 Price is still moving nicely within its ascending channel, it actually peaked its head slightly above the upper trendline of the channel at $76. There is support around the $72 level and backed up by the 21-day EMA which provides further support. These levels will need to be held for bullish momentum to continue with the lower trend line of the ascending channel being the line in the sand. My only concern technically is the negative divergence appearing on the RSI as price made higher highs, the RSI made lower highs indicating weaker momentum on oil’s push higher, especially as we hover within overbought territory. Upside target would be around $80 and on the downside I'd be monitoring the $72 zone.

News flow hasn’t been quiet for the digital currency as price remains trapped in a range between $31k and $41k. China still has bitcoin by the throat as it attempts to clamp down on all things bitcoin within its territory. Musk continues to troll crypto traders with a colourful assortment of tweets. 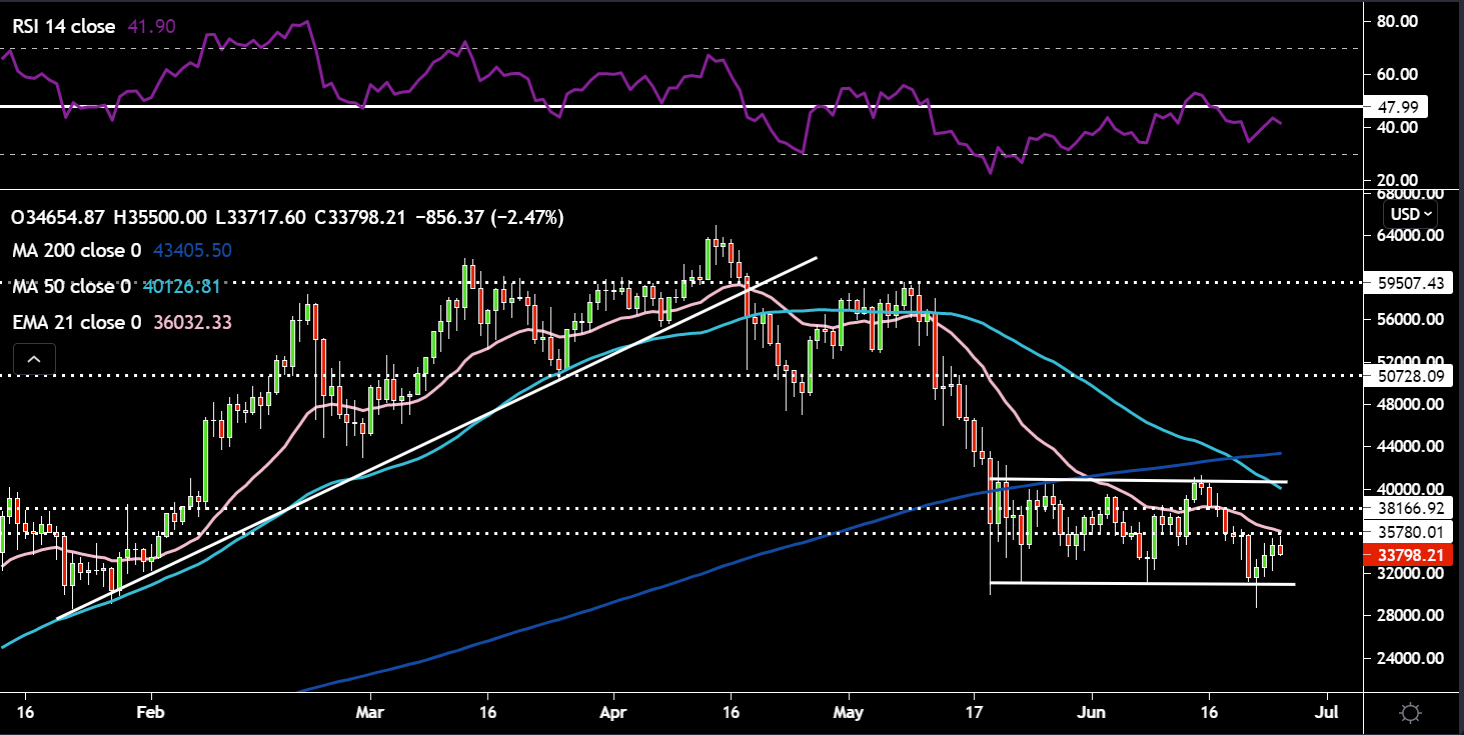 Price has bounced off $31k support and rallied into horizontal resistance around $35k as well as the 21-day EMA. Speaking of moving averages the 50-day SMA has crossed below the 200-day SMA, making the dreaded death cross. The RSI tried to rally to the 48 resistance level but fell short and has now retreated. On downside moves monitor the $31k support and to the upside price needs to first break through the $35.8 resistance and the 21-day EMA before it can move higher from there. 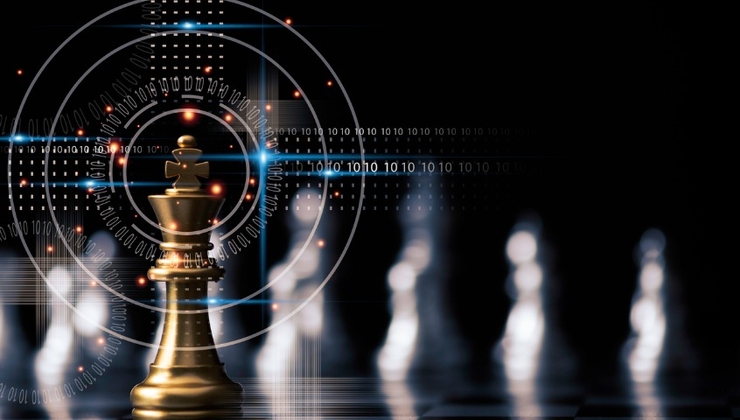 Gold and Crypto shaping up for a more explosive move 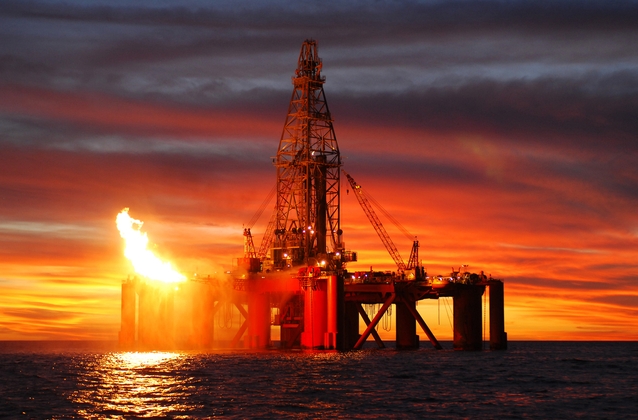