Luke Suddards
Research Strategist
It's been a fairly lively week with Central Banks helping to cause some FX volatility for us traders. Let's take a look below.

The rangebound behaviour we’ve seen in the greenback this week has had two main drivers. We saw a strong response from the dollar as a much higher than expected inflation print came through the wires on Tuesday, which lead to more tightening of monetary policy expectations. However, those gains were erased the next day when Jerome Powell’s prepared remarks were released ahead of his testimony before the House Financial Services Committee and the doves licked their lips. In essence, he said that the U.S. economic recovery hasn’t progressed enough to begin reducing asset purchases (not anything new). This sent yields lower which placed selling pressure on the dollar. Jobs data out yesterday had a positive spin with initial claims printing in line and continuing claims coming in better than expectations. Industrial production figures were a tad weaker than expected. Later today we’ll get an update on retail sales figures for the month of June and Michigan consumer sentiment and inflation expectations into the weekend. Dollar shorts were trimmed again with the bulk of this coming from the euro, CAD and the Aussie dollar. 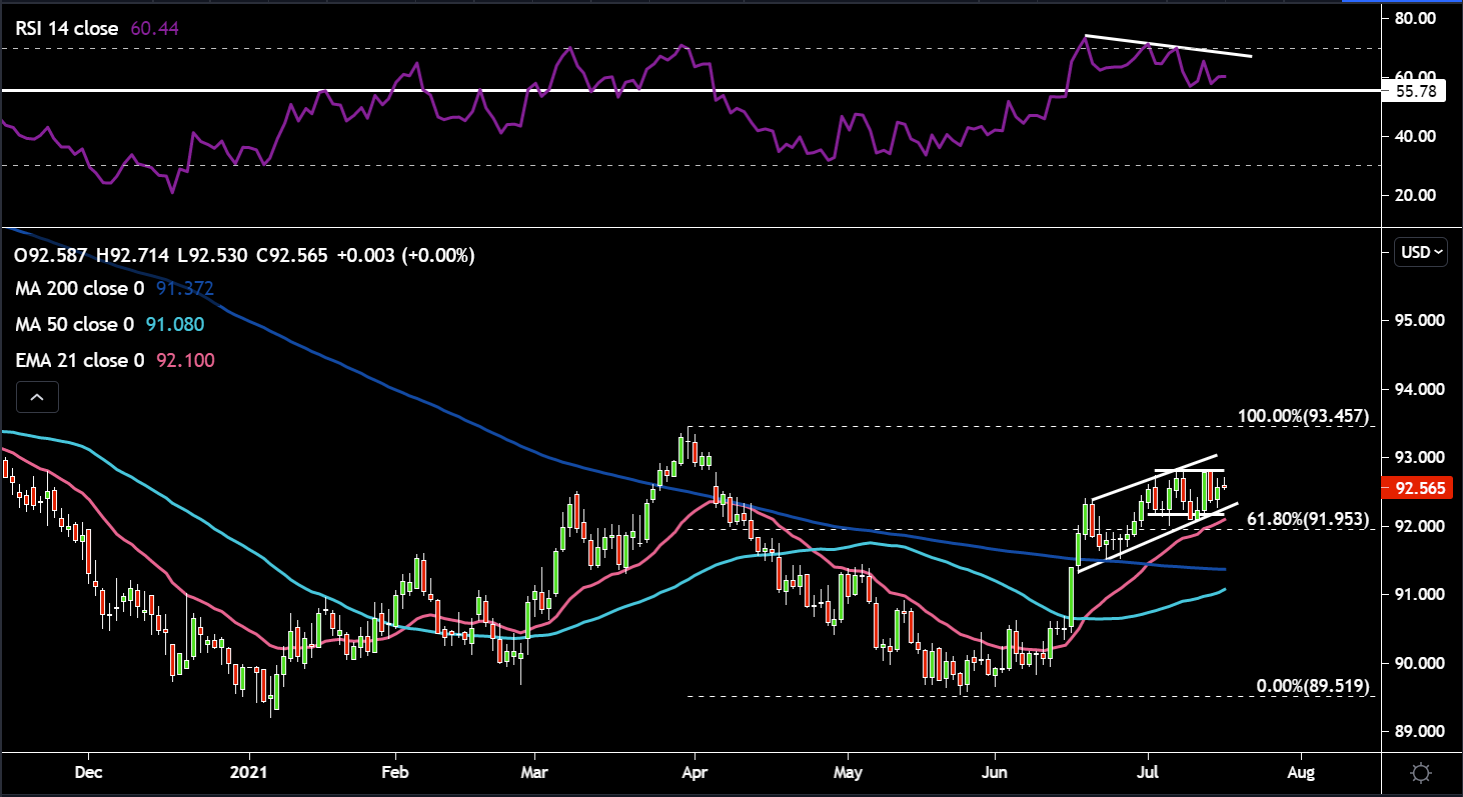 Although the dollar is still continuing to move nicely within its mini ascending channel, the last 2 weeks has seen a range develop between 92.18 and 92.8. Price is now currently towards the top of the range. There is some decent support on pullbacks in the form of the uptrend line and 21-day EMA. I’m keeping an eye on the 50-day SMA which is now looking close to making a golden cross with the 200-day SMA. This would add to my bullish outlook on the greenback. My only bugbear really is the negative divergence on the RSI, indicating buying momentum isn’t as strong on consecutive price highs. In terms of targets, on the upside the 31 March high of 93.43 would be a good reference point. On the downside, I’d be eyeing the 21-day EMA, trend line and range support around 92.

Nothing specific for the single currency arose this week with its direction being dictated by what happens across the pond. The medium-term bearish outlook remains in play as central bank divergence between the ECB and Fed will continue to be a key theme for EURUSD, with the Fed much closer to policy normalization than the ECB. Speaking of the ECB we have a meeting next week Thursday from them which I’ll be writing a preview for. On the economic data front, there wasn’t much to contend with – industrial production disappointed slightly, while later today we’ll get the final inflation estimate for the euro area. EUR net longs were trimmed by about $1.5 bln over last week. 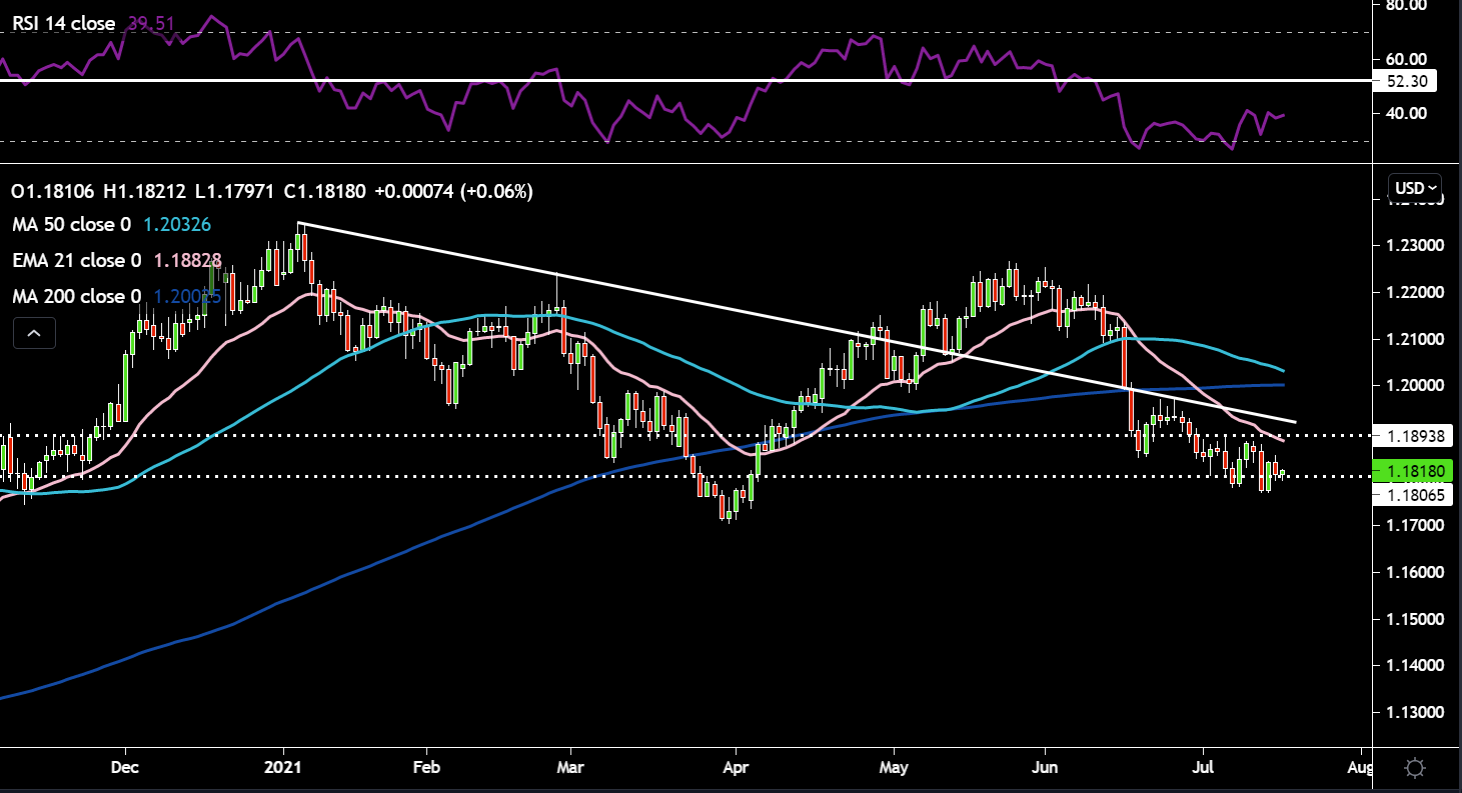 EURUSD is trying with all its might to hold the 1.18 level. The 21-day EMA will continue to provide dynamic resistance to any rallies on the upside, and the 50-day SMA is looking close to making a death cross with the 200-day SMA if price continues its current direction of travel. The RSI is around 39 signifying that price is still in a downtrend. Targets would be March 31 low of 1.17 on the downside and 1.19 resistance on the upside (just above 21-day EMA).

The most notable development for sterling this week was hawkish commentary by Bank of England Deputy Governor Ramsden and External Member Saunders. Ramsden pointed out that the BoE might ease off on the monetary stimulus sooner than expected due to inflationary pressures. On Wednesday, we saw some of those inflationary pressures as numbers beat solidly on both a core and headline basis. Michael Saunders, who many classify as a dove has shifted to a more hawkish view by echoing Ramsden in seeing a case for removing stimulus sooner rather than later. Suggesting as soon as in the next month or two. This could make August’s meeting a flashpoint for sterling crosses with potentially some members voting to end QE, added to this we also get updated economic projections. Money markets have now increased their UK rate hike bets, pricing in an additional 18 bps by June 2022. Employment numbers out yesterday increased by less than expected with the effects of furlough still likely causing some distortion. Wage growth did come in slightly above expectations feeding through into the narrative of punchier inflation prints. 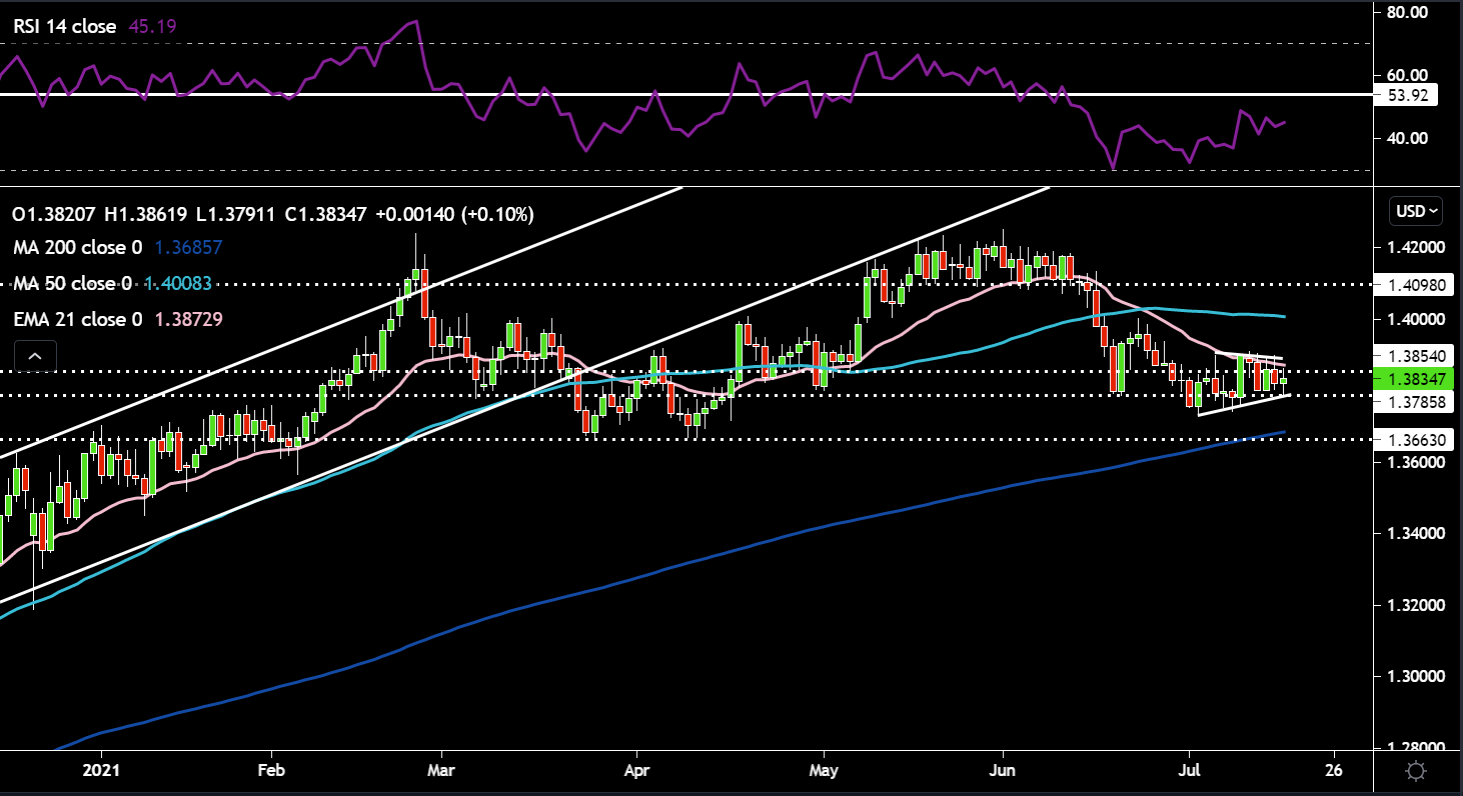 Price has managed to form a mini triangle pattern, with a breakout to the upside looking on the cards. The RSI is moving in the right direction taking a run at the 53 level. The 21-day EMA is acting as resistance and will need to be cleared for further upside gains. 1.395 would be the target if it was. On the downside, major support next comes in at 1.366 around the 200-day SMA and double bottom seen in March/April.

This cross has seen some selling pressure on the back of Powell’s dovish remarks regarding tapering as mentioned above, which has allowed US 10-year yields to continue their Southern direction. As of writing we’re above 1.3% and the 200-day SMA which will be crucial to this currency pair going forward. Price is holding onto the 50-day SMA support and being capped for now by the 21-day EMA. The RSI briefly dipped below the 46 support level but has now perched its head above it once again. For bulls price needs to get back into the channel and above its shorter moving average 21-day EMA. 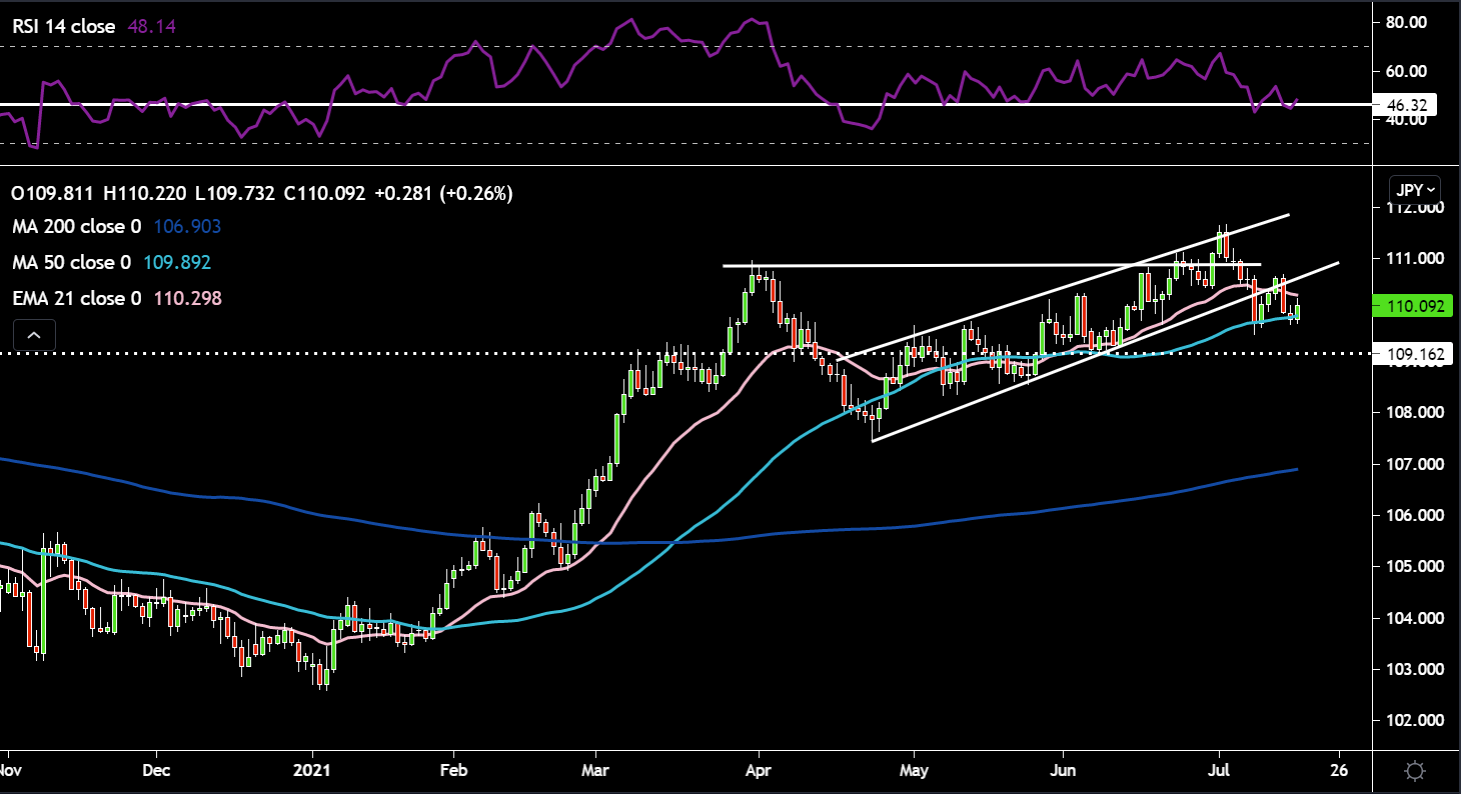 I don’t usually discuss this cross, but after what we saw from the RBNZ this week I thought some digital ink could be spared. The RBNZ surprised FX traders with the announcement that they plan to end their QE programme as soon as July 23, which tees up a rate hike before 2021 comes to an end. Inflation for Q2 beat consensus estimates with ease and will now cause markets to price in a higher probability of a rate hike arriving in August. This is applying downside pressure to AUDNZD given the RBA is guiding for no rate hikes until 2024 currently, thus creating a monetary policy divergence between the RBNZ and RBA. 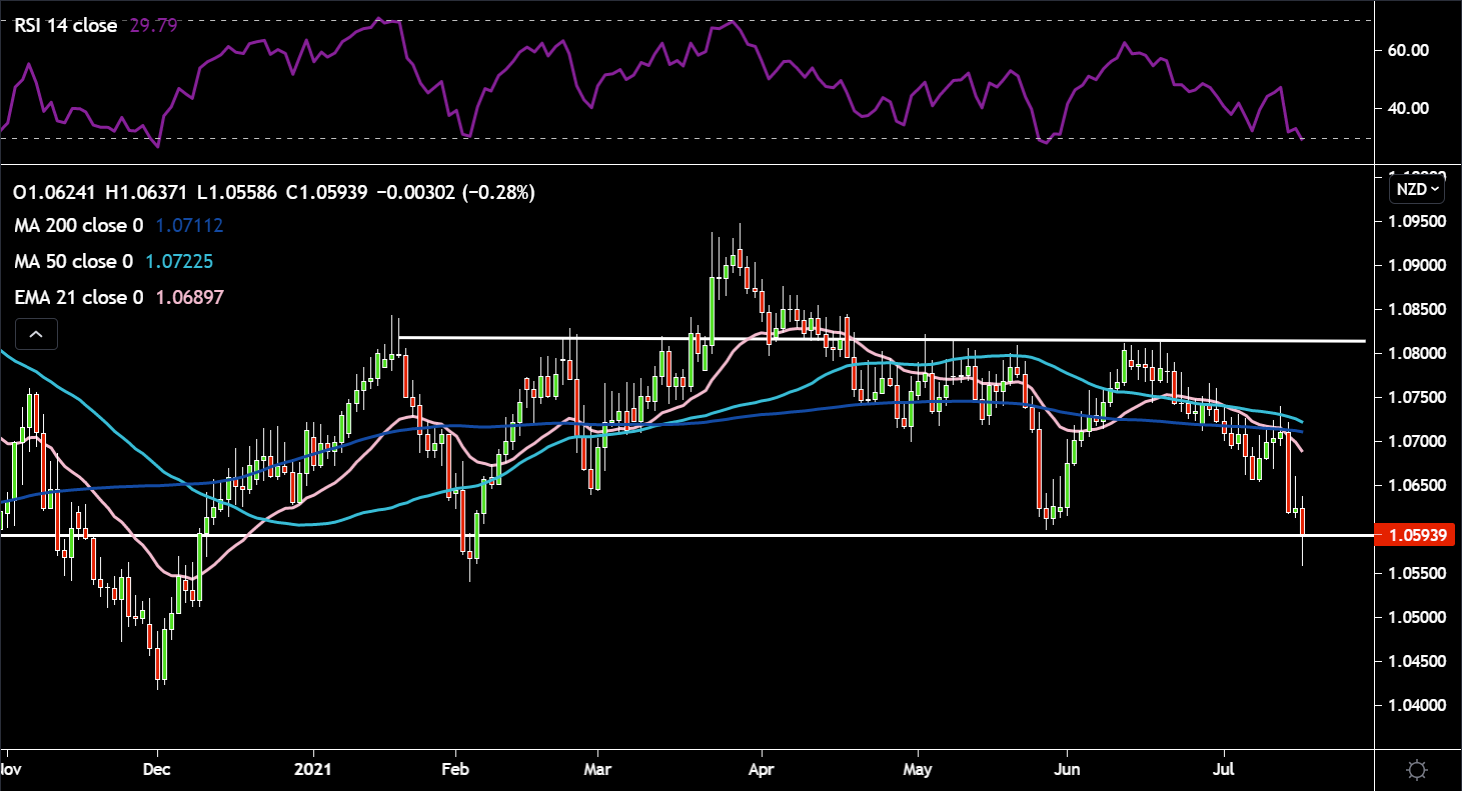 The price lows got below the large range support we’ve seen in place around 1.059. The 50-day SMA looks close to making a death cross with the 200-day SMA, however, I’d warrant some caution as the price candles have made some big moves already and we’re at oversold territory on the RSI, which could see a little bounce higher off support. If the breach below range support is sustained, I expect the 1 December lows of 1.041 to come into view. Think this one remains a short the rallies candidate.

With gold being an inflation hedge some would think we would have seen more bullish price action after the big inflation beat state side, however, it lead to more tightening of monetary policy expectations and helped the dollar push higher keeping the yellow metal subdued. Jerome Powell, however, threw gold bulls a bone when his prepared remarks were released ahead of his testimony before the House Financial Services Committee. In essence, he said that the U.S. economic recovery hasn’t progressed enough to begin reducing asset purchases. This sent both nominal and real yields lower (gold - yield less asset) as well as driving the greenback into the red. These two factors provide rocket fuel for assets like gold. Maybe Michigan inflation expectations out later today could help gold close strong into the weekend, but it may also cause weakness as the monetary tightening expectations could prove a more dominant effect as we saw earlier in the week. 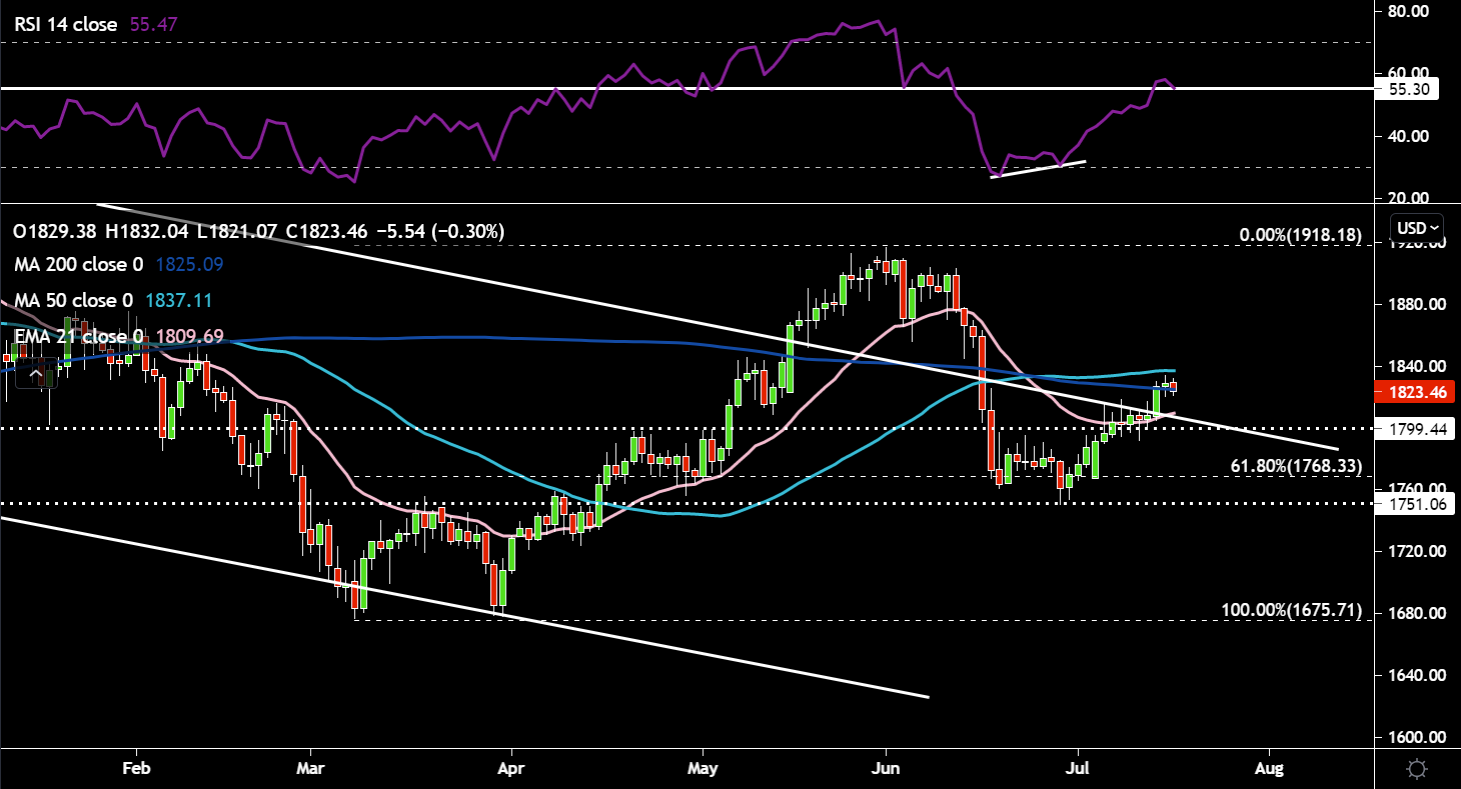 The black liquid was in the red by almost 1.75% on Thursday due to uncertainty regarding OPEC+ and a stronger dollar. Reports emerged that Saudi Arabia and UAE are close to reaching some sort of agreement, with whispers that it’d involve a higher quota for the Emiratis from May 2022 (3.168 mln bbls/d to 3.65 mln bbls/d according to Reuters). However, this could make other countries begin to ask for baseline increases such as Iraq as Iraqi sources intimate. This would clearly see a larger rise in supply and be a tad bearish for crude. Inventory data out from the US showed its 8 consecutive weekly drawdown with official data pointing to a larger than expected drop in inventory. There has been no further news on the US Iran nuclear talks. 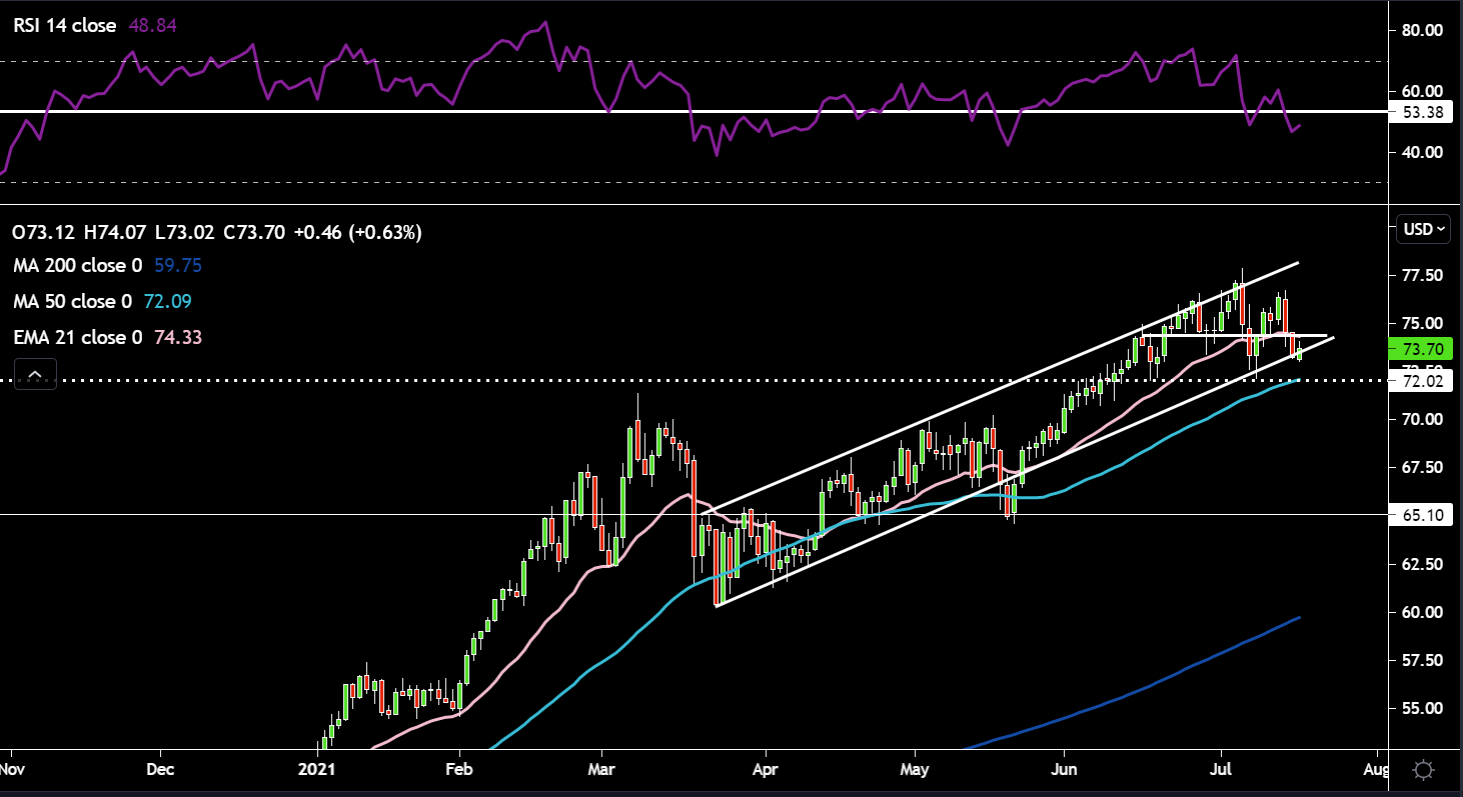 Oil is clinging to the lower trend line of the ascending channel with horizontal support and the 50-day SMA slightly below that around $72. There is some positive reverse divergence presenting on the charts as price makes higher lows and the RSI makes lower lows, usually a bullish sign. The $75 resistance and 21-day EMA would need to be cleared first before bullish price action can continue. A move back above the 53 level on the RSI would also be positive.

Bitcoin has been drifting lower this week. Some point to this as a result of central banks turning up the volume on talk about their own digital currencies which could be creating fear of competition, thus weighing on Bitcoin’s price. We also heard from bond king, Jeff Gundlach who stated he would not own crypto personally. Other than that there is no fundamental news flow to report on. 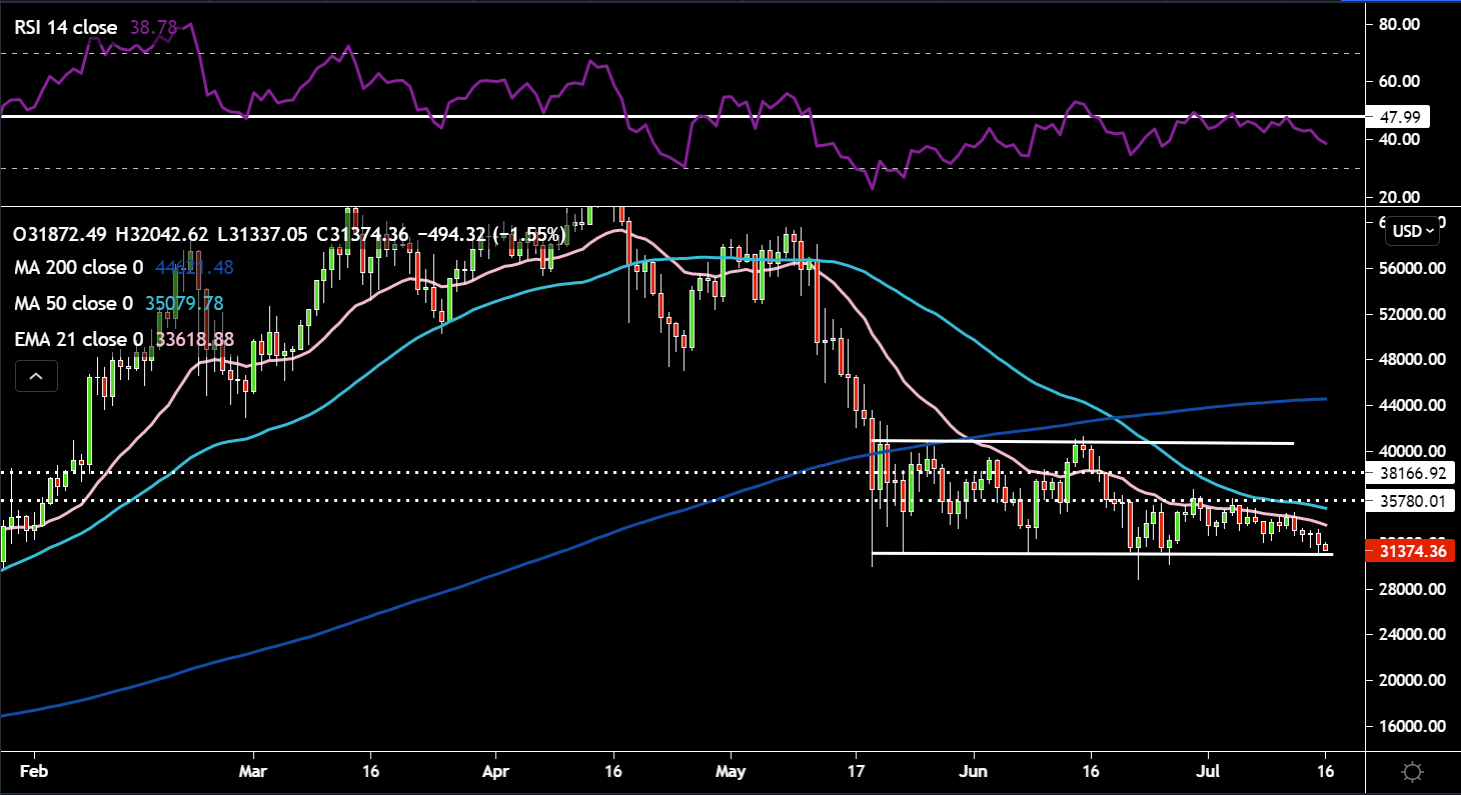 Bitcoin is testing its range support at $31k and if it loses that level it could see price tumble further towards $25k. Unless we get a positive catalyst, the 21-day EMA and 50-day SMA will work to cap upside moves. This must be some of the lowest volatility I’ve seen in bitcoin for a while. On the upside moves toward $35k warrant attention. The RSI remains below the 48 resistance level too adding to the bearish tilt. 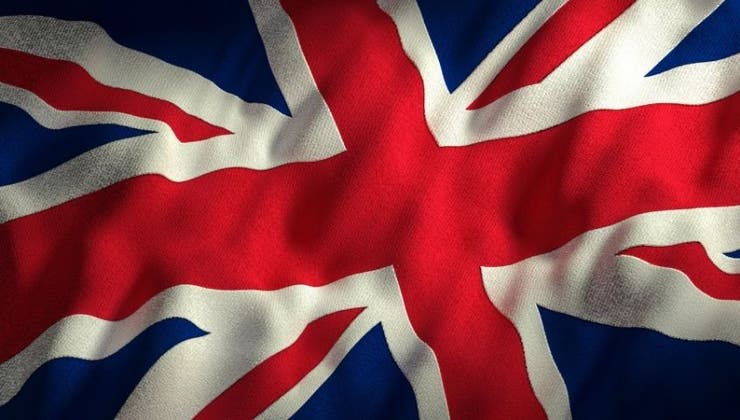 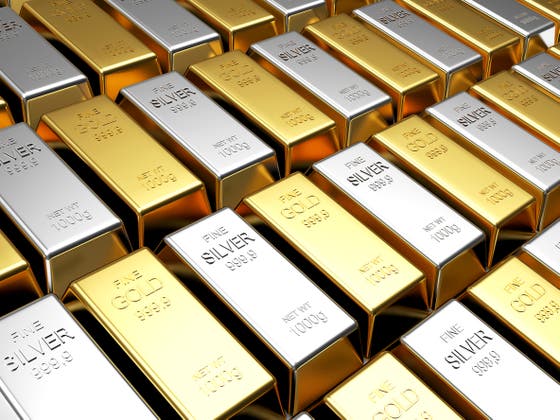 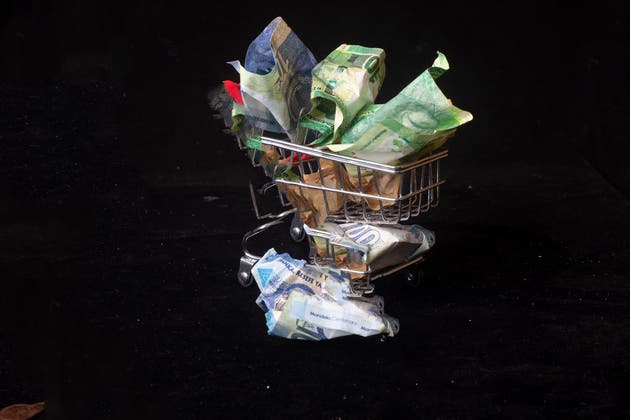