Homepage/Is the party over for Tesla bulls?/
Tesla

Is the party over for Tesla bulls?

Chris Weston
Head of Research
It’s been the trade that just keeps on giving and clients have been long and strong for weeks in this trade.

The fact is Tesla has rallied 88% since finding form from the 17 August lows, in the process seeing its market cap lift from $666b to $1.22t – taking it to the fifth-biggest market cap in the S&P 500.

The lift in market cap has seen a sizeable shift in buying from passive funds and ETFs. There's also been huge option activity – Tesla has been an options monster and currently, we can see an incredible 7.04m contracts in open interest in both call and put options – for those who thought the retail trader was going quiet needs to see the activity in the options space alone. As price has pushed higher, dealers (who sold the calls) have been short gamma and would have been dynamically hedging into $1220 – whereas soon as price pushed through the strike of the option, dealers were buying the underlying shares – again, this perpetuated the move higher. 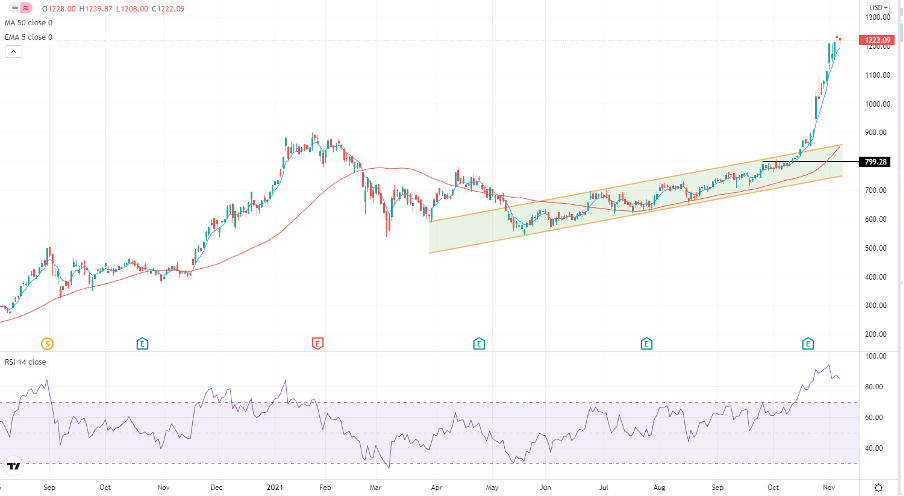 Of course, this type of activity can wildly distort price from any fundamental value and this is why Tesla has been so popular from retail traders. Because, like Crypto when it goes and the body of capital aggregates as one it can cause incredibly powerful one-sided moves.

News that Elon Musk had taken to Twitter to see their view on selling 10% of his holding, equating to some $21 billion, has been all the talk over the past 24 hours. Granted, this is an odd manner in which to go about part selling down one’s stock, but shareholders are somewhat desensitised to the fairly radical actions of Musk.

There's many ways to look at this – There are reports that Musk faces a $15b tax bill, so this sale will clear this. The cynics will claim this is a clever way of offloading some of his position after an incredible run. While using social media to mount a defence against the Democrats plans to introduce a tax on billionaires with unrealised gains. They'll claim it skirts the reasonability of maximising shareholder value.

Others will point to the fact he takes no salary and that this is a non-story, and in a way, he's doing the right thing to help the US government.

A seller in size creates overhang

Whichever way you want to slice and dice, these issues should concern traders little – the bigger issue is the fact that if Musk is true to his word and follows his brother's lead in offloading a decent position, we know there is a known seller in size in the market.

$21b is around 80% of the average daily volume over the past 3 months - so in any normal market, the liquidity in Tesla would have seen his agent work the order fairly conformably over a number of days without causing a major volatility scare. However, providing Musk is to sell down 10% of his stake, which of course wont happen at once, it should keep the buyers at bay and the one-sided order book could exasperate the moves lower. Short sellers love this condition.

Tesla is a momentum juggernaut

All that said, many have mentioned that buyers will be lining up to buy dips, especially if the sales has no reflection of the company but for his own tax liabilities. That may be so, but I’d argue we are likely to see choppy conditions once price has settled down with more prosperous conditions for two-way trading (long and short).

In fact, if options buying spurred life into the rally, then perhaps, we may see the aggressive put buying activity from funds also aggravate the move lower in the near term.

The point is, Tesla is driven by flow – Of course fundamentals have some bearing and the concept of Tesla’s place in the EV space into 2030. But near-term the best way to think of Tesla is a momentum beast – where strength begets strength and the trade is to buy high and sell higher – however, this can obviously work both ways. Having an open mind to the price action, trend and flow are key. Trade the momentum, align with the trend.