BoE Meeting under a cloud of uncertainty

A testy time for the BoE. Take a read below to find out more.

The Bank of England decision on Thursday is likely being overshadowed by the FOMC the evening before (GMT). The market as well as myself are expecting a 25bps lift in the bank rate (8-1 vote with Tenreyro the potential hold out). There is an outside chance for 50bps as we saw 4 dissents for such a move at the previous meeting, but I’d be shocked if this was to occur. The global growth profile is looking very different to what it was back then. A 50bps hike would also bring rates to the threshold necessary to trigger active Gilt sales. I think given the current backdrop that would be too hawkish. Additionally, some MPC members voiced concerns that if they move too hawkishly it could lead to even more aggressive rates pricing (already at 2% for December 2022). The UK forward OIS curve is the most inverted in the G10 FX space - another sign the market is way ahead of itself in terms of pricing in my opinion. Lastly, I wonder if we’ll see the BoE tinker with their forward guidance and dilute it down slightly to provide themselves more flexibility in the face of the very unpredictable environment.

The labour market remains tight with fresh data out on Tuesday showing the unemployment rate falling to 3.9% Average earnings excl. bonus beat expectations and printed at 3.8%. Inflation numbers from January indicated that inflation is already almost 3 times the BoE’s target of 2%. It’s expected to move even higher when the energy cap is lifted in April, potentially peaking at 8%. The BoE have made it clear they’re concerned about second round effects and inflation expectations becoming unanchored. Central Banks in general have all allowed the inflation genie to be let out the bottle and are now trying to wrestle with more persistent price pressures than originally envisaged. Their credibility is on the line here. The BoE are likely to continue with a few more front-loaded hikes and then take a breather to assess how the economy is absorbing tighter fiscal and monetary policy as well as higher energy prices.

Cable has bounced off a key level of psychological support around 1.30. The RSI has made some very minor divergence and is moving out over oversold territory. Levels I’d be watching for a further push higher would be the 23.6% Fibonacci at 1.314 with the horizontal resistance just shy of 1.32 slightly above there. On the downside, the swing low at 1.30 will be key for the bulls. 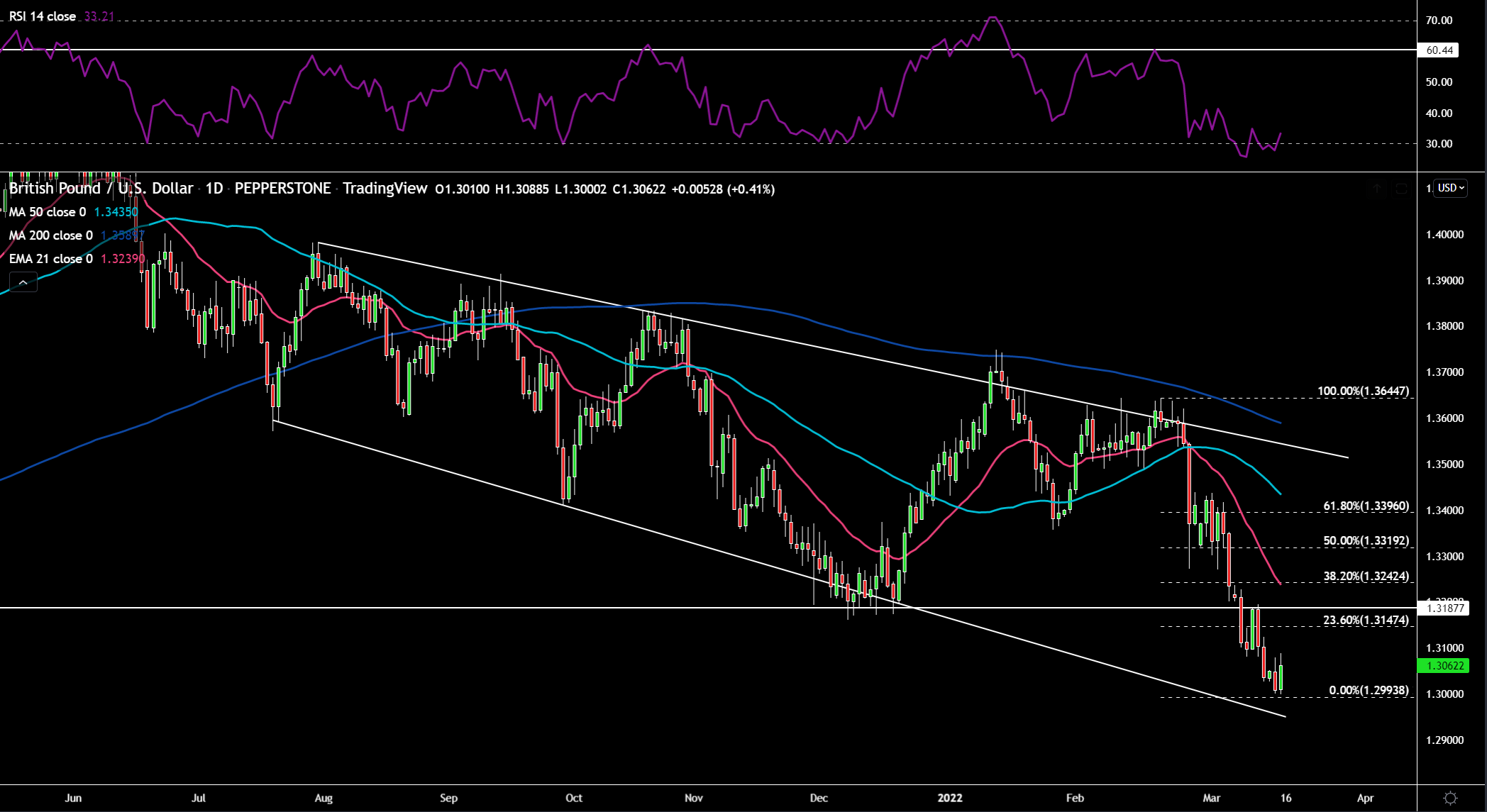 EURGBP has rallied hard, almost tagging its 200-day SMA. Price has been sold down from the 0.845 level and is now slightly below another key resistance support dividing line at 0.84. On the downside, watch the 50-day SMA and 21-day EMA around 0.835. The RSI could still pusher if price was to move back up as we’re still some way from the 63.68 level which capped price rallies previously. 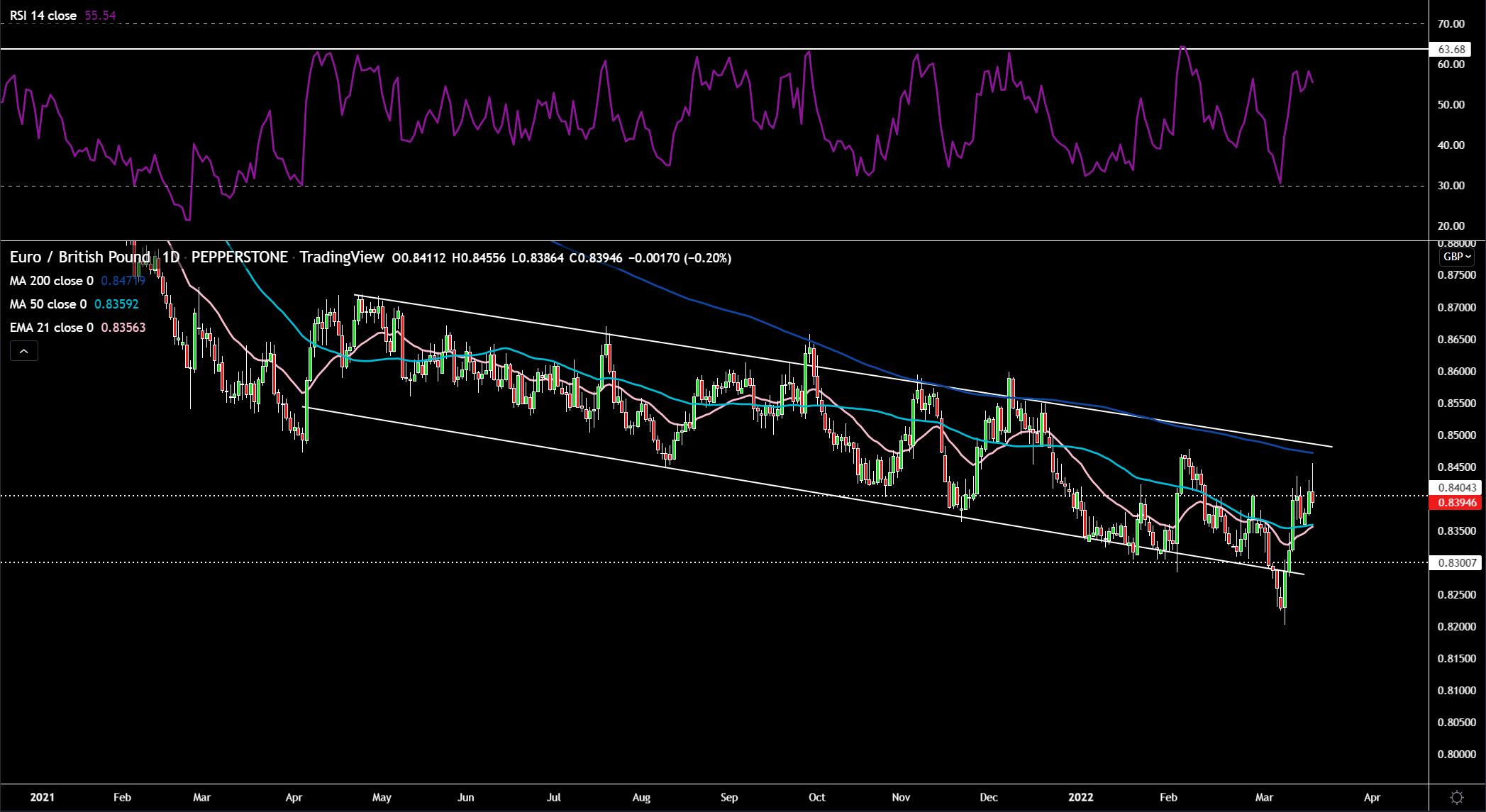