/A traders' week ahead playbook - Movers and shakers/
USDFED

A traders' week ahead playbook - Movers and shakers

We head into the new week with risky assets getting smacked on Friday and we look for Asian equity to open 1% to 1.5% lower. Powell’s speech at Jackson Hole was well noted in just how brief it was and designed to remove any doubt that this Fed committee will be remembered as being tough in its battle against inflation – equity was where the volatility has most notably been seen and we spill into the new week with a downside bias – notably towards EU equity markets, with the GER40 eyed for a tilt at 12,400.

Powell has now passed the focus onto vice-chair Brainard’s upcoming speech, as well as the NF payrolls, where a number around 300k would almost cement a 75bp hike in September. The USD remains attractive, especially if USDCNH pushes through 6.9000, with USDJPY looking poised to break out above 137.70. EURUSD rallies should be capped at 1.0090, and while there is increasing talk of a 75bp hike in the ECB’s Sept meeting, the bigger issue is the one-way meme type moves in EU energy markets. AUD and NZD were the weak links on Friday, I guess few had expected the S&P500 to get so incredibly savaged on an 8-minute speech, so one to watch as we head back to the July lows.

Gold looks vulnerable for a test of $1700, where we see support in at $1730, so the bears will want a break here. Hard to like XAU until the USD bears regain greater control and real rates roll over.

Another big week ahead – we list the known event risks and thematic’s and how they may go down.

Nord Stream 1 pipeline shuts for maintenance between 31 Aug to 2 Sept – again, the fear is the taps are not turned back on – EU inventory levels are high, which should provide some support to EU assets, but no doubt, if the flow doesn’t resume EU assets will face further headwinds.

Month-end flows – the talk from flows desks is that funds need to rebalance towards US bonds, and out of US equity – the result being a likely net sell-down of USDs. I’ve never seen month-end offering any kind of predictable edge, but it’s a theme to consider.

System Liquidity – the Fed’s QT program ramps up to $95b p/m from the 1 Sept – reserves should fall by the same as the assets that roll off the Fed’s SOMA portfolio. Hard to see this being anything but negative for risky assets, and is a sizeable known unknown – for me, the big issues will be the constraints put on Mr Market, who will be asked to absorb the funding needs of the US Treasury. This is where duration from the Fed’s balance sheet will be passed to the market. If reserves are falling, we question if we will get to a point where we see scarcity. Not a worry for now, but in mid-2023 it could get far more airtime.

Rates Review – we look at the market pricing (in basis points) for the upcoming central bank meeting and the step up (again in basis points) to the following meetings – how will this fare at the end of the week and how will it impact currencies, equity markets and gold? 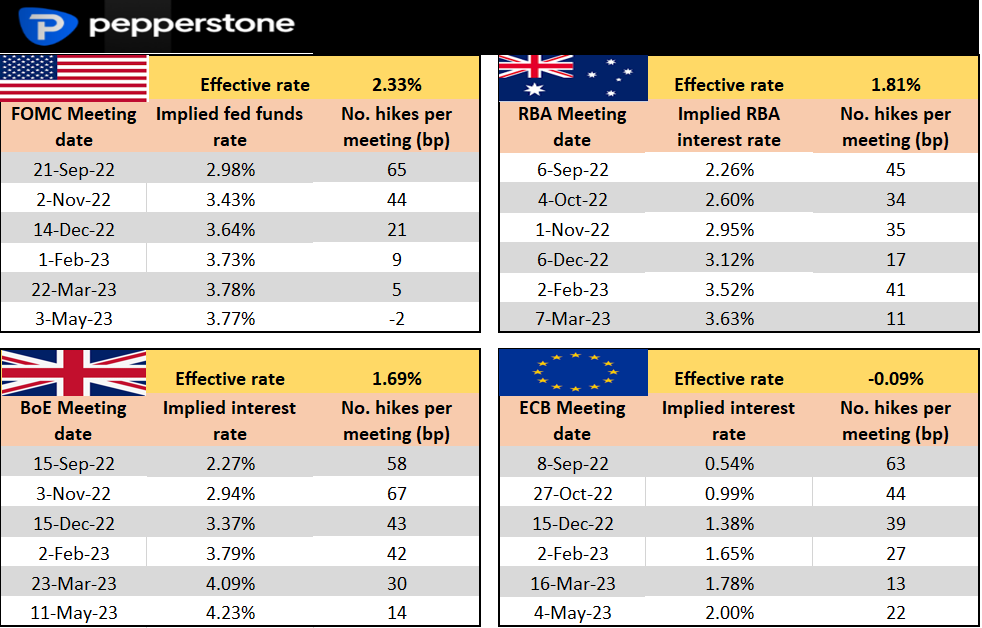 The week ahead playbook

Australia – July retail sales (11:30 AEST) – The consensus is sales grow 0.3% in July despite a 50bp hike from the RBA and a decline in consumer confidence. Would need to be a major miss to affect the pricing for the Sept RBA meeting, which prices 45bp of hikes for September. Watch the 0.6862 swing low for support in AUDUSD, and direction will likely be driven by S&P500 futures, China CSI300 and USDCNH.

US – Fed vice-chair Brainard speaks (04:15 AEST) at a FedNow workshop – Brainard has typically leaned on the dovish side of the ledger, but given Powell’s determined and concise speech at Jackson Hole one could imagine her views will echo that of Jay Powell. The market should expect alignment between Powell and Brainard, so expect volatility if this does not prove to be the case.

China – Manufacturing/services PMI (11:30 AEST) – the outcome could impact USDCNH, copper, CN50 and the AUD if comes out worse than expected - where again the market expects a soft manufacturing number at 49.3 (from 49.0), while the services PMI is eyed at 52.2 (53.8). China equity further consolidates on the daily and is a tough one to read. USDCNH threatened to roll over last week but has regained composure to push higher on Friday – a key FX cross this coming week as we eye a break of 6.9000, where should this play out would put a bid in other USD pairs.

Europe – Aug CPI estimate (19:00 AEST) – the market eyes headline inflation at 9% (up from 8.9%), with core expected at 4.1% (4%). A print above 9.3% would get the market going, although we continue to watch German electricity prices which rallied 40% last week. The EU Nat gas price sits at €306 – up 18% on the week and if this run continues then EUR will find sellers. The GER40 looks destined for a downside test of 12,400 with eyes on the fate of NS1. As detailed above, it’s a big day of ECB chatter with Holzman, Stournaras, Wunsch and Muller speaking from 2am AEST.

Canada – Q2 GDP (22:30 AEST) – the market expects 0.1% growth QoQ, 4.9% YoY – not a fan of GDP numbers as vol drivers but I do see some fundamental support drivers for the CAD, which still looks relatively attractive. The next BoC meeting is on 7 Sept and the market prices 68bp of hikes, so veering towards a 75bp hike.

US – CB consumer confidence (00:00 AEST) & JOLTS report. Consumer confidence is expected to lift to 97.7 from 95.7, which may support asset prices. However the JOLTS report may prove to be the bigger influence – the market expects 10.47m job openings, a decline from the 10.69m seen in June – equity markets rally if we get a lower job openings print, as the Fed want a softer/slowing US labour market. Recall, with 1.9 jobs open to every person looking the labour market is still too hot to take the foot off the hiking peddle.

US – ISM Manufacturing (00:00 AEST) – by way of event risk, this gets some focus after the drop to 51.3 in the S&P US manufacturing report last week. The market looks for this to come in at 52.0 (from 52.8), and a number below 50 can’t be ruled out and would signal a contraction from July and would almost certainly see risky assets roll over. A number above 52 could support the USD.

US – non-farm payrolls (22:30 AEST) – the highlight of the week and along with Aug CPI (released 13 Sept) should really impact the pricing of a 50bp or 75bp hike from the Fed on 21 Sept. The market expects the unemployment rate at 3.5%, with 300k jobs created (the economists’ estimates range from 452K to 75K). Average hourly wages are expected at 5.2%. These are hardly ‘soft’ expectations and after Powell’s speech if these numbers were on the money should lift expectations above 70bp and see a handful of economists revise their call for Sept to 75bp (from 50bp) – this would be a USD positive and negative for the NAS100. Equity bulls really need a soft print below 100k jobs to rally.

The Daily Fix: Equity markets explode, but can it last? 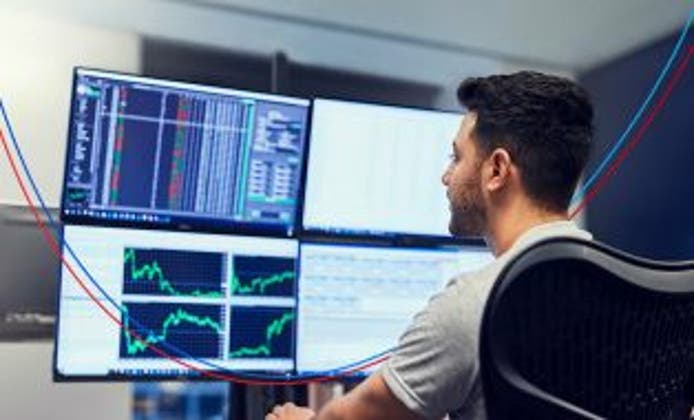