Homepage/Will we see another beat in US CPI this week?/
USDGoldEUR

Will we see another beat in US CPI this week?

Luke Suddards
Research Strategist
Share
Inflation is front and centre again this week. Take a read below to find out more of what you need to know for this marquee macro-economic event.

The market and the Fed remain laser focused on inflation, hence tomorrow’s figure will be another key data point for policy settings. We now know there is an urgency from the Fed to get rates back to neutral rapidly. The street is expecting a print of 8.5% YoY at a headline level and 6.6% YoY for core readings (excludes volatile items like food and energy and gives a cleaner read on inflationary pressures). The spike in energy prices will be the driver behind the headline figure. Could this be the peak in inflation though as unfavorable base effects begin to filter through? Additionally, as the report drops I’ll be scanning to see how broad the inflation is as opposed to being isolated to a few specific categories. The market currently sees a very high chance of a 50bps hike at the May meeting (47bps priced) and circa 225bps by end 2022. US 10-year yields continue to surge higher and now sit around 2.75%. I think given how fully priced STIRs are at the moment, there is actually some downside risk for the greenback. A smaller miss could see selling whereas a significant beat would be necessary to see any upside if at all. The assets with the most sensitivity to this economic print are major dollar crosses such as EURUSD, GBPUSD, USDJPY (particularly), gold and NAS100. 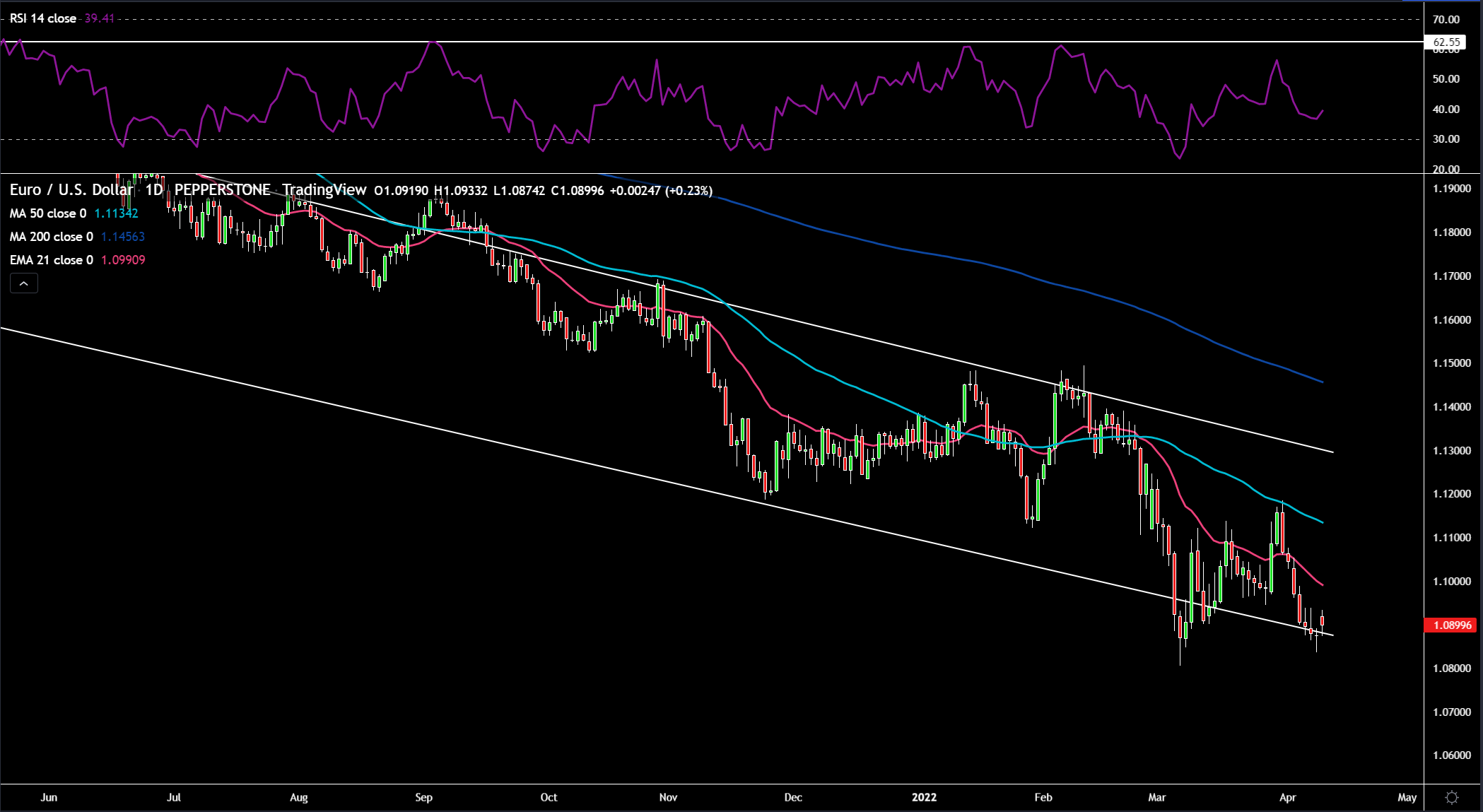 EURUSD has seen a bit a pop higher as Macron did slightly better than expected in the first round of the French Elections. We could be putting in a double bottom here and there is some negative divergence on the charts which would be music to the bulls’ ears. Price sits just above the lower trend line of the descending channel. On the upside 1.10 around the 21-day EMA would likely act as resistance and on the downside 1.09 and the former low 1.08 would be key areas. 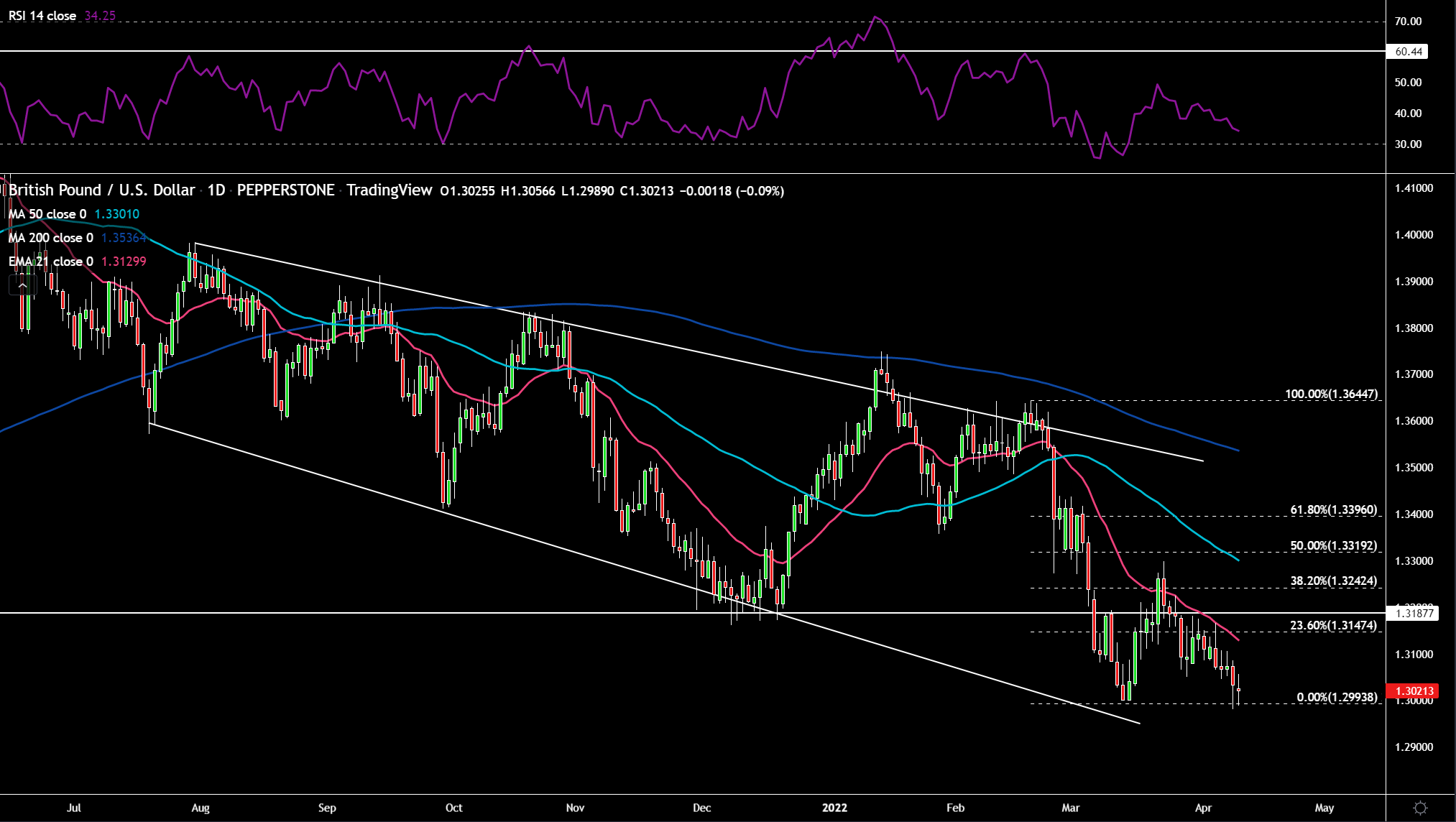 GBPUSD has bounced off the key 1.30 swing low level. A double bottom similarly to EURUSD also looks to be forming as well as negative divergence from the RSI. The 23.6% Fibonacci level and the 21-day EMA is where bulls seem to be finding sticky resistance. 1.30 is definitely the level to watch on the downside. 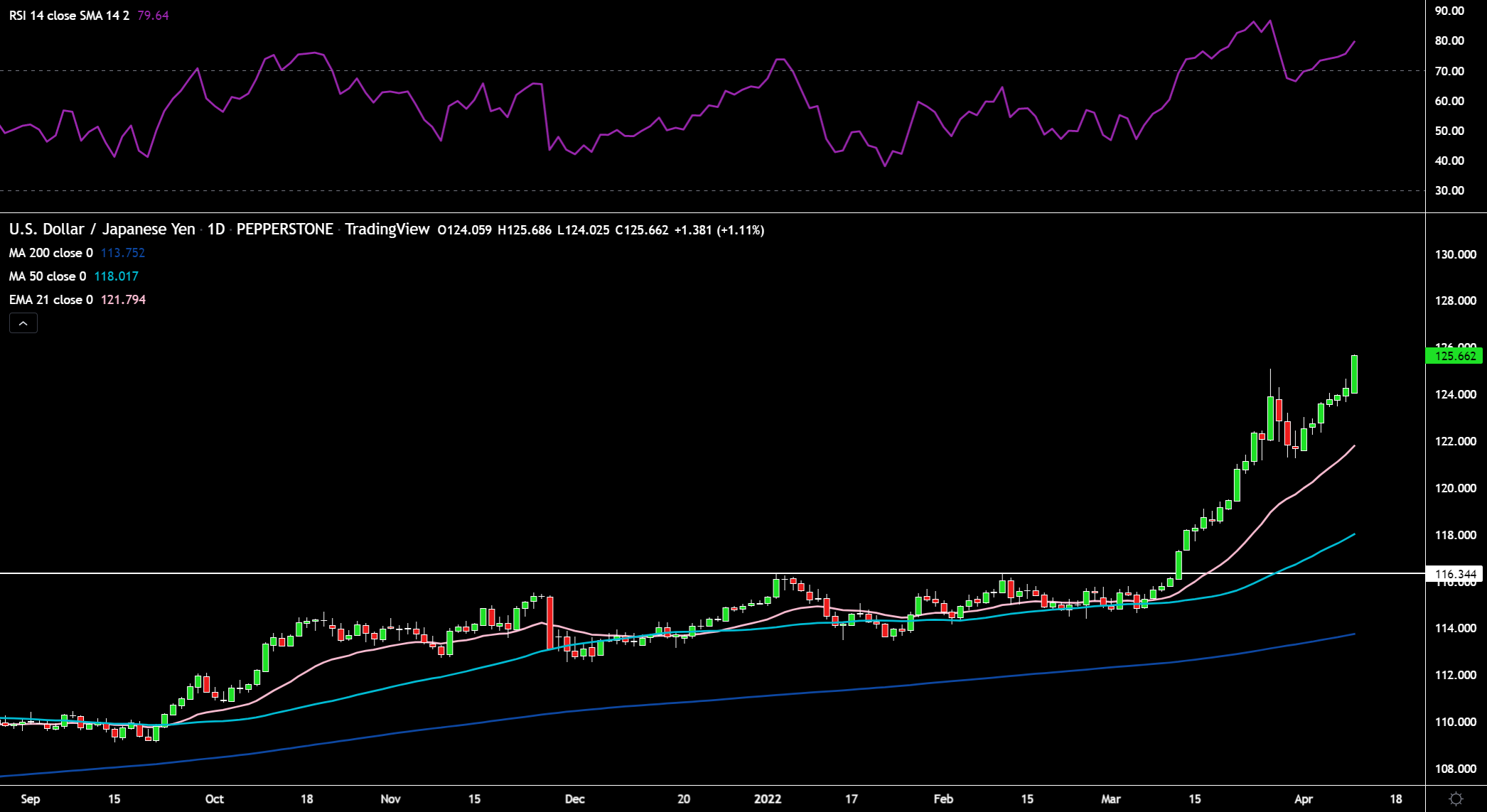 Dollar yen is surging higher, taking out the former high and now trading in the mid 125 region. This is a US yields story quite clearly playing out. We’re back at 2015 highs, yet the RSI isn’t as overbought as it was at the previous high at the end of March. This is a momentum trade for sure and one needs to remain very nimble. Is 130 a possibility? 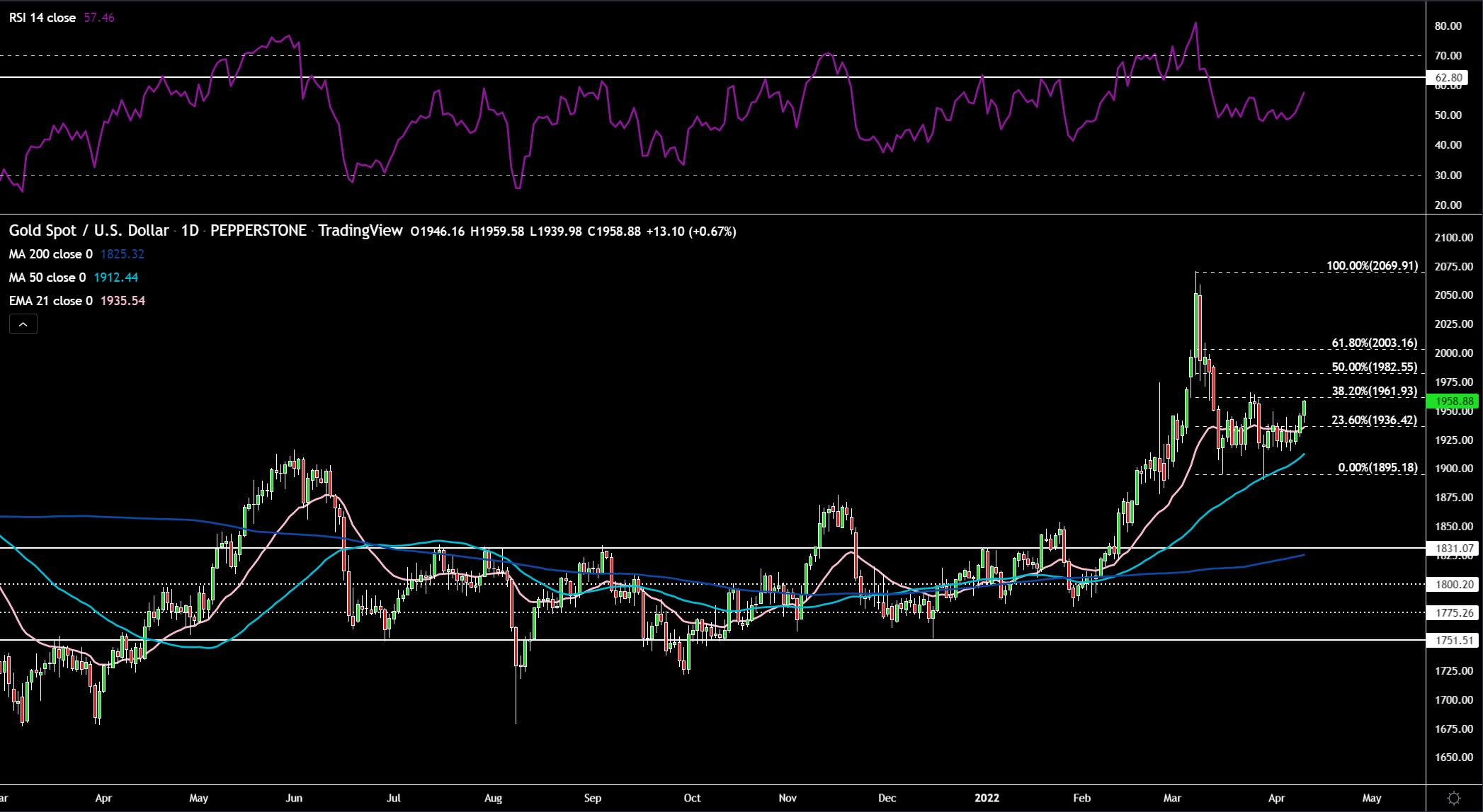 Gold has broken out to the topside of its range despite rising real yields. The 38.2% Fibonacci level is the next one to watch to see if bulls can overcome this zone too. The rising 50-day SMA keeps the uptrend intact. The RSI is moving closer to 62.8, where it has previously struggled pre-invasion. 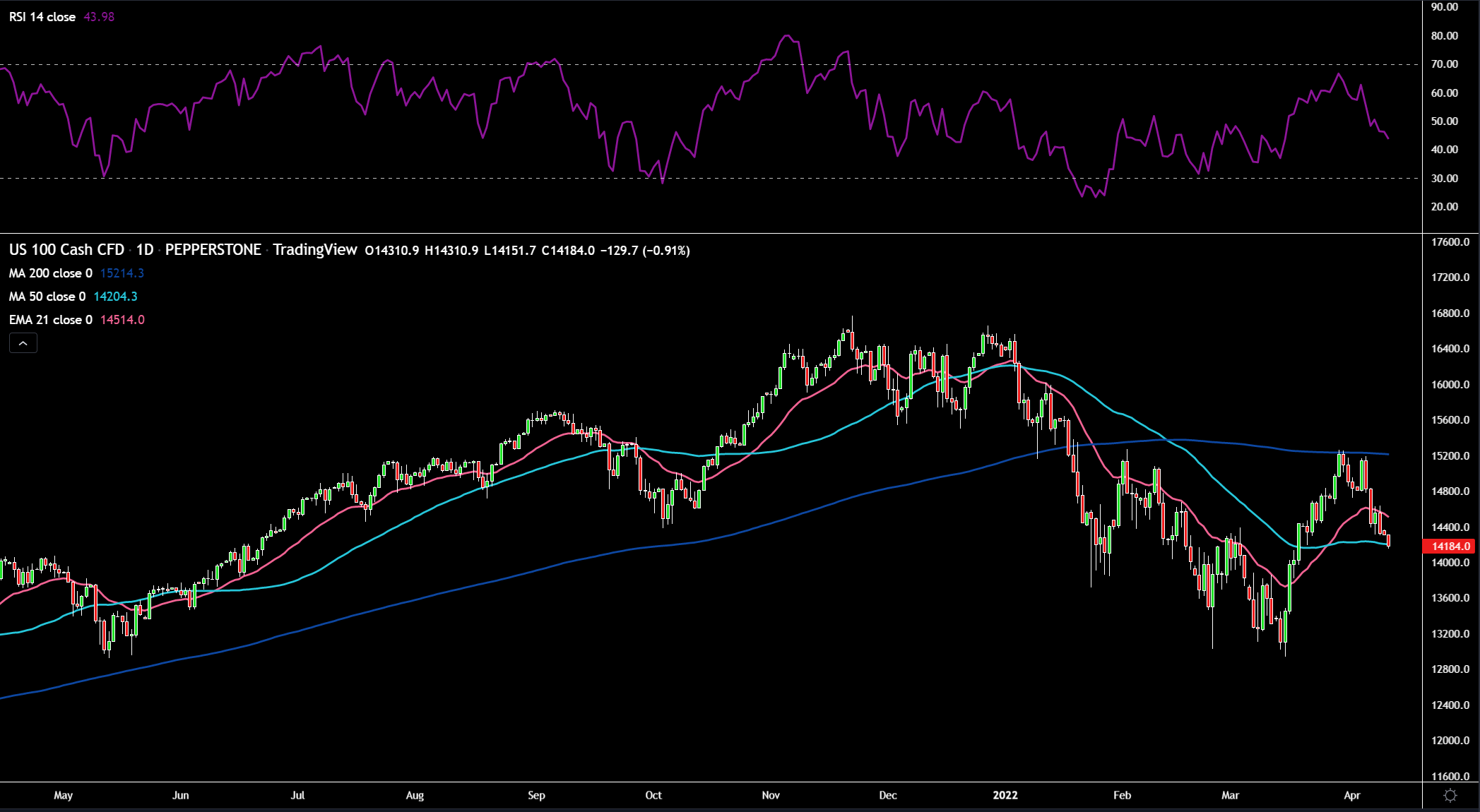 The high growth tech sector is struggling in the face of higher yields and is now sitting on its 50-day SMA after being rejected at the 200-day SMA. The RSI still has some room to go before it can be considered oversold and maybe we see a move down to 14k or we trade a range between the 50-day SMA and the 200-day SMA.