Homepage/Daily Fix: Traders starting to look past the UK election/

Daily Fix: Traders starting to look past the UK election

Chris Weston
Head of Research
Share
European and US traders largely overlooked an increasingly ugly picture in HK, where the Hang Seng closed -2.6% and the CSI 300 -1.8%, and we saw the DAX closing -0.2% and the S&P 500 following with similar form.

European and US traders largely overlooked an increasingly ugly picture in HK, where the Hang Seng closed -2.6% and the CSI 300 -1.8%, and we saw the DAX closing -0.2% and the S&P 500 following with similar form.

Asia should, therefore, welcome the lack of any real drawdown in US trade and we should see a constructive open, where we see S&P500 futures modestly higher than yesterday's respective cash session close. Our ASX 200 call, for example, sits at 6785 (+13), with the Hang Seng eyeing an open at 27150 (+0.8%).

German bunds pushed up a further 2bp in 10s into -24.5bp, while we saw limited moves in US Treasury futures (cash bonds were closed). In this space, I have a beady eye on UST 5s for the re-open, where a firm break of 1.76% (the double bottom neckline) would, in theory, take us to 2.2%. Although, that would really need genuine clarity of a firm improvement in global data and a continued focus on the rapid expansion of the Fed’s balance sheet and excess reserves. It certainly not all about US-China trade and whether we will see a tariff roll-back, although, it seems Trump maintaining that a deal will be signed is enough to keep risk aversion from ramping up.

We can see a lack of belief that prices are going to move too intently in the volatility space, with the VIX index holding below 13%, and only small moves higher in Treasury and FX vols – it’s still all quiet on the Western front. Honing into FX vols, and NZD remains the top of the pile here, and that won’t change until we see the outcome from tomorrows RBNZ meet, where the market places a 61.4% chance they cut by 25bp, which conveniently is fairly close to the split of economist’s calls who favour easing. Still, an 8.5% weekly implied vol (IV) suggests a 63-pip move (higher or lower) in NZDUSD (with a 68.2% level of confidence), so I would say the market is looking for a move of around 30-pips for tomorrow, and for that it’s probably best to look further out the swaps curve and see 27bp of cuts priced in over the coming 12 months.

The fact is, if the RBNZ go 25bp, then granted we may see a quick 15-20 pip move lower, but things should quickly settle down as the pricing out the swaps curve has been validated and like most other central banks, it’s all about a holding pattern and a wait-and-see approach to understanding trade, data and inflation-expectations. Of course, the RBNZ could hold (an outcome I am sympathetic too), and the rally in NZD comes if they don’t offer a clear bias for easing in the next meeting on 12 February. In that case, we could easily see NZDUSD put on quick 40-50pips.

Moves being made in the UK election

Expressing a view on the UK election has garnered renewed interest from clients again, and our GBP flow has picked up. EURGBP 1-month vols have pushed up a touch to 6.16%, and a variable a few options traders will be watching today, as the 12 December UK election falls into this GBP1-month option expiries. The daily chart shows the EUR bulls holding on for dear life here, with the 17 October ‘doji’ low of 0.8575, once again holding. The pair tracks a range of 0.8570 to 0.8700 and my bias is for a downside break, taking us for a re-test of the March-May lows of 0.8472. 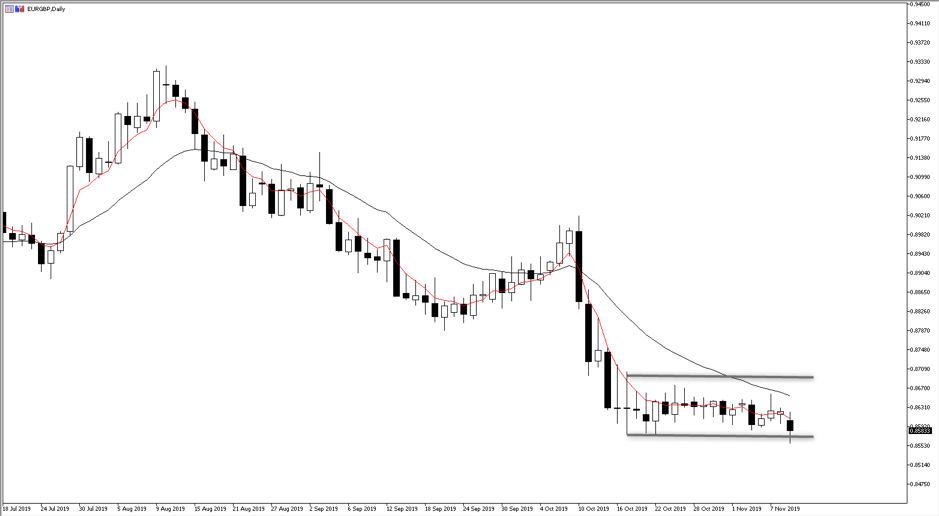 GBPUSD has been the star of G10 FX on the session, although, the bulls have failed to really exert themselves, with sellers fading moves in 1.29. GBPAUD looks interesting, with the pair breaking the bull flag, and with Aussie NAB business confidence due at 11:30 AEDT (no survey) a weak number here could promote a further bid in the pair, although the real risk this week comes from Thursdays Aussie October jobs report. We also have UK employment data (20:30aedt), which could cause a stir in GBP, obviously depending on the outcome. Although it’s a mere blip on the radar when we consider the influence of the UK elections and potential Withdrawal Agreement.

The market starting to look past the UK elections

Moves from Nigel Farage to not contest 317 Tory seats in a bid to limit the options Leave voters have has ramped up the perception that Boris Johnson and the Conservative Party will not just get a majority, but could get a big enough majority (say over 20 seats) that it could limit the influence the European Research Group (ERG) has when it comes to the next stage – the Transition Period. That’s correct, the market – this forward-looking beast - is considering life after the election and the Transition Period that, in theory, has a hard deadline at the end of next year. Of course, that can be extended, and I suspect, if the Tories do get a large majority, we will be talking about deadline extensions, yet again!

A small majority, which the bookies have as a slight favourite in terms of outcomes, puts us almost back to where we’ve been for the past two years, and the idea that in-fighting in the Tory Party (notably from the harder-Leave ERG), let alone the broader Commons, could result in a failure to agree formal terms on the future relationship with the EU, and we start talking ‘no deal’ again ahead of the Transition Period deadline. A large majority arrests that outcome and would arguably see GBPUSD above 1.3000. A small majority, therefore, should keep GBP rallies in check.