Luke Suddards
Research Strategist
Share
Quite an eventful week in markets, let's have a gander at what you need to know before next week.

It’s been quite an eventful week for the greenback. Following last week’s hawkish tilted FOMC minutes we heard from a plethora of FOMC members including Daly, Quarles and Clarida this week who kept the tapering discussion alive. Inflation expectations have been sliding lower, with nominal yields moving higher now just below the 1.6% handle (Biden’s $6 trillion budget, lots of supply to soak up) - combining to push real yields higher. Also, if I look at where real yields were last week I think they’d gone a bit too far and the risk is now skewed to a repricing to the upside – we’re getting a small bounce now and it could be the beginning of a more sustained move as we progress further into summer. Yes, the Fed doesn’t want to hike until deep into 2023, but what they want to do and what they will do could be quite different. We got some really solid demand across the short and medium tenure bond auctions this week. Particularly the 2-year which is most sensitive to Fed policy rates. This could be indicating that markets are betting the Fed will stick to its forward guidance about rate hikes or a distortion caused by institutions parking excess cash reserves in short term instruments. Initial jobless claims continued their journey of travel lower (beating expectations handsomely), reflecting a healing labour market before next week Friday’s key NFP jobs report. The strong bid we saw in the dollar complex on Wednesday as we moved into the London fix was due to month-end dollar demand, potentially a bit more happening today as well? Today’s PCE data was rock solid and beat both on a MoM and YoY basis, it’s also the Fed’s favourite inflation measure. 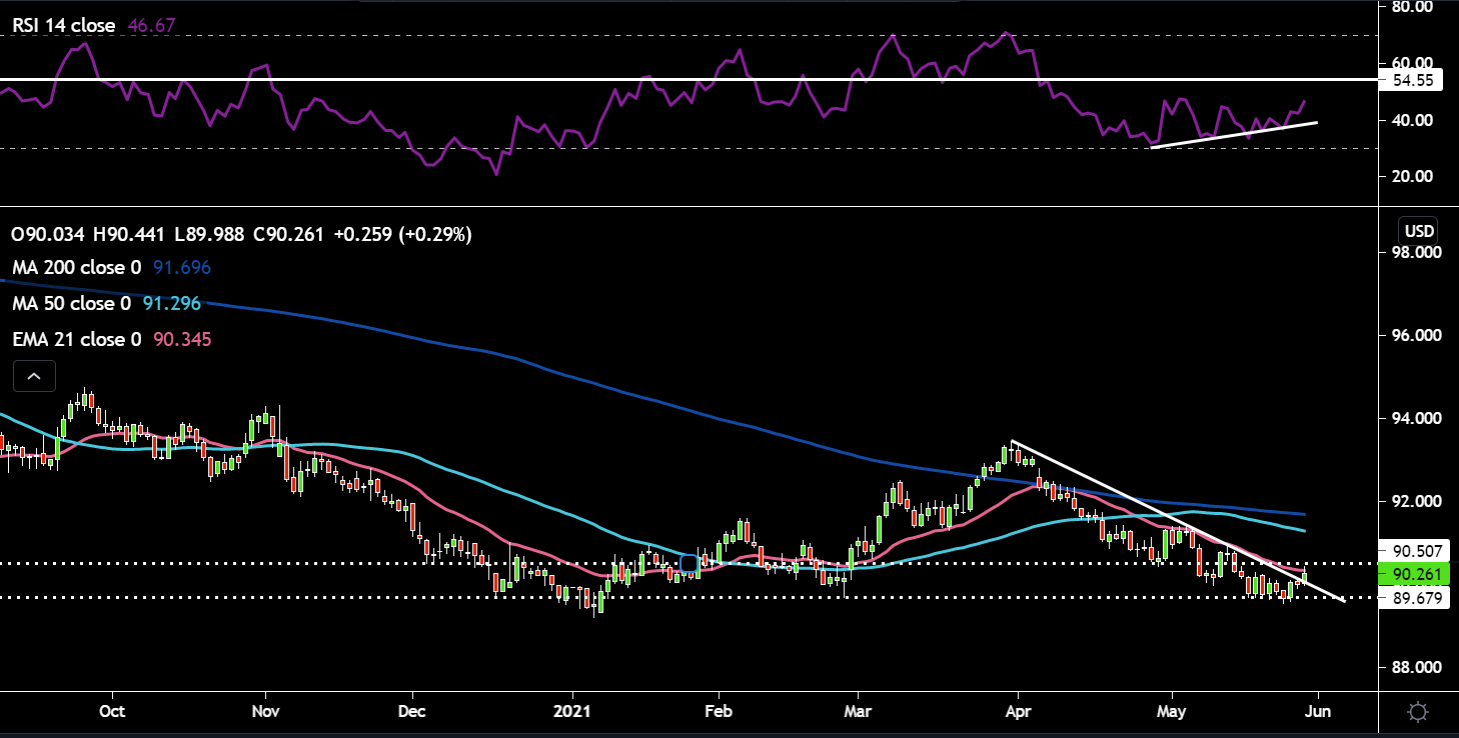 DXY is putting in a pretty chunky move to the upside, having now breached the downtrend line in place from the April high. Price is edging closer to the 21-day EMA which could cause some minor resistance around the 90.345 area. The divergence appearing between price and the RSI was making a move higher more likely as selling momentum weakened. That was combined with solid support around 89.7. The obvious price target to the upside would be 90.5 where there is some former support which could now provide resistance.

It’s been a very barren week for Europe in terms of market moving data, next week will make up for it with PMI data. We did have lots of ECB speakers out on the wires with dovish voices seeming to be winning the battle on the governing council at the moment to be strengthening. Remarks out from the ECB’s Fabio Panetta stating he sees no justification for slowing purchases and the Madame Lagarde echoed this sentiment last week with commentary that it’s far too early to discuss plans for removing the punch bowl. We also had Banque de France's Villeroy de Galhau stating that the ECB will be even more patient than the Fed. In my opinion, this indicates the gulf in thinking between the ECB and Fed, who at least are beginning to raise the topic of tapering. This policy divergence which will most likely widen as we progress through the rest of the year will be a headwind for EURUSD. The small pickup in US yields while European yields have faded is also applying some overhead pressure to the cross. German 10-year yields have fallen back to just under -20 bp after almost reaching zero last week. 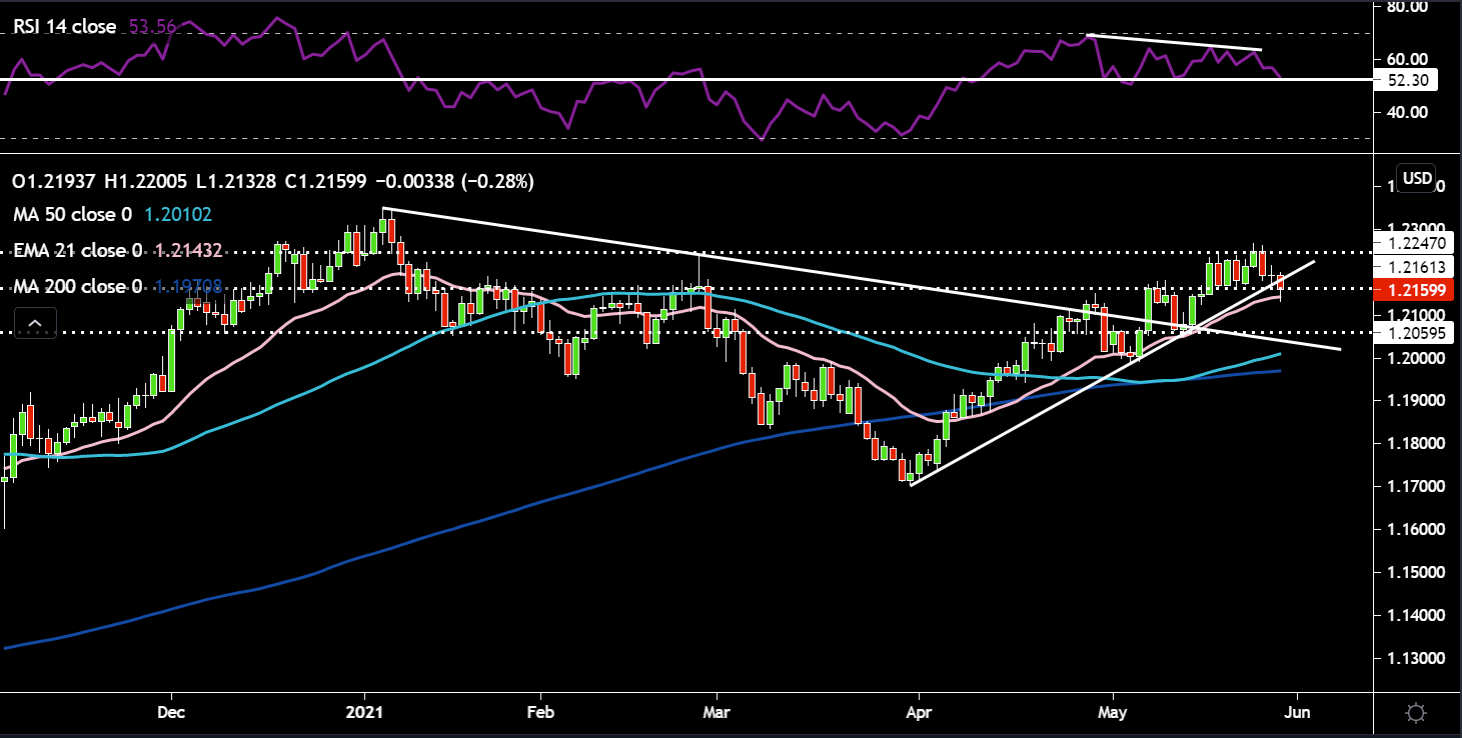 EURUSD is under big pressure today. It’s broken the range low/horizontal support as well as the uptrend line around 1.216. I think a couple stops may have been triggered which were placed just below that level. Price has rebounded slightly off the 21-day EMA. The divergence on the RSI as price made higher highs and the RSI made lower highs seems to have worked as a bearish omen. The RSI is also right on the key 52 support level which has contained previous price dips. The target to the downside would 1.21 and then 1.205 support further down.

Absolutely zero on the economic data front. The most interesting event for sterling traders this week were Hawkish remarks from Gertjan Vlieghe, who is known for being a dove. He stated that a rate hike may be appropriate later in 2022 and could potentially even be brought forward to Q1 if post-furlough employment figures are stronger than expected. As per usual with most central bankers the comments were buttressed by loads of caveats. As it stands Vlieghe is actually set to leave the bank in August unless he scoops up the Chief Economist role from outgoing Andy Haldane, so one has to wonder how much attention we should be paying to his comments. Quite a turnaround from one of the strongest proponents for negative interest rates. The Indian variant has also led to some concerns about the June 21 date of full reopening being pushed back. There is also now a Thai variant percolating around the UK too. On the political front, there has certainly been a lover’s tiff as Dominic Cummings, a former close ally of Boris Johnson gave a scathing committee presentation about the PM. The EU Commission President also pushed back very hard against any changes being made to the NI Protocol and said what was agreed was final.

Cable is paring back lots of its strong gains yesterday as the dollar really picks up pace. 1.42 is proving a difficult level to overcome for GBPUSD, with price now sitting in a tight range between 1.42 and 1.40. The RSI like the EURUSD has some negative divergence present too. It’s also headed towards the key 53 level which has kept price supported on dips. The 21-day EMA is just below the 1.40 support and still pointing northwards. The 1.40 level will be key if further selling pressure continues next week.

The Aussie has been struggling a bit as commodity prices have cooled off as one of the largest buyers, China are trying to blunt further price increases. Also, the state of Victoria has gone into a 7-day snap lockdown which will impact Australia’s 2nd most populated city – Melbourne. 26 infections have been uncovered with another 10k people having come into contact with those infected individuals. That could throw a serious spanner in the works for AUDUSD prospects and pushback any policy normalization from the RBA further down the line. Speaking of the RBA they have a meeting on June 1 next week, but the more important decisions will come on July 6 as we hear if the QE programme will be extended and the 3-year yield curve control maturity extended. Cross flow weakness in AUDNZD also may have put AUDUSD on the back foot given the divergence in the RBNZ and RBA – hawkish vs dovish tilt. 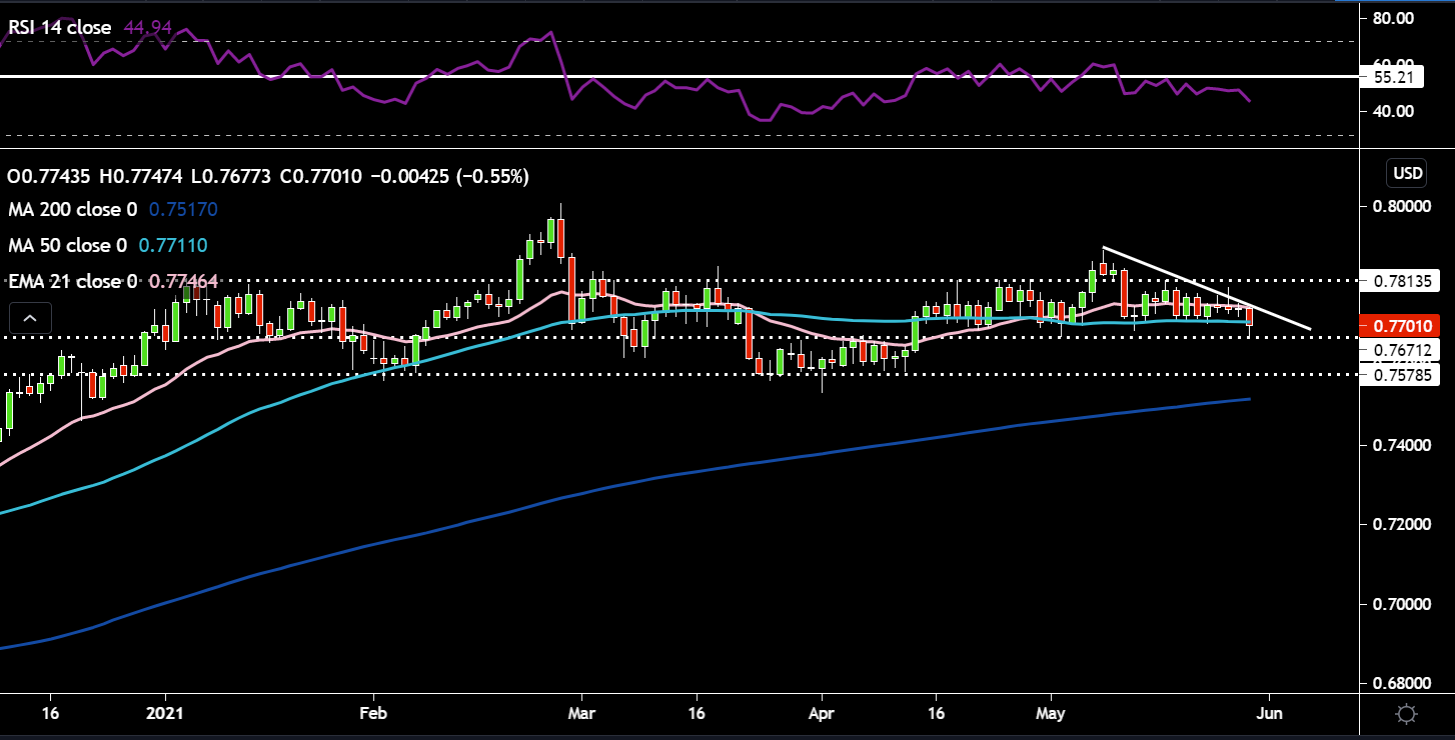 The 0.77 range has been broken with a large bearish candle today. Importantly, the 50-day SMA support has been sliced through too. There is some minor support contain further declines in price around the 0.767 level. The RSI is rolling over and now quite significant below the 55 level. The 21-day EMA has also started to point lower. There is also a flat sided descending triangle pattern that has formed, typically bearish and could see AUDUSD moving down into the low 0.76 region.

Has absolutely surged higher and is now above the 2017 downtrend line as well as comfortably moving into the 110 region. The RSI has gone vertical and still has some room before it could be considered overbought. US yields are back on the rise modestly and are helping this cross push higher. The 21-day EMA is crossing above the 50-day SMA (bullish short term). The next price target would be the late March highs of 111. 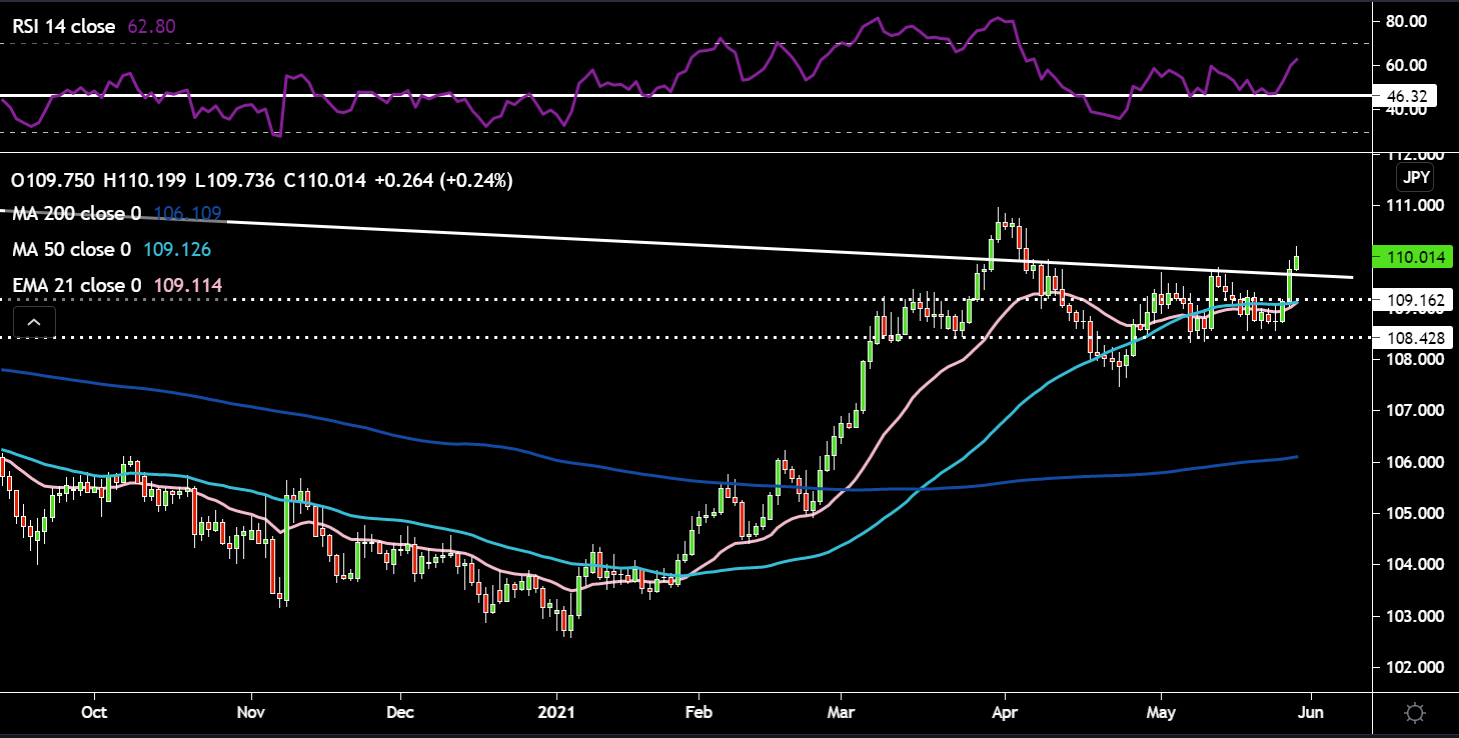 Gold is trading at a slight premium relative to where it should be based on US 10-year real yields. Although gold is weaker I must say I’m impressed with its resilience in the face of a stronger dollar and higher real yields. After today’s strong PCE numbers the next big catalyst for gold will be the NFP report out next Friday which will be key in shaping the market’s tapering expectations prior to the June 16 Fed meeting. 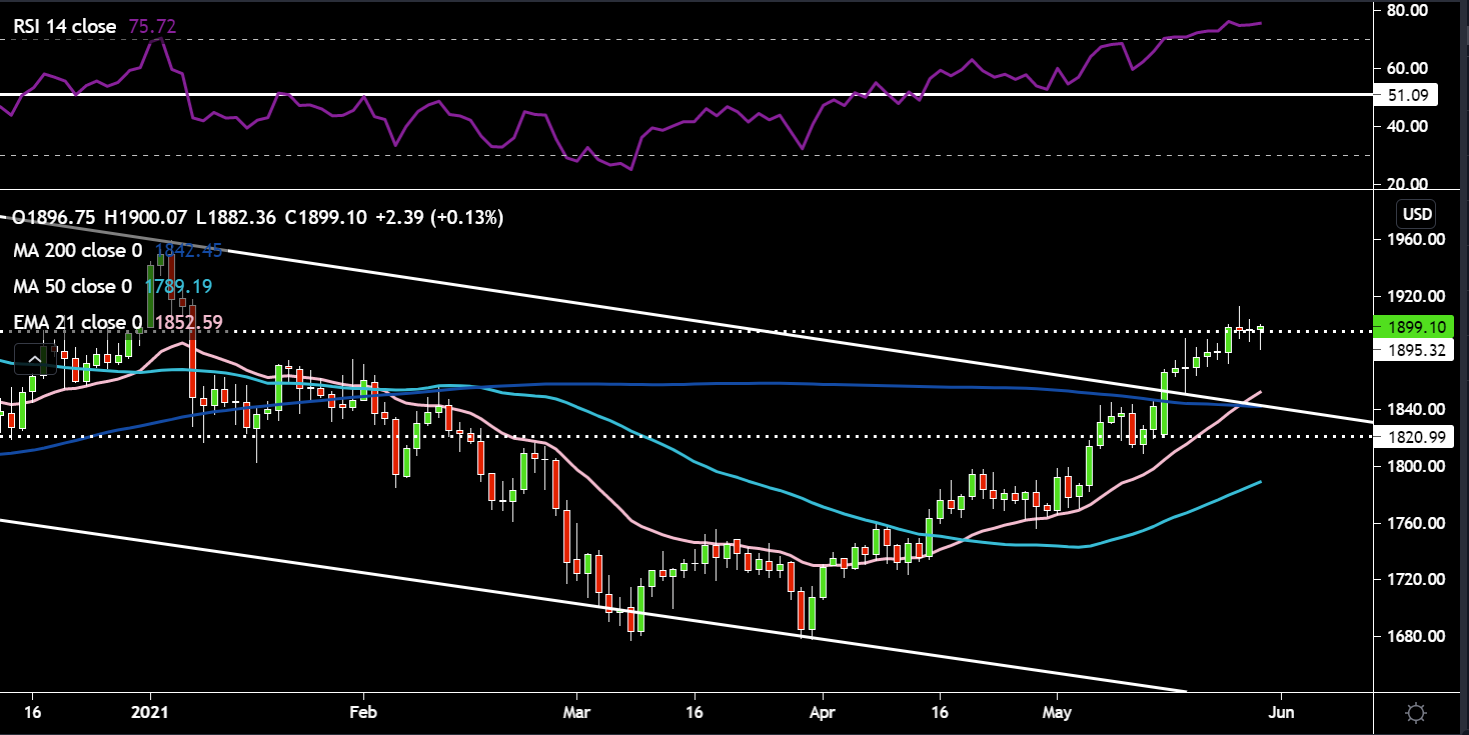 Looking at the technicals we can see price briefly breached the $1900 level and has scaled back now, forming some bearish shooting star and doji candles. Those long wicks to the upside indicate sellers came in and pushed price lower. The RSI momentum indicator is deep in overbought territory and looks to be rolling over too. If the dollar and real yields continues to move higher we could see a re-test of the 200-day SMA and trend line around $1840/50. Gold has run awfully hard over the past 2 months, we could now see profit taking ramped up.

All eyes have been on the Nuclear talks between Iran and the US for the black liquid. It now seems a question of when not if before a deal is sealed. The market is in a holding pattern until they can get some clarity on how much Iranian crude will come back online. E.A Gibson Shipbrokers estimates that they could have about 69 mln barrels of oil in floating storage on tankers. However, oil markets should still be able to absorb additional supply from Iran as demand ramps up with economies reopening up and summer travel season kicks in. US oil inventory data for this week showed strong drawdowns. OPEC+ are likely at the June 1 meeting to stick to existing plan to ease oil-output cuts until July according to OPEC Sources. 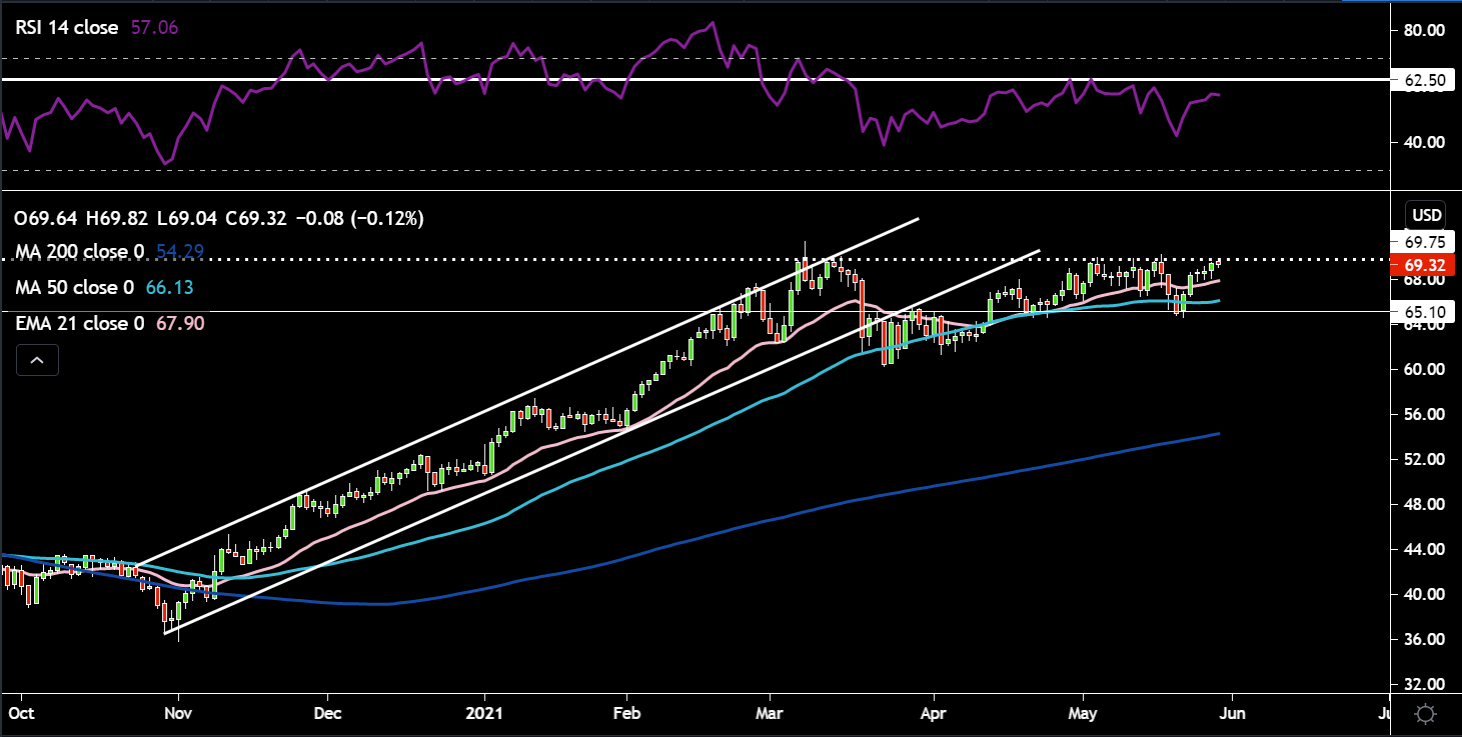 Crude has pushed up right against the $70 resistance, which is proving very sticky for further price gains. The 21-day EMA is acting as a nice dynamic support tool. If price pares off lower from here we could get a mini inverted head and shoulders pattern. The RSI is at around 57 which is lower than previous price pushes towards the $70 resistance area which got up to the 62 zone. Until we get resolution on the US Iran talks, price will struggle to find a discernible direction.

This week we had investing giant Carl Icahn saying he may get into cryptocurrencies in a big way, eventually putting in more than $1 billion potentially. Other than that news flow has been pretty sparse for the digital currency as reflected by the sideways movement in price action. Bitcoin has oscillated between $40k and $38k this week, with a chunky slide below that support today. Until price can reclaim its 200-day SMA I’d feel uneasy to initiate fresh longs. The mini triangle pattern shows a breakout in either direction seems imminent, what will be the next big catalyst? Something else out of China or maybe it’ll be Elon Musk? 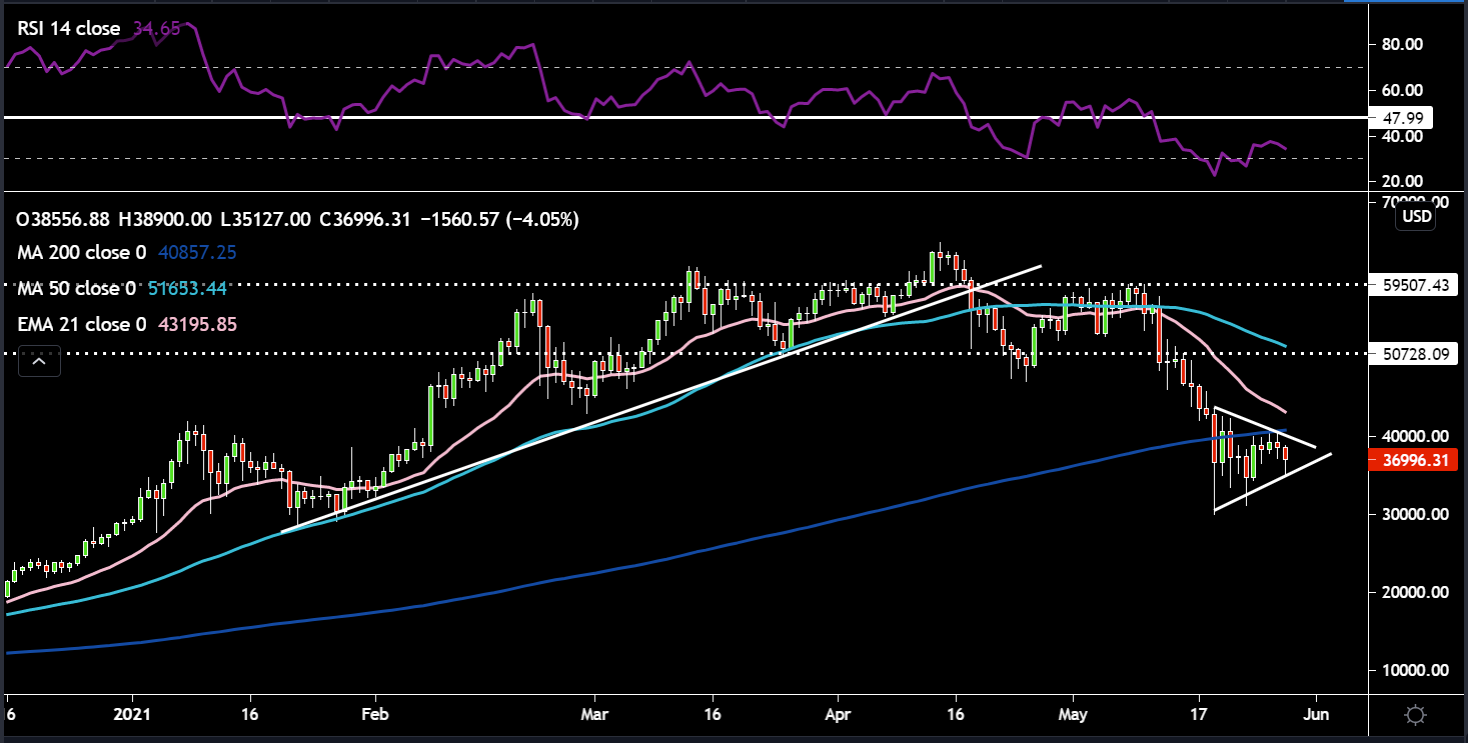 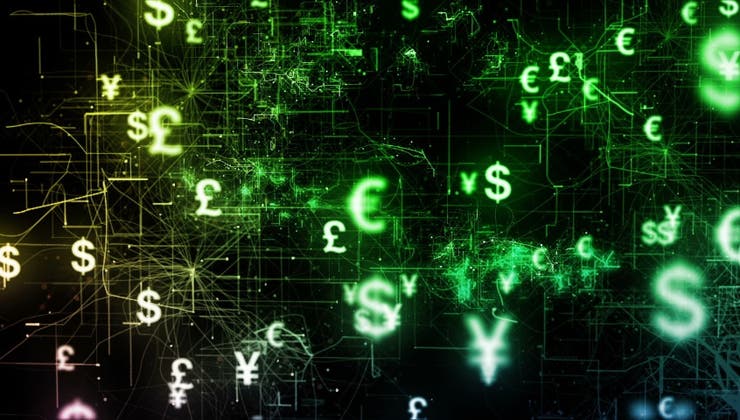