Luke Suddards
Research Strategist
Share
Another big week on the central bank front and with NFPs out in a few hours, we could still be in a for a surprise

The dollar has been following broader risk sentiment as well as the move in yields which have had a high beta to recent hawkish Fed speaker pushback. Traders also had to contend with a potential safe haven bid from an escalation between China and Taiwan. The JOLTS number on Tuesday showed a decline in job vacancies with a print of 10.698mln vs the 11mln expected. Clearly a bit of a slowdown is occurring, however, the employment component of the ISM non-manufacturing report was solid. Initial jobless claims weren’t horrific, only a touch above expectations. This makes today’s NFP number all the more interesting with a 250k print expected.

Tuesday saw yields shoot up after San Francisco Fed chief Daly stated the Fed is nowhere near done fighting inflation. On Wednesday she continued with the pushback that markets are ahead of themselves on the Fed cutting rates (Kashkari also backed this up). So much for no more forward guidance. Daly told the market that a 50bps hike in September was reasonable and the June dots remained a reasonable guide. Equity market resiliency has been a headwind for the greenback. 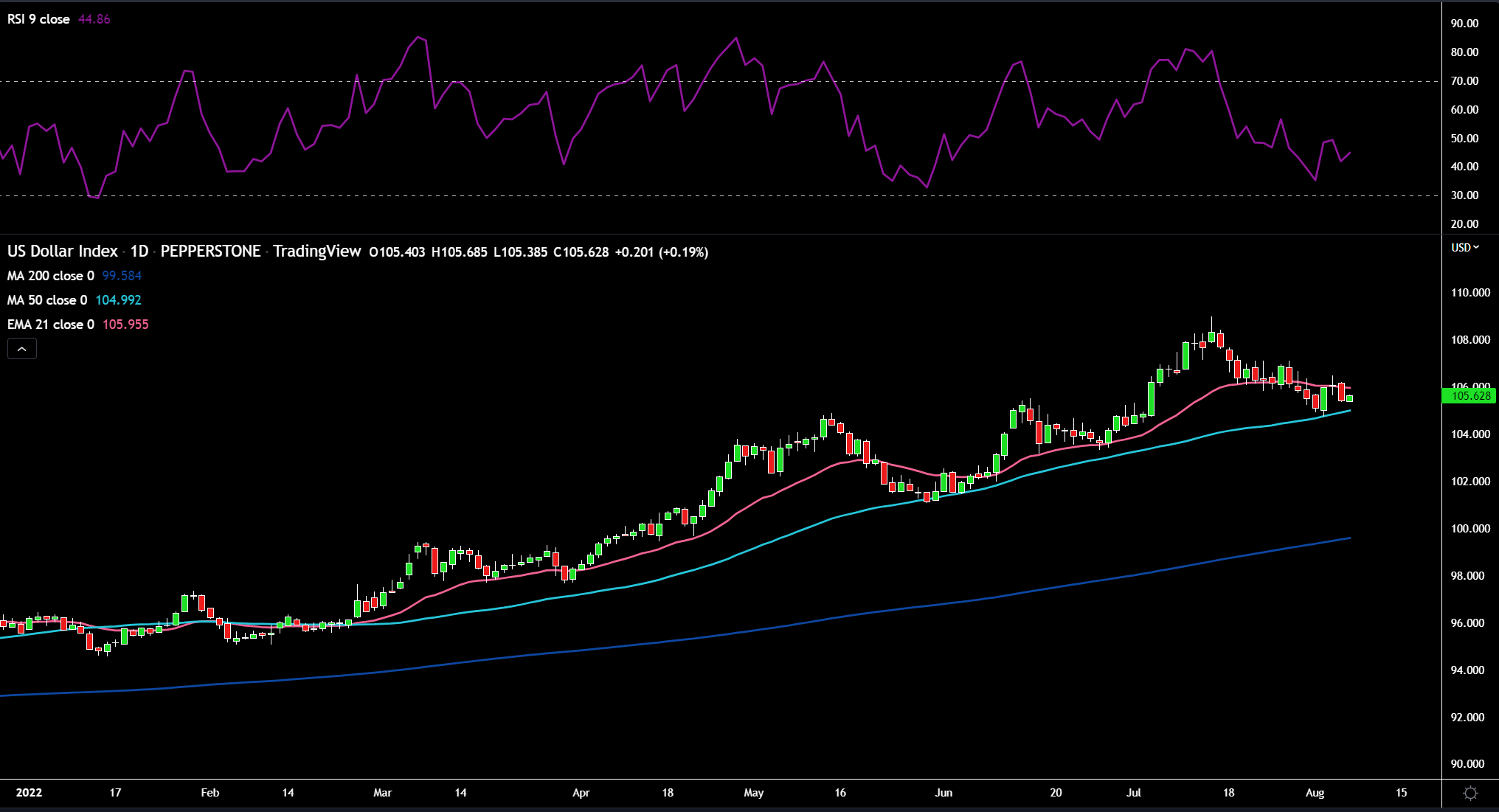 USD remains fairly flat on the week, trapped between the 21-day EMA and the 50-day SMA. Today’s NFP may be the catalyst to cause a breakout. The RSI is in no man’s land and there is no visible divergence. For now the uptrend remains intact with price bouncing off the 50-day SMA. The next major resistance comes in at 107, while downside support would be around 104.8 (50-day SMA and former support).

Europe has been fairly quiet this, however, on Monday we did see a very week German retail sales number (-1.2% vs 0.2% exp). This fed through to the eurozone number as a whole which also was much weaker than expected. Other than that the only other major news was related to gas flows with Gazprom stating that current sanctions make it impossible to deliver turbines to the Portovaya station. The euro remains contained in a tight range and the end result today will depend on how NFPs play out. 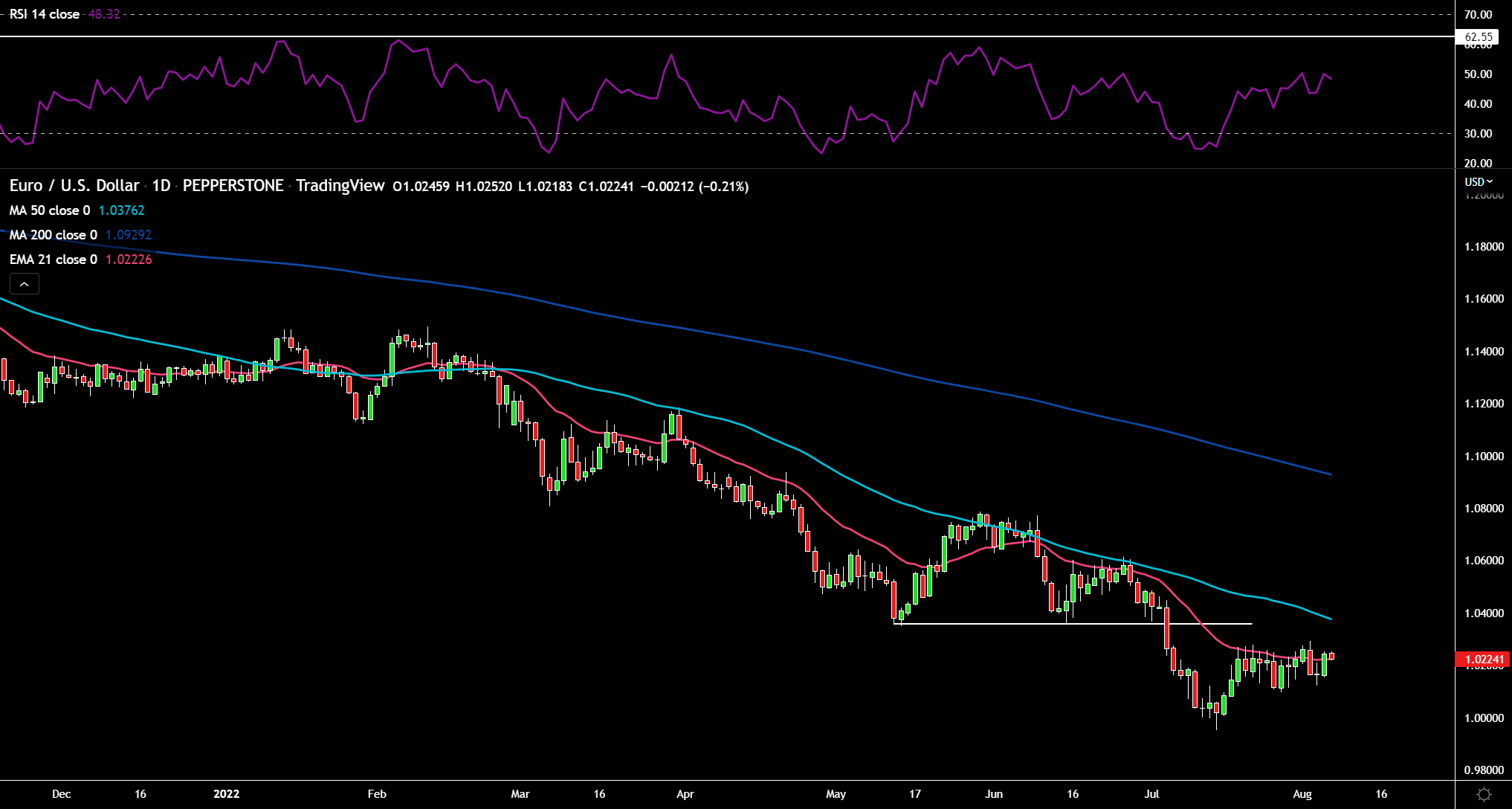 Can EURUSD break above the 1.03 range resistance and move towards its 50-day SMA around the 1.04 mark. The RSI remains below 50, which does point to a downtrend bias. On the downside, support sits around 1.015.

So why did sterling weaken against the dollar and particularly the euro? I think the main reason was the ominous growth forecast with a recession expected to begin in Q4 of this year and last five quarters. Combine this with inflation north of 13% and you get the quintessential stagflation poster child. The forward guidance was watered down in my opinion, although will act forcefully was kept, the BoE copied the RBA by inserting that policy was not on a pre-set path. This to me shows an embedded flexibility and being driven by the incoming data. Additionally, the BoE signalled to the market via their 2024/25 inflation forecasts that current rate pricing is far too aggressive (inflation forecasts are based on market rates). Inflation is way below target at 0.76%, over a full percentage point lower than the target of 2%. The market, however, still stubbornly sees a 91.2% probability of a 50bps move in September and circa 107bps through to December. Lastly, the QT size wasn’t overly hawkish and was a smidge above the midpoint. £80bln is the total amount over the 12-months via a combination of ceasing reinvestments and actual sales. £10bln per quarter in active gilt sales will take place, which equates to £3.33bln per month.

Cable did find some support as the afternoon US session got underway. How we close into the weekend will depend on the jobs print later. 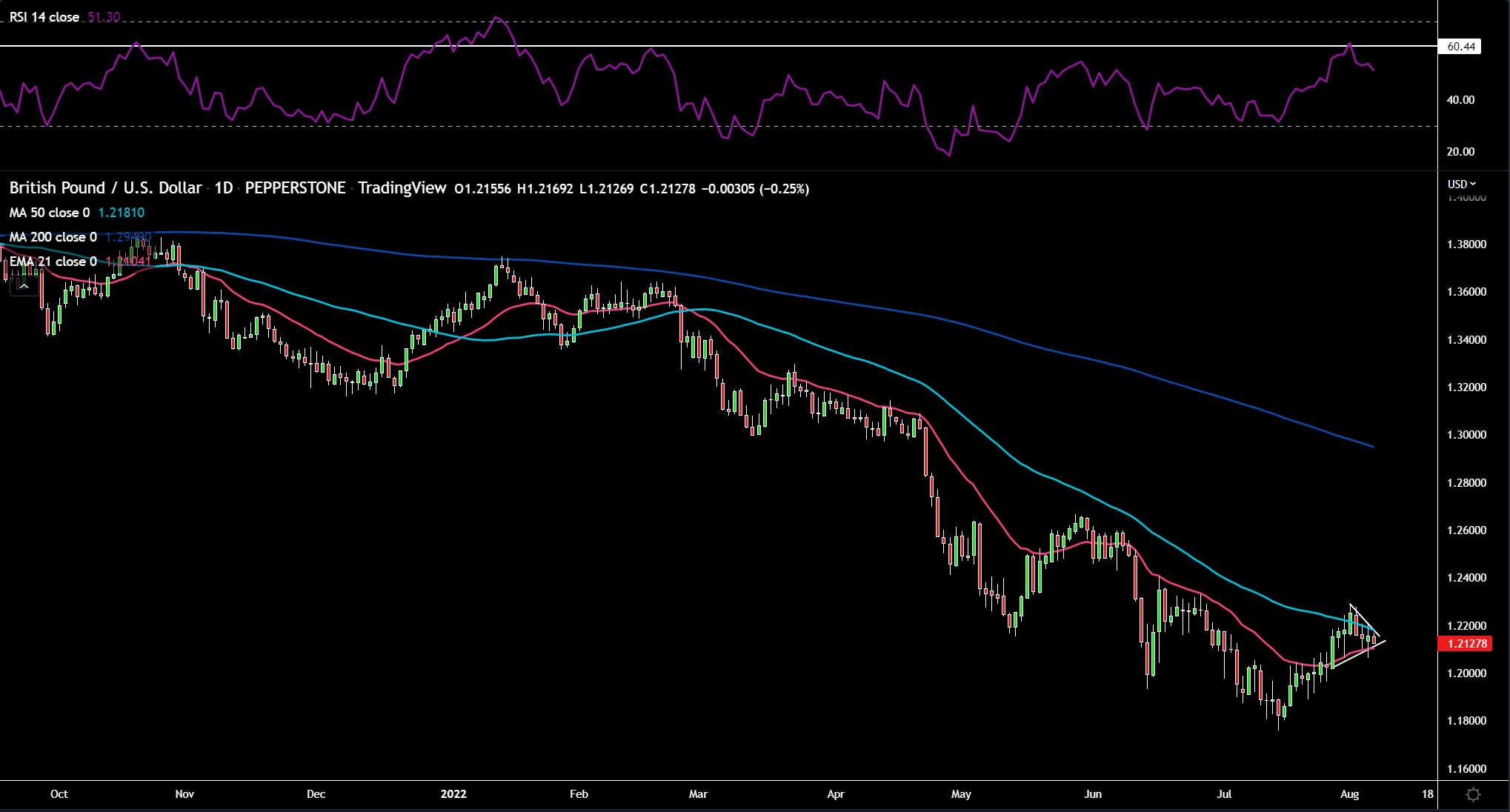 Cable has been squeezed into a mini triangle structure between its 50-day SMA and 21-day EMA. The RSI rejected a key resistance level at 60 and has rolled over from there. The 50-day SMA has been acting as a dynamic resistance area, so this area is key for sentiment. Levels to watch are 1.22 on the upside and 1.20 on the downside.

With the additionally volatility in the US 10-year yield, dollar yen has seen some punchy swings this week. I think another factor given its proximity to China and Taiwan are tensions in that region. Being a significant net importer of oil and crude rolling over will also provide a tailwind for the yen. Non-Farm Payrolls could see a big move in yields which will feed through to USDJPY. With price below its 50-day SMA, the bears remain in control for now. The RSI bounced off oversold levels and now remains around the 40 level. The 130.5/130 level is key for support while 135 would be an important level to overcome on the upside. The 21-day EMA looks close to crossing below the 50-day SMA (short-term bearish). 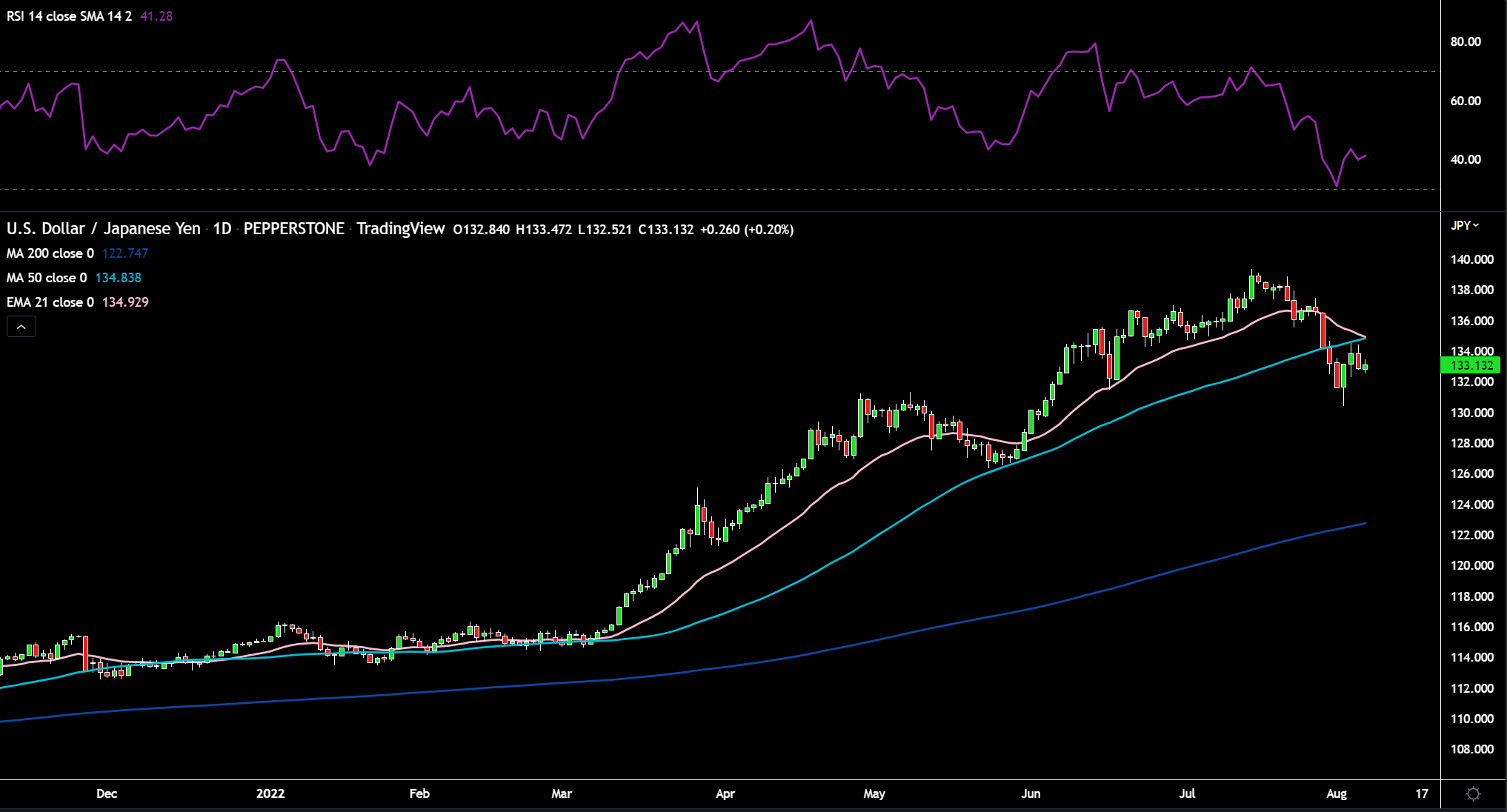 The yellow metal has been one of the best performing asset classes this week, aided by a weaker dollar, geopolitical risk and a fairly stable real yield. Today’s Non-Farm Payrolls will be key for the precious metal given the feed through to yields and consequently the dollar. Will it close above its 50-day SMA into the weekend? $1800 is the next major psychological resistance, while on the downside $1775 and $1750 would be sticky. The RSI has rolled over from a key resistance level at 62.8. Could see a leg lower, all depends on that NFP print today. 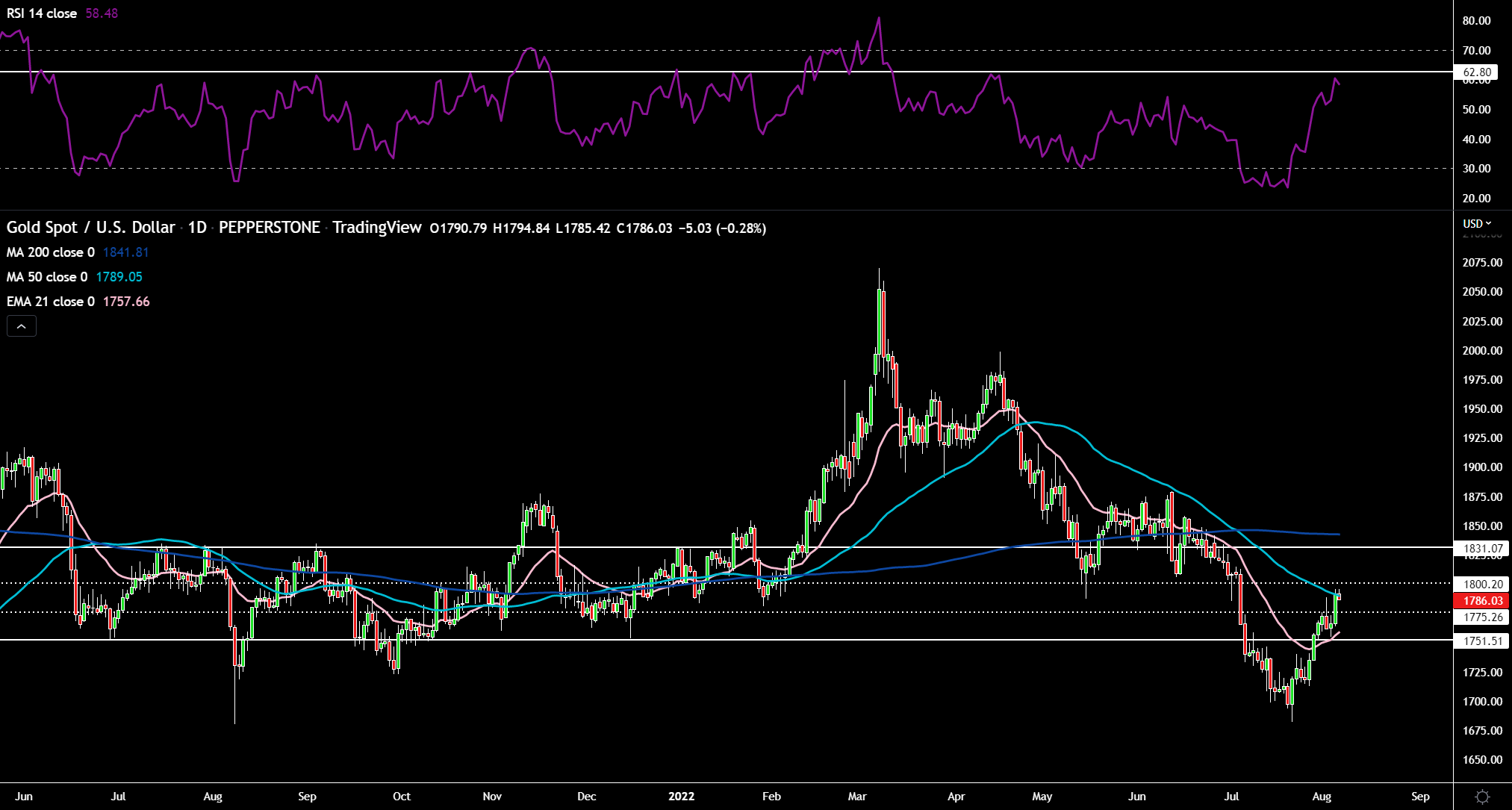 It’s been a shocking week for the black liquid as not even weakness in the dollar and hawkish OPEC+ have been able to stem the sell-off. So despite OPEC+ only increasing production by 100k as members struggle to meet existing quotas and remain short on spare capacity, why the sell-off? US inventory data showed a substantial build in inventories vs a small drawdown expected. Fears of a growth slowdown and recession are weighing on crude as the 2s10s yield curve continues to invert and gloomy predictions from the BoE drive the narrative home. The next OPEC+ meeting will be on 5 September. Firmer risk sentiment in equities hasn’t spilled over into oil, which I must say is strange and could be a sign equities are wrong. 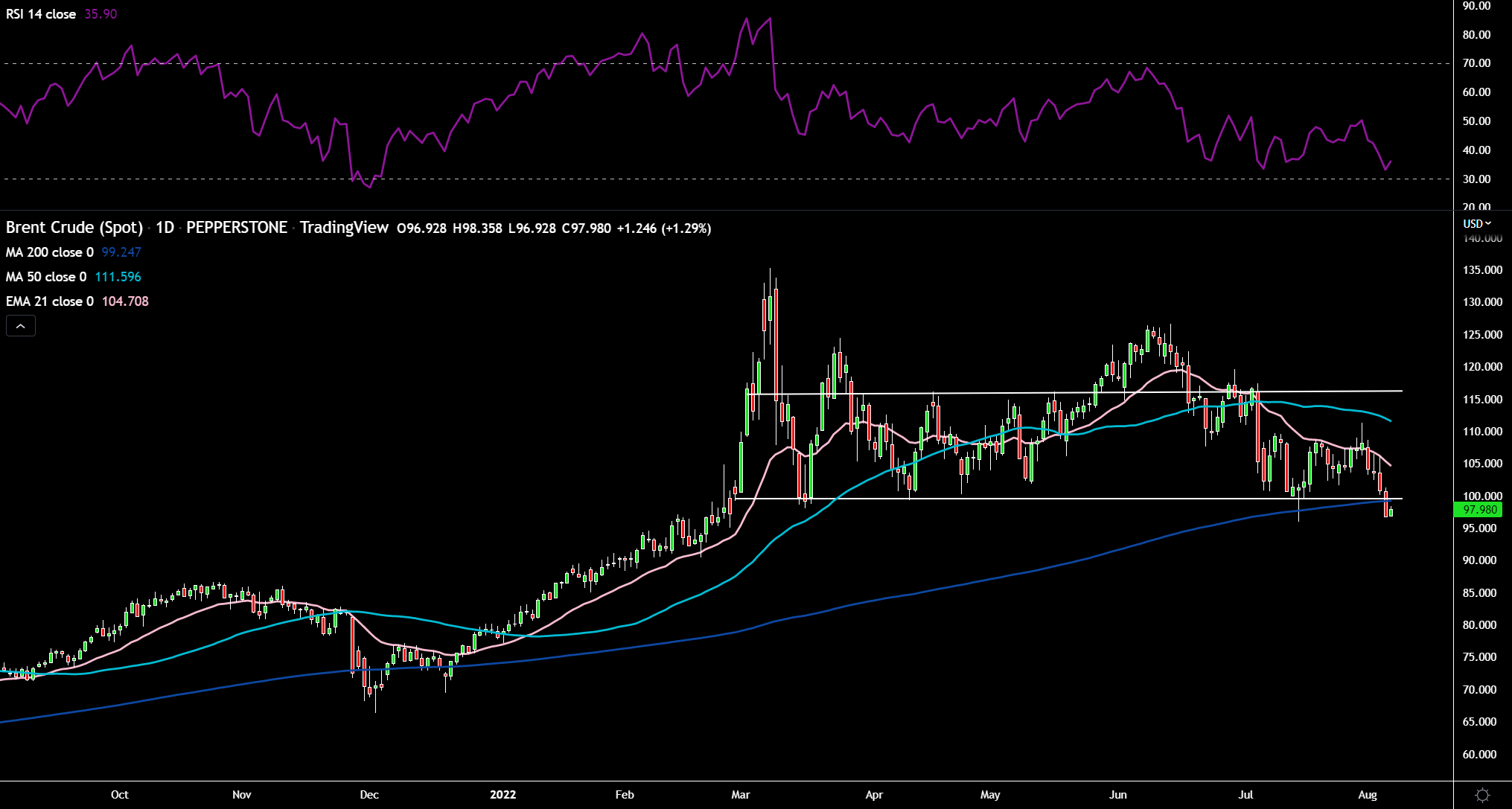 Crude technically is not looking good, a break of its 200-day SMA and the $100 range support changes sentiment to the bearish side. Bulls will need to regain these levels in fast order to shift sentiment. A break of $95 would put $85 in play. The RSI isn’t extremely oversold yet so a push lower could definitely still occur. 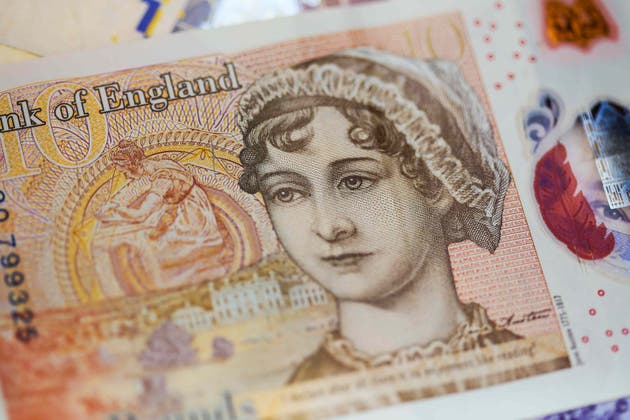 Trader thoughts - assessing the feel of the markets into US payrolls