A traders’ week ahead playbook – the emerging case for gold appreciation

Chris Weston
Head of Research
Share
The recession trade came back with full force on Friday, with EU bonds feeling some massive love with the German 2yr bonds rallying incredibly from 0.64% to 0.36% before settling at 0.45%.

There was solid buying in US Treasuries (UST 5’s fell 14bp) in response to the woeful EU (49.4) and US (47.5 on the composite read) PMI’s, which then, in turn, saw traders pile into the JPY. The JPY has firmly settled as the default bond proxy in G10 FX, outperforming when bond yields fall and vice versa - a development of the idea that the BoJ will be the only G10 central bank by September to have negative interest rates.

CADJPY was the big percentage mover on Friday, although our flow was centred on USDJPY, with most looking to ride this pair lower. 134.00 should be the floor on any USDJPY selling this coming week, driven by lower nominal and real USTs, with the 50-day MA capping the selling. If trading the JPY, then CADJPY or GBPJPY may be better shorts from a momentum perspective.

I am warming to gold and think the yellow rock works in this backdrop where traders are questioning if the USD is our default hedge against equity drawdown. $1763/70 likely caps the near-term upside, however, a break would require not just a general disdain for all G10 FX, but where gold works as a currency (in its own right) and that requires poor US data and a dovish hike from the Fed.

In the week ahead, the headline writers will be eyeing US Q2 GDP closely in case we see the US print a second negative quarter and a technical recession, although whether it gets confirmed by the NBER is another thing. The consensus is we see modest growth in Q2, but it would not surprise if we did see a small contraction – any selling of risk here would purely be semantics as the labour market is still red hot.

The FOMC meeting gets the lion's share of attention and a 75bp hike is the default setting, with a small risk they go 100bp. The bigger issue seems to be the appetite to go 50bp or 75bp in the September meeting, as well as an increased concern for growth. As we see in the Rates Review, 50bp for September feels fair, especially as the Fed’s QT program kicks into top gear in September and the Fed start to reduce the assets on its balance sheet by $95b p/m. The Fed will also be reasonably content that the various inflation expectation gauges are headed lower.

Positioning will be a dominant factor in driving the USD and I can make a case for a weaker USD this coming week, but I don’t see it as a result of a dovish shift from the Fed. More a play on growth concerns that see 2023 rates pricing go deeper into negative territory - again, this suggests upside risks for gold.

EU CPI is expected to increase to 8.7%, subsequently confirming the call from the ECB to hike 50bp last week. EURUSD 1-week implied vol has pulled back to 12.1% after a huge week last week, but the daily chart of EURUSD shows price stuck to the middle of the multi-month regression channel. As the vol matrix shows, 1.0300 to 1.0050 seems a reasonable range to trade EURUSD on the week.

Aussie Q2 CPI kicks in this week and the market feels fairly convinced we get 100bp of hikes over the next 2 consecutive RBA meetings, taking the cash rate into a neutral setting. AUDUSD works as a growth proxy, and after a rally into 0.6977, the recession thematic brought out the sellers, as profit-taking into the 50-day MA resulted in a Doji candle on the daily - this indecision needs to rectify itself – despite the negative feel on global growth, I’ve no sell signal on the longer timeframes in AUDUSD, with momentum indicators still bullish – much depends on Chinese and US equity markets and the growth narrative. A downside break of 0.6859 would suggest we revisit the 0.6700 level.

We see half the S&P500 market cap report this week, so if you’re trading single stocks or equity indices it could get a little wild, especially just after the US cash close (6 am AEST). I expect Apple, Meta, Intel, Amazon, Microsoft, and Alphabet to get the love from clients, and all could move the index as well. Put them on the watch list.

Another big week. The narrative evolves with price action, but one thing is for sure, these markets are never dull.

The week ahead event risk calander and trader playbook – if you cant read this on email click through to the Twitter thread for increased clarity - https://twitter.com/PepperstoneFX/status/1551030352340451328?s=20&t=2-UsGd3cocgpDm4S6GYufQ

Implied volatility (IVOL) Matrix – taking into consideration the event risk disclosed above we look at the implied moves, which are derived from options pricing. We can calculate the expected move on the week and project to get an expected trading range with a 68.2% and 95% level of confidence. Good for understanding the perceived risk on each asset and for mean reversion. We continue to see EURUSD having the highest relative IVOL, although it’s come down sharply.

Rates Review – we look at interest rate market pricing for the upcoming central bank meeting and then the step up (in basis points) to the following meetings. You can see the market prices 77bp of hikes for the next FOMC meeting and prices the fed funds rate circa. 3% in September – that could change on the idea that perhaps the Fed hike another 75bp in September. 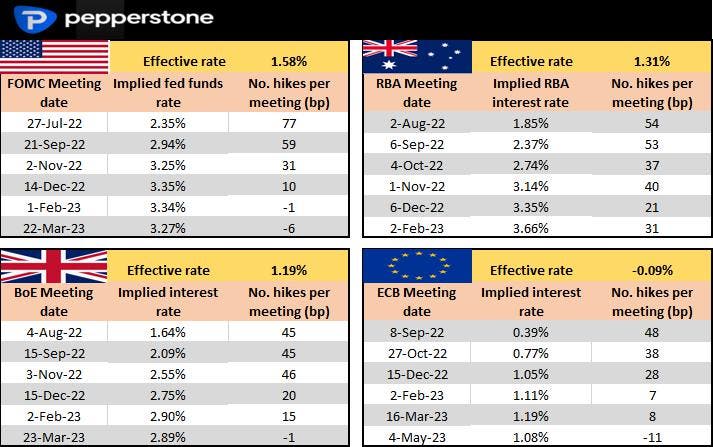 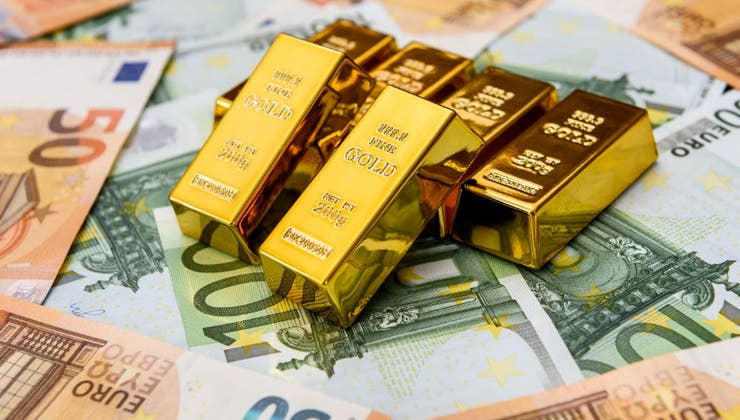 Strategy sessions - where to fade moves in EURUSD and Gold 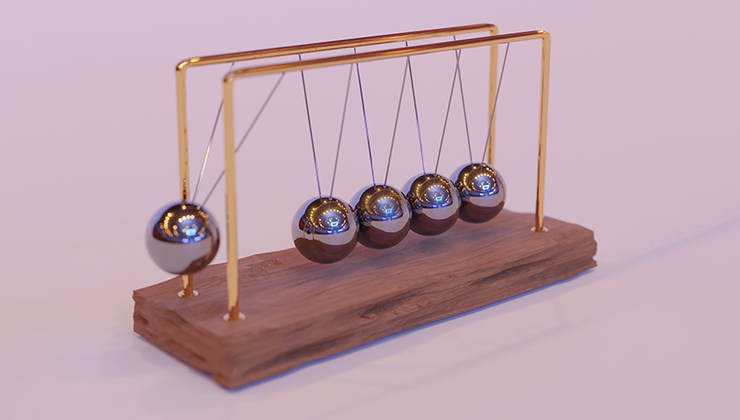