Luke Suddards
Research Strategist
Share
The market is on tenterhooks for tomorrow's jobs number. Let's take a look at what you need to know below.

Volumes and vol has been not exciting to say the least, however, this Friday’s US jobs release (1.30pm UK time) could see the market’s cage rattled. The Fed places significant weight on this metric with regards to informing their tapering decisions (which Powell acknowledged could begin this year), hence there is pressure on the labour market front to perform. They expect to see additional progress on the job market recovery in coming months. To me this means the next 2 months of jobs data needs to be solid (800k-1mln) for tapering to begin before year end. Inflation progress has been met so its now jobs which carries the mantel piece. Consensus expectations are for a gain of 750k jobs in August.

ADP numbers out on Wednesday provided an ominous signal for Friday as they missed expectations of 638k by a massive amount, coming in at 374k. It must be noted, the ADP does have a pretty shoddy track record in terms of its predictive prowess and has under-estimated the NFP numbers numerous times in the past months. Adding to the dismal ADP numbers were the ISM’s employment figures which indicated it had fallen into contraction territory (for manufacturing not all sectors). Initial jobless claims and continuing claims both improved on their previous numbers and came in better than expected, adding a small ray of hope for tomorrow. It’s a tough one to call because you have jobless benefits rolling off which should boost hires, however, the delta flare up will counteract this. High frequency labour data has been pointing to a slowdown in hiring activity. On the basis of this, it does seem like a miss to the downside could be the more probable outcome on Friday. The magnitude of the next 2 jobs’ reports downside misses/upside surprises will dictate whether tapering is kept on track for this year or delayed into 2022 (later than January). I’ll also be keeping my eye on the participation rate as well as the broader U6 unemployment rate.

Assets with a high beta to yield changes will be in the firing line such as the dollar, EURUSD, USDJPY, gold etc. As you can see there is a wide variety of instruments that can be used to trade tomorrow's event. 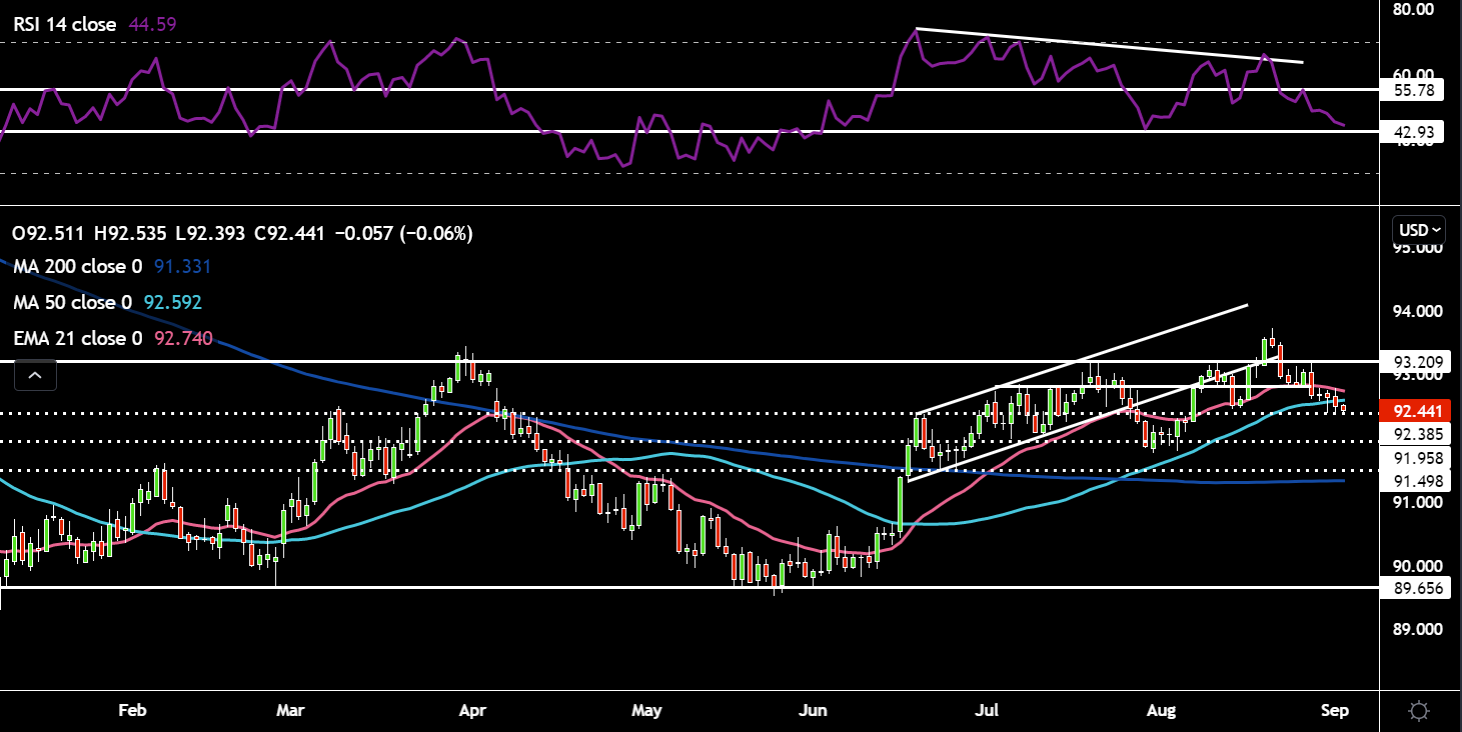 The dollar has been struggling post Jackson Hole - the bulls desperately need a strong labour number on Friday to turn things around. Price is below its 50-day SMA and is sat on the 92.385 horizontal support. The RSI has fallen below the 55 level and is now hovering just above the 42.93 mark where price managed to hold last time it sold-off. I do wonder if the dollar index is in a range between 93.209 and 89.656 as indicated by the white solid lines drawn on the chart. The upside price target would be 92.8 horizontal resistance and above there range resistance at 93.2 (around previous highs). On the downside, 92 and 91.5 (above the 200-day SMA) would pique my interest. 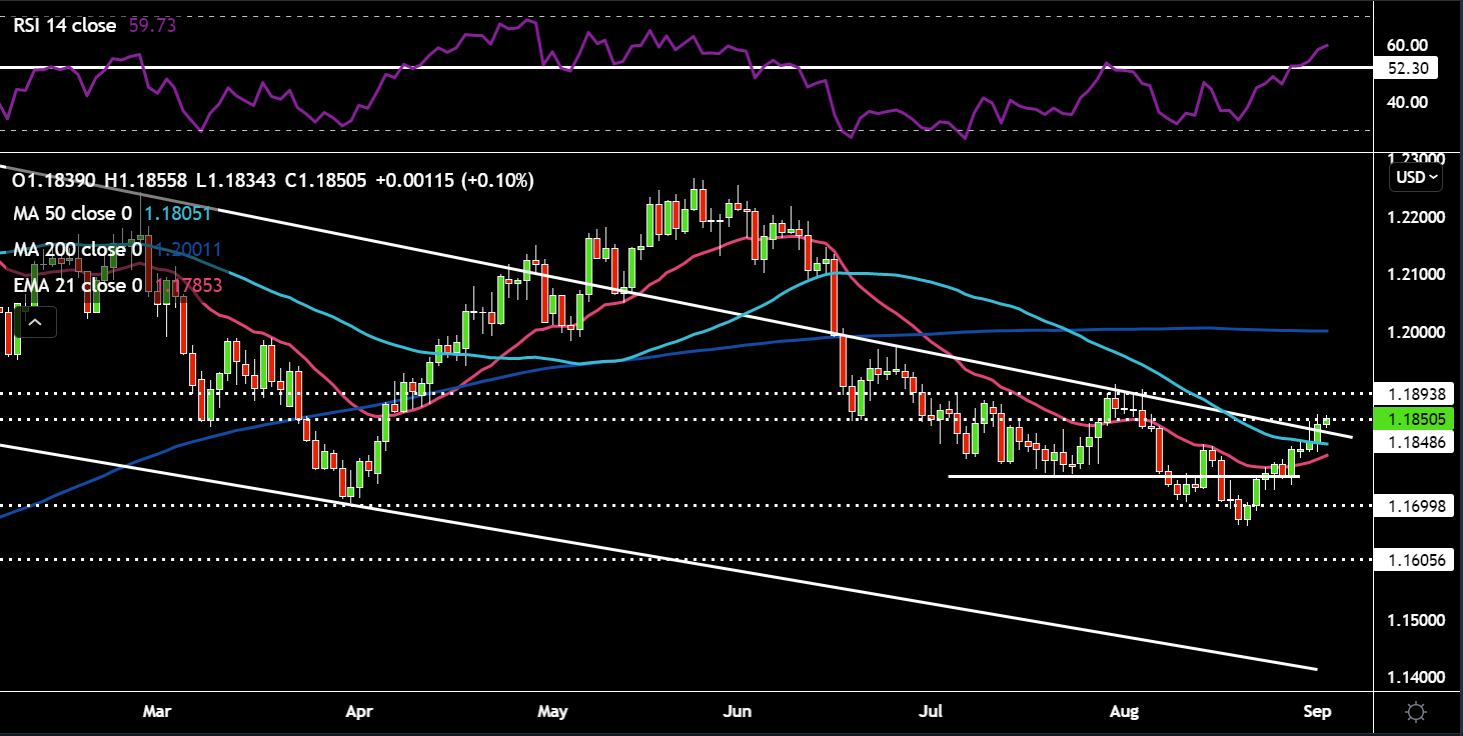 The euro has been resilient of late against the dollar, climbing above its 50-day SMA and upper trend line of its descending channel. Price is also now up against the 1.185 horizontal resistance level. The RSI has surpassed the 52 resistance zone too. Movement in this cross will depend on the NFP number due tomorrow. A weak number could see EURUSD move towards 1.19 resistance and a strong number could pressure the euro lower towards 1.18 (50-day SMA) and 1.175 support. 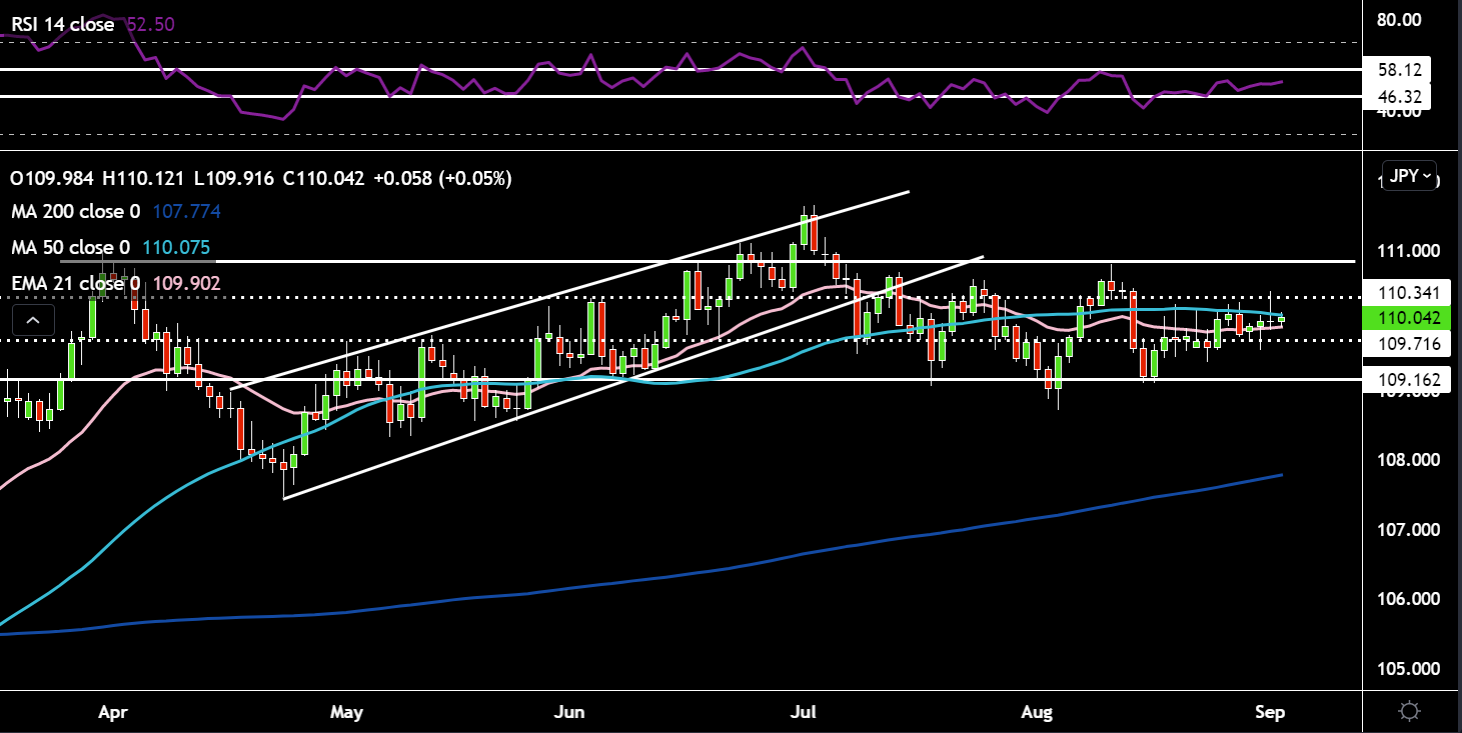 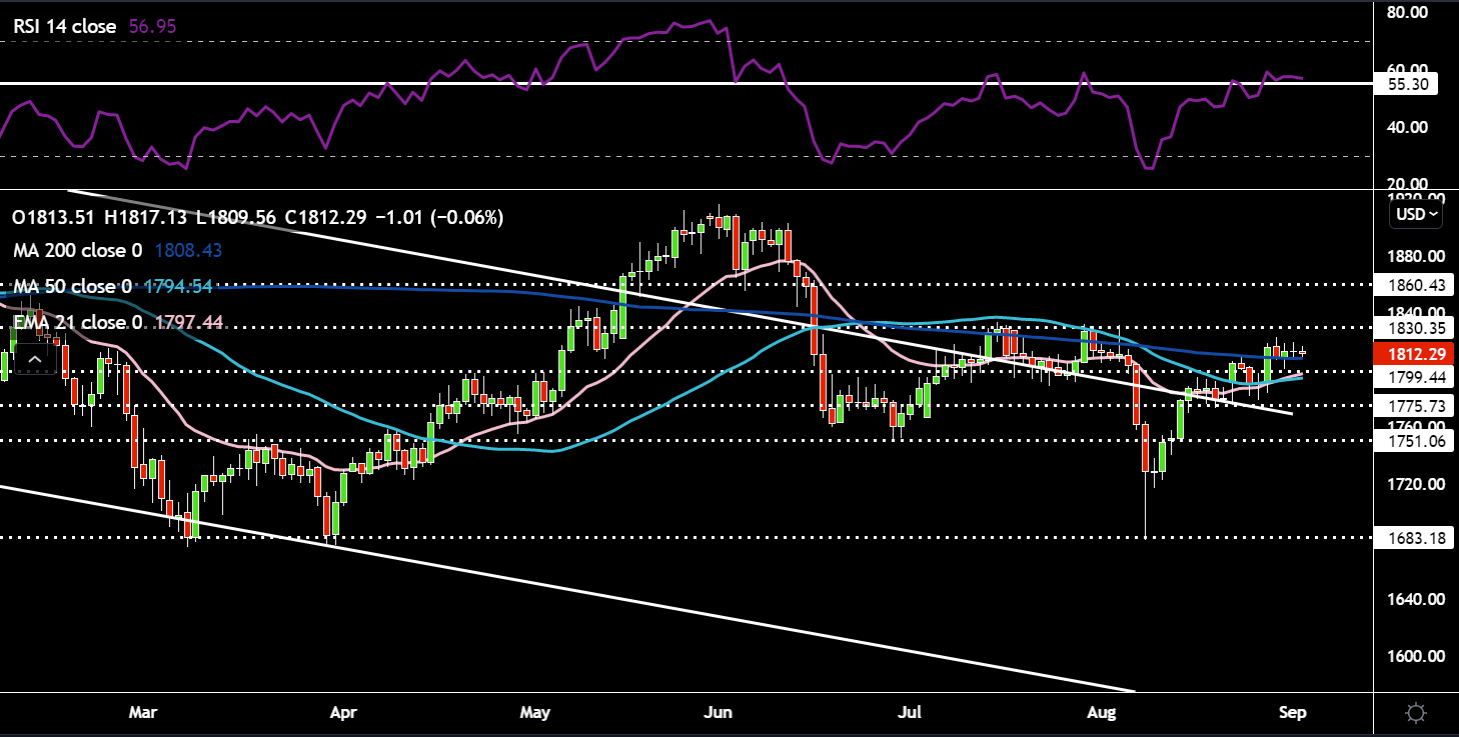 Gold is hovering just above its 200-day SMA. The 50-day SMA has turned back upwards, which begs the question if we could see that death cross reversed. The RSI is slightly above the 55 resistance level which marked previous tops. $1830 is key resistance as we saw a double top around this area. Could be setting up for a triple top? Tomorrow could give us the answer. Beyond $1830 if gold gets its bullish shine back, $1860 would be the next target on the upside. On the downside $1800 horizontal support with the 50-day SMA a tad below that would be important. Lower from there would bring the $1775 horizontal support into play as well as the upper trend line of the descending channel.

Ready to trade one of the many opportunities above? Start trading FX and Commodities CFDs now