The Daily Fix: Managing exposures as the event risk ramps up

Chris Weston
Head of Research
Share
Unsurprisingly our flow has been centred on the GBP, and most of this has been traded on the short side, with a counter-trend traders mentality kicking in.

The highly anticipated YouGov MRP poll has certainly helped the shorts, especially in light of comments from YouGuv’s director of political research, Anthony Wells, who stated, “based on the model we cannot rule out a hung parliament”.

The YouGuv poll found the Tories getting 339 seats vs 359 seats in the recent poll, with the result being cable losing some 60-pips. Although, consider the poll hit the market in the ‘twilight hour’, and the transition between the US into Asia trade, so liquidity isn’t as flash.

Granted, this still portrays a Tory majority but given what is already priced, and the rumours making their way through the desks of another strong uk through US trade, the actual outcome has resulted in some of the heat coming out a fairly frothy market.

Aside from moves in GBP, the SEK, CHF and EUR have worked reasonably well against the USD, with the USD index -0.2% on the day. We hurtle into the business end of the week, and things get real from here. The event risk starts tonight with US November CPI due out at 00:30 AEDT, with the consensus eyeing headline at 2% and core at 2.3%. With reflation one of the growing themes for 2020, higher CPI would certainly move this view along, so should core rise then we should see the likes of copper and the industrial metals complex getting some legs.

Focus on the FOMC meeting

We then head to the FOMC meeting at 06:00 AEDT, and while the market ascribes a 0.2% probability of a cut, it’s the tone of the statement that traders will be keying off. We can look further out at the rates curve and see 21bp of cuts priced in over the coming 12 months, and the market is fairly comfortable holding this view, even if the Fed will likely maintain its glass-half-full view, with its policy stance “likely to remain appropriate”. If I look at my basic ‘Fed consideration model’ and the key economic data points, and various financial markets, which we know the Fed have expressed a strong interest in before, the table is generally supportive of a Fed who will not rock the boat too intently. 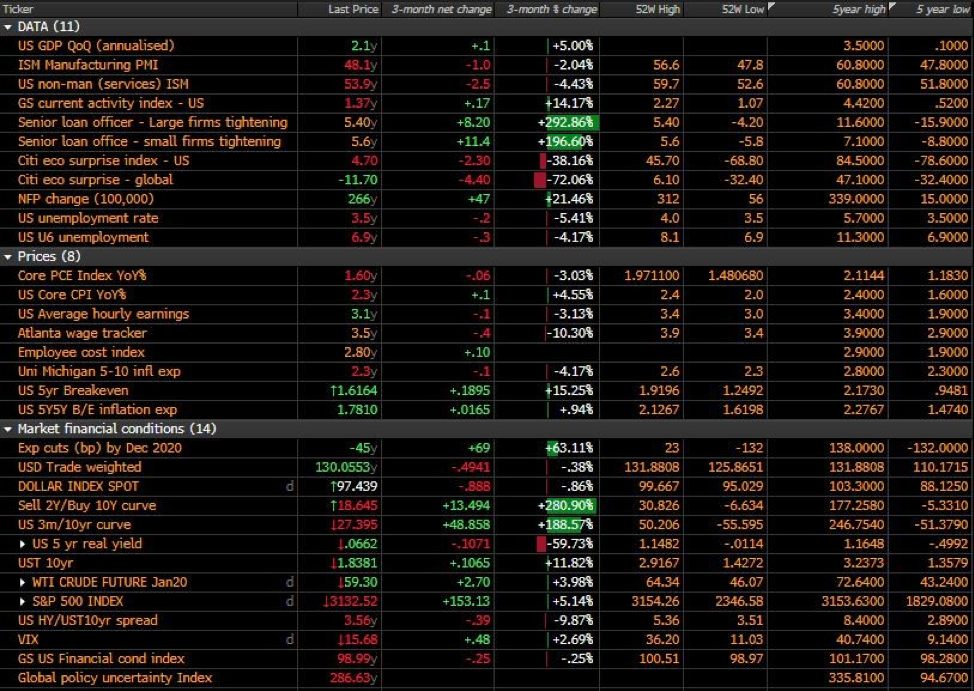 Of course, the Fed will be eyeing US-China trade developments, and this weekend’s tariff deadline will be on their radar, as it ours. Bloomberg has run an article suggesting the 15% tariffs that are due to kick in on Sunday will be pushed back, which is a view the market has held for a while, hence there has been a limited reaction to this from equities.

The Fed has cut rates three times as part of its ‘insurance’ policy and provided we don’t see further tariffs increases, then the central bank will feel they are in a good spot right now. There will also be a focus on the Fed’s role in the repo market, as there will be in the ‘dots plot’ projection, which is already indicating the medium view is for a rate hike in 2021 and another in 2020. The markets are yet to be convinced.

It all promises to be a fairly uninspiring open for Asia, and another session of assessing portfolio risk ahead of the key events. Equities should open on a modestly stronger footing, although it wouldn’t surprise to see tight ranges through the session. There is limited data to drive and Westpac consumer confidence will unlikely move markets, even the AUD which is far more focused on USDCNH. For those in NZD exposures, be aware of the NZ Half-Year Economic and Fiscal Update at 11:00 AEDT, and that traders have already warmed to the idea of the government presenting a raft of investment measures that could spur growth.